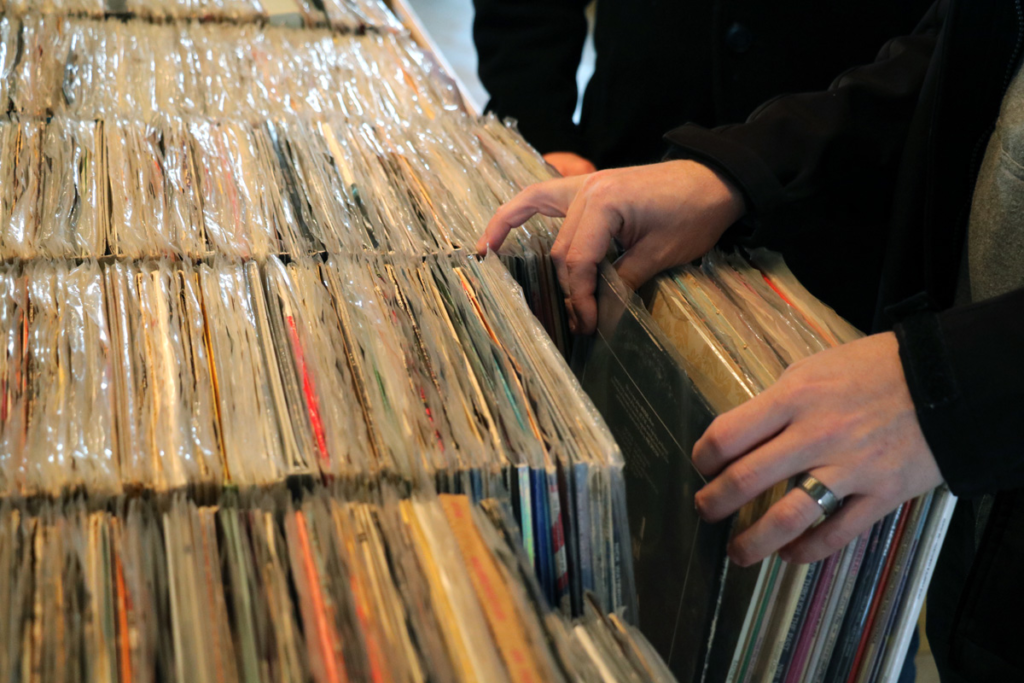 KC’s record shops were a busy delight Friday morning and afternoon. The Black Friday installment of Record Store Day might not inspire the sort of fervent capitalistic enthusiasm of its better-known April counterpart, but this particular cold gray morning seemed to keep people at home drinking coffee a little longer than usual.

It’s a shame, because coffee was on hand as I walked into Josey Records, the first stop on my trek. The employees might’ve outnumbered customers at a little after 9 a.m., but the selection was superlative. In addition to a healthy selection of Record Store Day exclusives, the shop had put out a fresh selection of recent used arrivals, which included scads of David Bowie and Fugazi albums. 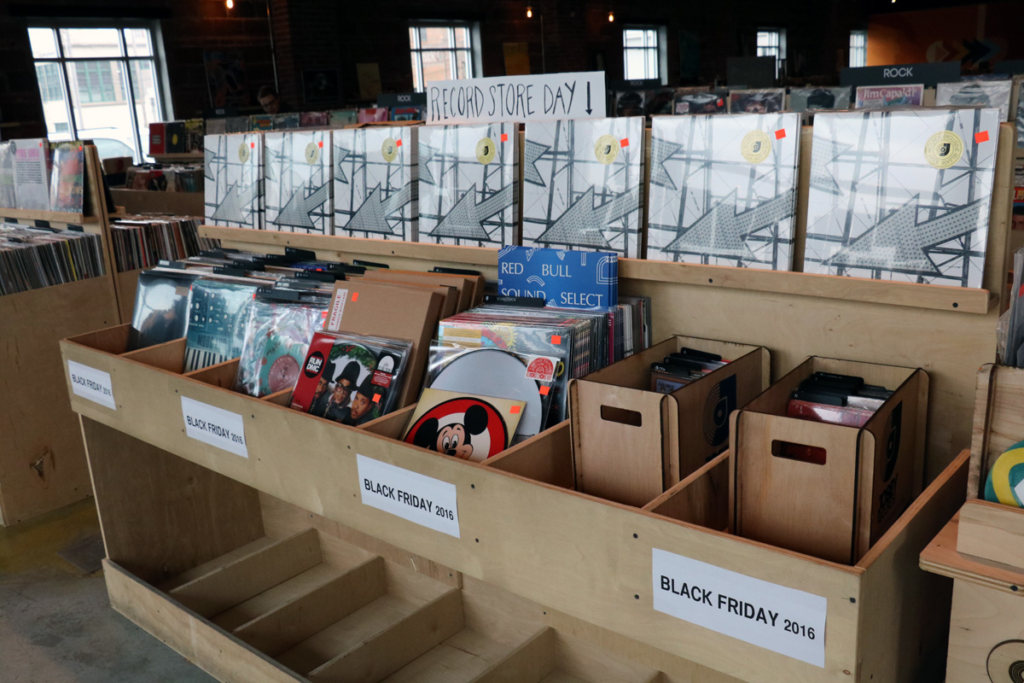 As a matter of fact, the store’s sound system cranked to life with Bowie’s Ziggy Stardust & the Spiders From Mars not long after I started poking around. If you’d like to keep me in your store longer than I’d planned, kick that sucker on, and I’ll stick around until it’s done. Thanks to that, I ended up with four LPs, the highlight of which was a sealed copy of Riz Ortolani’s score of The 7th Dawn (for just $5). Josey had put out a new vinyl compilation of local artists as a store exclusive as well, so that was in my stack: the third installment of this series, featuring the Greeting Committee, Freight Train Rabbit Killer, Barrel Maker x Ben Jones, and Thunderclaps. 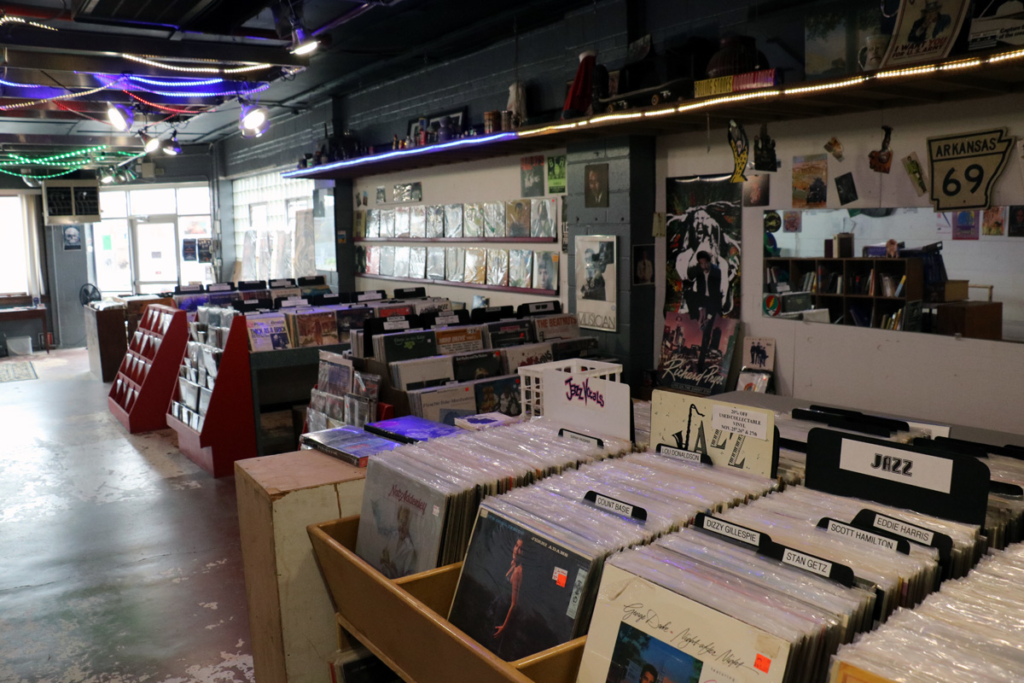 I stashed my stuff in the car and walked around the corner to Revolution Records, housed in the former Midwestern Music location on Locust. I was the only one in there, but the shop ran 20 percent off all its used LPs for the weekend, so I dug around for a little bit. There wasn’t anything I was hardcore looking for, I did manage to grab Quincy Jones’ score to In the Heat of the Night for (again) $5. 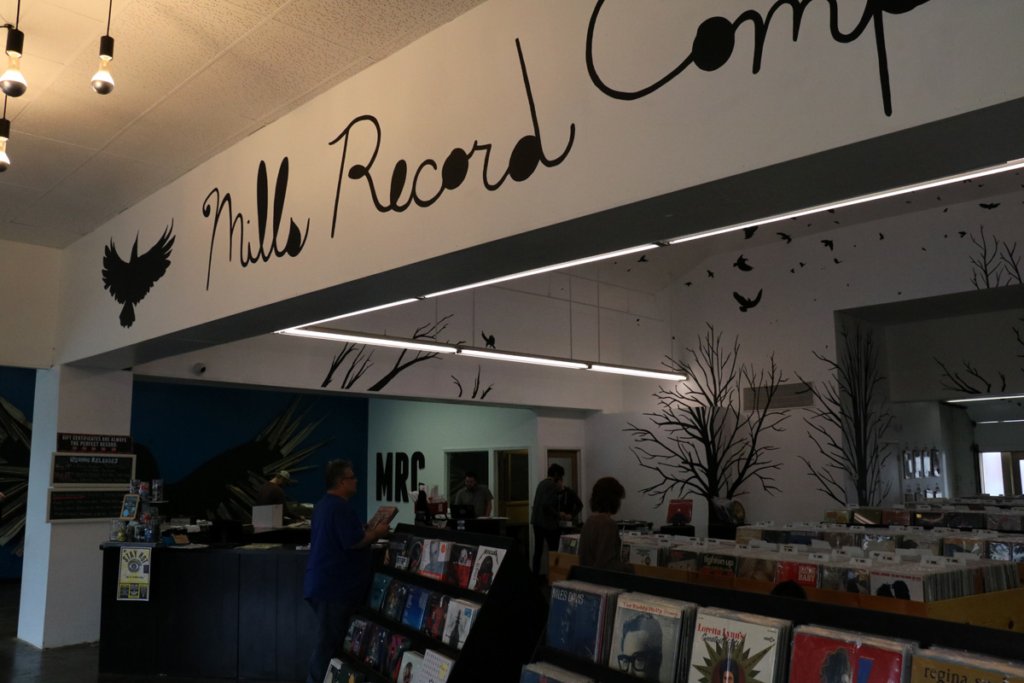 After that, it was back in the vehicle and over to Westport. I managed to find a rock-star parking spot right in front of Mills Record Company. Inside, I grabbed a cup of coffee and what appeared to be a red-velvet doughnut, and kind of gloried in the caffeine and sugar rush while watching a crowd of folks move in and out of the store, digging through bins and perusing an impressive selection of exclusives. I bought my one and only Record Store Day exclusive of the day at Mills — a remastered repress of the Chinatown score from Light in the Attic subsidiary Cinewax — as well as my second Dwight Twilley LP in as many hours.

While there, I also met up with the man behind the Blak Skul label, Sam Leimer, and picked up some of his releases, including the very excellent full-length from Phantom Head, to which I am listening as I type this up. You should absolutely go buy a copy if you like dirty rock and roll. My back seat was starting to fill up, and I’d hit just three stores. Down the road to Records With Merritt it was, though. 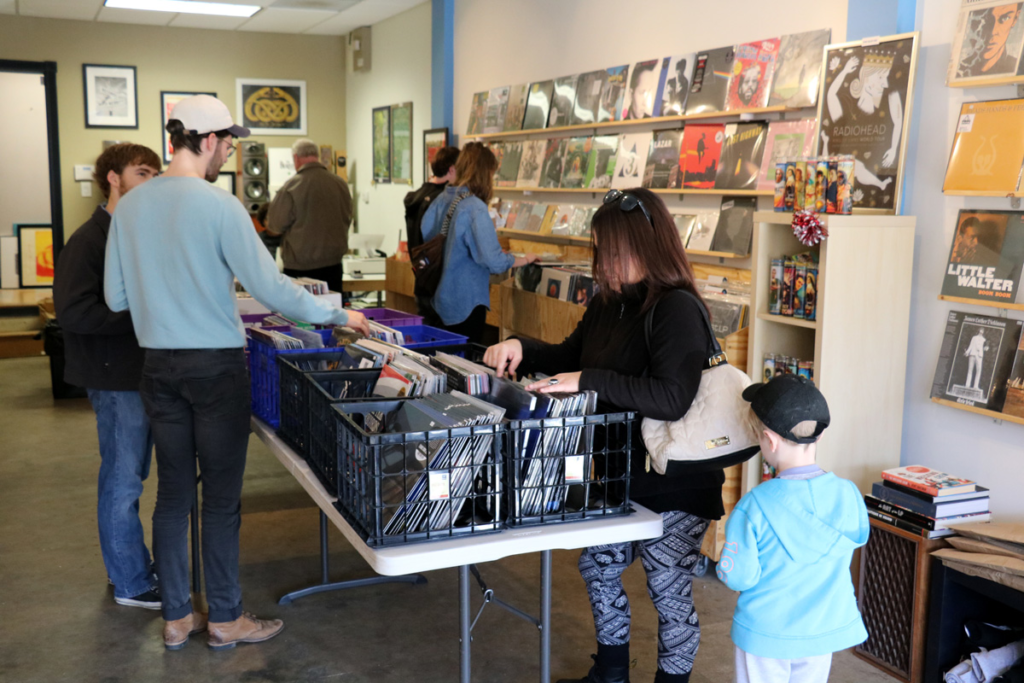 While I didn’t buy anything from Records With Merritt, it wasn’t for lack of desire. It had a slew of new releases not carried by any other store in the metro, including a healthy amount of obscure Italian film scores, a ridiculously integral jazz selection, and the usual special-event selection of snacks and drinks. It’s always difficult to move on from Records With Merritt, because I end up wanting to nosh and dig through everything. However, it was time to make the trip out to Johnson County. 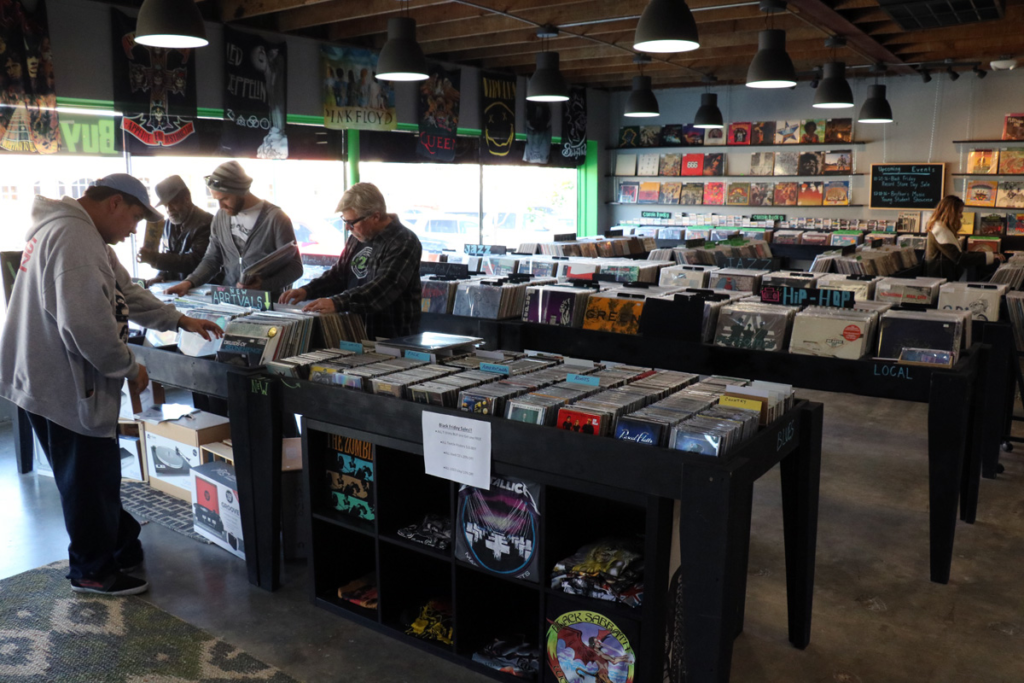 Brothers Music is a gem. An absolute gem. It’s just half a block from a Town Topic, and is a brightly lighted, friendly place. Located in Mission, the shop has a really varied selection. It’s heavy on classic rock, which is unsurprising for the ‘burbs, but the records on hand aren’t the usual beat-to-hell copies; they are instead clean and nice, and worth the extra couple of bucks you’ll pay. There are some gems hiding in the bins: While I walked out with some Kraftwerk and Mark Knopfler’s score to The Princess Bride, a young man next to me was elated to discover the Dead Milkmen’s Bucky Fellini, still in the shrinkwrap.

From Brothers, it was on to Vinyl Renaissance. Now, I’d never been to the shop’s Overland Park location, fearing that it was a little too upscale for me. Given the fact that the shop’s always carried high-end audio equipment, and now its location on Santa Fe also houses a wine tasting shop, I was afraid that I’d be unable to find a single record in my price range. The first things I spotted among the shop’s new arrivals were an autographed Mose Allison LP and a Nusrat Fateh Ali Khan album, both of which were incredibly tempting but far too rich for my blood. 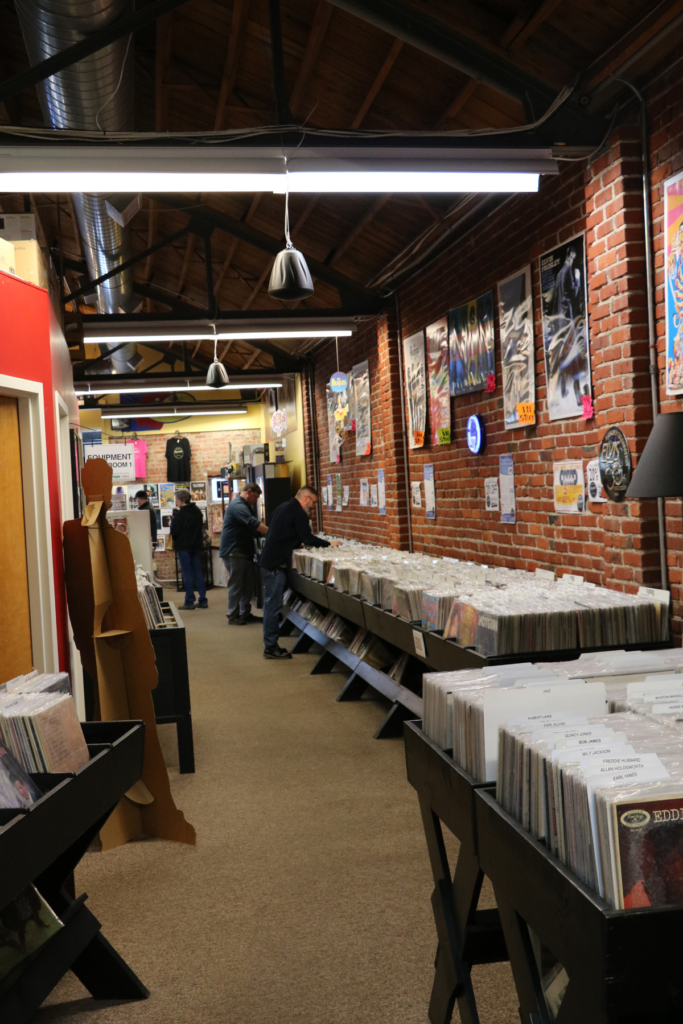 But then I turned the corner into the back half of the shop and discovered all the used LPs were 20 percent off, and within 10 minutes, I’d unearthed Krush Groove for $8, along with a swank Esquivel best-of. Bonus: free tote bag featuring Soundgarden’s Badmotorfinger cover art, convenient for hauling away my finds. The place was friendly, playing some wonderfully cool post-rock stuff, and is right next to the Peanut, meaning I’m going to need to schedule another trip out this way for record shopping and wings, post-haste. 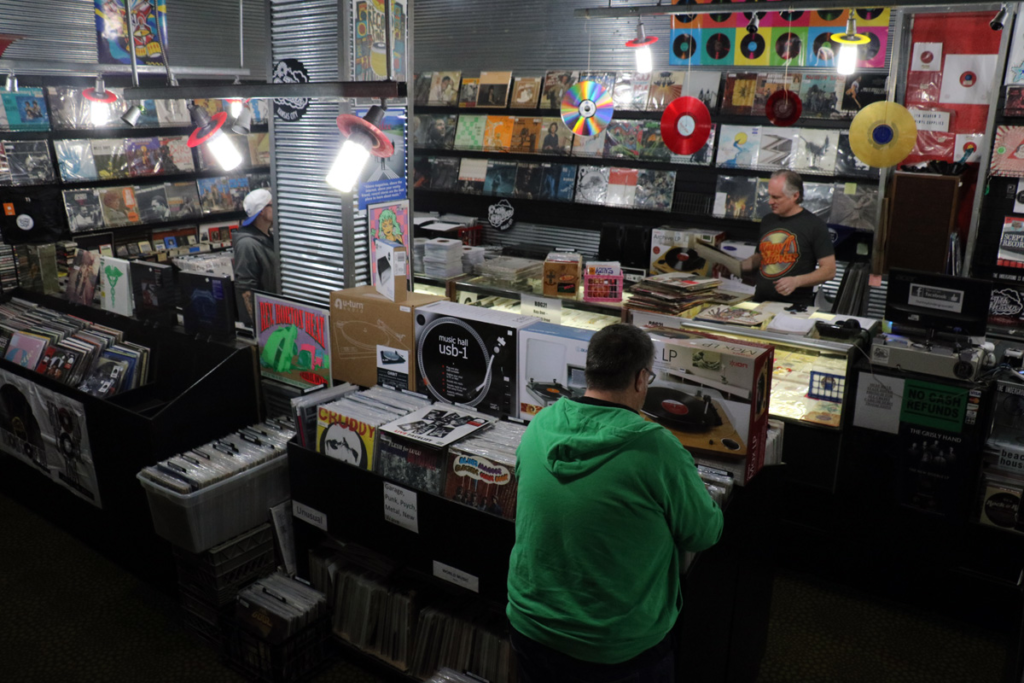 There was one last stop to make, and it was a bit of a drive from Overland Park, but man — the Vinyl Underground at 7th Heaven is worth any trip you have to make. The odd little section of the long-running head shop and music emporium is jam-packed from floor to ceiling with records, and the selection is insane. It’s heavy on funk, soul and R&B, and you could drop hundreds of dollars in minutes by just cherry-picking the featured records on the wall. I managed to walk out of there with a third Dwight Twilley record and Accept’s Balls to the Wall.

After seven record stores, a trip to the Westport Half Price Books, and a stop at Gates for a very late lunch of burnt ends and fries, I was wiped out and happy. Apologies to new store GotWhatULike and my hometown pals at Love Garden Sounds for not making it in, but I’d blown through my budget and then some, and it was time to get back home and feed the cats. Thanks to everyone I talked with — the shop workers and owners were all in positive moods, despite being busy and having their stock rapidly depleted, along with what seemed to be ever-ringing phones.

Not that anyone needs a special, artificially amped-up day to hit your local shops and help keep local shopkeepers in business. For some of us, every day can be Record Store Day.