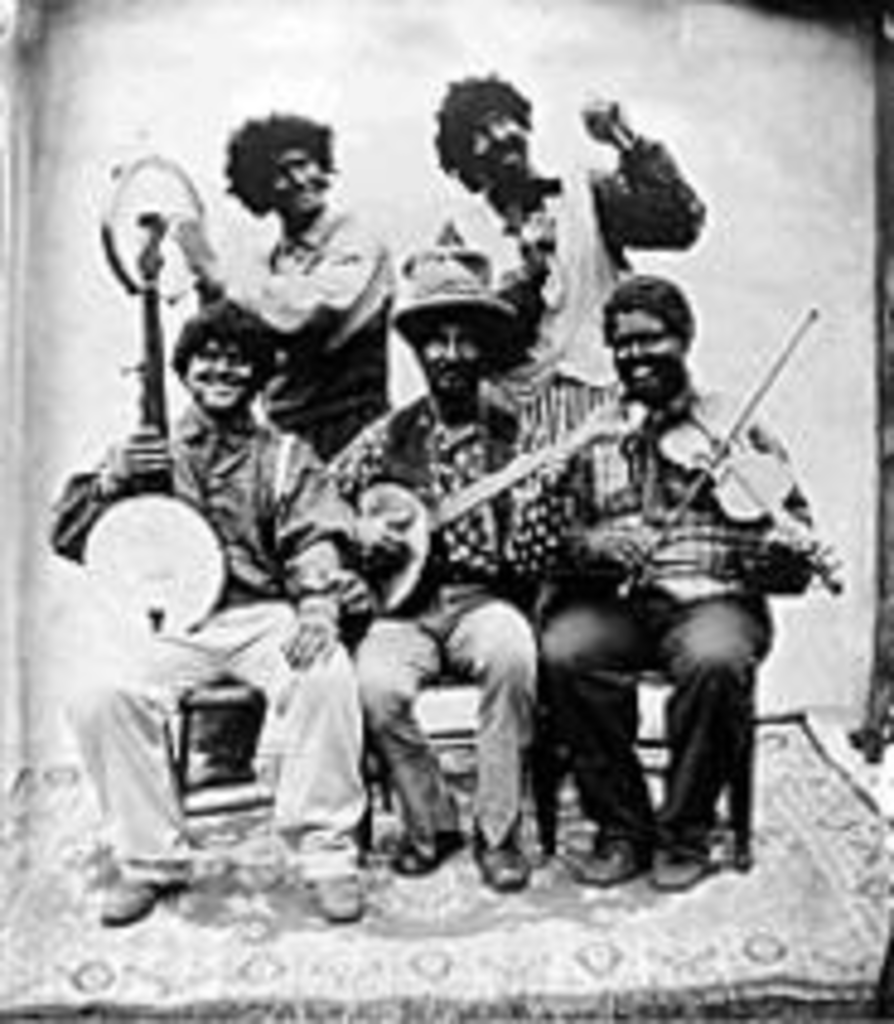 Daniel Partner plays old-school American dance music. He is also exceedingly particular about how authentically he presents it. Cast out your visions of a DJ spinning Detroit techno circa 1982 and fussing over a vintage Adidas tracksuit. Partner goes way, way further back than that. Call his the oldest school. He’s a banjo player who performs sheet music first published in the 1840s, written in the most infamous style to emerge from the United States: minstrel.

Minstrelsy was the first truly American pop-culture sensation. In the nineteenth century, white factory workers with free time and extra cash, courtesy of the Industrial Revolution, spent their spoils on minstrel shows — a hodgepodge of dancing, joke telling, singing and role playing performed by a string band made up of white men wearing black-painted faces and the ragged clothes of the poor. The aim was to reproduce life on the Southern plantation and perform the genuine music of the slave, often to Northern audiences with little or no contact with blacks.

Written off by most mainstream historians and musicologists as racist theatrics and overwrought melodrama, minstrelsy hasn’t merited serious cultural study since its awkward birth in the 1830s. However, a minuscule but steadily growing cadre of musicians like Partner intend to resurrect it. They diligently research yellowing sheet music and sepia-hued photographs to ensure absolute authenticity — from constructing period instruments and donning replicas of clothing from the era to performing old minstrel classics exactly as they were written, sometimes in blackface.

Of course, such an endeavor dumps directly into a briar patch of stereotypes repulsive to modern minds, and as a result, contentious debate has emerged over the legitimacy of this new minstrelsy.

The rekindling interest in the genre is still too tiny and peripheral to be called a movement, but some half-dozen bands perform semiregularly, and a couple even sell CDs. In addition to Partner’s group, the Free and Accepted Minstrels of Old New Orleans, there are also the Amoskeag Players from New Hampshire, the Second South Carolina String Band, and the Allendale Melodians, which proudly declares itself “the only blackface minstrel troupe in America.”

These entirely white groups perform almost exclusively for the so-called “living history” community: history obsessives who revel in reenacting periods of the past, primarily the Civil War. In fact, no minstrel musician interviewed for this article thought it should be played for general audiences; none of the musicians performed in blackface in front of anything other than a controlled, closed audience that had first received ample explanation of historical context.

Minstrelsy hung around in its original form until the 1950s. It was dusted off again in the mid-1980s by a pair of curious history-buff musicians.

Bob Winans, a banjo player and professor at Gettysburg College, had been studying the genre and wanted to hear its actual sound, but the zenith of minstrelsy predated recording technology. In 1986, he released the first — and, many say, best — modern-day recording of minstrel music, The Early Minstrel Show.

At the same time, Bob Kilham was a Civil War reenactor chasing the eternal quest to make the staged battles mirror reality as much as possible. That’s when he began researching the songs soldiers played around the campfire.

Kilham assembled a traditional minstrel lineup — banjo, fiddle, tambourine and bones (two rib bones or wood pieces played as percussion) — and called it the Amoskeag Players. The outfit earned some cash performing on the living-history circuit, and others soon followed suit.

Kilham and most other minstrel revivalists focus on re-creating the music and not the theatrics that accompanied it. Many of the original minstrel shows depicted African-Americans as silly, grinning buffoons who happily relied on “massa” for their survival. It’s an aspect of minstrelsy that Kilham and other amateur scholars on the subject believe shouldn’t be swept under the carpet, no matter how unsavory it can be.

“Yes, we have done blackface minstrel shows for closed audiences as an experiment, as a case study,” he says. “We borrowed a guy’s 1850s schoolhouse, turned it into a theater and invited all our museum friends — people who would understand what we were doing. We put a caveat out: CEListen, this is what we’re doing, it’s a historical thing, be prepared. When we sing the songs, we use the original lyrics, so be advised the N-word is coming at you. Don’t shoot us.’ Because remember, when this stuff was written back in the 1850s, the Dred Scott case was arguing whether blacks had a soul or not. That’s the culture this was coming from.”

Caveat or no caveat, Vanderbilt University musicologist Dale Cockrell thinks minstrelsy should never be performed in its original format. “It seems to me that to perform minstrelsy now is going to perpetuate stereotypes that are coarse, crude and offensive to many people,” he says. “Minstrelsy is extinct, and it’s rightfully extinct, and to give representation to the stereotypes — frankly, I find it immoral and appalling. I know the reenactors are fanatical about being authentic, but you’ve got to draw the line somewhere. You don’t use live ammunition when you reenact battles, and this is ammunition that simply shouldn’t be loaded.”

Daniel Partner has performed in blackface and believes in being as faithful to the original spirit as possible, though he’s willing to make certain alterations. “The thing about doing this music accurately, in music and presentation, is that there’s a power that’s difficult to explain,” he says. “And I don’t think we should revise or omit our history — I think we should face our history. But you do have to watch out about the word nigger. In a historical context, or when you can explain it to audiences, you can use that word. But often I’ll change it to something like feller.”

Often, revising components of minstrelsy that offend modern sensibilities can unintentionally remove the radical flavor of the original music. Most minstrel lyrics were written in what was imagined by the white songwriters to be slave dialect: lots of Massa gib me dis and Martha goes a-runnin’. Replacing the dialect with “proper” English could erase the historical significance of songwriters attempting to speak from the slave’s perspective, an unheard-of of concept at the time.

Joe Ayers, a musicologist and banjo historian, points to an easily overlooked aspect of minstrelsy: These shows didn’t involve white men going onstage merely to tell jokes about blacks; they were incredibly elaborate attempts by white men to become black. Minstrel troupes would compete to see who could provide the most authentic portrayal of Southern black life, with some white performers even living on plantations to learn firsthand.

This was the genesis of the Elvis and Eminem instinct: the great white devotion to, and appropriation of, black culture. Minstrelsy paved the way for the transmission between European and African sounds that fed directly into jazz and rock.

“One remarkable thing to remember about this music is that the banjo was an African instrument,” Ayers says. “So some of these Southern players actually learned to play it from their fathers’ slaves. That means a white man had to be willing to apprentice himself to a slave. You must understand that slaves were considered nothing back then — they were bought and sold like cattle. So for a white man who was free and powerful to apprentice himself to learn that instrument is just mind-blowing.”

On further scrutiny, the interplay between blacks and whites in minstrelsy rarely looks as, well, black-and-white as it does initially. The first professional black musicians in America often came up through minstrel troupes, even wearing blackface, which creates a dizzying racial house of mirrors, black men imitating white men imitating black men. Bessie Smith, the Empress of the Blues, began her career in minstrelsy. Ayers even argues that the Beatles were a minstrel group, a four-man string band with a heavy rhythm section that stole from blacks.

If that’s correct, the issue then boils down to what place the performance of authentic minstrelsy has today. Because no matter the audience, the fact that a band such as the Allendale Melodians blacks up for a gig is going to offend people, even if its performance is intended as a warts-and-all history lesson.

Perhaps that’s the defining quality of minstrelsy: its power to stir emotions some 170 years after its creation.

“Unlike a lot of old music, such as ragtime, this music is still edgy, it still cuts, it still makes you nervous,” Partner says. “Because it’s dealing with America’s main issue, which is race, an issue we’ve never been able to figure out.”