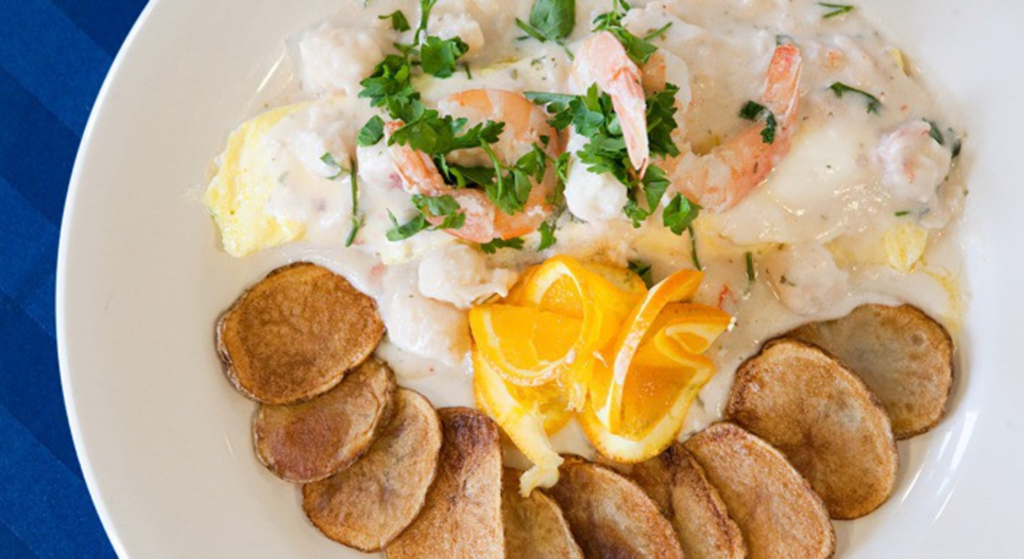 I’m willing to bet that most people reading this have never heard of a restaurant called Bistro La Scala. It’s a very strange little dining room inside a very odd little hotel on a very misbegotten stretch of Metcalf. I’m not even sure how I found it, but I’ve eaten three pleasant meals in the restaurant.

The place has a real chef — New Orleans native John Christopher, formerly of Soho 119: The Restaurant, in Leawood — and an ambitious menu. Too ambitious, maybe. The bistro is located in a hotel with such pretensions that anything seems possible.

But this restaurant’s survival depends on its ability to attract a lot more diners than I saw. On two occasions, my friends and I were the only customers. The dining room was silent except for the occasional sound of that ringing chime from Wheel of Fortune, which was playing in the closet-sized lounge across the hall.

Bistro La Scala is inside the Clarion Plaza Hotel — a name that evokes both the Country Club Plaza, about 20 minutes away, and the legendary New York City lodging house. Yet this might be the metro’s least assuming hotel. Back in the 1980s, this hostelry was a Rodeway Inn. In more recent years, it operated as a Wyndham Garden Hotel. Last month, the owners signed on with the Clarion Hotel chain. And if the building weren’t painted a bold coppery-orange, you probably wouldn’t even notice it.

Most corporate-managed hotels are required to have a dining room to provide amenities such as room service and lunch meetings. But in this day and age, a modest inn like the Clarion Plaza Hotel is lucky to have a coffee shop. And if John Christopher weren’t in the kitchen, this attractive, intimate dining room probably would be a coffee shop.

But Christopher has talent, and his menu dreams big: beef filet with fresh risotto; lasagna stuffed with lobster, clams, crab and shrimp in a lobster cream sauce; a New Orleans-inspired Sunday brunch with airy beignets, eggs Sardou, and crêpes Suzette.

The problem here is that no one seems to know what Christopher is trying to pull off, including the rest of the hotel staff. On my first visit to the restaurant, my waitress was also the hostess. The female bartender stopped over to visit after the “bar crowd” — five people — vanished when she gave them directions to the Argosy Casino. “I’m bored,” she explained.

On my second visit to Bistro La Scala, the bartender — a different woman, with bee-stung lips and a voice to suit a 1930s Warner Bros. character actress — was also our waitress. Luckily for her, there was no one in the bar and no other customers in the dining room. Still, she managed to write down the wrong dinner for one of my friends. “I get flustered,” she told us.

At one point during that meal, my friend Bob became convinced that we weren’t in a real restaurant at all but a staged dining room with hidden cameras capturing footage for a reality program. And just what kind of reality this restaurant exists in would make for an interesting show.

In this suburban twilight zone, the chef makes command decisions. The night I dined with Jeanne, Alexandra and Roxanne, we each ordered different salads but were served one large salad in a big bowl and given four side plates. I was able to overlook this eccentricity because the dinners were good — really good. The seafood lasagna was divinely, ridiculously rich, and the buttery Alfredo sauce on one of the pasta dishes was nearly perfect.

Christopher came out of the kitchen frequently to chat with us. Why not? He didn’t have anyone else to cook for. That scene repeated itself a couple of weeks later when I returned with Bob, Laurie and Chip. Bob has a phobia about eating in an empty dining room — “It’s a bad omen,” he insists. But he grudgingly agreed to stay and eat anyway.

That happened to be the week when the hotel stopped serving lunch. “It was a business thing,” said the woman at the front desk, who was also one of the bartenders and, I was told later, one of the hotel’s owners. (There’s a Petticoat Junction element to this hotel that’s kind of endearing.)

We received individual salads that night. The house salad’s artful arrangement of greens was as pretty as a picture but not nearly as tasty as it looked. My Caesar might have been a success had it been tossed. Instead, a spoonful of dressing lay hidden in the center of a pile of romaine.

Bob waxed eloquent about Christopher’s chicken Marsala — the moistness of the bird, the nutty sweetness of the wine reduction, the plumpness of the mushrooms. He called it the best version of this dish he’d ever eaten, even better than a dinner in Rome. I didn’t taste whatever Bob ate in Italy, but the Marsala at La Scala was indeed something special. My own meal was less thrilling: a bowl of house-made gnocchi, bobbing in a shiny balsamic reduction. The sauce overwhelmed the dumplings so much that, at first, I thought I’d been served the wrong dish.

Laurie had her heart set on the steak with the gorgonzola cream sauce but was mistakenly given a lobster-stuffed hunk of beef on a swirl of risotto — excellent, creamy risotto — and drenched in a paint-thick lobster cream sauce. Christopher’s menu describes Chip’s meal, pesce negre e piccata (misspelled picatta on the menu) as blackened tilapia, but it was simply pan-seared and draped over a mound of penne and corn-tomato relish.

There were four featured desserts on the menu, including tiramisu, but Christopher insisted that we sample his latest invention, a warm fruit compote — pineapple, grapes and cherries — topped with crushed biscotti crumbs. Very rustic but no la dolce vita.

And then there was brunch. Christopher is justifiably proud of his dejeuner menu: seven French-inspired omelets; eggs Benedict, Sardou, Oscar and Christophe; five crêpes (including the hard-to-find Suzette, made with Grand Marnier, fresh orange and buttery caramel); and “handcrafted” beignets.

The folly of this ambitious brunch might work well in a more cosmopolitan setting, but the Clarion Plaza Hotel, I’m sorry to say, is not it. My friend Franklin and I walked into a dark, empty dining room at 12:45 p.m. and turned to leave when, suddenly, we heard the clatter of pots and pans in the kitchen. I peeked in, and there was Christopher, mixing up beignet dough. He seemed shocked to see customers but demanded that we stay.

We settled into a banquette and sipped coffee while a reveille of clanging pots and pans regaled us from the kitchen. “What is he doing in there?” Franklin asked.

He was making our eggs Benedict, as it turned out, which were perfectly acceptable with a gorgeous, lemony hollandaise sauce. Later Christopher returned with a plate of sugar-dusted beignets.

“He’s a trouper,” Franklin whispered. “If it had been me, I would have told us the dining room was closed and called it a day.”

But Christopher takes his role — and his restaurant — seriously, even if no one else in the hotel or this neighborhood yet appreciates his passion and hard work. He deserves credit for caring so deeply about his food and his customers. The wheel of fortune is spinning for this unusual restaurant, so if you’re going to eat at Bistro La Scala, go sooner rather than later. It needs a little fortune.