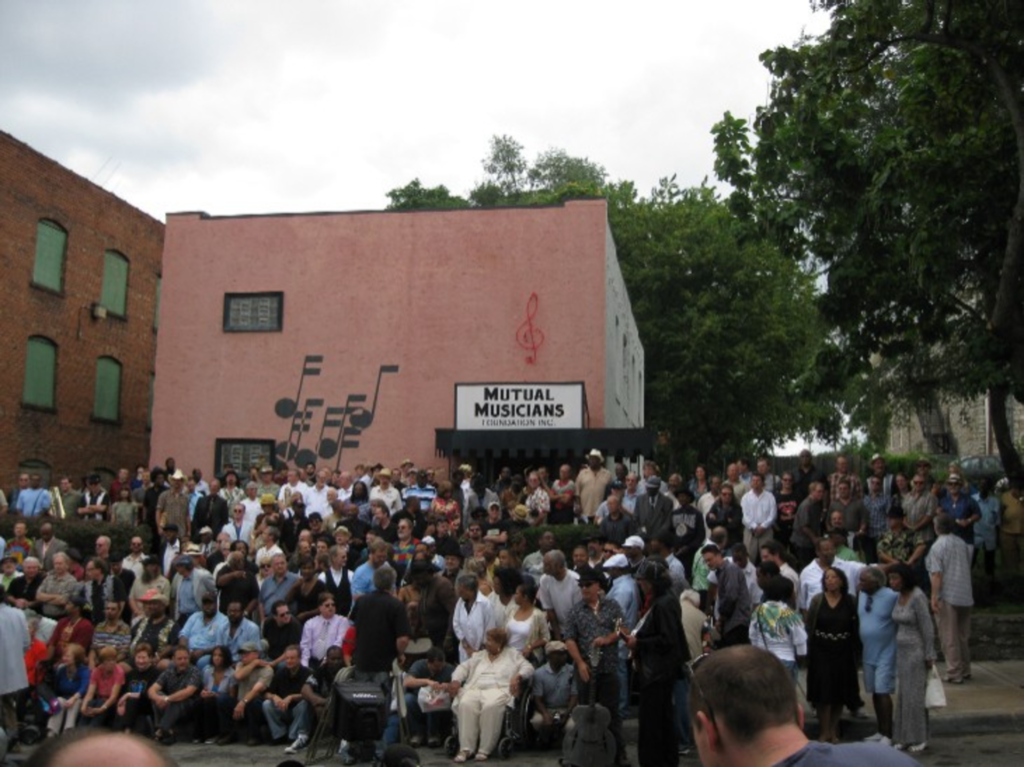 When it came to celebrating Charlie Parker‘s birthday on Saturday, August 29, Kansas Citians had two main options: the First Annual Kansas City Yardbird Jazz & Film Festival at the American Jazz Museum and, just around the corner, the Bird Lives Festival at the Mutual Musicians Foundation.

Many people might have thought the two events were part of the same festival. But the sad truth is that the Kansas City jazz scene can’t even put on a unified celebration of its most influential native son’s birthday.

The Foundation’s independent, shoestring-budgeted Bird Lives Festival began at noon with a group photo starring 250-plus area jazz and blues musicians. Stalwarts like Ida McBeth, Myra Taylor, David Basse, Everette DeVan and scores of others young and old, dressed up and dressed down, lined up in rows in front of the pink building that has housed the Musicians Local 627 since time immemorial. Smoking cigarettes and joking like old pals, they smiled for the camera. Many were reenacting a scenario they had participated in 10 years earlier.

The man behind Bird Lives and the photo shoot, Dawayne Gilley, had arranged a similar group shot on September 18, 1999. He’d been inspired both by Art Kane’s famous Harlem 1958 photograph of jazz greats (immortalized in the ’95 documentary A Great Day In Harlem) and by a 1930 photograph of Kansas City jazzers that hangs inside the Foundation.

They blocked off Highland Avenue, set up stands for vendors to sell barbecue and beer, hung commemorative banners on lamposts and booked bands to play inside and outside the Foundation for the better part of 24 hours.

During the day, on a stage in the middle of the street, the likes of Luqman Hamza, DeVan, newcomer Hermon Mehari and Lonnie McFadden got down for a crowd of 200 or so. Around 8 p.m., the jamming moved inside and continued until the wee small hours, peaking at midnight when Bobby Watson played Parker for KCUR 89.3 FM’s 12 O’Clock Jump live radio broadcast.

The party at the Foundation continued on Sunday with a fried chicken dinner at 2:30 p.m. (after a saxophone salute at Parker’s grave in Lincoln Cemetery) and more live music.

In short, Gilley, Crow and the fine folks at the Foundation put on a small but splendid tribute.

Meanwhile, it seemed like just another day at the American Jazz Museum.