Portrait of Ben Baker via benbakerformo.com

Representative Ben Baker of Neosho introduced House Bill 494 on Dec. 20, which would make performing in drag—in any venue minors could access—a class A misdemeanor. Repeat offenders would face class E felony charges, carrying with it a maximum sentence of four years in jail.

Baker’s bill defines an “adult cabaret performance” as “a performance in a location other than an adult cabaret that features topless dancers, go-go dancers, exotic dancers, strippers, male or female impersonators who provide entertainment that appeals to a prurient interest, or similar entertainers, regardless of whether performed for consideration.”

The “average person” is doing some heavy lifting in its assumptions for a legal definition. Certainly, a substantial portion of the population in Missouri has seen, and probably enjoyed, an episode or two of RuPaul’s Drag Race, we assume.

Drag performer, pageant queen, and clarinetist Tajma Stetson would disagree with Baker’s classification of drag shows as “obscene” and lacking value. Stetson says, “showing a child a broad perspective can help them be a well-adjusted adult. It shows them that acceptance for others is best in all facets of life and will better equip them for happiness and for interpersonal success.” 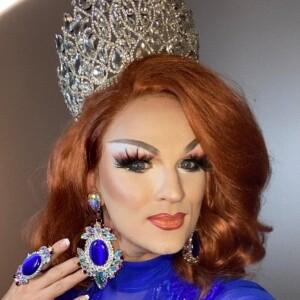 Stetson is known in Kansas City for performing as part of the Jazzagals drag jazz trio at Johnnie’s Jazz Bar and Grille alongside drag artists Daisy Bucket and Christa Collins. House Bill 494 would prevent drag performances in such restaurant venues, since minors could be in attendance, though the drag performance in question does not meet Baker’s definition of an “adult cabaret performance.”

Drag is about expressing oneself, not about exhibiting explicit sexuality. Young audiences can benefit from experiencing the diverse and inclusive atmosphere of drag culture.

Stetson says, “Drag is, by definition, self-expression in the boldest way and has acceptance built in so for young audiences to see it, enjoy it, and validate it, adds real value to their broadening perspectives.”

House Bill 494 is not Baker’s first bill attempting to limit the accessibility of drag performances to young audiences. In 2020, Baker authored and advocated for House Bill 2044, the “Parental Oversight of Public Libraries Act,” which would have outlawed drag queen story hour events from public libraries, had it been passed.

However, Baker has since revised his stance on drag queen story hours. In an interview with the Kansas City Star, Baker says “They [drag performers] could still have a show and if it didn’t have, you know, nudity or partial nudity, as already is outlined in statute, or any of those things, then they can still have one. Like a drag queen story hour, for instance, as long as they weren’t performing in those type of ways or reading from materials that contained that kind of content.”

According to 2022 data collected by The Nation’s Report Card, only 30% of fourth grade students in Missouri tested “proficient” in reading. Protecting any public program that promotes childhood literacy should take priority over panic about indoctrination.

Though Baker has backpedaled on his drag story hour stance, he remains staunchly opposed to minors viewing drag shows, and seems to assert that drag performances are inherently sexually obscene. Currently, he has the Star story pinned on his Twitter account with the commentary, “Don’t have obscene performances and invite kids to watch or participate. It’s really simple. Protecting the innocence of our children is a good thing.”

Missourians who wish to support drag performers and their young fans can reach out to their local Representatives and voice their opinions. Support can also be shown by attending local drag shows, such as the variety of weekly offerings at Hamburger Mary’s, which allow audiences of all ages.