Big Rip Brewing Co. barrels into the future with a new brewing system, a beer garden and a beer fest 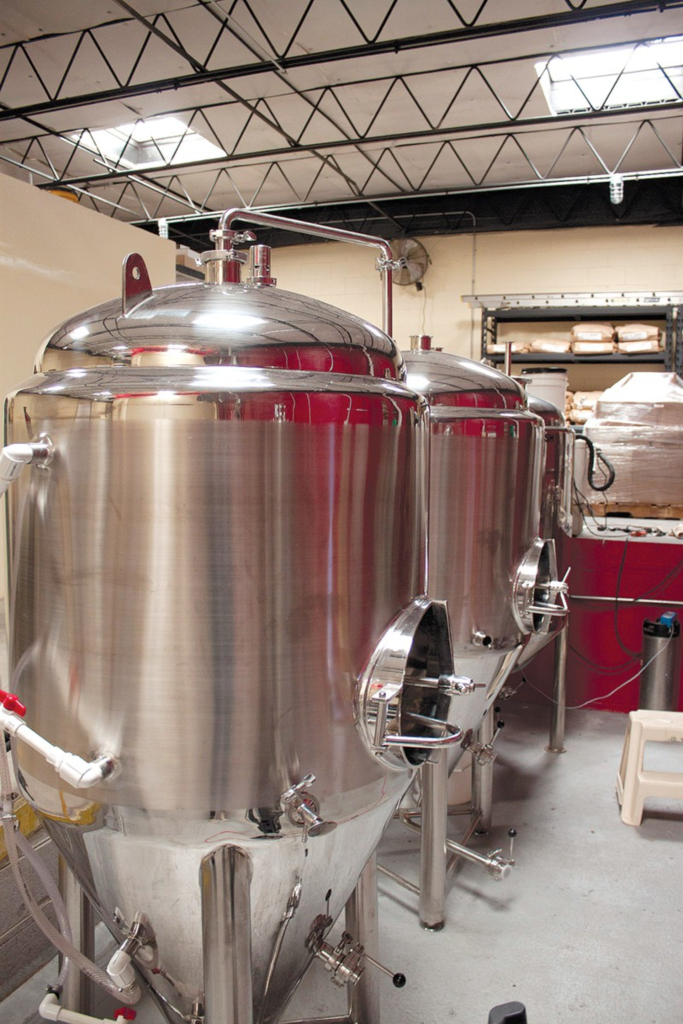 Big Rip Brewing Co. founders Josh Collins and Kipp Feldt love horror movies. You can tell as soon as you step into their taproom, at 216 East Ninth Avenue, in North Kansas City. Posters from Friday the 13th, Evil Dead and Aliens hang on a wall, along with an “I want to believe” UFO poster that should look familiar to anyone who watched The X-Files. A glance up at the skylight reveals a translucent biohazard logo from 28 Days Later.

And those are just the decorations. Big Rip’s brews also make reference – sometimes obscure – to twisted cinema. The Pennywise Sweet Potato Ale is named for the sewer-dwelling killer clown of Stephen King’s It. Franklin Road Coffee Porter name-checks the cemetery road in Night of the Living Dead. And the pale ales call back to Sam Raimi’s Evil Dead trilogy, especially Army of Darkness.

Collins and Feldt have even named their tanks Mulder (for David Duchovny’s X-Files hero), Ash (Bruce Campbell’s boomstick-toting Evil Dead protagonist) and Ripley (Sigourney Weaver’s alien-slaying badass). And those names are carrying over to Big Rip’s new four-barrel brewing system – an upgrade from the two-barrel system they started with last May.

“We’ve been maxing out what we can produce,” Collins tells The Pitch. “Even though we’re only open three days a week [Friday, Saturday and Sunday], we’ve been selling out of beer. So we had to shut down a few times to keep up.”

The new system arrived March 20, and within a few days, Collins and Feldt were already brewing a batch of hefeweizen. The increased production also has meant more spent grain needing disposal. Big Rip donates it to a local farmer, who uses it to feed her cows and chickens.

“Now that we’re growing, she’s actually planning on expanding her farm,” Collins says. “She’s never had pigs, and I guess they eat a lot. So now she’s going to get some pigs because we’ll be able to provide her with twice as much grain.”

The naming system may be consistent, but Big Rip’s beer list is all about change. The only staple is the brewery’s flagship: Hathor’s Sweet Brown Ale.

“We just like making a variety of beers,” Collins says. He and Feldt brew whenever they can find time away from their day jobs (in Web design and programming). “We’ve done over 20 recipes since we opened. Anytime you come in, there’s going to be new beers.”

Collins says they plan to brew a banana cream ale and a bacon beer in future batches, possibly in time for Big Rip’s anniversary party and brew fest May 17.

Tickets may go fast, though; Collins says they won’t oversell the event, limiting sales to 200 tickets ($25 for “Mug Club Members” and $35 for everyone else).

“We’re going to keep it small because no one really likes waiting in line,” Collins says. “I think we’re going to limit it to 15 or 20 people per brewery that attend.”

Before the party, there’s still work to be done. Big Rip’s exterior had already been painted a dark, blood red by the time The Pitch visited in late March. A beer garden was under construction near the brewery’s back door. Collins expects the beer garden to be finished by mid-April. But the patio, meant to seat about 50 people, won’t open until Big Rip’s upgraded liquor license is approved.

Once the garden opens, the idea is to book bands every month. And soon Big Rip’s patrons will be able to eat Mexican food from El Burrito Loco, which is opening in the former KC SmokeShack BBQ space. If all their bright ideas are this sunny, Feldt and Collins may finally run out of terrifying names to call their endeavors. But probably not.