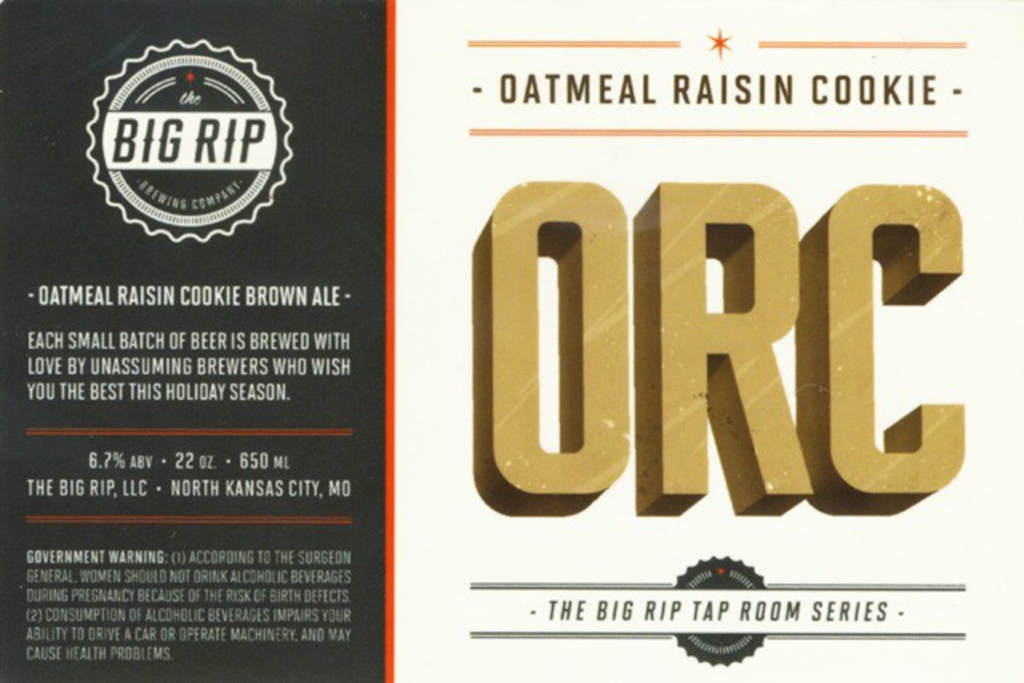 Big Rip Brewing Co. is getting into the bottle business. The North Kansas City brewery will begin selling its beer in 22-ounce bottles starting on Christmas Eve from 9 a.m. to noon. The first beer to be bottled is ORC – Oatmeal Raisin Cookie – brown ale, which will be available in bombers as well as on tap and in growlers.

Josh Collins, one of Big Rip’s founders, showed off a roll of ORC labels and a pallet stacked with cases of the bottles on a mid-December Wednesday afternoon.

“We’re going to do a really small run just to get our processes down,” Collins says. “So we’re probably going to do 10 or 12 cases of the first 22-ounce bottles to see how that goes with Oatmeal Raisin Cookie. Then, down the road, I’d say a max of 20 cases per batch and a minimum of 10.”

ORC will be a rarity in that future beers in Big Rip’s “Taproom Series” of bottled beers will only be available in bottles.

“We’ll do like limited edition Delta 88 with mangos,” Collins says. “So we may have Delta 88 on tap, but we won’t have the mango IPA on tap. We’ll just have it in bottles. People would be welcome to crack them open here or take them to go.”

Collins says bottling and filtering the beer will allow Big Rip’s beer to last longer as opposed to growlers, which Big Rip still fills out of its taproom.

“If they want to drink it six months later,” Collins says of the bottled beers, “they can.”

Another Big Rip beer planned for bottling is Twin Cherry Cheesecake, which Collins describes as a Kölsch-based beer with “an obscene amount of tart cherry juice in it.”

“It ends up almost like a Flemish,” he says.

Collins says if the bottling experiment goes well, there’s a chance Big Rip could begin distributing on a small scale in a handful of liquor stores on the Missouri side of the state line.

“This is the pilot to that,” he says.

Depending on the beer, expect to pay about $10 for a bomber.

Big Rip is also starting a small-scale barrel-aging program with two pinot noir barrels and a rum barrel. Collins says the plan is to sour Hathor’s Sweet Brown with added cherries into one of the pinot noir barrels. The other pinot barrel is earmarked for an imperial coffee porter. And Collins says a scotch ale could be the plan for the rum barrel.