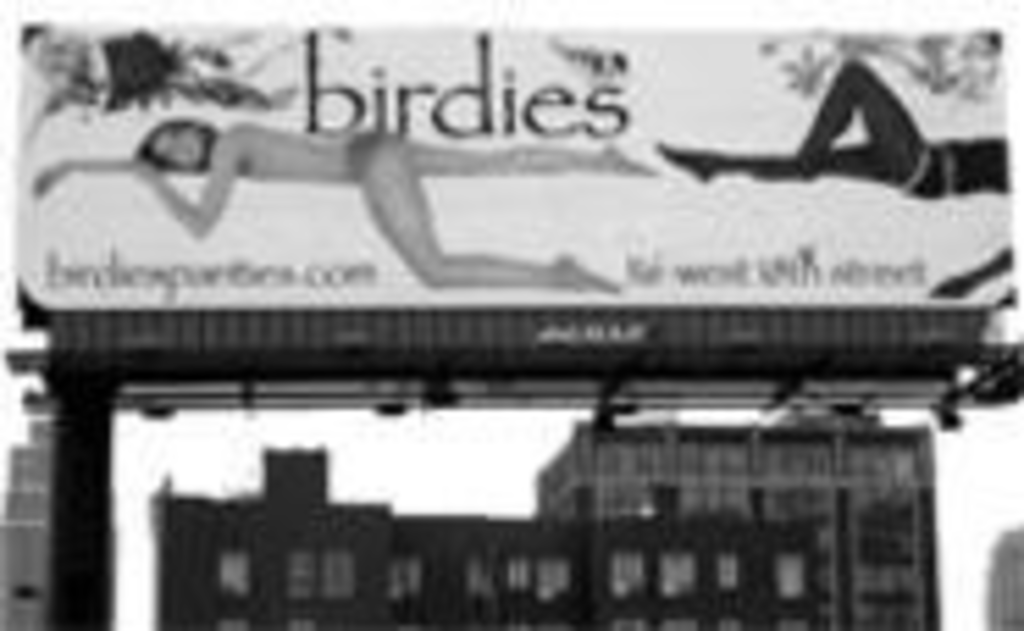 It’s not as if anyone expects billboards to dazzle with their beauty. Then again, we could do better.

Nike has started sponsoring artist-made billboards that don’t advertise shoes at all; as a result, some beautiful work by the Brazilian street-art team known as Os Gemeos floats above the Los Angeles skyline. Panama City sponsored a public art program in which teams of artists from the city and surrounding areas made billboards that expressed something about the state of local affairs; this created art as well as international dialogue. Part of the current show by Egyptian-born artist Ghada Amer at the H&R Block Artspace is her work for that project — illustrations of relevant Chinese proverbs.

The Kansas City Art Institute has taken on billboards, both in the city and on the façade of the H&R Block Artspace, where Jenny Holzer’s memorable “Protect Me From What I Want” acted as a powerful contradiction to most advertising billboards. Yet in general, billboards are pure visual clutter. Boring. Shameless.

Remember the Helzberg Diamonds billboard campaign depicting a guy giving his lady a present and being handsomely repaid with a passionate kiss? Remember the one for Abercombie & Fitch in which a very young man lies prone in shorts, one knee up, his hand suggestively inching through a hole in the fabric?

Peregrine Honig does, because those campaigns are part of what inspired her and her panty-store co-owner, Corrie Van Ausdal, to put up their own Birdies billboard.

Inspired not in the positive sense but in the negative sense. Inspired to do something different with one of those giant canvasses in the sky.

“Corrie and I had always wanted a billboard,” Honig says. “Not necessarily for business reasons but because it seemed like something cool and fun and public.”

It was the duo’s frustration with so many existing billboard campaigns that pushed them to really get working on it, though.

To raise enough money to put one up, they threw a panty auction back in April at Harry’s Country Club. (The event was so successful that people had to be turned away.) The models were characters from familiar ad campaigns: the Chicken of the Sea mermaid (not to be confused with glasses-wearing Charlie the Tuna, though that would have been hot), the Morton’s Salt girl, the Jolly Green Giant, caramel-corn-loving Sailor Jack and Mr. Clean (the fantasy man who comes in through your bathroom window when you’re home alone cleaning), among others. Once they’d put on the fund-raiser, saying it was for a billboard, they had publicly committed themselves to the project. And so it was that Van Ausdal called billboard companies and found out how much it would cost to rent one.

It would cost more money than the store made in its first year.

There was even scarier news ahead: The company they opted to go with — Lamar, because it’s family-owned, as opposed to the giant Viacom — requires clients to sign a contract agreeing that if people call and complain about a billboard, the client must pay for its removal and its replacement. That’s $900 tacked onto the cost of a billboard that nobody gets to see.

Liz Olivarez, the Lamar saleswoman who worked with Birdies on finding both the right billboard location and the right artwork to adorn it, did what she could to advise the women before the billboard went up so that they might avoid that costly fate.

“It’s a fine line,” she allows. “Unfortunately, sometimes the public draws that.”

The first design Birdies submitted to Lamar was a simple drawing by Honig. On the left of the 14-foot-by-48-foot billboard would be a woman’s midsection, from right above the navel to just above the knee, rendered in superclean lines. The featured portion of this drawing was, obviously, the area where panties go, because panties are what the store sells.

Further drawing attention to the underwear was the woman’s thumb, right inside the waistband. “Birdies,” the billboard mockup read. “Go downtown.”

I happened to be in the store one day when Olivarez returned with the company’s response.

Nobody, she told Honig and Van Ausdal, had expressed concern about the image.

It was the text. The text that encouraged viewers to support businesses in the steadily reviving downtown area. Apparently, some folks read it as encouragement to cunnilingize like there’s no tomorrow.

When Olivarez brought back the bad news, it was obviously a strong recommendation — given the company’s policies regarding complaints — to consider changing the design. “It wouldn’t have been a big deal to me,” Olivarez later told me when I asked about the possibility that a mini-outcry might have forced Honig and Van Ausdal to pay for ripping down the ad and paying for a less-offensive replacement. “But it would have been really bad for Peregrine and Corrie.”

After a little huffing and puffing, the businesswomen came up with an alternative design, recognizing that the billboard would work better as advertising if it didn’t freak people out.

With black-and-white photography by Naoko Wowsugi and lettering by Davin Watne, the current billboard depicts a woman lying on her stomach, her breasts concealed (aside from a hint of under-boob shadow). That she is seen from the side rather than from the front or the back is additionally tasteful. The only text is the name of the store.

The billboard is pretty. “It’s a formal composition,” Honig says. “Flowers, bees, girls. It could be turn-of-the-century.”

And despite their capitulation to conservative tendencies, that prettiness now constitutes what Honig calls “a very bizarre form of rebellion.”

So many corporations can put up textually inoffensive but visually disastrous images without even feeling the expense. “But we really feel like this beautifies. It can be beautiful,” Honig says.

Other billboards could be, too.

So instead of grumbling about policies that make it hard for small-business owners to take the risk of putting up a truly interesting billboard, I’m going to take advantage of those policies.

Yes indeed, folks. Conservatives don’t own moral indignation. I’m going to start calling in and bitching about every billboard I don’t like, whether it’s sexist or just, you know, ugly.