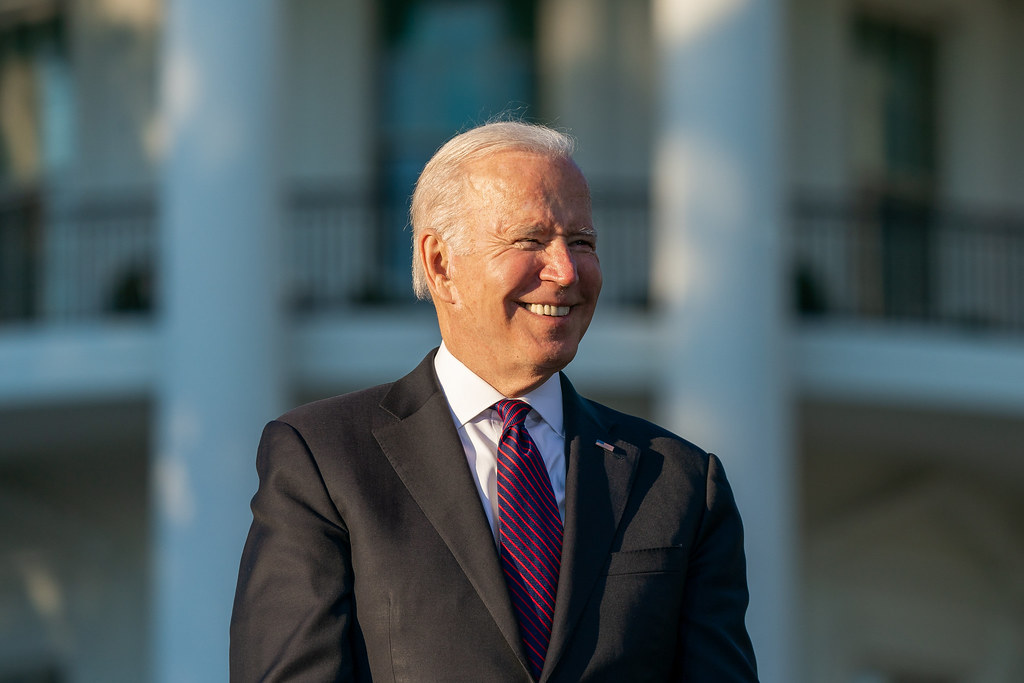 President Joe Biden on Tuesday urged that COVID-19 vaccine doubters stop “peddling lies” on TV and online, as the nation grapples with a rising number of cases due to the highly transmissible omicron variant.

Biden also announced new federal help for testing and treatment in the states, including 500 million at-home rapid test kits that will be distributed for free by the federal government beginning in January.

“Look, the unvaccinated are responsible for their own choices,” the president said in an afternoon address from the White House. “But those choices have been fueled by dangerous misinformation on cable TV and social media.

“You know, these companies and personalities are making money by peddling lies and allowing misinformation that can kill their own customers and their own supporters,” he said. “It’s wrong. It’s immoral. I call on the purveyors of these lies and misinformation to stop it. Stop it now.”

Biden stressed that Americans must get their vaccinations and booster shots as the best protection against contracting COVID-19. “Those who are not vaccinated are causing hospitals to be overrun again,” he said. “Omicron is serious, potentially deadly business for unvaccinated people.”

The new surge is causing many Americans to wonder if they can safely celebrate the holidays with family and friends, he acknowledged. “The answer’s yes, you can, if you and those who celebrate with you are vaccinated, particularly if you’ve gotten your booster shot,” he said.

He said more than 60 million Americans, including 62 percent of eligible seniors, have received boosters — including former President Donald Trump. “Maybe one of the few things he and I agree on,” said Biden.

The new surge “absolutely” will not resemble the initial wave of COVID-19 that hit the U.S. in March 2020, Biden insisted. More than 200 million Americans now are fully vaccinated, and the nation is more prepared, he said.

The White House announced multiple steps that the U.S. will take this winter as omicron emerges as the dominant variant, responsible for more than 73 percent of new COVID-19 cases, according to the Centers for Disease Control and Prevention.

It’s been difficult in many regions to obtain appointments or kits for COVID-19 tests, and administration officials said that Americans soon will be able to order free at-home kits from a website to be set up by the federal government.

The kits, which officials said will be delivered by mail, will be in addition to 50 million test kits already bought by the federal government for free distribution at community health and rural health centers, officials said.

White House press secretary Jen Psaki said details are still being worked out, such as the number of kits each individual can order and whether certain groups will be prioritized.

“Five hundred million tests in January is the largest order we’ve ever made to date, and we’re going to do it as quickly as we can,” she said.

Psaki earlier this year had rejected a suggestion by a reporter that tests be sent to every home free of charge, questioning the cost. At retail, the kits generally cost at least $25 for a pack of two tests and often more.

She said with Tuesday’s move, “We are providing an opportunity, another opportunity or ability for people to…go on a website and request a test if their preference is to get their test to their home. Not everybody will want to do that.”

New federal free testing sites will be set up, the first in hard-hit New York City, in addition to thousands of sites that already are up and running, Psaki said. She said states are coordinating with the federal government as to where new sites should be located.

Biden said he will also direct the secretary of defense to mobilize an additional 1,000 troops such as medical doctors and nurses to work at hospitals through January and February as needed.

To assist hospitals with the expected surge in cases, Biden directed the Federal Emergency Management Agency to mobilize planning teams to work with every state to assess hospital needs and begin expanding bed capacity, “with the federal government paying for all of it,” according to a White House fact sheet. Millions of gowns, gloves, hospital gowns, masks and ventilators are stockpiled, too, Biden said.

FEMA also is ready to send out ambulances and emergency teams to transfer patients from overburdened medical facilities, the administration said. “Just this week, 30 paramedics are heading to New Hampshire, 30 to Vermont, and 20 to Arizona, and 30 ambulances are headed to New York and 8 to Maine,” according to the fact sheet.

On the vaccination front, the White House said that FEMA will establish new pop-up vaccination clinics across the country, including four new mobile units across New Mexico expected to open Thursday. More sites are expected in the coming weeks.

Biden in his remarks sought to calm anxiety provoked by the new round of business, school, college and entertainment closures.

“I know you’re tired…and I know you’re frustrated,” Biden said. “We all want this to be over. But we’re still in it. This is a critical moment. But we also have more tools than we’ve ever had before. We’re ready. We’ll get through this.”