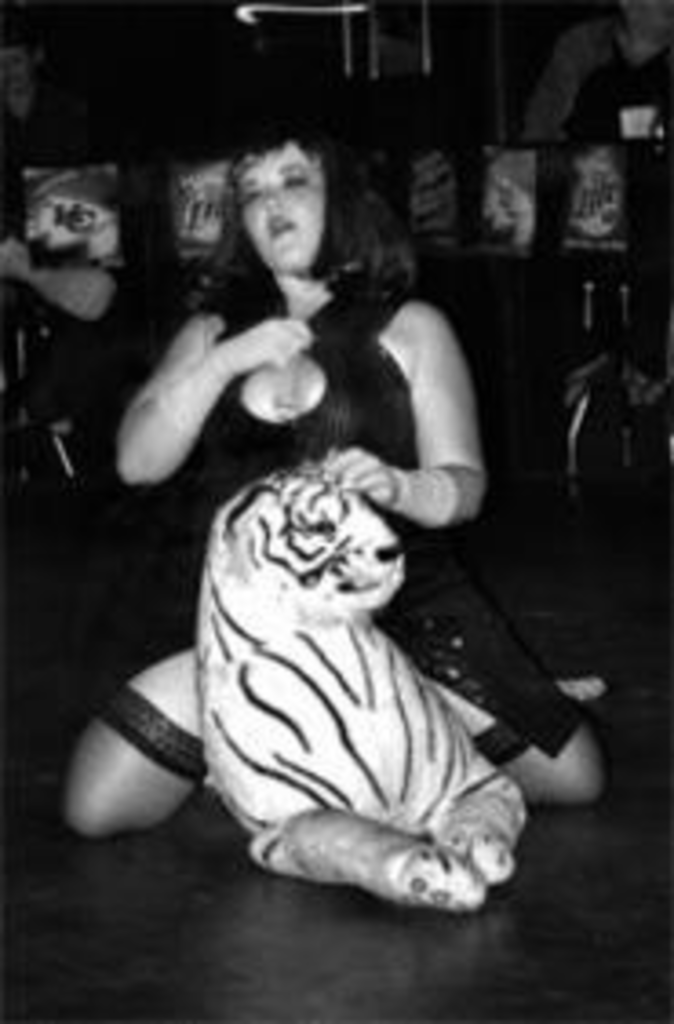 It’s Wednesday night at Tootsie’s, and the disco ball scatters light on the darkened dance floor. Groups of men and groups of women mill about, play pool and engage in typical bar behavior. One drag queen — a tall, rail-thin diva named Paris Sensation — has already changed clothes twice, going from a bandeau top with low-riding, flared pants to a frighteningly short, yellow halter dress, accompanying both outfits with stiletto heels. Her espresso-colored hair curls and falls to the middle of her back, and she flips it around, drinking and chatting with friends. The show hasn’t even started yet.

I’m here to see my friend Rita, aka Temper Tantrum of the Burly Q Girly Crew, perform in her newest capacity: as a female drag queen. We’ve spent the evening making necessary preparations — picking up an extra wig at the Arizona Trading Company; swinging by another friend’s house to grab a stuffed tiger; purchasing some Mike and Ikes, which will be tossed at the audience as though they’re pills. (Rita was hoping for Red Hots, but Walgreens was out of those.)

The show begins, as always, with a short skit by the drag king and host known as Buttweiser. In his blond mullet wig and flavor-saver mustache, he comes out lip synching to Def Leppard’s “Rock of Ages” — you know, still rollin’, a rock ‘n’ rollin’. And then Buttweiser transforms into the host, introducing Paris Sensation in her low-hanging, pink-G-string revealing, faux-fur-lined denim skirt. Next there’s Shane Lee, the drag king cowboy in Levi’s and a feathered cowboy hat. The short-haired, sunglasses-wearing Justin He takes a turn, with a macho swagger and a convincing crotch-grab-and-adjust maneuver. And Twat La Rouge blows everyone away with her larger-than-life act, transforming into a giant, Muppet-headed woman with matted long hair, light-up fake boobs and shapely fishnet-covered legs sticking out beneath a huge, padded ass. Her dancing is larger than life, too — she rips off several layers of different outfits, each time revealing one skimpier and sexier, and does some “lap dances” that are mostly jumping up and down with legs landing on either side of a patron’s lap. Twat La Rouge’s skits always inspire customers to line up with dollar bills. I mean, they line up to the door. Apparently people really do want something to grab onto. Apparently, they want a lot to grab onto.

So far, the drag queens and drag kings have all been in keeping with common understanding of what it means to be in drag: The women onstage are men, and the men onstage are women.

But when Rita makes her appearance as Temper Tantrum, she is performing not as a man but as twice the woman — an über-woman, more woman than most real women have any desire to be. Her act fits in. In fact, it may fit in better here than at the Burly Q Girly Crew shows that have become a local entertainment staple.

Some of the performers in those burlesque shows have been girls-on-the-scene who might have been performing, but not necessarily as anything other than their already-cute selves. Whereas they wear stage makeup intended to make them look good, Rita puts on eye shadow in too-bright colors — it would be unacceptable even as a level of terror alert — and she applies it in a circle that extended up to her eyebrows and down almost to her cheeks.

“It was total drag-queen makeup,” she says now. So, at Tootsie’s, like all the other drag queens, Rita puts on a costume of iconic womanliness, and she takes the act as far over the top as she possibly can, all for the sake of hilarity.

At one time, proving that she might have been kinda round but was still totally sexy was an important part of the act. But now, more self-assured, she says she’s bored with that. What’s not boring is being outrageous in a place where people are game for outrageousness.

“When I started doing burlesque, I would tell people it was because I couldn’t be a drag queen,” she explains. She knew about “The World-Famous Bob” — a female female impersonator living in New York City and rocking the burlesque world there — but she didn’t think she could do what Bob did. “I was like, ‘She’s 6 feet tall, and has really distinctive features. I’m 5 feet 2. I’m not tall enough to be a drag queen.'”

But there was another concern for Rita. She assumed that she couldn’t be a drag queen because she didn’t know how other drag queens would feel about it. “I feel like drag queens get to decide if I get to be a drag queen or not,” she says. That’s why she didn’t even think about trying it until she was out one night at Tootsie’s with Twat La Rouge, who invited her to perform on a Wednesday night. Having been extended a formal invitation, she jumped at the chance to prove her worth.

To distinguish this new act from burlesque, she has set up two rules for herself. She made up the first rule after unintentionally breaking house rules by showing a little too much real boob in her first week as a drag queen, earning a gentle but firm reprimand. She decided it was better not to show boob anyway. The other queens can’t — plus, it draws straight men out of the woodwork, and she doesn’t want their attention. Her other rule is that she will not show her real hair. She will have to find good wigs, just like all the other ladies in the house. Real, luscious hair and real tits constitute unfair advantages. Everything else is up for grabs. Sometimes literally.

Her first appearance of the night is set to a song she has used for burlesque skits. It’s called “Teach Me Tiger,” and it involves the exaggeratedly sultry lip-synching of ridiculous lyrics — Teach me, tiger, how to love you, ow, ow, ow, ow, ow. She struts around in a tight, black, sequined dress worn backward so that the deep V-back and high slit became features in the front of her outfit, revealing cleavage and lots o’ thigh. Rubbing her nose affectionately against a big stuffed tiger and awkwardly straddling the lifeless toy, she is a caricature of a woman caught in an overly coy attempt at propositioning someone.

Her boobs try to sneak out of the dress, but she manages to scoot ’em in. And then she’s ready to transform into a 1950s grandma-housewife in a frumpy wig and housedress for her second appearance. This time, her song is about a guy who takes it to heart when hippies call him square, then gets into drugs instead of heeding motherly pleas not to listen to the fringe of society. He dies. It is a tragic performance executed with full-on ridiculousness by Temper Tantrum’s stereotypical teetotaling Midwestern housewife character, who so desperately warned that boy to behave. And now look.

Rita is still in drag-queen training. Under the watchful eye of the truly incredible Twat, she’s learning about false lashes and proper ways of putting on a wig.

She may have a lot to learn, but I am happy for my friend the female drag queen. She has finally found where she belongs.