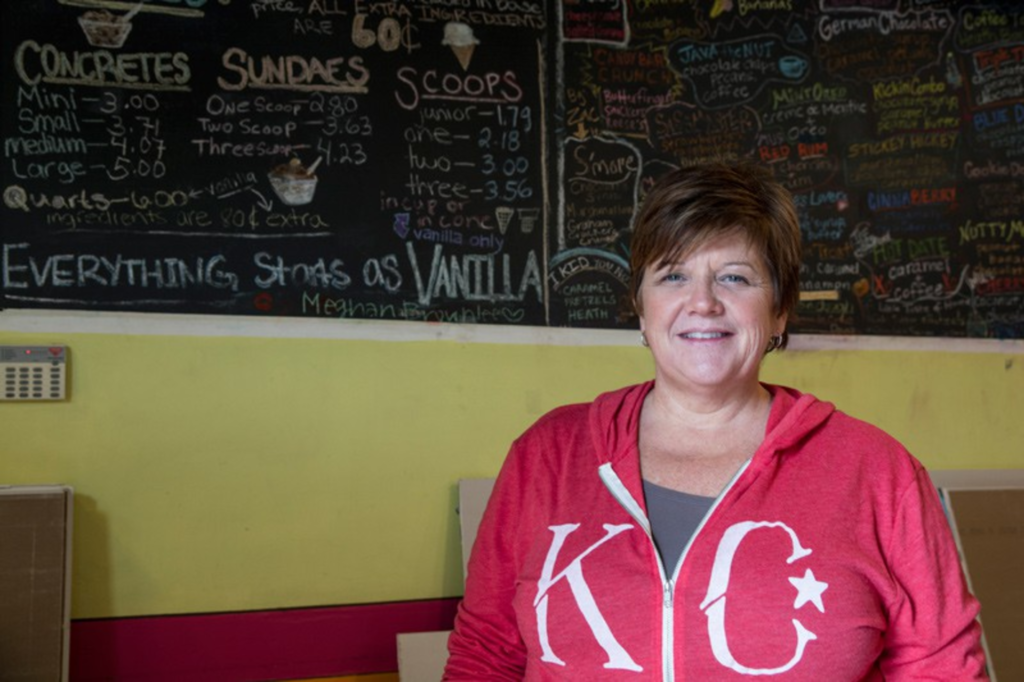 What I do: I help teenagers discover the working world with their first jobs, while scooping out and serving delicious frozen custard. Foo’s is an extension of my teaching. So really, I teach, all the time.

What’s your addiction? I’ve been baking a lot lately.

What’s your game? Baseball, and not just this year. I like dominoes, too.

What’s your drink? It depends on so many factors! A great glass of red, a hoppy beer, a glass of bubbly, a vodka-soda or a ginger ale.

What’s on your KC postcard? One snapshot of every neighborhood in town, from north to south and from east to west.

Finish this sentence: “Kansas City got it right when …” It opened the KC BizCare office downtown. It is so much easier to complete the mandatory paperwork than it used to be!

“Kansas City screwed up when …” The school district went to hell. It’s essential to have strong schools for so many reasons.

“In five years, I’ll be …” Thinking about who’s going to take over Foo’s for me … ehhh, former employees?

“I’ve been known to binge-watch …” Comedians in Cars Getting Coffee.

“I can’t stop listening to …” The Mavericks.

The best advice I ever got: “Roll with the punches.” — L.W. Bremser

Worst advice: “Sure, you’ll look great with a perm.” — Unknown

My sidekick: I’m a solo gal, really. But my best gal-pal sidekick, Leigh.

My brush with fame: I translated some stuff for Merchant Ivory when they were here filming Mr. & Mrs. Bridge. I was hanging out while they were filming in a home on State Line, when Paul Newman came into the room (I was the only one in the room), and he asked if he looked OK. Ah, yeah, Paul, you look mighty fine.

My 140-character soapbox: I’m excited for my hometown. The next generation is doing a fine job all over the city: the arts, the beer scene, the restaurants. Good things are happening, and it is important to keep it local when you can.

What was the last thing you had to apologize for? Being late. I’m working on it, I swear.

My recent triumph: Renovating my 26-year-old Foo’s. It was quite a job!