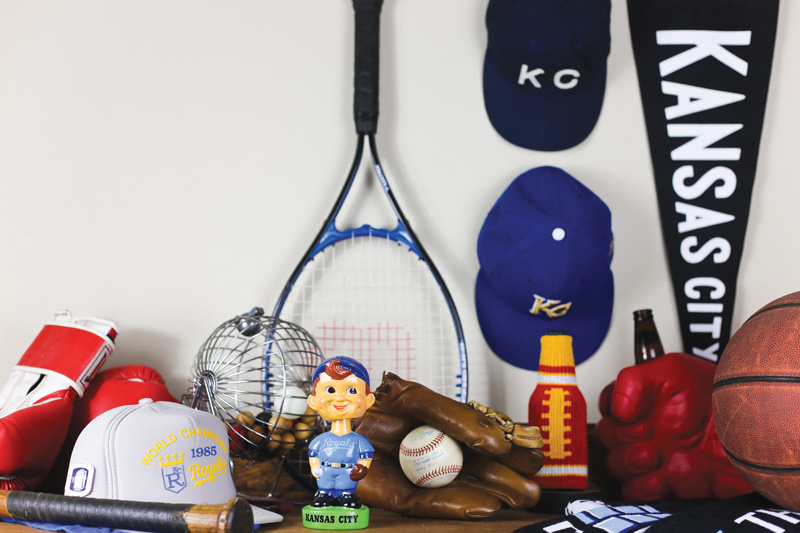 Cornerback Marcus Peters intercepted a pass on the first play of his NFL career. This piece of trivia augured an unusual ability to put his gloves on passes that opposing quarterbacks intended for others. In his first 19 regular-season games, Peters collected 12 interceptions. (He also intercepted a pass in the Chiefs’ win in the playoffs over the Houston Texans.) To get a sense of how bonkers this is, consider that the future Hall of Famer Charles Woodson did not intercept his 12th pass until his fifth year in the league. Peters is an emotional player — he gets flagged for penalties and gives up some big plays, suggesting porous concentration. But it’s thrilling for the Chiefs to have a defensive player with such unique skills.

Forward Dom Dwyer is a dangerous striker who has reached double digits in goals for each of his three seasons in Kansas City. The Englishman’s ability to find the back of the net makes him a target for clubs that play in fancier leagues. This summer, Sporting KC coach Peter Vermes turned down a team in Greece willing to pay a $3 million transfer offer; a few weeks later, Dwyer was linked to a club that plays in the the second-highest tier of English soccer. In the end, the rocket launcher stayed put. One day after he scored in a home match against Houston, Dwye’s wife, FC Kansas City striker Sydney Leroux, gave birth to their first child, a son, whom they named Cassius.

Steven St. John, the 810 WHB morning host, loves the hometown teams. He tells sweet and funny stories about his experiences attending Chiefs and Royals games as a kid. Now a husband and a father, he has an endearing, Clark Griswold–like enthusiasm for the local pro teams as well as for the Missouri Tigers. “That loss sucked as much as a loss could suck,” he lamented after Mizzou’s football team lost to Georgia in September. Optimistic that better days were ahead, St. John then tried to entice his producer to accompany him to a future game in Columbia. He lowered his voice to a papa-bear’s hush: “I’ve got a ticket to the game against Kentucky with Jake Pounders’ name on it,” he said, identifying producer Jake Gutierrez by his alias. At that moment, it was easy to be jealous of Gutierrez for having such a big-hearted friend.

The Chiefs Win a Playoff Game

The 1993 Kansas City Chiefs advanced to the AFC Championship game (losing to Buffalo). The next 21 seasons would end in either the Chiefs making a quick exit in the playoffs or missing them entirely. The 2015 Chiefs seemed unlikely to reverse the trend, winning only one of the season’s first six games. Then, fortune turned, and the team won its remaining 11 games and qualified for the playoffs. The Chiefs faced the Houston Texans in the wild-card round. Led by the defense (Houston managed only 226 yards of offense) and special teams (Knile Davis scored a touchdown on the opening kickoff), the Chiefs soundly beat the Texans, 30–0. The following week, the Chiefs lost in New England. But at least the string of eight playoff defeats had ended, and fans no longer have to conjure Marcus Allen or Joe Montana to recall the last Chiefs team worth a damn in the postseason.

As the Royals marched to their title, writers at Uproxx posted a video of a Ford commercial that Bret Saberhagen made after being named the most valuable player of the 1985 World Series. It was the mid-1980s, so of course Saberhagen showed his appreciation for Ford trucks by rapping and performing a dance, the Saberhagen shuffle. Writers at The Tonight Show With Jimmy Fallon took notice of the clip and decided to resurrect rapping Saberhagen. After showing the vintage commercial to the audience, Fallon was joined onstage by “Bret Saberhagen,” portrayed, skinny mustache and all, by A.D. Miles, the show’s head writer. The Tonight Show team came up with new rhymes for fake Sabes, which Miles delivered in Saberhagen’s adorably dopey manner as members of the Roots, Fallon’s house band, howled. The character returned to rap and shuffle for Eric Hosmer and Salvador Pérez, who appeared on the Tonight Show with the World Series trophy.

Jack Sock, who graduated from Blue Valley North High School before becoming a professional tennis player, left Rio de Janeiro with two Olympic medals. First, he and Steve Johnson won the bronze in men’s doubles. Two days later, he and Bethanie Mattek-Sands defeated fellow Americans Venus Williams and Rajeev Ram in the gold-medal match in mixed doubles. Upon his return to Kansas City, a triumphant Sock threw out the first pitch at Kauffman Stadium and led the “I believe that we will win” chant at a Sporting Kansas City game. Then it was off to New York for the U.S. Open, where Sock, who put a greater emphasis on singles play this year, was the last American standing when he lost in the fourth round.

Best Place to Finally Get Into Yoga

After moving to a new studio near the UMKC campus, Nella Yoga has become the center of a friendly yoga-based community. Founded by Shanell Petersen, who came to Kansas City from the U.S. Virgin Islands, the intimate studio offers classes that serve up a relaxing yet challenging mixture of vinyasa and ashtanga, as well as “piyo,” a mixture of pilates and yoga. A mother to twin girls, Petersen quit her corporate job after giving birth to focus on doing something that, she says, “mattered to the community.” She is a calming presence, smiling constantly as she leads her classes through their flow, occasionally pausing to offer gentle individual instruction and adjustments. The studio is a totally unintimidating (and amazingly affordable) beacon for beginners.It also offers a variety of activities such as meditation instruction, cooking classes, wine tastings, sugar-free challenges, and outdoor yoga in the warmer months. Nella Yoga is a great place to get in shape, physically and spiritually.

Best Place to Sweat Your Cares Away

After opening its first area studio near the Plaza last summer, Des Moines-based Power Life Yoga installed itself in Corinth Square earlier this year, giving even more people the opportunity to turn off their brains and sweat for an hour a day. Power Life definitely attracts extroverts — the kind of people who smile and chat about gratitude after their workout, their cheeks red and their faces dripping with sweat. After a few classes, you’ll start to see where they’re coming from. The perpetually positive instructors select upbeat tunes to complement their classes, which are held in heated rooms and range from beginner-friendly vinyasa to the ass-kicking “power sculpt,” a mixture of weights, cardio and yoga that remains challenging no matter how many times you do it. Then there’s cardio barre, which combines traditional moves like rows and biceps curls with yoga and high-intensity exercises designed to keep the heart rate up. For new students, the first week of classes is free — but odds are you’ll want to keep coming back for more, especially as the weather turns cold.

The name suggests that the Royals hired Bilbo Baggins’ distant cousins from the Shire, but Whit Merrifield has a decidedly un-hobbit-y look: athletic, of course, with an easy smile. After joining the team when numerous injuries decimated the roster in the spring, he proved himself worthy of a starting spot. Rex Hudler sounded impressed, and at least one couple named their son after the 27-year-old rookie. Along with Brett Eibner and Cheslor Cuthbert, Merrifield upped the Royals’ rookie babe quotient, and held a batting average around .300 all season while demonstrating an uncanny ability to play any position on the field. Fingers crossed that Merrifield is somewhere in the lineup next spring. 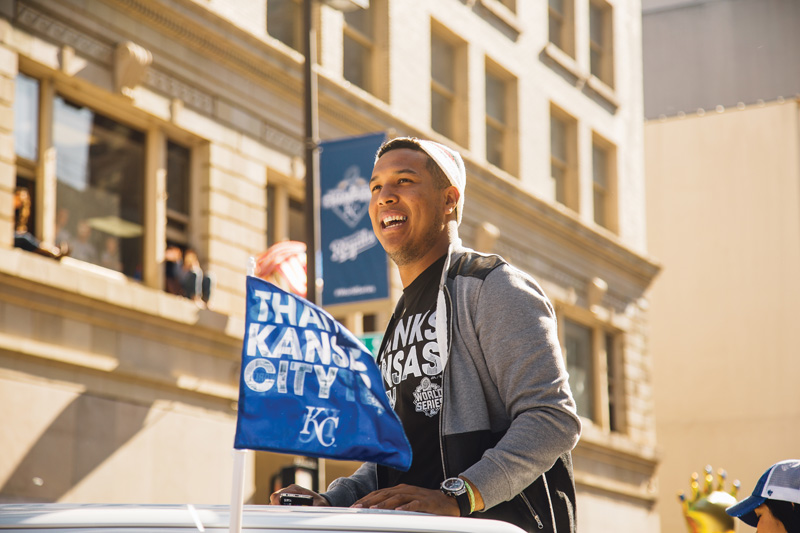 Has anyone ever said a bad thing about Salvador Pérez? The Royals’ jovial catcher and 2015 World Series MVP is such a popular guy that he was the leading vote-getter for the All-Star Game, and T-shirts touting “Salvy for Pérez-ident” have popped up at multiple boutiques around town. There’s good reason for this, of course — Pérez’s amusing Instagram videos with teammate Lorenzo Cain have become legendary, as has his ability to throw out anyone ballsy enough to attempt to steal second while he’s behind the plate. He is likely the best defensive catcher in the American League. His offense is just as valuable, with Pérez hitting the most home runs of his career this season. Earlier this year, the Gold Glove catcher signed a contract that will keep him in town through at least 2021 — good for the Royals, and for the city as a whole.

Danny Duffy was pitching in relief when the Royals began their defense of last season’s World Series title. He stepped into the starting rotation in May and by August was being talked about as a contender for a Cy Young, the award for the best pitcher in each league. Wielding a new breaking pitch and working with simplified delivery, the left-hander stabilized the rotation, allowing three earned runs or less in all but two of the starts he made in June, July and August. He pitched one of the most brilliant games in team history on August 1, striking out 16 batters and allowing only one hit to Tampa Bay. He wobbled down the stretch, and the Cy Young talk faded. But the Royals would not have stayed in contention as long as they did in 2016 without Duffy’s midsummer excellence.

This past winter, the Buffalo Bills hired Kathryn Smith as a special-teams quality-control coach, making her the first full-time woman coach in the NFL. Predictably, certain men pouted about this, with ball-scratching caveman Kevin Kiley — a sports broadcaster then working in Cleveland — grunting loudest. “She couldn’t possibly be qualified to the same level that a man could be qualified,” he farted on the air, having called Smith’s hiring “absurd.” Less predictably, Chiefs wide receiver Chris Conley was among the many who objected to Kiley’s idiocy, and he nailed it on Twitter: “Sexist comments about a female coach disgust me. Some men (boys) are mad she knows and can coach football better than them. #GrowUp.” Kiley and his radio station parted company not long after that. Meanwhile, Conley is, for other reasons as well, follow-worthy. 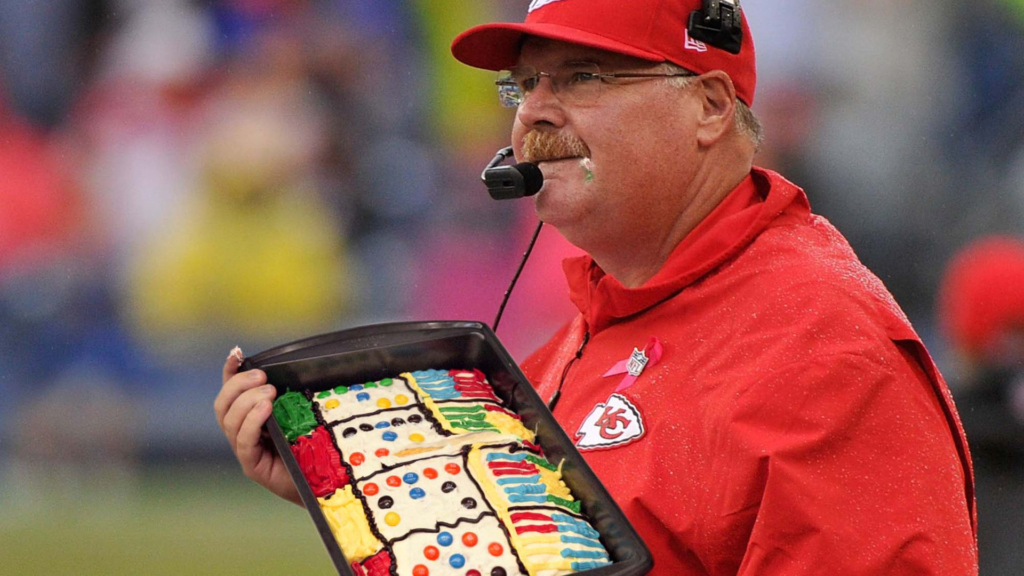 Hungry Andy Reid in The Onion

The satirical news publication The Onion has been having fun with Chiefs coach Andy Reid since his days in Philadelphia. “Andy Reid Grumbles Something About Rebuilding Mode As Sandwich Falls Apart in Hands” was the headline to a story during his last year with the Eagles. He continues to appear in Onion stories, and they just keep getting better. Since coming to KC, The Onion reports, Reid has been furious with himself for not properly managing the clock at the end of a 72-ounce-steak challenge. He has hazed rookies by making them tote his snack bags to and from practice. And in Week 3 this season, we saw “Andy Reid Carefully Consulting Chiefs Playcall Sheet Cake,” featuring an image of Big Red holding a colorful slab of cake on the sideline, his cheek smeared with frosting. Look, fat shaming is wrong. But if there is a scenario where it’s maybe, sorta OK, an acceptable target might look like a highly compensated fella who works in an industry that has historically downplayed risks to worker safety while asking for taxpayers to subsidize the construction of its facilities. Pass the inspirational burrito. 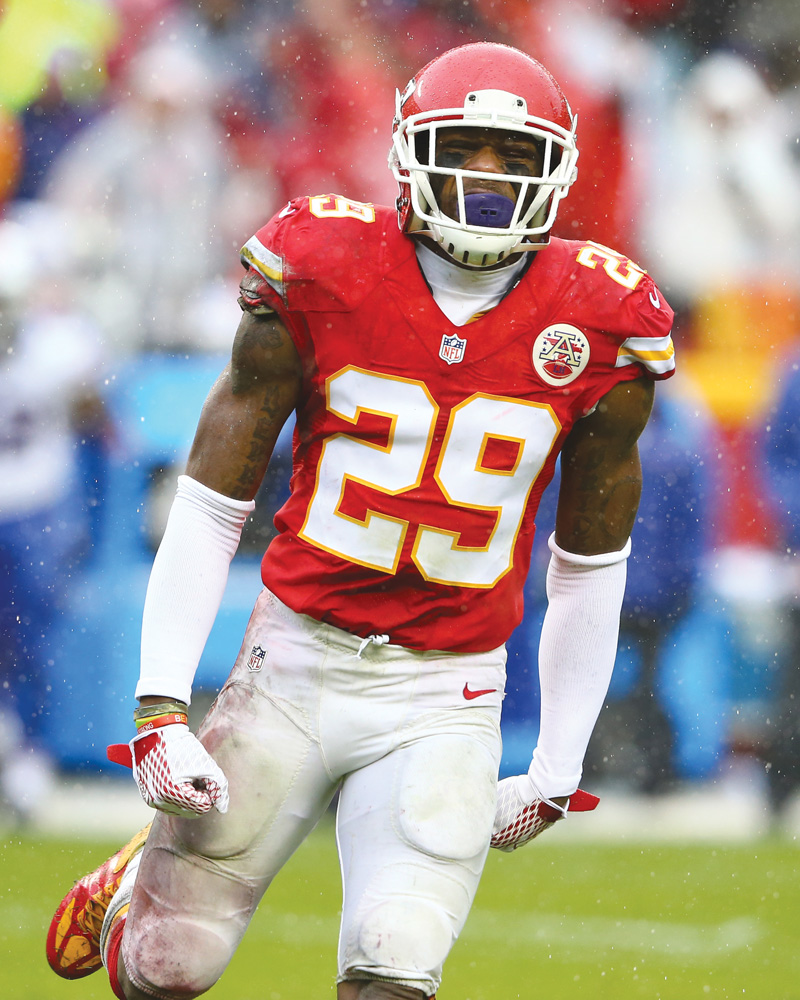 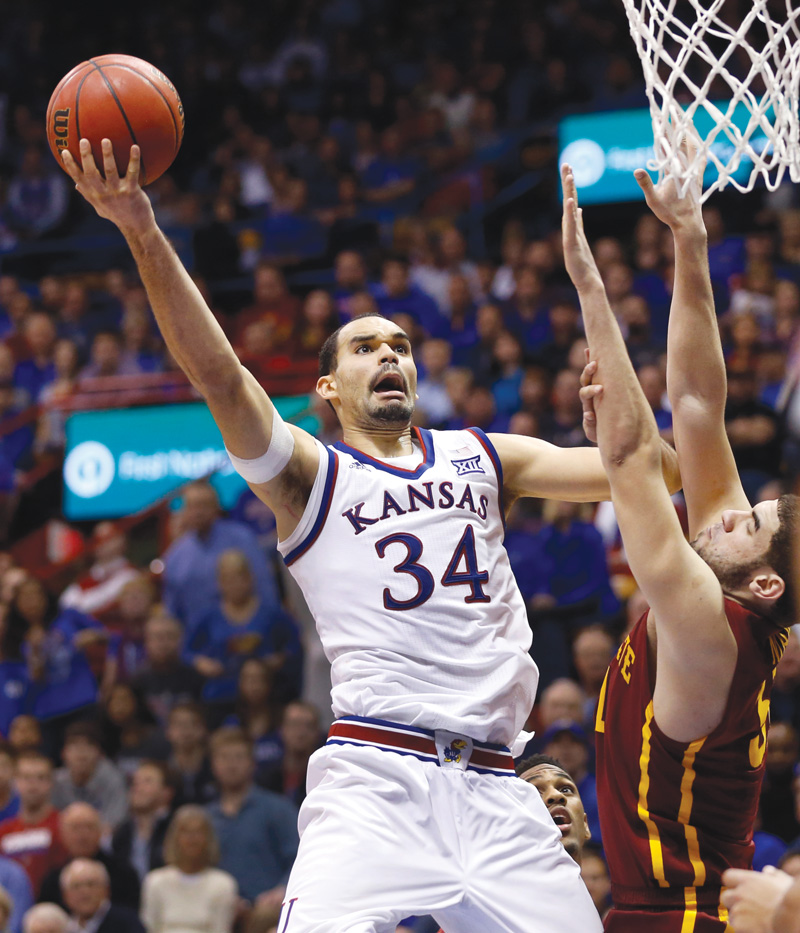 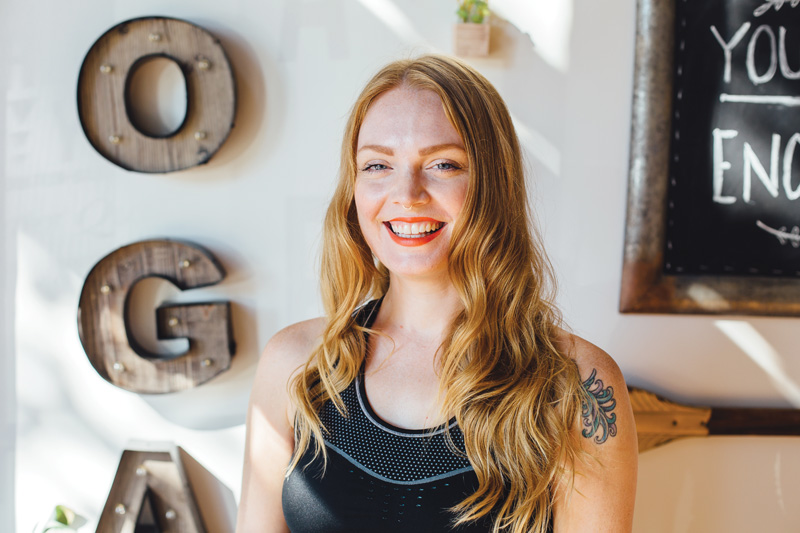 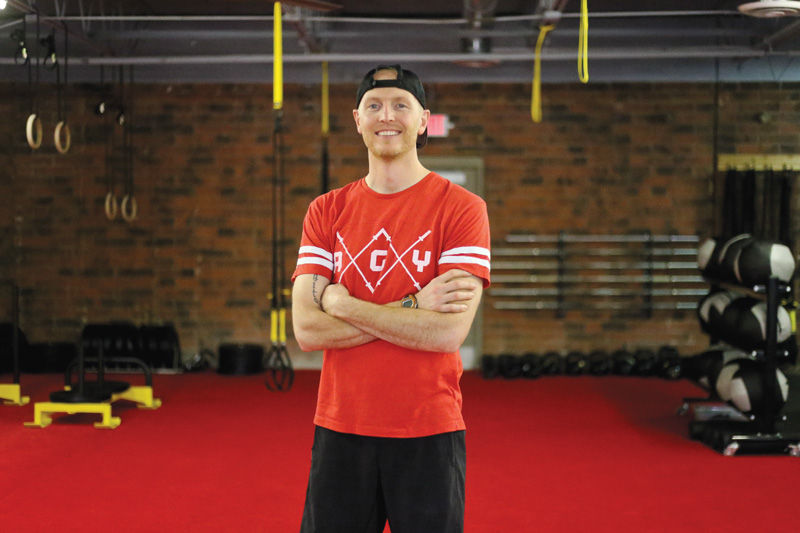 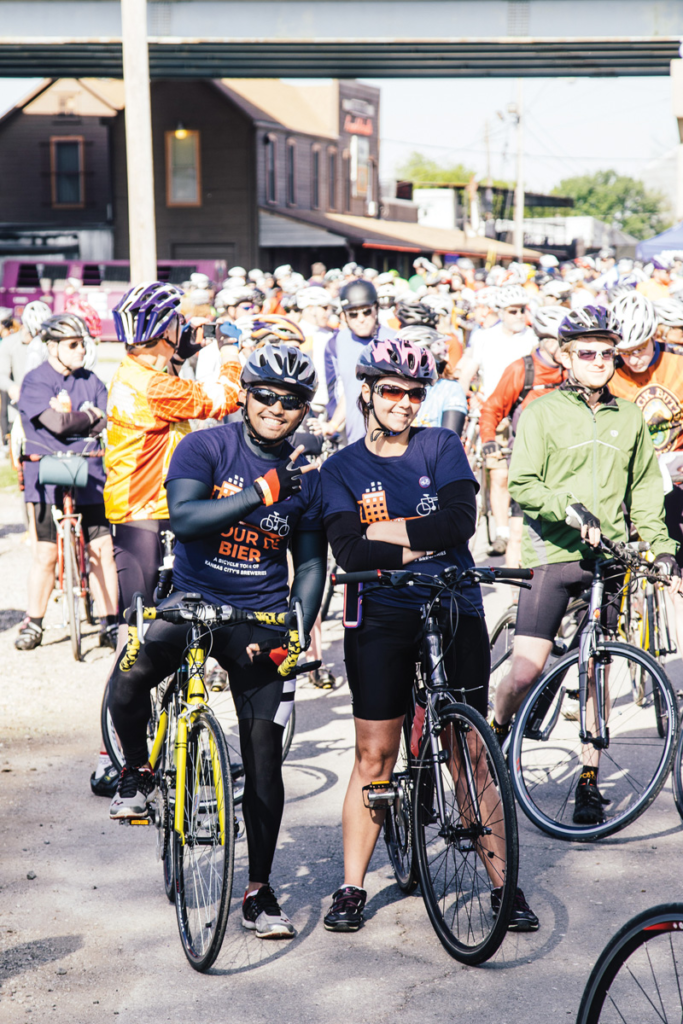 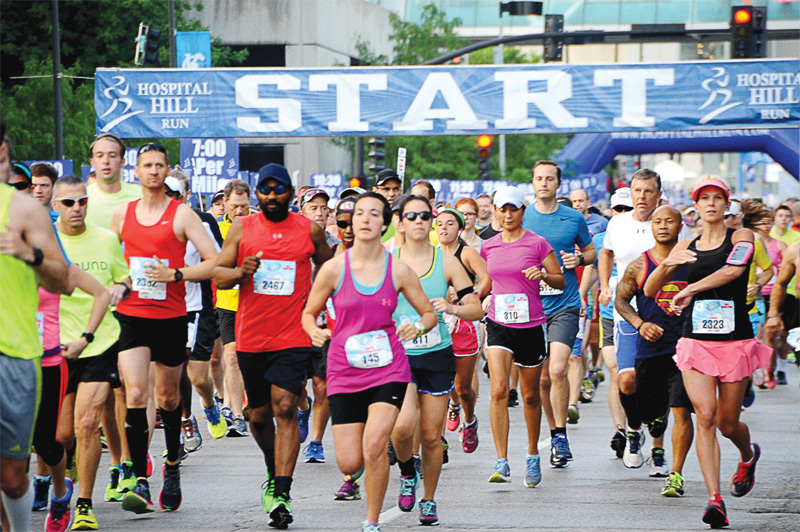