For movie characters having a very hard time, 2017 was a very good year 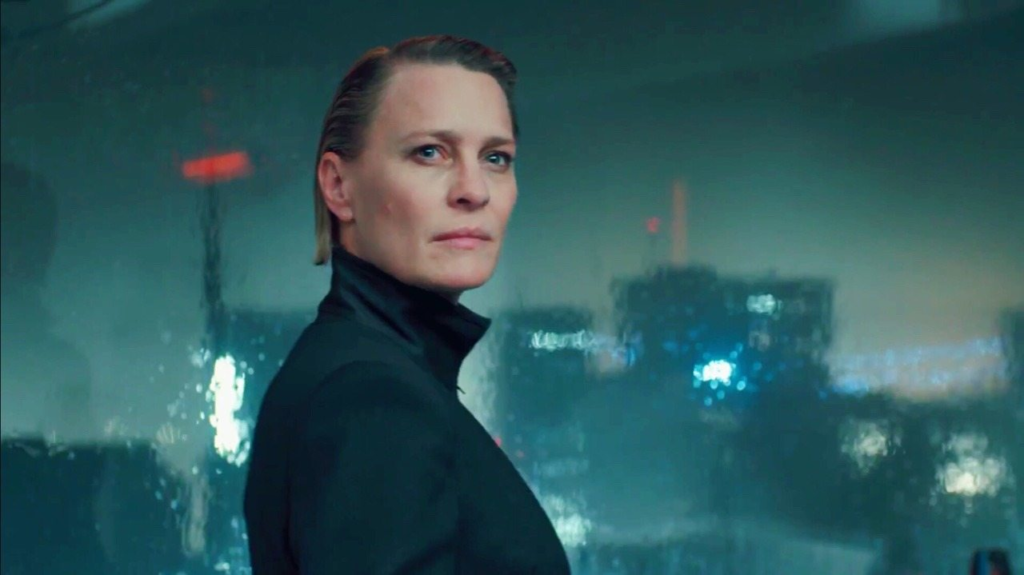 “The world is built on a wall. It separates kind. Tell either side there’s no wall, you bought a war.” — Lt. Joshi (Robin Wright, above), Blade Runner 2049

The best movies of 2017 were those that in some way acknowledged the societal walls that either materialized or became more fortified after President Donald Trump was elected. We’ve lived with walls a long time, of course, but one of the elements that makes the medium of film so special is its uncanny ability to put an audience in the shoes of a person on the other side of a given barrier. That insight has rarely felt more crucial than it does right now.

We’ve just lived through a year of monumental disillusionment. From Charlottesville to Las Vegas, we’ve felt fear, anger, bafflement. We’ve questioned our collective perception of reality, seemingly no longer able to agree how to define truth. It would be easy to look to Steven Spielberg’s The Post — a movie rushed into production only months ago, riding timely political themes (a president bent on limiting freedom of the press, powerful men bullying a woman) — for reassurance. Too easy, it turns out. With its self-congratulatory tone, The Post comes across as a relic, a prestige package produced by Hollywood liberals and designed to safely reaffirm what half its audience already believes, while condescending to the half it’s trying to persuade. Watching it gave me no relief from this year’s exhausting cacophony.

Not that succor is the point of moviegoing. But when our realest shared experience becomes one of alienation, the dearth of purely escapist picturemaking feels lazy, if not grotesque. My 12 favorite movies of the year were bold, even extreme in their storytelling. They were stories about people who don’t fit in but are searching for meaning anywhere they might find it. For characters having a very hard time, 2017 was actually a very good year.

Guillermo del Toro’s lush, 1960s-set romantic fantasy cleverly turns inside out the notions of what Americans of the era considered “normal.” Yes, there’s a married dad with an off-the-shelf nuclear family, but he’s also a sinister government agent (Michael Shannon) with some unchecked kinks. Meanwhile, our protagonists are marginalized and living on the fringe of society but remain capable of joy. The Shape of Water uses an easy-to-mock premise — a mute woman falling in love with a mysterious fish-man creature — in witty, unexpected ways, and it doesn’t condescend to any of its figures. Gorgeous production design and lived-in performances from Sally Hawkins and Richard Jenkins elevate this adult fairy tale, which swells with empathy and passion.

What seems to be plucky tenacity reveals itself to be seething, blind rage from Frances McDormand’s grieving mother of a murdered teenager, in this tragicomic rural morality play. Writer-director Martin McDonagh crosses the line of acceptable behavior more than once, taking McDormand’s antihero into some truly dark places and risking the audience’s patience. Likewise, Sam Rockwell’s simple-minded cop with a hair-trigger temper walks his own tightrope of believability. Yet Three Billboards finds unexpected shades to go with its broad strokes, becoming an incisive exploration of guilt and grief, and building to one of the most dramatically satisfying endings of the year.

Grief also hovers throughout David Lowery’s fourth film as writer and director, as the ghost of a dead man (Casey Affleck) haunts the house he lived in with his wife (Rooney Mara). Less a genre film than a remarkable piece of high-concept experiential cinema, A Ghost Story creates and sustains a mood of mystery and stillness that encourages reflection. (It shares this in common with 2017’s best film.) That’s saying a lot, considering that the main visual image of the movie is an inherently silly one — an enormous white sheet draped over a person. Lowery gives it gravity, and the conceit itself becomes everything, taking us on a journey that reminds us what a small part we play in the grand design of the world.

These two beautifully wrought movies may seem light years away from the big themes examined so far on this list, but when the vagaries of the human heart are detailed with such precision, there’s plenty of anger and pain involved. Luca Guadagnino’s coming-of-age gay drama, Call Me By Your Name, is set in the Italian countryside of the 1980s and features no small amount of relatable detail for anyone who can recall the pangs of first love. Paul Thomas Anderson’s lovely Phantom Thread is a muted romance for control freaks, filled with quiet desperation and 1950s couture. It’s no surprise that Thread’s Daniel Day-Lewis turns in a towering performance (reportedly his last), but the real discoveries here are Vicky Krieps, who plays Day-Lewis’ not-so-fragile muse, and Call Me By Your Name’s Timothee Chalamet, whose character’s aggressive behavior is a cover for his inexperience.

6. The Killing of a Sacred Deer

With the deeply disturbing follow-up to 2016’s most audacious film, The Lobster, writer-director Yorgos Lanthimos has firmly established himself as the leading voice in absurdist nightmare scenarios. In The Killing of a Sacred Deer, a fatherless boy (Barry Keoghan) insinuates himself into the life of a cardiovascular surgeon (Colin Farrell) and threatens to upend his family’s future. Like Three Billboards, there is a demand for justice. Taking its inspiration from numerous Greek tragedies and playing out its central dilemma in the most pragmatic fashion, Deer is a chilling indictment of modern life. Darren Aronofsky’s Mother! is a similarly cold-hearted slice of metaphorical terror, starring Jennifer Lawrence, but the execution is decidedly more frenzied. Both films offer biblical allegories designed to assault and challenge, but Lanthimos is more focused than Aronofsky, who favors the kitchen-sink approach.

Without spoiling the hilarious, brutal twist lurking at the end of Jordan Peele’s audacious directorial debut, it’s worth noting that it’s just the final surprise in a film full of them. Loaded with uncomfortable truths about race in America, Get Out is also wildly entertaining. Peele begins by exposing the “noble white people” premise of Guess Who’s Coming to Dinner? for the horrific situation it is by simply telling the story from the black man’s point of view. Daniel Kaluuya puts on a brave face as his new girlfriend’s parents pat themselves on the back for being so progressive, but the interloper begins to believe there’s something more sinister at play at the white family’s estate. The brilliance of Get Out is partly due to Peele’s unrelenting commitment to showing us the emotional truth of a lifetime of discrimination, but he also turns the familiar conventions of modern horror films against his audience, illuminating a final observation that rings so true, it’s hard to even call the movie a satire.

The street smarts displayed by small-time Queens criminal Connie Nikas (a never-better Robert Pattinson) in this gripping, stressful cinematic experience are formidable. And his seat-of-his-pants choices also say a lot about the shitty stereotypes that persist in today’s “woke” culture. The New York–based indie filmmaking team the Safdie brothers follow Connie’s desperate flailing with a kinetic energy that rarely lets up. Although Good Time works 100 percent as a genre film, Pattinson’s misplaced sense of righteousness and the film’s refusal to back down from ugliness make the whole bigger than the sum of its expertly staged parts.

With the #MeToo movement exposing decades of sexual assault and discrimination against women by powerful men, there’s no better time to revisit the most misunderstood and mismarketed movie of 2017. Colossal is ostensibly a Being John Malkovich–like take on kaiju monster movies — except that it’s not. It’s really about an alcoholic party girl (Anne Hathaway) who finds herself under the thumb of yet another abusive creep. Jason Sudeikis embodies the kind of entitled white-male resentment that’s boiled so prominently to the surface since Trump’s candidacy stoked its long-simmering fires. The fact that many who saw the film never saw his bullying tendencies coming show just how big a blind spot we have for this kind of behavior. Spanish writer-director Nacho Vigalondo has created a genre mash-up like no other, but there’s a lot more on Colossal’s mind than giant monsters destroying South Korea. Like many of 2017’s best, though, it’s a tough go for literalists. Getting hung up on the mechanics of how the monster-mirror works is a mistake, and would mean denying yourself one of the most insightful character studies of the year.

A visceral World War II epic, Christopher Nolan’s 65mm, IMAX-projected Dunkirk utilized the large-scale format of a movie screen as no other film this year managed. Sure, there were explosions, but they weren’t there just because big-budget filmmaking these days seems to require explosions in order to get people off the couch and into a theater. Every bullet and shell instead served an expertly calibrated piece of subjective filmmaking that emphasized personal experience over cookie-cutter “inspiration.” In telling the story of the evacuation of trapped Allied troops from a beach in France, Nolan jettisoned the typical histrionics that mark most Hollywood war movies. No, it’s not easy to get a solid grasp on all the 20-some characters trapped in this pressure cooker. Yes, some of the dialogue is tough to understand. I’ll bet it was during those six days, too. Nolan’s unique, three-part narrative structure gives the story deeper dramatic irony, while ace cinematographer Hoyte van Hoytema conjures a bevy of poetic images to represent so many of the terrified shared experiences — cowardly, tragic, heroic — during this defining moment in history.

The most monumental cinematic achievement of 2017 was one nobody seemed to have asked for: Denis Villeneuve’s stunning, and stunningly relevant, sequel to 35-year-old sci-fi-noir classic Blade Runner. The movies, and the real world, had spent more than a generation growing beyond the self-contained “future” of Ridley Scott’s original — a drama first and an action movie a distant second — in which artificially intelligent replicants are virtually indistinguishable from humans. Yet Villeneuve’s follow-up bravely resuscitates the methodical, art-house pacing of the first film and asks the audience to consider tough questions about the nature of humanity, the delusions of desire and what constitutes a soul. Ryan Gosling’s replicant, K, is programmed to hunt other replicants and to obey his commander (Wright), but he wants to be special, just as any human does. He is constantly reminded, however, that he’s not even human. He lives in isolation, save for a hologram girlfriend (Ana de Armas) who exhibits humanlike traits herself. A revelation causes the invisible wall that separates human from replicant to come tumbling down — and comes with a mystery about K’s own existence. Harrison Ford’s supporting turn is among his strongest performances, and no expense was spared for the striking production design work that undergirds every detail in cinematographer Roger Deakins’ breathtaking compositions. If you look only at the box office numbers, this huge gamble — a $180 million sequel to a bygone theatrical failure — was a major loss. Yet every frame of this gorgeous epic justifies the endeavor and argues for its inclusion in cinema’s top rank. If our longing for meaning goes hand in hand with our fear that the truth is worse than we know, Blade Runner 2049 is a movie not just for this fragmented moment but for all time.