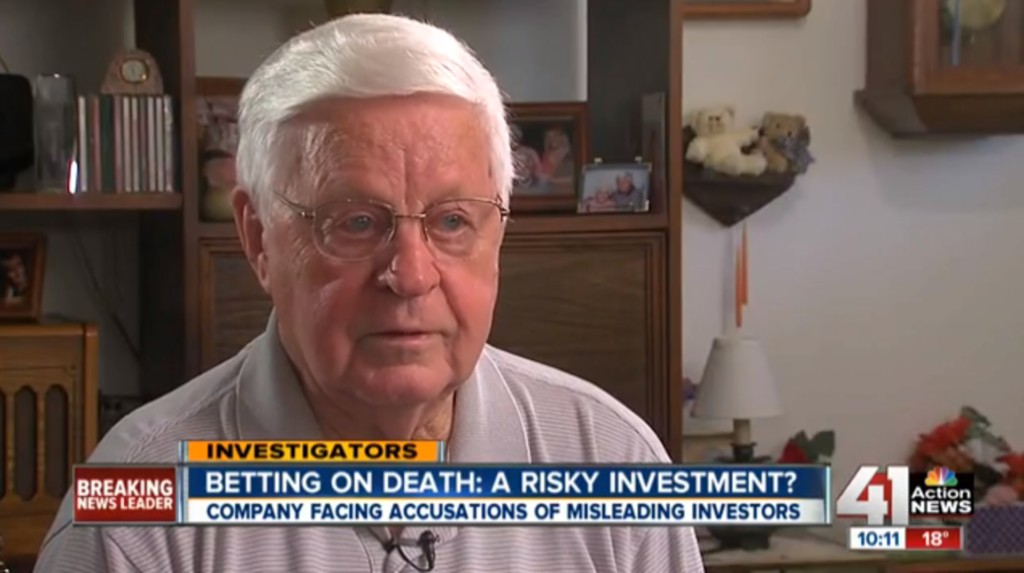 We’re big fans of KSHB Channel 41 ace reporter Ryan Kath, whose investigative wits sometimes bring us tales of the grim side of local humanity. One of our favorites was exposing Michael Brooks, the Kansas City councilman who sent lewd photos of himself to a woman who wasn’t the married pastor’s wife.

Kath brought us another gem yesterday  last February that we checked out yesterday: The story of a Belton retiree who is nervous that his nest egg is getting ready to crack under a shaky investment scheme.

According to Kath’s story, Roy Johnson swallowed some bad advice when he was told he should plunk down six figures on anonymous life-insurance policies. His investment meant the insured could stop paying premiums, and then Johnson would collect the face value of the policy once the person died.

The life settlement racket has been going on for some time, but KSHB’s story was the first we knew of a local person who took the bait.

“I didn’t think I was taking any risk,” Johnson told Kath.

The first sign of an unsophisticated investor is the belief that there are risk-free investments.

Johnson was apparently taken in by reports of the people whose life insurance policies he was backing with his investment. They listed last names, ages, some medical background and life expectancies. The reason they call it life expectancies and not life guarantees is that no one really knows when someone else is going to die. In many cases, the life expectancy of the insureds was two to four years.

“Life expectancy is a window of time,” Johnson chortled the report. “Two to four years, that’s a window. Something is supposed to happen in that window. But nothing has happened.”

The morbid irony of an investment that requires someone else’s death to gain a payoff wasn’t lost on Kath.

“This almost sets you up to be disappointed if someone outlives expectations,” Kath said to Johnson, who reluctantly agreed.

So Johnson called the TV station, suspecting that he had been duped. Kath follows the long trail of crumbs left by the company that offers these investments, called Life Partners. Unsurprisingly, the company has been tagged by federal and state regulators for its sketchy business operation.

A little nosing around on our own paints a portrait of a company under siege and probably not worthy of Johnson’s (or anyone else’s) $200,000 investment.

On Monday, Life Partners’ top executives went on trial in Texas, where the Securities and Exchange Commission has charged them with defrauding investors.

A quick look at the company’s last quarterly report with the SEC shows that Life Partners’ viability hinges on the outcome of the trial.

“The SEC enforcement proceeding has profoundly affected our operations, which we believe will not recover until and unless the proceeding is favorably resolved in a timely manner,” the company says in its quarterly report.

The company’s own report goes on to say they think they have enough money to keep running through fiscal year 2015, but the future’s uncertain beyond that. Life Partners’ press releases are mostly commentary about the various lawsuits against the company.

All of which is to say that betting on life settlements is a bad idea from a financial perspective, to say nothing of the karmic implications. If the goal is a safe investment, go for triple-A-rated municipal bonds. It’s not sexy stuff, but it’s better than sitting around waiting on people to die.