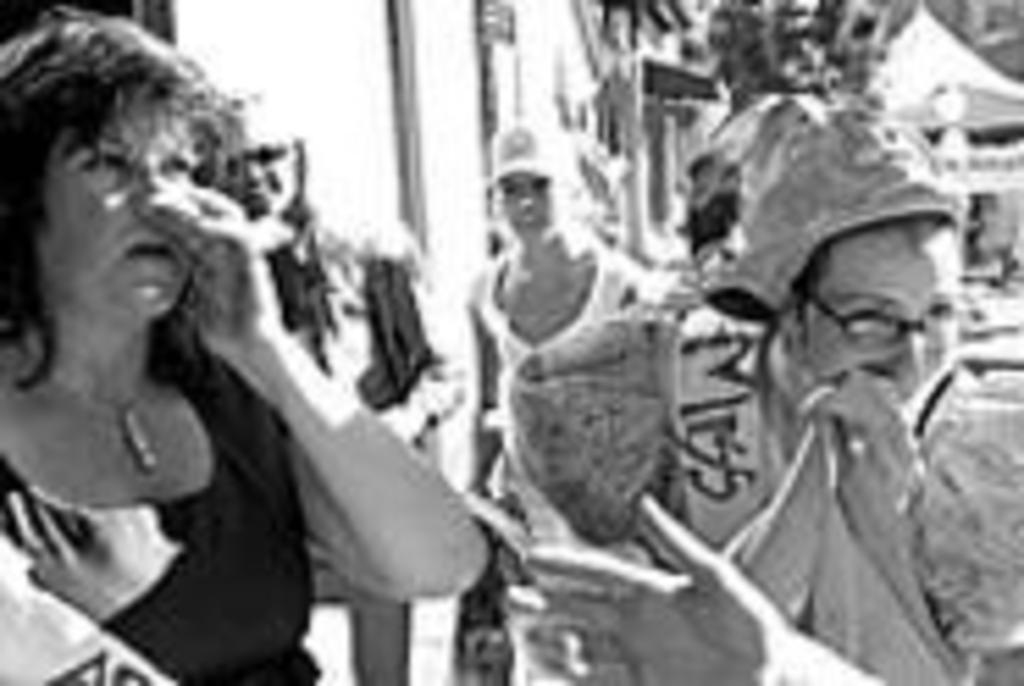 “I really hope and pray that every one of you die a slow and painful death from the next terrorist attack,” George Bush says, addressing a jeering, hissing gathering of greasy garage-rock fans. “Fuck you and go to hell.”

The president and vice president are wearing dresses. Their faces are rubbery, their eyes vacant, their hair plastic. Their lacerating lines come from bogus e-mail addresses such as urmorons@aol.com and youstupidbitch@yahoo.com.

But the strong feelings that inspired people to send these messages to the women behind the masks are real.

Susan Estes (Bush) and Sarah Beasley (Cheney) milked their hate mail for laughs as part of a skit at Davey’s Uptown on October 2.

In the past eight months, the organization known as Beauty Slays the Beast has raised more than $7,000 for left-leaning nonprofit organizations and has registered scores of voters while goosing local activism to new levels of creativity.

Beauty Slays the Beast originated in February when Beasley, a 34-year-old marketing executive, and Abigail Henderson, a 27-year-old musician, were sipping whiskey one night. They imagined a one-day festival that would celebrate the work of Kansas City’s female musicians, artists and filmmakers while rallying the talent and the audience against the Bush administration. Their plans took shape as friends joined the brainstorming sessions.

“Sarah and I would have long conversations about enhancing our drinking-and-gabbing time,” says Skye Howard, a 31-year-old social worker. “Hanging out in bars starts to get pretty pointless.”

The group started as Bush Against Bush, but when some members complained that a racy name might sabotage their cause, the group adopted the more ambiguous phrase (KC Strip, May 13). No one had any experience in large-scale event production, and most members had never been particularly active activists. But the group didn’t lack enthusiasm or ambition, and eventually a variety show was set for June at Davey’s Uptown.

During the planning sessions, Henderson sometimes was loud and confrontational as she steered conversation to feminist topics. Beasley was the diplomat, reframing other members’ harsh outbursts. (About a third of her sentences during the meetings started with “I think what she means is … “) And Christy Hoffman, a 40-year-old publishing-house employee, part-time teacher and outreach chair for the local John Kerry campaign, emerged as a dominant force, handling the group’s public relations.

With strong personalities involved, there were plenty of clashes over details. Composing a mission statement took the better part of a three-hour meeting before spilling into a week’s worth of revisions by e-mail. Members, says the mission statement, consider themselves “true patriots” who fight “apathy, hesitancy and silence” while using artistic endeavors to “educate, entertain, infiltrate and inspire our community to bring about social change.”

Early on, though, Beauty Slays the Beast chose some curiously traditional fund-raisers. Bake sales were understandable; MoveOn.org made more than $750,000 from cookie-cutter events nationwide in April alone. But the group’s burlesque car wash at El Torreon in May caused dissent. A few members declined to participate.

“I like the idea of an organization of women using our intellect, not our sex appeal, to further the cause,” says Renee Boman, one of the group’s organizers. “There is a place for burlesque, but I don’t feel like that place is washing some asshole’s car to raise money for what is, to me, a feminist cause. Feminism is a large part of my motivation for joining BSTB and a major reason why I’m against Bush and his administration.”

“That’s part of what women do, bake cookies and dress sexy,” Hoffman counters. “We do it because we want to. I think the word feminist is outdated. Feminism, whatever. I’m a person like everyone else.”

The car wash raised $600. A few weeks later, the group held another one. Despite the racy, Hoffman-penned press release (“The foxy ladies from BSTB will don platforms and glitter and scrub your ride”), this one was supposed to be sexless. Members took fashion tips from the androgynous glam rockers of the ’70s, with unfortunate results.

“Glam rock doesn’t translate well for women,” Estes explains. “Most of the glam rockers were men that were gender-bending, wearing lots of makeup and sometimes overly feminine clothes. No amount of costuming could make us look like men in drag. By the end of the day, we’re sweaty, gross-feeling, and we look like prostitutes. Well, how much money did we make?”

Six hundred dollars. The money went toward putting on the June 27 variety show. That night, a brief storm cleared in time for the outdoor entertainment. Actors convincingly depicted Ann Coulter, Mary Cheney and Ronald Reagan during mostly improvised skits. In the dunk tank, BSTB members wearing the omnipresent Bush and Cheney masks shouted incendiary anti-gay remarks to bait homosexual hurlers and taunted women with variations on “You throw like a girl.” The event grossed more than $6,000 for MoveOn.org.

Most of the Beauty Slays the Beast members wanted to keep the organization alive after its namesake production ended. Henderson left to pursue recording opportunities, and Hoffman shifted her focus to activities more directly related to the election.

Now the group’s undisputed leader, Beasley unveiled her street-team concept at the group’s Reel Democracy Film Festival at the Screenland Theatre on August 22. The strategy: Outlandishly dressed women would storm into nightclubs outside the midtown comfort zone, perform short skits and toss fliers to the wind as they zoomed to the next destination.

“We’re nonpartisan,” Beasley assured questioners at the film festival. It was an odd statement from someone standing in front of a “Bush is a punk-ass chump” bumper sticker. “We are against the current administration and the policies and decisions they’ve made,” she went on. “We know there are a lot of Republicans who are against this administration, too.”

On September 17, when the group arrived at the Brooksider, the street-team blueprint changed.

“We were so nervous about approaching people,” Howard says. “We went to Charlie Hooper’s first, and right away, a waitress there wanted to register. At the Brooksider, drunk people would ask, ‘What are you doing?'” So much for being provocative.

“At first it sounded rebellious,” Estes says. “But when we got there, we couldn’t pull it off. It felt fake, pushy and strange, and we wouldn’t like it if they did it to us.”

The street team has improved the group’s ability to think on its feet, as evidenced by how it salvaged the afternoon of September 25, which started at the Red Bridge strip mall. A sympathetic salon owner had offered the group some sidewalk space, and the members showed up in garish, glitzy thrift-store prom dresses and subversive sashes. Howard’s read “Miss Information.” Estes, in the Bush mask, was “Miss Leader.” Boman was “Miss Pronunciation,” and Beasley was “Miss Appropriation of Funds.” But there weren’t many shoppers to see the spectacle.

“There are tons of people outside [for the Plaza Art Fair], and we’re getting five people every hour,” Howard said. “I’m fine with aborting this.”

The group caravaned to the Kemper Museum of Contemporary Art. Nearby, artists were offering their alternatives to the Plaza Fair’s wares. As the masked Beasley approached an intersection, a shirtless, ponytailed man in a Volkswagen convertible with a Kerry-Edwards sticker shouted, “You’re beautiful, Dick Cheney!”

“It’s hard work being president,” Estes said, nailing Bush’s future catchphrase weeks before the debate that spawned it. Her voice sounded thin and hollow through the mask. When she removed it, her sweat-matted hair stuck to her face in squiggly patterns, and her glasses were fogged.

The group headed toward the Plaza, marching past the usual Mill Creek Park protesters, a few of whom peppered Donald Rumsfeld (Estes’ boyfriend, Michael Crosby) with questions. “We want answers, not coverups,” one demanded with inappropriate vigor. Rumsfeld shrugged and kept moving.

As they strolled through the Plaza Art Fair, Bush’s shadow cabinet encountered blank expressions. People looked past the president’s parade as if it were invisible. There was about a five-second hand-to-trash turnaround time on most of the fliers the group distributed.

As Beauty Slays the Beast members weaved through the dense crowd, tribal rhythms boomed from a nearby stage. Bush and Cheney started to dance. “We’ve really got carnival now!” declared a drummer onstage.

With the October 6 deadline for voters to register in Missouri in the rearview mirror, Beauty Slays the Beast has entered the next stage of its campaign: urging people to the polls.

“Some people say, ‘Now that you’ve gotten people’s attention, you should be a pro-Democrat organization,” Beasley says. “But we’re not about backing candidates.”

On Friday, October 22, its street team will make its first appearance at African-American establishments such as the Epicurean and Pete’s Place. On Sunday, October 24, it will hold a “Go, Chiefs! Go vote!” rally in tailgate territory at Arrowhead Stadium. The same day, there will be an encore presentation of the Reel Democracy film festival at the Screenland.

After the election, Beasley says, they’ll change their approach. “We’ll focus on local politics and issues, like the City Council and the school board, and help out local not-for-profit organizations.”

To get the area’s apathetic masses interested in those unsexy issues, though, Beauty Slays the Beast will need more than masks.