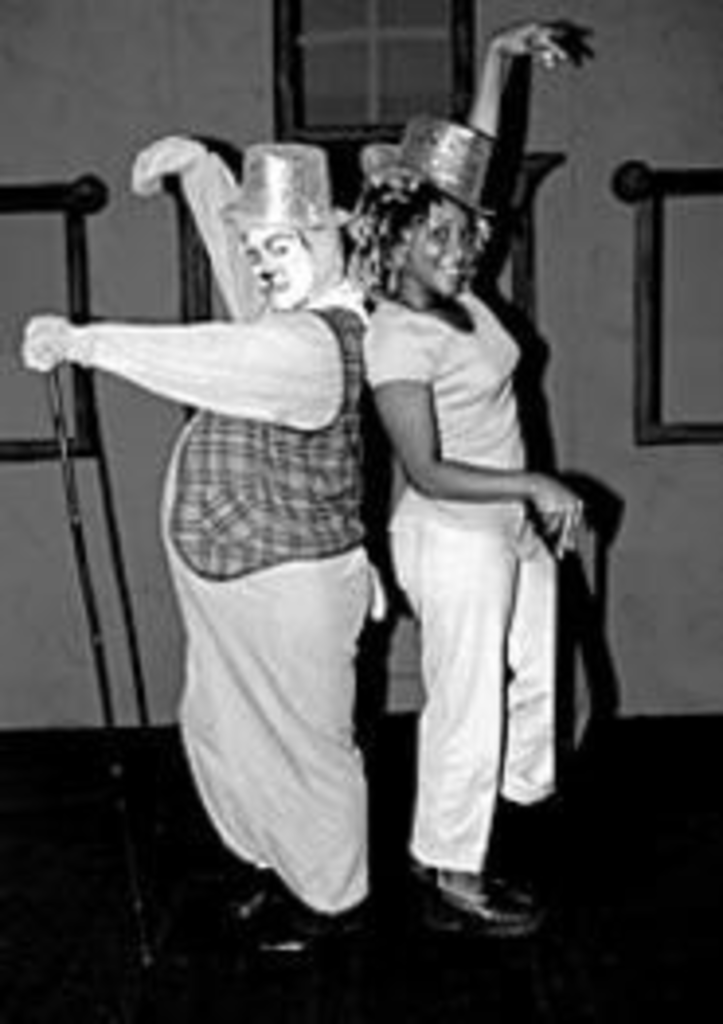 OK, so I didn’t expect Goldilocks and the Three Bears to be all that provocative. I figured that Theatre for Young America might, at best, enable this childless adult to retrace the story’s arc and purpose in the fairy tale canon. Frankly, I couldn’t even remember whether the story involved building houses of straw, donning grandmotherly drag or jumping over a moon.

But with the opening scene of this terrific, spirited show, it wasn’t just the memory of porridge that knocked me out of my seat. If youth theater isn’t normally the place you’d find a musical tackling volatile issues such as race relations and the seductive power of capitalism, no one seems to have told Theatre for Young America. By casting black and white actors in interesting ways, for example, the troupe manages to put on a show that’s not only better than what you’d expect from good children’s theater but also surprisingly intelligent.

Papa (Justin Shaw), Mama (Victoria Barbee) and Baby Bear (Cinnamon Schultz) rise from either a good night’s sleep or months of hibernation with a hearty appetite. As the porridge (its package featuring a bear-eared takeoff of the Gerber baby) is coming off the stove, Baby has a conniption fit about her mother’s predictable cuisine. Baby is cuckoo for something called Choc-o-Pops; she’s fallen under its spell thanks to its ubiquitous commercials and addictive jingle.

The woods that morning also are inhabited by the family known as the Humans: Mr. (Damron Russell Armstrong), Mrs. (Teri Adams) and their precocious daughter, Goldilocks, played in a dazzling performance by Angela ‘Wildflower’ Polk. Their expedition becomes a camping trip from hell when Mr. throws out his back, Mrs. forgets most of the food and the tent poles, and Goldilocks experiences an episode of unbridled wanderlust.

When Baby Bear and Goldilocks both escape their parents’ watch, a chase ensues that wouldn’t be out of place in a Keystone Kops movie. It’s clear that director Valerie Mackey’s appreciation of silent films runs deep; in a later duet between the little ones, Baby impersonates Charlie Chaplin. If the songs weren’t so good and the dialogue so snappy, the show might have played just as well without any sound at all.

Eventually, the Bears and the Humans realize they have to share the same planet. Handshakes and bear hugs abound, and one gets the sense that Baby and Goldilocks will be lifelong friends. But the sight of these different species resolving to put their differences behind them and be good neighbors has a profound resonance that may fly over young heads.

What lifts the production above your average children’s theater is its casting of black and white actors in unpredictable ways. Mama Bear, Mr. Human and Goldilocks are black; Mrs. Human and Papa and Baby Bear are white. Casting the Humans or the Bears as all black or white would have given its dynamics a rather creepy or pedantic aura; this way, the show is charmed.

Polk has never been this well-utilized. She’s generously spotlighted to employ her expansive voice in two back-to-back solo numbers, composed by Gene Mackey and Cheryl Benge. The first is a familiar aria for musical heroines that poses the timeless question about finding one’s heart; the second is a wholly comic number in which she discovers the Bears’ humble home and uneaten porridge. In a curly black wig with amber tips, she’s like a Broadway-bound Tina Turner, a whirlwind of energy and charisma. (She’s so good that one hopes to see her next in a fairy-tale musical like Once Upon a Mattress, where she’d get a six-pack of numbers.)

Schultz’s Baby is also nicely played, with a streak of sass and independence a mile wide. (When she realizes that Goldilocks is the Choc-o-Pops spokesperson, she becomes a starstruck fan.) The actors playing the adult bears and people all have winning moments, especially Adams, whose Mrs. makes sure the audience knows that camping in the woods is not her forte. Armstrong’s tendency to mug isn’t as irksome here as usual. When he’s communicating a dad’s desperate hunt for his daughter, playing to the back row is not without cause.

Postscript: Although audiences enthusiastically embraced the Heart of America Shakespeare Festival’s return to its original one-show-all summer format with Hamlet earlier this year, artistic director Sidonie Garrett says the festival will revisit a revolving pair of shows next summer: the comic Much Ado About Nothing, which she will direct, and the history King Henry IV, Part 1, to be directed by Mark Robbins.

Garrett says Hamlet‘s numbers were great, but she’s chosen two shows in part so that the year of Shakespeare-themed performing events going on in the coming months — shared with the Kansas City Symphony and the Coterie, among others — would go out with a double bang.

“There’s been talk of even more Shakespeare events going on past our next season,” Garrett says. “It’s a sign that there will be more for all of us to cross-promote. We’re excited to present [again] a rotating repertory format.”

Part of the symphony’s contribution to the Year of the Bard, called Supremely Shakespeare, is Dmitri Shostakovich’s Hamlet Suite, written for the 1964 Russian film version. The mix will incorporate textual Hamlet excerpts, featuring the festival’s own great Dane, actor Jason Chanos, reprising bits and pieces of his rambunctious performance. The Lyric is the site of the performance October 24 and 25; the show moves to the Carlsen Center at Johnson County Community College in Overland Park on October 26.