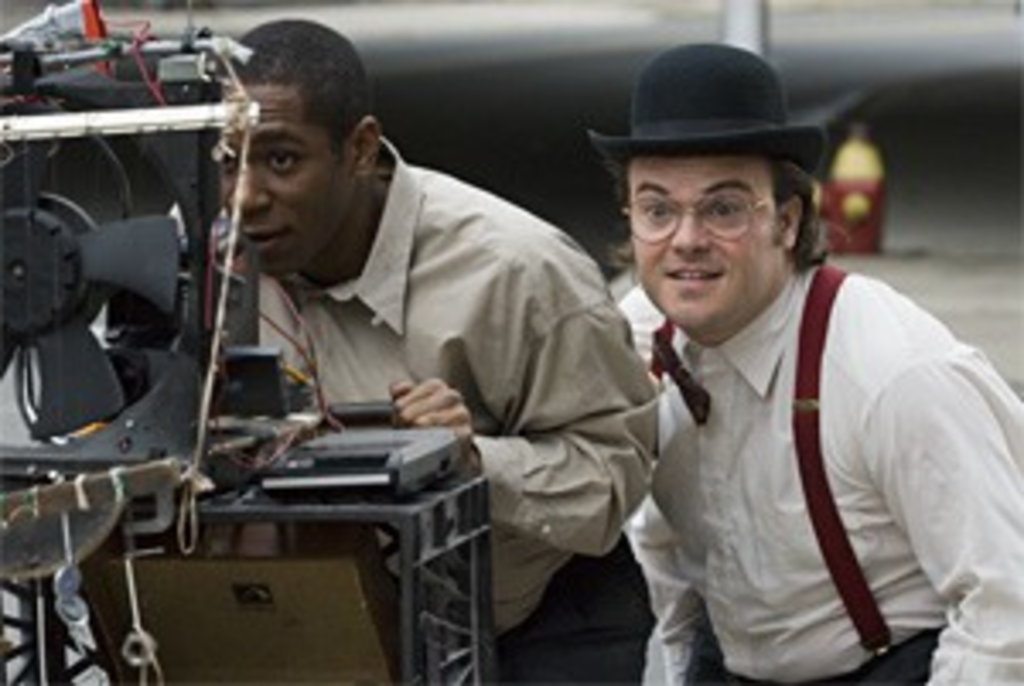 The pleasures of Be Kind Rewind do not extend far beyond the promise of its premise: Jack Black, magnetized and manic (yawn), erases every single videotape in the rental store where he hangs out and has to reshoot the movies with pal Mos Def. Theirs becomes a ramshackle filmography of redos made for pennies on the multimillions: Ghostbusters, 2001: A Space Odyssey, Rush Hour 2, The Lion King, Robocop and, most amusingly, the Ali-Foreman doc When We Were Kings. Too bad the makeovers occupy only a few minutes of screen time. The film, written and directed by Michel Gondry, doesn’t seem terribly interested in its own conceit. Instead, it dawdles around the margins and then lurches toward the let’s-put-on-a-show climax around which the film appears — rather shakily — to have been built.

Be Kind Rewind is a muddle — not amiably ambling or affably shaggy but a mess that gets messier. The whole thing looks improvised by amateurs more concerned with being clever than conveying affection. For the first time in the former music-video director’s scattershot career, which includes a heartbreaking, mind-bending masterpiece (Eternal Sunshine of the Spotless Mind, which he didn’t write) bookended by dazzling disappointments (Human Nature and The Science of Sleep), Gondry seems completely lost, unsure whether his heroes are accidental visionaries wasting their talents or charming idiots who can focus a camera. The greatest mystery, though, is how something peddling the bliss of moviemaking is absent any hint of joy.

It takes forever to get going. Mike (Mos Def) works in a ramshackle Passaic, New Jersey, movie-rental store owned by Mr. Fletcher (Danny Glover). The boss, for whatever reason, has refused to shift his catalog to DVD or even acknowledge that VHS is so 1998. Not surprisingly, the store is in fiscal and physical ruin and about to be torn down — assuming, of course, it doesn’t merely fall down — and Mr. Fletcher feigns an out-of-town trip to scope out shinier video stores short on product and long on business. In his absence, Mike is left to run the store. That’s when the stock is ruined by the nincompoop Jerry (Black), whose attempts to sabotage the nearby power plant have left him a walking magnet to whom no one would be attracted.

After far too much moseying toward something like a plot, Mike and Jerry find themselves having to reshoot — or, “swede,” the meaning of which is never explained — Ghostbusters for a customer (Mia Farrow) who’s also Mr. Fletcher’s eyes and ears in his absence. Turns out, she can’t tell the real thing from the sweded copy. Others in the neighborhood can, however, and soon the duo’s ass-covering scheme becomes a full-service operation. The guys begin taking requests from cinephiles and schmucks alike who believe their haphazard makeovers are the works of inadvertent auteurs.

On this point alone, Gondry is so late to the party, he’ll have to sweep up. Be Kind Rewind debuted at the Sundance Film Festival last month, no doubt hoping for the warm embrace of film fetishists who would take seriously its sweet silliness. But only last year, Son of Rambow bowed in Park City, Utah, and it’s a far superior film about the very same thing: hoping to capture a bit of a movie’s escapist magic by remaking it in your own image. And in 2003, three men debuted in Austin, Texas, their years-in-the-making, shot-by-shot redo of Raiders of the Lost Ark, a feat so remarkable that producer Scott Rudin snatched up their life story for a movie about the remaking of a movie — mighty, mighty meta.

So Gondry’s film already has the stench of been-there-done-that, and it simply doesn’t go far enough — which is to say, funny enough — to overcome it. Somewhere around the middle of the movie, it turns into an anti-piracy message, courtesy of Sigourney Weaver as a Motion Picture Association of America exec who comes to Passaic to shut down the remake operation (yeah, Sigourney Weaver, star of Ghostbusters, har-dee-har). That plot point also quickly disappears, and Mike and Jerry set out to save the store by making their own movie about a jazz legend Mr. Fletcher claims once lived above the video store. So for its third act, Be Kind Rewind becomes an Andy Hardy hootenanny, with the whole neighborhood putting on a show and Mos Def banging on a piano as Fats Waller.

There’s no disputing Be Kind Rewind‘s attempt at sweetness — the movie is as sentimental as a tear-stained get-well card. But it’s too flat to work up any feelings. Gondry, left to his own thin devices, is a master of the intellectual side of filmmaking but has no idea how to wring emotion from his subject matter. Worse, Be Kind Rewind is also a drab, flat-looking film, like something actually made by men for whom a camera is less a tool than a novelty item. It’s also just another Jack Black movie. This low-rent Belushi was far more engaging a thousand years ago slinging old records than remaking old movies. And that’s trying to be kind.