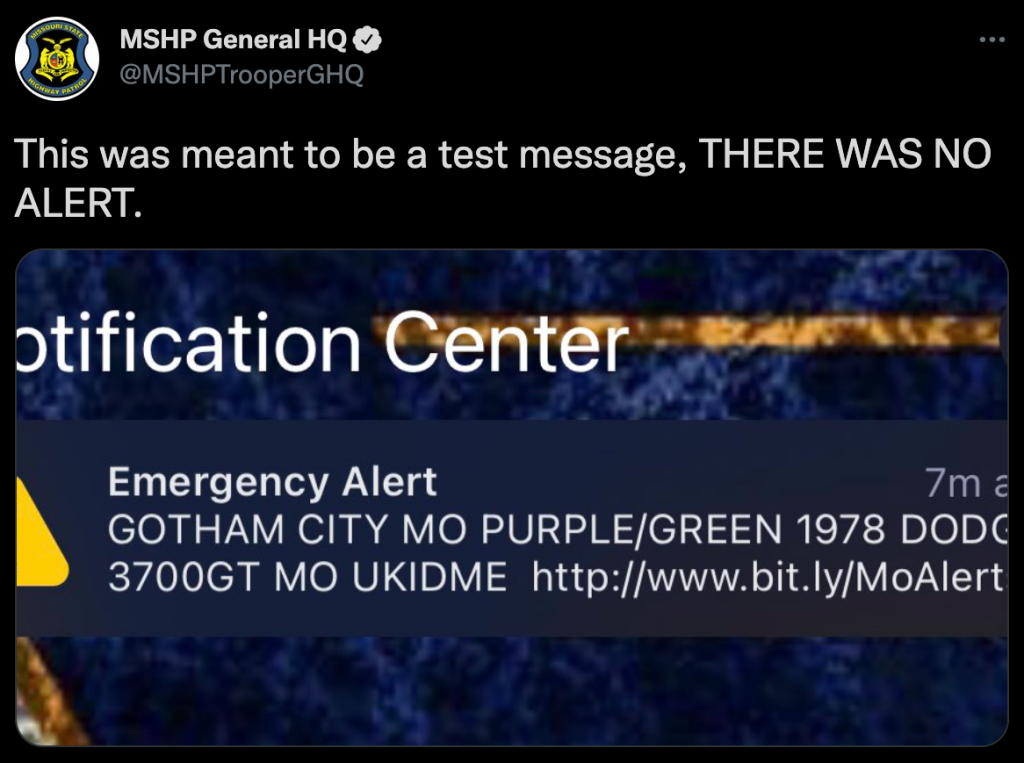 Don’t worry, Missourians, comic book villain the Joker is not on a crime spree in Missouri, despite what yesterday’s interesting emergency alert notification might have led you to believe.

The confusing statewide message made its way to cell phones just before 5 p.m. yesterday, warning to be on alert for a purple and green 1978 Dodge 3700GT with a license plate that reads, “UKIDME”, in Gotham City, Missouri. Pop-culture fans will immediately recognize the fictional location as the home of DC Comics’ Caped Crusader, Batman.

It’s quite the riddle. Things only became stranger after the official Missouri State Highway Patrol (MSHP) Twitter account published a post stating the alert was simply an odd test message.

This was meant to be a test message, THERE WAS NO ALERT. pic.twitter.com/VZMfEHI28c

MSHP went on to post a more formal statement around an hour later, explaining that the villainous warning was the result of an option incorrectly selected during a routine test of the Blue Alert system.

“Today, a routine test of Missouri’s Blue Alert system was inadvertently sent to wireless devices statewide,” the MSHP statement says. “The Patrol regularly tests the Blue Alert system to ensure it works properly when needed. During the test, an option was incorrectly selected, allowing the message to be disseminated to the public. There is no Emergency Alert at this time. The Patrol appreciates the public’s understanding and support of the Emergency Alert program.”

It’s a practical joke fitting of the character it references. The MSHP was quick to explain it away, but of course, that didn’t stop Twitter-active Missourians from chiming in with jokes of their own.

Police have a released a photo of the person they believe to be responsible. pic.twitter.com/hiITFmLjor