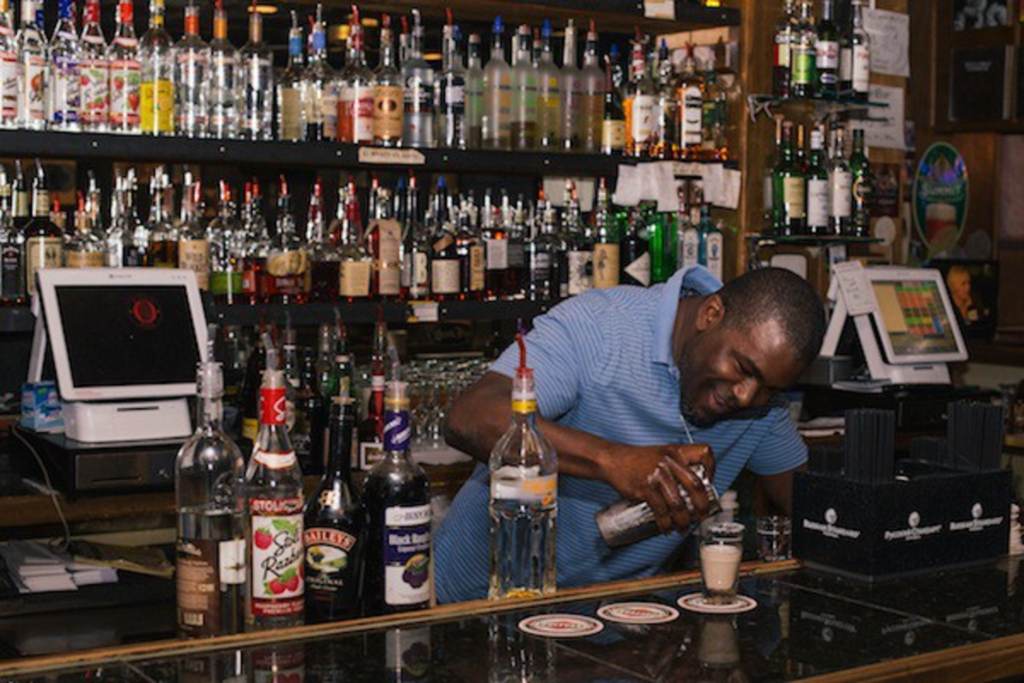 Three p.m. on a weekday isn’t really when you’re supposed to do shots.

Those liquid thimbles of freedom are better served at, say, a bachelorette party or just before a club show’s headliner comes out or over Sunday brunch. But here I am, inside a nearly empty RecordBar, looking at jiggers as the midafternoon sunlight tiptoes away through the windows. The full weight of my assignment has begun to register.

Clarence Draper, longtime RecordBar barman and, it is widely agreed, one of the coolest dudes around, slaps his hands together with a wide smile as I announce my drink order. Shots, I tell him. Three of them.

I explain myself. “I want something sweet, like a dessert shot,” I say, “and another can be bartender’s choice. And then I want a shot with something weird, a liqueur you don’t use often.” I scout the shelves behind the bar and rest my eyes on Domaine De Canton, a ginger handshake meant for a fancy cocktail, not a one-second swallow.

“And you just want me to freestyle this?” Draper asks me. “I’m just gonna make it up?”

That is what I’m telling you, I say.

Draper laughs and goes to work, and I see why he’s The Pitch’s Best Crushworthy Bartender this year. His affability shines steadily and organically. It’s something he doesn’t seem to turn on or adjust; it just is.

“The drinks at RecordBar are all about speed,” Draper tells me as he pulls down bottles for the dessert thing I have requested. (I have amended my request to ask that it be chocolate-flavored, because obviously.) “Record-Bar focuses on getting drinks to people quicker — unlike other rock venues in this town, where you have to wait 20 minutes to get a PBR. You see me behind this bar, you’ll get your drink in, like, two seconds.” He snaps his fingers for emphasis.

It isn’t much of an exaggeration. Whenever I find Draper working the taps at RecordBar or its little sister, MiniBar (where Draper holds it down on Wednesday nights), I breathe a sigh of relief, knowing that I’ll be served promptly and with a smile. Besides a kick-ass cocktail, isn’t that all you want from a bar?

“When there’s time, like at happy hour, we like to get creative,” Draper says. “Shots are one of our most popular things here, and I get a lot of people that have odd requests. I’m gonna treat you like that right now. You’ve had some drinks, you’re out with your friends, you’re having a good time, and it’s time for shots.”

He has arranged three bottles in front of me: 360 Double Chocolate vodka, Stoli raspberry vodka, Bailey’s Irish Cream. He reminds me that 360 is a regional company — based in Weston, Missouri — then pours equal parts of the three liquors into a mixer, shakes it and pours the result into a shot glass. He drizzles a nip of raspberry liqueur in the center to beautify what looks like chocolate milk. He calls this “Sexy Time.” 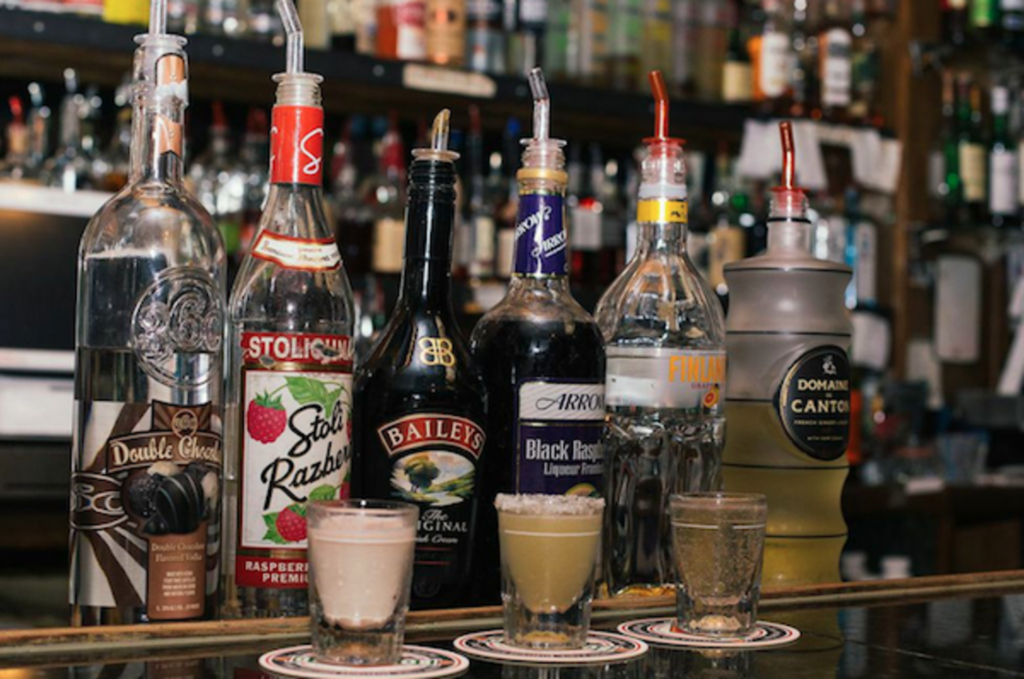 Fair name. The Sexy Time tastes like a raspberry-infused French-silk pie, smooth and delicious. I totally want another one, in a martini glass. But Draper has moved on. He salts the rim of another shot glass and begins to walk me through Shot No. 2’s ingredients.

“This is the bartender’s choice, a take on a cocktail we make called the New Booty,” Draper tells me. “It’s kind of like a vodka margarita.”

The New Booty, he explains, is Finlandia grapefruit vodka and sweet-and-sour mix. But this shot, which he has deemed the “New New Booty,” also involves a splash of orange juice and Grand Marnier. He shakes all this, pours it out, squeezes a lime over it and pushes it to me.

I’m rewarded with an acidic punch in the mouth. Then the shock passes, and the enjoyment takes hold. Once again, I want more of this drink, and I want it to last longer.

No dice. Draper climbs atop the cooler to reach the bottle of Domaine De Canton that I pointed out 20 minutes ago, back when I could still make my own decisions. He also grabs a bottle of Tanqueray No. Ten.

“Everyone wants a Moscow Mule lately,” Draper says. “Let’s take this Tanqueray Ten. This stuff has a really nice bouquet. You can really smell the juniper.”

Boom is always the third shot, isn’t it?

I stare at this final glass with no small amount of trepidation, but am surprised — refreshed, even — by its profile once I taste it. It’s crisp and friendly, almost a palate cleanser, and the subtle burn of the ginger lingers pleasantly. Draper calls it the “Ginger Fuzz.”

I feel a little fuzzy myself, until Draper claps his hands again.

“Another round?” he asks.