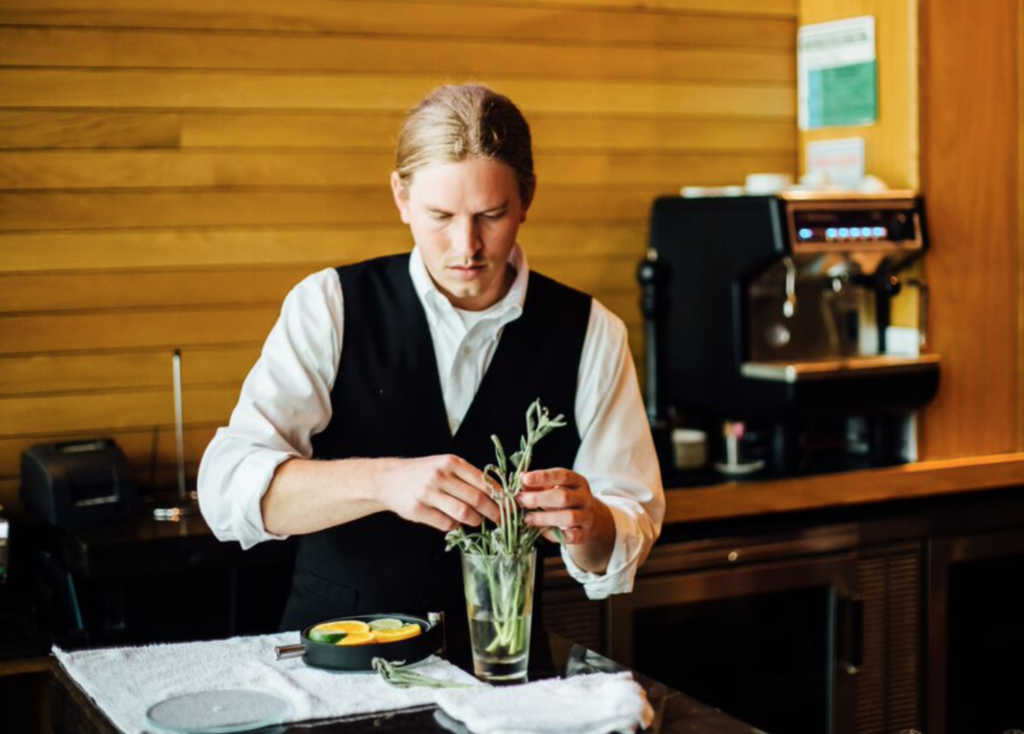 The bar at Bristol Seafood Grill is all but empty when I arrive for happy hour on a Monday — a welcome lull for bartender Austin Jacobs. He has only just arrived, and the task I’ve given him — whipping up one of the restaurant’s brand-new Porthole cocktails – requires some concentration.

The Porthole is, for starters, the vessel itself: designed by Martin Kastner for Chicago’s famed cocktail lounge the Aviary, it’s fashioned out of two thick glass plates. Filled with delicious drink ingredients — in the Bristol’s case, vodka, fresh fruit and herbs in three different combinations — it resembles a high-concept pinwheel. Beyond its aesthetics, though, the Porthole is also a demonstration of fast infusion, which means each sip of the cocktail is meant to give the drinker a new flavor. 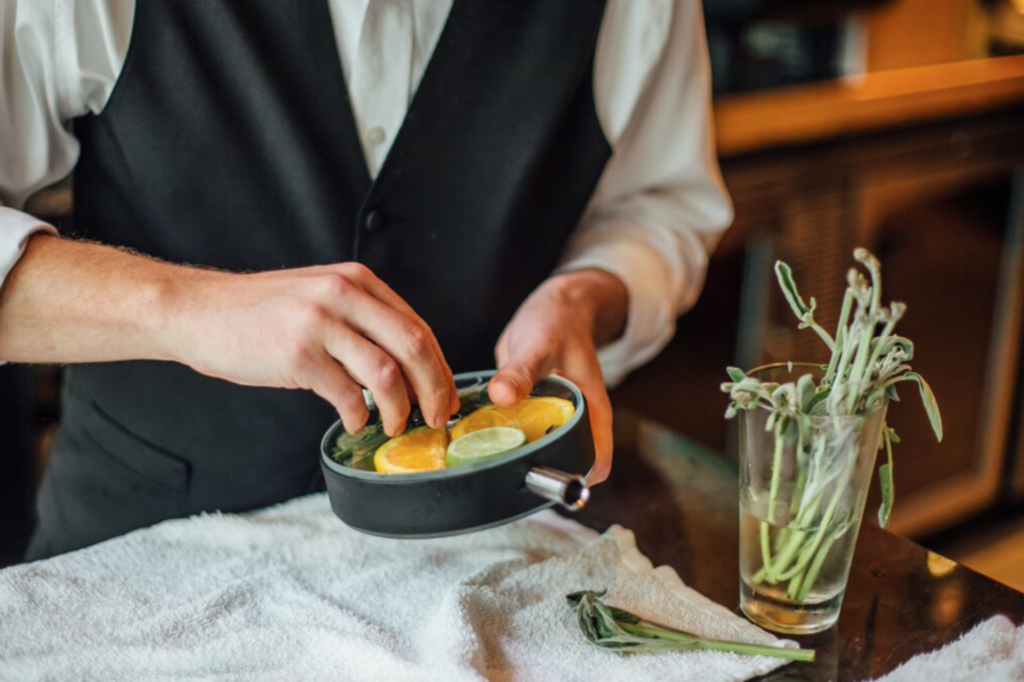 The Power & Light District’s Bristol is one of only two restaurants in the country to feature Porthole cocktails on its menu. (The other is Bristol’s sister restaurant Devon Seafood, in Chicago.) That suggests a capital-B, capital-D Big Deal, so here I am, asking Jacobs to show me the view through, well, you know.

We begin with the Orange Sage Porthole: Grey Goose, lime, sage and house-made ginger syrup. On a towel-covered bar space, Jacobs carefully unscrews the top plate and begins to artfully assemble freshly cut limes, lemons and sage. He furrows his brow and replaces the plate, spending a few moments working a tiny screw back into its place with his hands.

“As you can see, there are a lot of moving parts to this,” he says.

Once the vessel is secure, he stands it up and pours a pre-batched liquid into the spout — the vodka with the ginger syrup and the orange and lime juices.

“The idea is for this to be sitting on a table for up to 30 minutes,” Jacobs explains. “You can drink it right away, but it’s important to let it sit, because the alcohol will take on flavors of the fruit and the sage. Each Porthole has about 10 ounces of liquid and 4 ounces of booze — a little more than a regular martini, which would be 3 ounces — and we recommend pouring just 1 or 2 ounces at a time, so that you can really taste how the cocktail changes with each pour.” 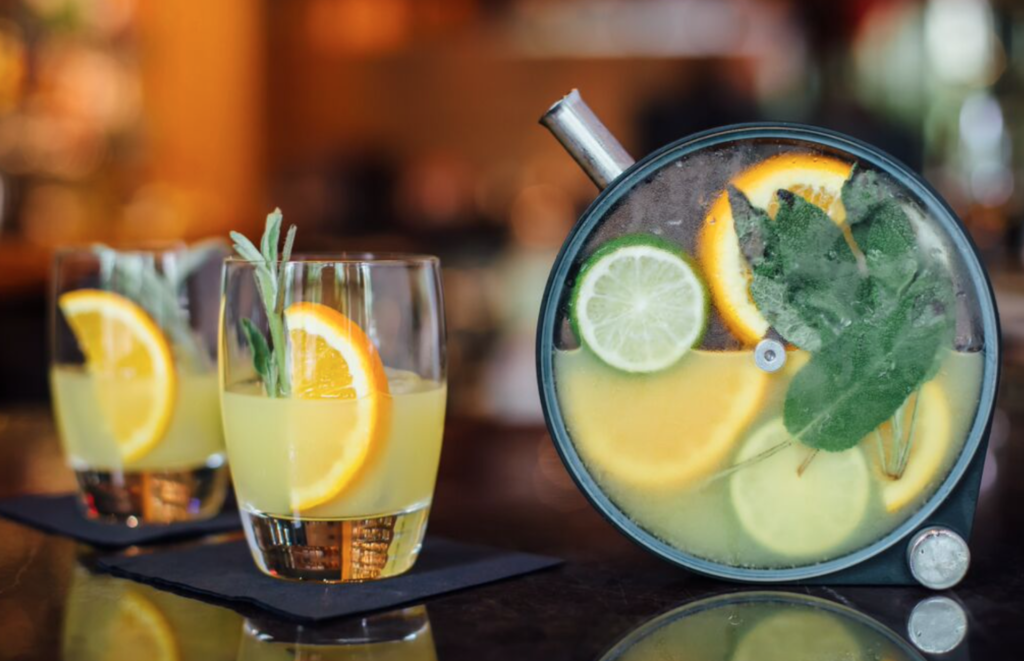 Bristol serves its Portholes with two glasses — “It’s kind of a couples thing,” Jacobs says. And it’s priced for couples, at $23 each. The overhead is steeper than usual, though, at $99 for each complex Porthole. (The Bristol has 10.)

Jacobs pours me a taste of the Orange Sage cocktail, and I’m a bit disappointed. The citrus fruit comes through powerfully, but the effect is essentially like lemonade. I figure it needs to infuse longer, and Jacobs has an idea to pass some time. He’s a whiskey lover, and he proposes a riff on a Manhattan using smoked pink peppercorns, loose-leaf Earl Grey tea, brandied cherries, cinnamon sticks and thyme. He’ll use the Porthole for this, too.

There is no batched mix for this drink, so Jacobs stirs together Dark Horse rye, white sweet vermouth and a splash of water before funneling it into the dry ingredients he has assembled in the Porthole. We stare at the concoction for a few minutes, taking in its impressive summer hues of gold, ruby and deep green. Finally, Jacobs pours a taste over ice. He has made an excellent Manhattan, but the rye dominates. 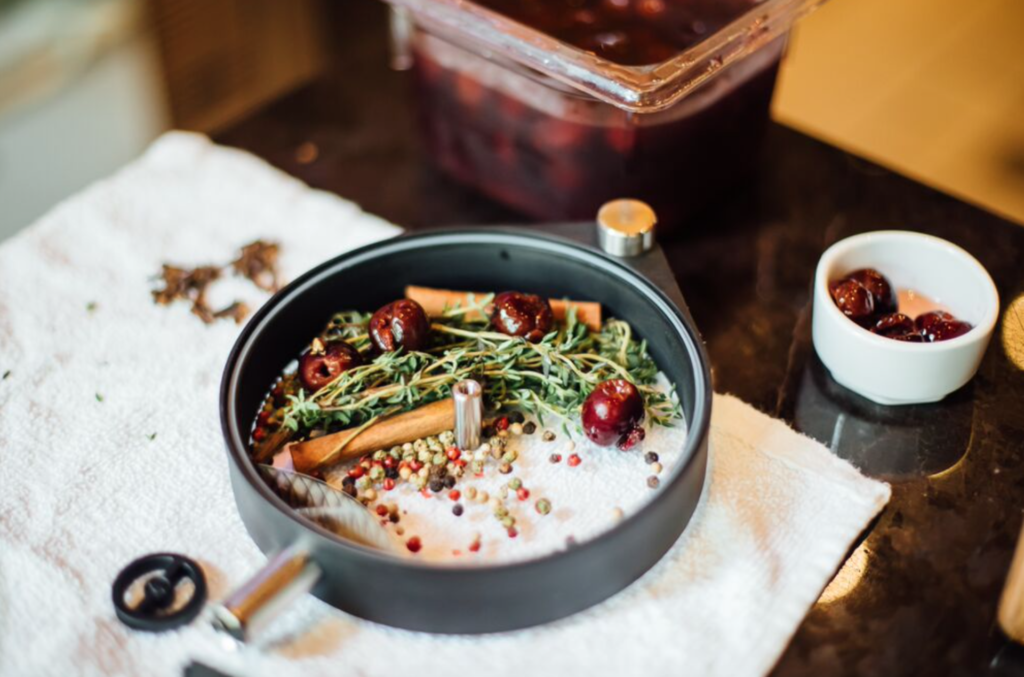 I pour another taste of the Orange Sage, and this time I can taste some of the ginger, along with some of the floral sage notes. The citrus is still big and bright, but the passage of five minutes has clearly allowed some science to occur.

Back to Jacobs’ “Golden Manhattan,” as he calls it.

We have abandoned the ice and are now pouring the rye cocktail into small tasting glasses. I can smell the pepper on this sip before I taste it, and what starts as a swift kick in the mouth pummels my throat all the way down. It’s not unpleasant, but it instills some fear of what the next sip might yield. I look at my watch and start counting down another five minutes.

After this latest intermission, Jacobs’ creation has taken on deeper, richer and more complex flavors. Traces of pepper are tempered by the thyme. In another five minutes, the Earl Grey notes come through.

“The thing with the menu Portholes is that they’re more approachable, which is important for our clientele,” Jacobs says. “They don’t want anything too crazy and experimental.” And they may not want to wait as long as it takes to experience what turns out to be a stunning succession of flavors.

“It helps to understand how flavors work together, and I think the point is that this gives you some creative license,” Jacobs says. “Like, you can take everything that makes a certain spirit taste a certain way and try to create something else. Just now, I realized we have juniper berries in back, so what if we take Samogon — a Russian grappa — and use it with juniper berries and orange zest and all the things that flavor gin? How would the grappa translate? Stuff like that.” 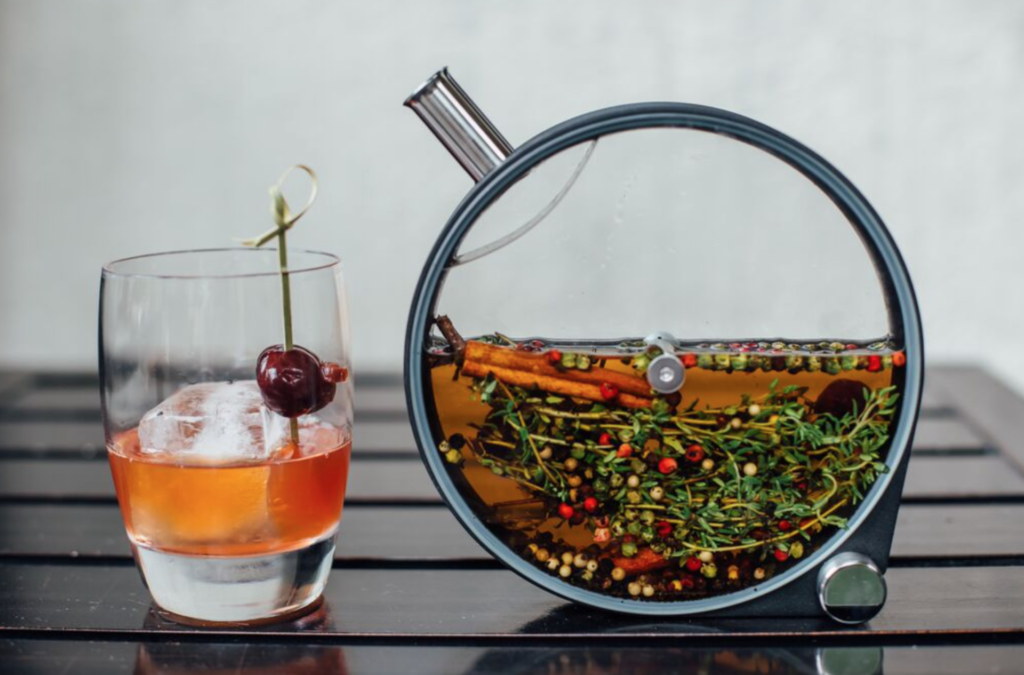 Jacobs grins, pouring out the last of his Golden Manhattan. “Also, I think this is way more work than just making a drink,” he says.

He’s right, of course. I hold up my final taste and toast the fruits of his labor.