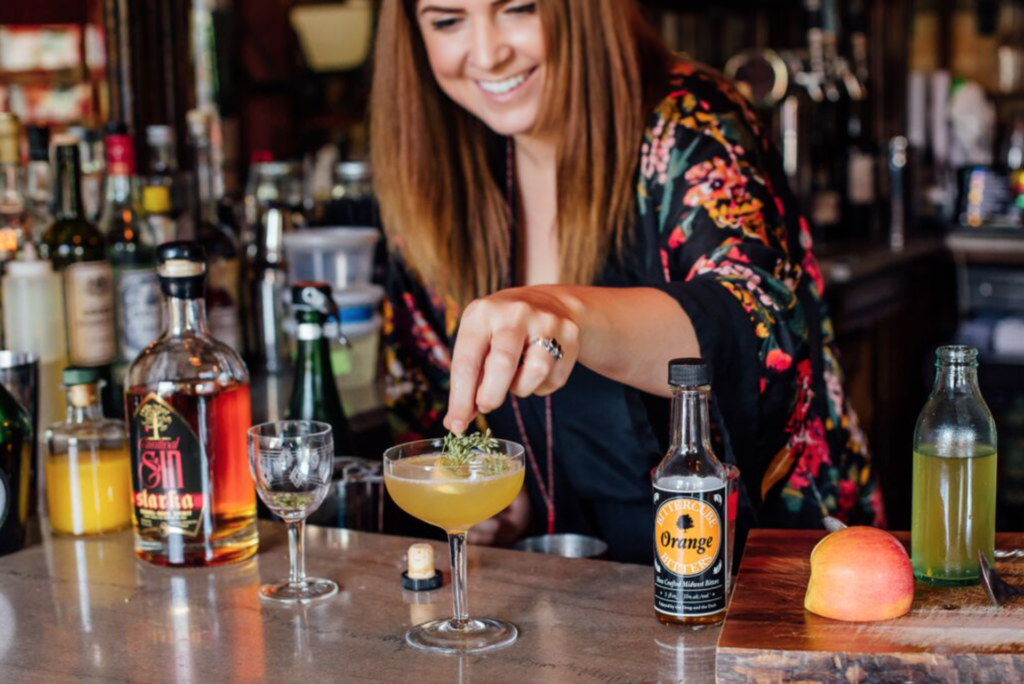 Novel bartender Hoap Wilson is generally soft-spoken, but she is bubbly when I arrive at the restaurant one afternoon a couple of hours ahead of opening. From Novel’s kitchen, she has foraged an array of ingredients specifically for my visit and the drinks I want to try: cocktails centered on in-season produce from local farms.

“I was thinking about doing a bourbon-amaro sour,” Wilson says, “and maybe using one of the bourbons.”

The fennel for that syrup has come from Prairie Birthday Farms, along with pears — some of which she has put into a jar with Old Charter 8-year bourbon to make an infusion. Peaches from Goode Acres Farm have similarly been batched with Old Charter for a peach bourbon. From Crum’s Heirlooms: green tomatoes that have been quick-pickled, and a quantity of apples.

After a few quick sips to compare the pear and peach infusions, we settle on the peach, which delivers a louder fruit profile. Wilson goes to work while I examine some of her stock. There’s not much room for product in this compact restaurant’s bar, so Wilson is particular in her choices: a young and an aged grappa, several top-shelf Scotches, an intimidating bottle labeled Cardinal Sin Starka. I make a mental note to ask Wilson about pairing some of these spirits as she pushes her first drink toward me. 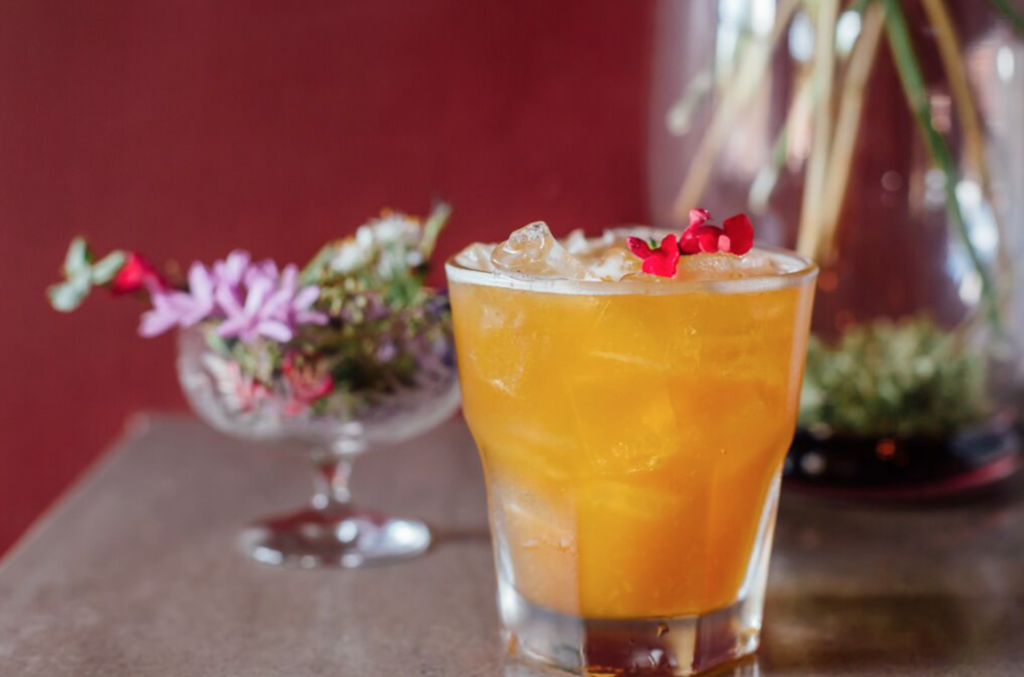 The Day After Amaro — named for the addition of the Italian Sibona Amaro liqueur — comes in a rocks glass over crushed ice, garnished with a few dainty red blossoms. The liquid is a sunset orange. It looks thick and juicy, but when I taste it, the flavors are subtle: Wilson has used both lemon and orange juice to build in some sour, though the amaro — a sweet, herbaceous liqueur — ensures the result isn’t puckery. Wilson has also sweetened the drink with Chinese five-spice-infused simple syrup, which brings some warmth, with fennel and clove notes. None of these components overpowers the peach bourbon; rather, the drink is balanced and easy to sip.

For the next round, I’m curious about the Starka. The bottle — squat, with a black label and a vaguely Cyrillic font — makes it seem like an old-school Russian vodka, but the liquid is brown.

“It’s aged vodka,” Wilson tells me as she pours a taste. “Starka is the style. It comes from the tradition in Russia, I think, where, whenever a child was born, they’d take a bottle of vodka, put it inside an oak barrel and bury it in the ground, where it would stay and age until they got married.” Wilson pauses. I should fact-check that legend later, she tells me, before going on. “This is actually from St. Louis Distillery, so this vodka has been aged six months in oak. It’s not like a regular vodka at all. I think it smells like figs or dates, and it kind of burns like a whiskey at the end.”

The nose on the Cardinal Sin Starka does not inspire me. I smell not figs but fear — my fear that this will not agree with me. Oh, well — down the hatch.

“Oh, that’s actually really nice,” I tell Wilson, and I am not lying. Aging the Starka has given it some whiskey-like characteristics — caramel notes, a hint of vanilla. Wilson’s plan for this is to pair it with the Crum’s apples, her fennel-frond syrup and fresh fennel seeds from Prairie Birthday Farms. She slices one of the apples and places about half of it in a shaker with candied-lemon simple syrup, fennel seeds and a squeeze of lemon juice. 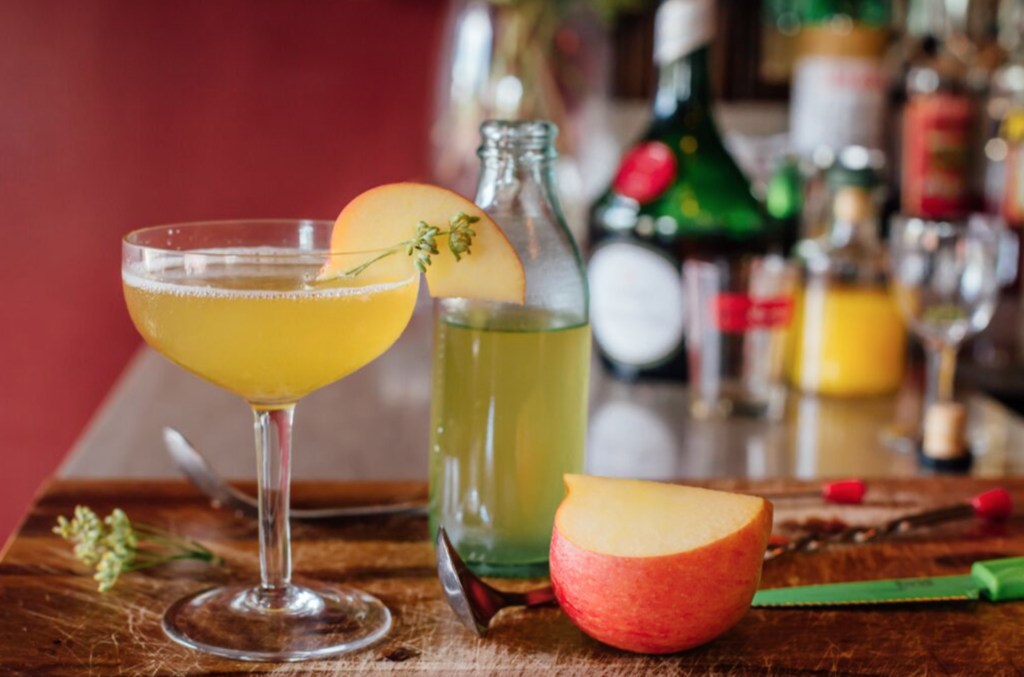 “You want to have the lemon with the apple when you’re muddling it, to brighten it up and keep the apple fresh,” Wilson tells me as she works. She adds the fennel-frond syrup, Starka and a bit of Bénédictine — a French herbal liqueur — and shakes it all together. She strains the light, toffee-colored liquid into a coupe glass, then tops it with a splash of cava.

The key with this drink — she calls it the Ned Starka (a Game of Thrones reference that I find delightful) — is, again, subtlety. It’s light and refreshing, with plenty of apple flavor and just a tease of fennel. Wilson seems to have mastered the art of a well-balanced cocktail. As a 10-year veteran of the industry — and the former beverage director of the now-closed Pachamama’s in Lawrence — this is not wholly surprising, but Wilson offers another part of her story.

“At the time that I started bartending, I was a vegan and I had been for a really long time,” she tells me. (Wilson is 30.) “Flavors were super important to me because I liked to eat food and I didn’t want to be boring. So I like all these flavors — I like gardening and I like going to the farmer’s market. Incorporating super-fresh ingredients into cocktails was really important to me. I’m lucky to have the opportunity to do that working here, because that’s definitely where my interest is.” 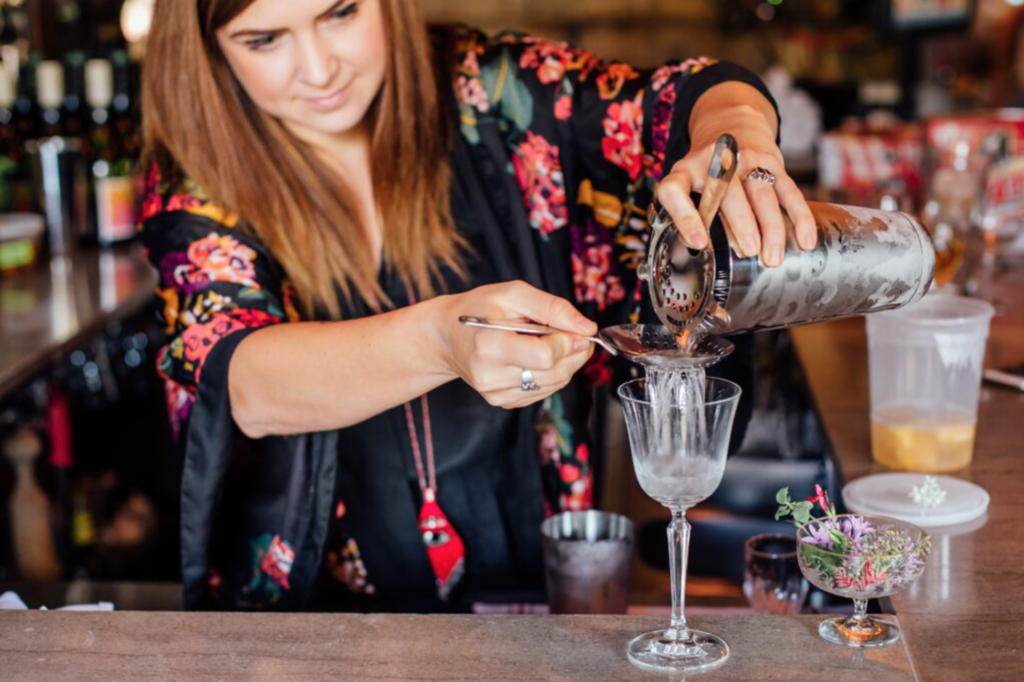 Our final cocktail tests Wilson. The Crum’s green tomatoes she has quick-pickled have yet to be used, and they look like sickly jelly-fish in the chartreuse-colored liquid. This is not encouraging. Wilson wants to do a play on the classic Gibson, a savory martini usually made with cocktail-onion brine that should be her simplest recipe of our session: two ounces Tito’s Vodka, a pinch of the fennel seeds and a barspoon of the tomato brine, shaken and strained into a martini glass she has rinsed with Dolin Blanc vermouth. Wilson takes a straw and tastes the drink — and nearly gags.

“Oh, that’s weird,” she says, grimacing. I ask her if she likes it. “Not really,” she confesses. “I mean, it’s fine. The fennel seeds didn’t really strain properly. It’s weird.”

The drink itself looks beautiful and elegant. The liquid is pearly, and I’m not bothered by the few fennel seeds that escaped Wilson’s strainer to float on top. The scent reminds me of sweet onions. But Wilson’s reaction has prepared me for something horrifying, and I steel myself as I take a timid first sip of the Doctor’s Wife — only to be surprised by the gentle, silky profile. The sourness of the tomato brine is mellow here, and the fennel lends a soft spice. This is a worthy cocktail, I tell Wilson — perhaps my favorite so far. I advise her to add it to her menu. She laughs a little as she begins to clean up her bar. 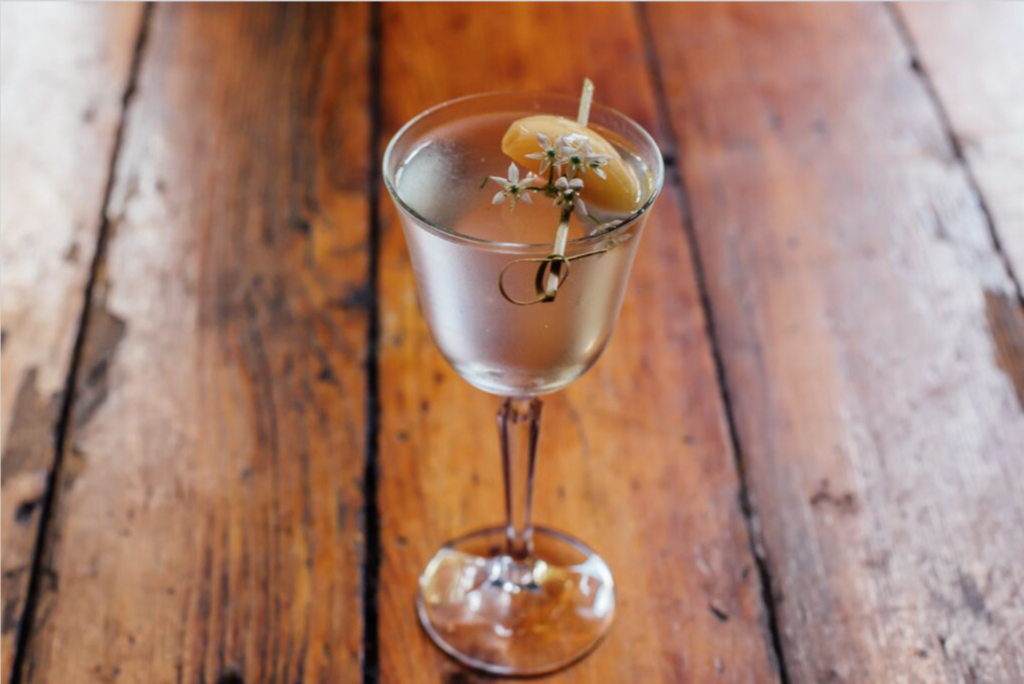 Recipes are on Page 2.

THE DAY AFTER AMARO

Wilson: Combine all ingredients into a shaker. Shake until frothy. Strain into a rocks glass filled with ice.

Wilson: Rinse a martini glass in Dolin Blanc vermouth. In a shaker, mix together the vodka and the tomato brine. Shake, strain into martini glass, garnish with onion blossoms and green tomato.

See also:
Bartender’s Notebook: At the W bar, Mike Strohm’s cocktails are the best kinds of show and tell