Bartender’s Notebook: Behind the bar at 715, Katrina Weiss holds nothing back 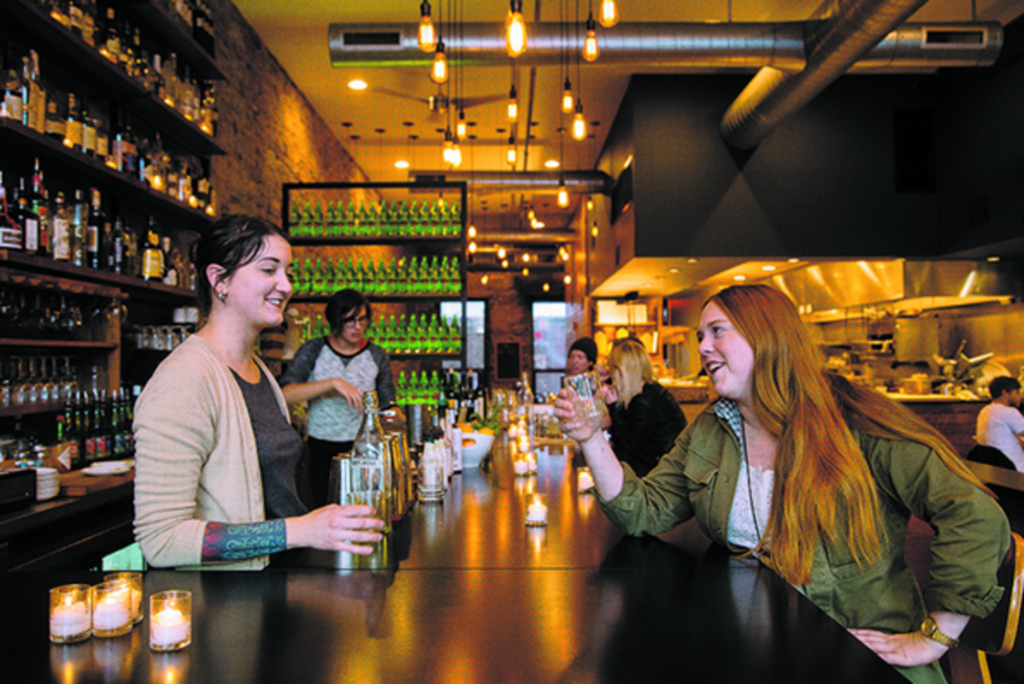 It’s a hazy, gray Monday when Caitlin Corcoran and I arrive at Lawrence’s 715 Restaurant to meet Katrina Weiss, the recently promoted bar manager there. Corcoran throws herself onto a bar stool, eyes bright, smile wide. She has known Weiss since 2008, when the two were both University of Kansas students working a block away at Vermont Street BBQ, but they don’t get together much these days, Corcoran says, separated as they are by a state line and a 40-minute drive.

But we’re not here to catch up. Corcoran and I have arrived on a mission: drinks, and not the rail booze-and-soda-gun kind. We’re here because I want a different perspective — a bartender’s perspective — on how to order drinks. Who better to help than Corcoran, former bartender at Port Fonda, now the general manager at Ça Va and this year’s Paris of the Plains bartending competition winner.

Weiss places espresso shots in front of us. We’ll want to be awake for this, she jokes. And she begins preparing the first drink shortly after. Corcoran’s time at Port Fonda has made her a mezcal believer, and we all agree that the first drink should involve that spirit.

“Since everyone’s sipping espresso right now, I figured we should stay on a similar flavor palate,” Weiss says as she pushes over a coupe glass filled with a dark, chocolate-colored liquid. A layer of light-brown froth sits at the top, imitating the crema of an espresso, and Weiss has balanced a toothpick-speared cherry on the edge of the glass.

“I made this with our house-infused coffee tequila, which is just made in a similar way that you would make cold-press, fusing tequila with coffee grounds and letting it sit for two hours,” Weiss tells us. “An ounce and a half of that, half an ounce of Luxardo — which is a maraschino liqueur, made from the pits and stems of maraschino cherries. And then it also has Sombra Mezcal and a little bit of agave.” 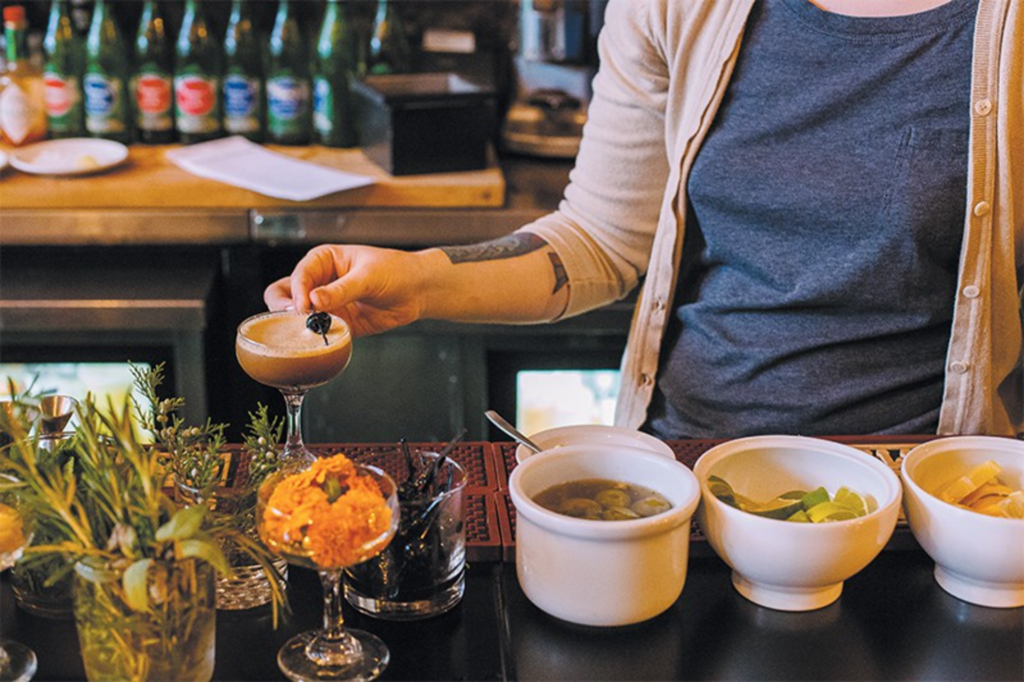 Corcoran tastes the drink, then asks an array of questions. What kind of tequila, she needs to know. (Camarena, the Blanco.) Is the fusion prepared like a cold brew? (It is.) Corcoran asks for these specifics casually, like a teacher about to surprise a Friday-afternoon class with a pop quiz.

Weiss calls this drink the “Arandas Café,” and it does indeed beg a few questions. It has the look of a dessert cocktail but not the sweet taste. The emphasis is on the booze, and the texture is a lot like espresso, actually: smooth, velvety, luxurious. But it’s not heavy.

“I usually think of Luxardo for lighter, springtime drinks,” Corcoran says. “I like it in this application because it’s a little more fall-oriented, and deeper. The mezcal plays really nicely with it, and it has a nice sweetness that’s not distinctly cherry, you know? You really have to think about the cherry if you want to taste it.”

We keep talking as Weiss sets to work on a second drink. She seems tall behind the handsome wood bar. A sleeve of dark blue and green ink extends to her right wrist, and she’s wearing neutral colors, her dark hair pulled back in a practical bun. Soon, she has readied a mezcal-pisco concoction, worlds away from the Arandas Café.

“This has mezcal, pisco, Cynar, honey and a little lemon juice,” Weiss says. She calls it “El Pionero.” It looks like liquid gold in a lowball glass and tastes about as rich. Though the drink is equal parts mezcal and pisco, the mezcal — usually an intense, smoky flavor — is understated. It interacts with the toasted, sweet profile of the Cynar, letting the lighter pisco dominate. 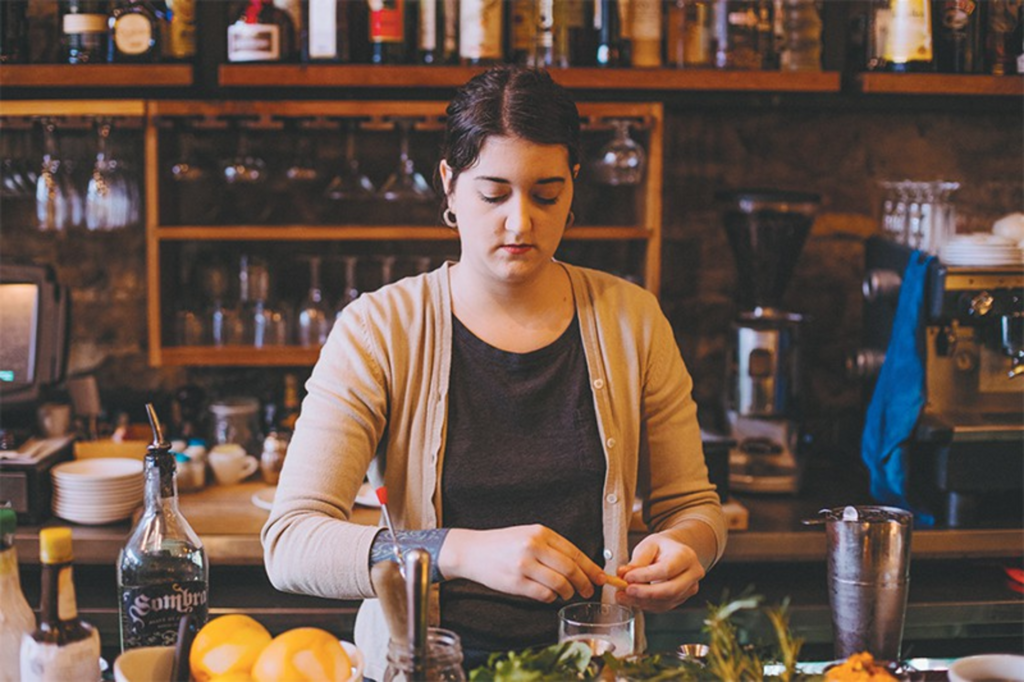 “This is a great aperitif,” Corcoran says. “It would definitely be a great start to the meal. It wouldn’t get me salivating too quickly. I think the goal of cocktails in general is to get people to like certain spirits, and then maybe to make them branch out from there. Especially at a place like 715, which is Italian-focused, this is a great way to use mezcal in a cocktail in an unexpected way. And honestly, this drink just makes me want to eat tons of pasta.”

Weiss knows what she’s doing, and I’m not sure I can think of anything that would really challenge her. That’s why Corcoran is here, so I tell her to order a drink from Weiss that no one else would.

“I want you to make me a drink that resembles our friendship,” Corcoran says in a playground voice. Both women laugh, and Corcoran goes on: “You should make me a crazy drink that you’ve been thinking about but you can’t put on the menu because it won’t sell, because it’s too weird or too high in liquor cost to do it. Something you want to put on the menu that would be your baby — if you could.”

Weiss takes a few moments to look around at her bar and then disappears. When she returns after a few moments, she’s carrying a jar of hops — the lime-green, cone-shaped plant used in beer — and another jar of clear liquid. It’s a new, house-infused hops vodka, Weiss tells us, and she has been experimenting with it. She whips up one drink, abandons it and restarts. At last, she pushes an acid-green-filled martini glass toward us, garnished with a floating hop. This drink, Weiss tells us, contains the hops vodka, St-Germain, Luxardo and lime juice.

“I really like the delicate notes in this,” Corcoran says. “I feel like you can really taste the hops. It’s thick. There are some beautiful floral qualities that are really coming through. The [St-Germain] elderflower bridges it all together. That drink has me thinking: What if you infused the Luxardo with hops or gin with hops? Or elderflower with hops?”

Weiss and Corcoran bend their heads together over the bar, two intrigued crafters brainstorming would-be drinks. I sneak this martini, the “Hop to Me,” over to my seat, and watch them dream.

Weiss: “Combine ingredients in a shaker with ice. Shake, serve up in a coupe glass. Add chili powder to make it spicy.”

Weiss: “Combine all ingredients in a shaker with ice. Shake, serve in a rocks glass, garnish with orange zest.”

Weiss: “Combine all ingredients in a shaker with ice, strain into a martini glass. Hops garnish.”