Barry Williams is just too normal In Married Alive! 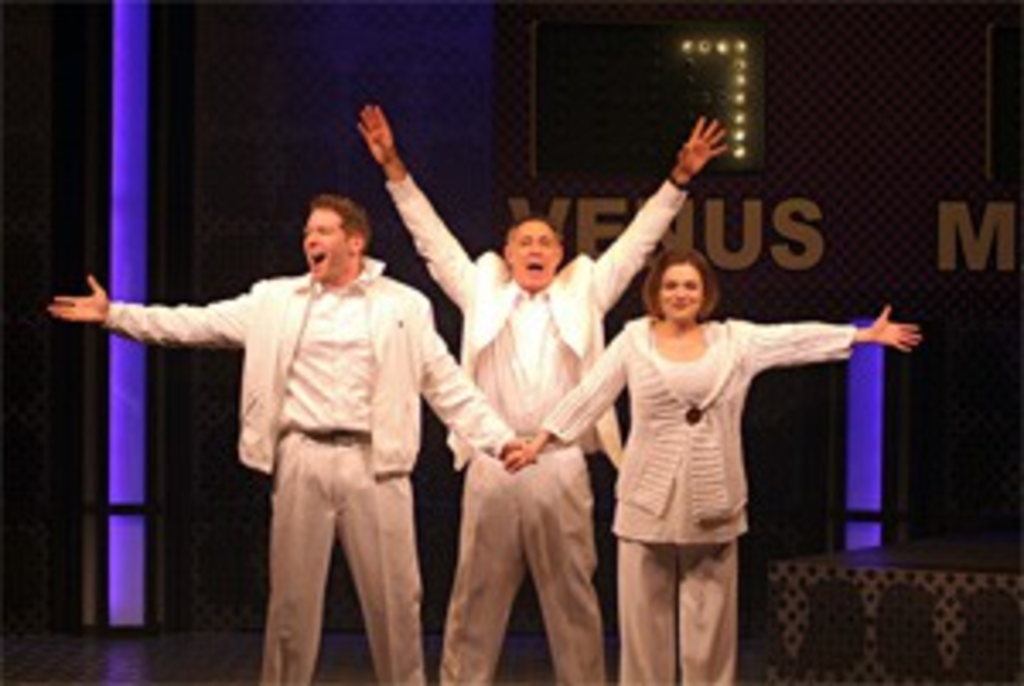 Three surprising things that I have lived to see Barry Williams do: (1) imitate Chewbacca; (2) rap, kind of; (3) move an audience simply by being — or, more to the point, having been.

More on that last one later. But there’s one notable thing that isn’t on the list, something the one-time Greg Brady might have done in the New Theatre’s Married Alive! that would have generated fresh memories instead of faintly suggesting old ones: Dude could have broken a sweat.

Seriously. He still has some charm, but the easygoing Williams here works only as hard as a high school coach teaching social studies. To be charitable, maybe that’s the point. After all, Married Alive! is one of those light, comic musicals that riffs on a single theme for 90 minutes, and he’s playing a regular, Midwestern guy who’s been married to the same woman for decades. If he seems detached, maybe a little bored, well, take a look at the couples in the New Theatre audience. The women mostly smile at the show, commenting at times about how the marital gags have truth in them. More than a few of the men look like they’re counting down how many numbers are left. Honesty compels me, then, to add a final entry to the list of things I never thought I’d see Williams do: achieve verisimilitude.

Like a Reader’s Digest humor column with songs, the show pokes gentle fun at men, women and marriage, joking about credit-card debt and waning sex drives but insisting that, for all its annoyances, marriage is (SPOILER!) totally worth the trouble. Writers Sean Grennan and Leah Okimato manage one sharp verse per song, one sharp song per act, and maybe four memorable scenes. For the rest of the show, they get by simply offering up the familiar.

In short, everything imported for this show feels as rote as too many real marriages. The local talent, however, almost gets this over. Cathy Barnett and Jessalyn Kincaid, two of Kansas City’s best comic actresses, attack their roles (and scene partners) with third-date friskiness. Barnett, in particular, is excellent. Teamed with Williams in an “experienced” couple, she faces the trials of matrimony with tart wisdom, laughing warmly and puckering up her mouth. Early on, she introduces a sketch by announcing “We don’t need money. We have love,” then lets fly with that sweet-and-sour cackle. Somehow, she brings down the house with this, an achievement right up there with terraforming Mars. She finds life where there is none.

Director Richard Carrothers hustles the show along, emphasizing its heartwarming elements. Compared with the raucous American Heartland production two years ago, this Married Alive! is nicely reflective, sometimes digging into real feeling. An odd scene comparing motherhood to a war movie was a muddle at the Heartland; under Carrothers, the emotional logic is clear and affecting. Later, an extended bit about annoying Christmas celebrations builds to winning farce. The set is slick and spare, like a prime-time game show, whereas the Heartland’s was cluttered. The ribald jokes remain, but some of them are downplayed — the dirtiest, a climactic line, sung hornily by Barnett, about her cupcake needing filling — sneaks past the Johnson County crowd.

Too often, though, the ladies labor to get us through uninspired songs, and the men — Williams and Allan Snyder, an out-of-town ringer who hits his notes but never delights — schlub through. As the show wound on, I kept recasting it in my mind: How about James Wright, so good in the original? Or Jim Korinke, who always elevates sitcom-level writing? Why, I found myself wondering, do people turn out to see the star of some old TV show that wasn’t much good to begin with, full decades after its cancellation?

Then something strange happened. During some treacly, unhummable duet about how couples get older together, the New Theatre craftspeople projected through-the-years photos of Barnett and Williams on a screen hanging center stage. Barnett’s came first, black-and-whites revealing how a beautiful girl became an even more beautiful woman. Than came Williams: the young surfer himself, wreathed in a lei, smiling hugely in Hawaii. A deep hush settled over the crowd. There were those thick black eyebrows! That awkward yet cocksure Greg Brady grin! That nice-enough man up there on the stage, a man inhabiting this shared memory, a man we feel like we knew once, and somehow for a moment felt like we knew again.

I was moved, weirdly but truly. Maybe it was just nostalgia, coupled with cabernet and the pleasures of a fine dinner dished out by the New Theatre’s chefs. Or maybe it was richer, the pleasure of seeing an acquaintance from way back and realizing that maybe he or she meant more than we realized. Or maybe it was the gulf between the expectations of our younger selves and who we wound up being. Young Greg Brady yearned to be Johnny Bravo; we all yearned for whatever. Is it rude to suggest that we might have dreamed bigger than being married alive?