Barry Anderson’s The Janus Restraint: The Ascension chips off some Iceland for summer 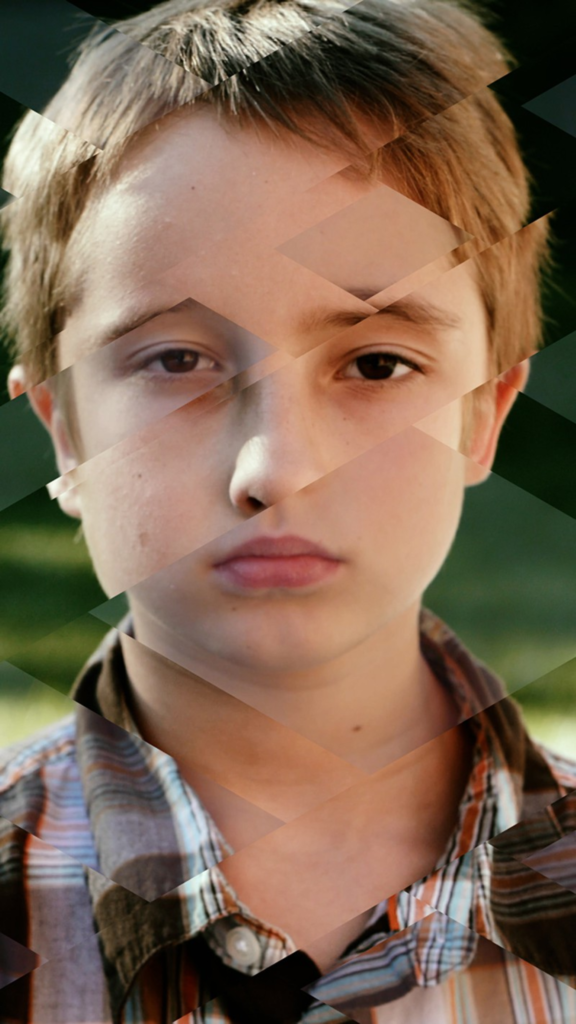 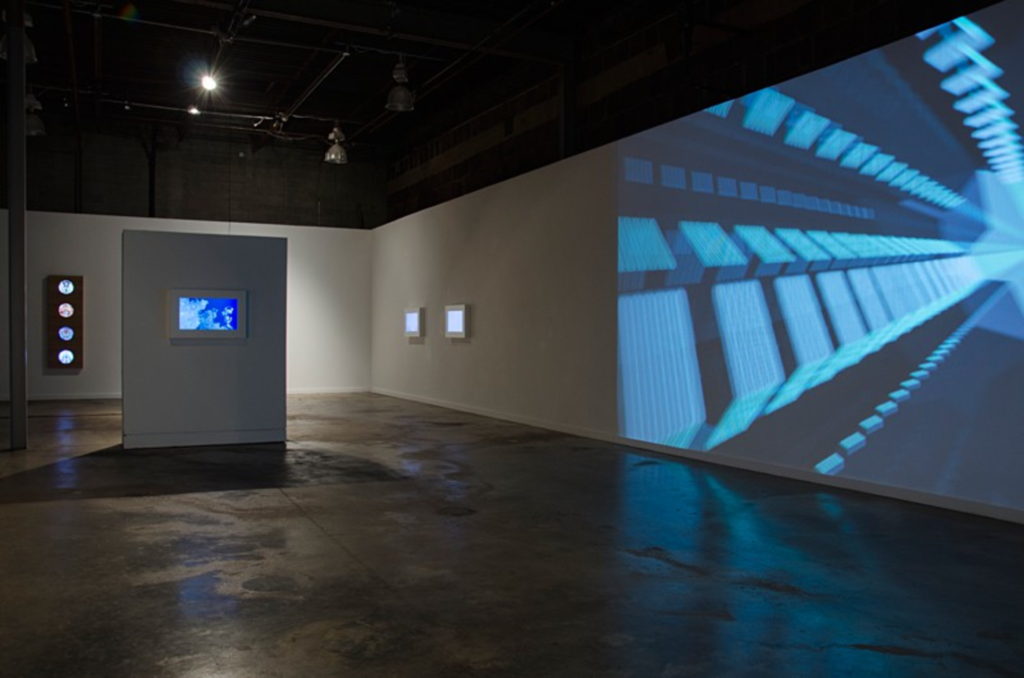 Barry Anderson is known for his bright, colorful video works: bars and diagonals and bubbles, light-rich abstractions that act as moving collages. His art features regularly in group exhibitions around the country and is in a number of museum and private collections, and recently he has collaborated with bands such as the U.K.’s Written in Waters, making abstract videos for their music.

With his new The Janus Restraint: The Ascension, at Studios Inc., Anderson expands beyond what he has called “a video mindset.” Yes, there’s video here, as well as sound and still photography and sculpture. It’s the beginning of a bigger project (including some online-only aspects, visible at thejanusrestraint.com), he told a group gathered for a gallery talk May 11. And part of the impetus for it is simple enough: His son, Finn, is growing up.

We see that for ourselves just inside the cavernous exhibition space, where a single-channel video plays on a movable wall. In “Finnean,” a portrait of Anderson’s 9-year-old son, the boy looks directly at the camera, at us, and we see him split prismatically into patterns, mostly horizontal diamonds moving downward. Sometimes layers from other scenes of him slide by, and the green of a lawn in the background suggests summer afternoons of play. There is a vision of him sleeping, onto which Anderson has painted a few glimpses that suggest the unknown thoughts behind an innocent gaze, the changes to come. At one point, the vivid green of a Halloween mask is spliced in — a Frankenstein’s creature set upon the world to find an identity.

A narrative about the passage of time is universal, but Anderson spares us what could have been, under less skillful orchestration, so intensely personal as to be irrelevant. Janus isn’t someone foisting family photographs on you or hijacking a conversation with rambling stories about his child’s accomplishments.

For one, the sheer beauty of Anderson’s crisp images is seductive. And we identify with the boy, imagine what he might be thinking (the direction effectively takes us to the idealized rather than to the actual — this version of Finn is a fiction), remember what it was like on the cusp of adolescence.

Janus is the Roman god of beginnings and transitions, usually represented with two faces, one looking to the past and the other anticipating the future. It’s a symbol that Anderson uses to straddle, among other things, that cusp, that middle ground between youth and adulthood.

In this show’s four “Totemic Sonar” single-channel videos, for example, circular screens are set into solid wooden box frames and arranged vertically on the wall, and we see arrow shapes and expanding circles pulse by quickly. Catching the images in the bits behind the more solid-colored shapes offers its own intrigue. Is this the Earth from orbit? the woods? The arrows split the space, and the circles corral it back again, endlessly.

Tinged by ambient music coming from “Fragments of Space [ST2],” which is projected hugely on another wall, are the chanting tones of a child reading … something. That voice, in an effect that, at least in terms of sound, recalls Hugo Ball’s lobster-suit dada performance, is reciting Icelandic historian and poet Snorri Sturluson’s 13th-century Prose Edda Gylfaginning. The child’s voice, played through 24 little round speakers piled together on the floor, is charming but also feels a little distant, perhaps owing to the language and the mythology outlined in the story. Sturluson composed his Gylfaginning to reconcile the Icelandic Christian society of the time with its earlier culture; its narrator talks about the journey from the mainland, about gods and kings, and he quotes the older sagas.

One of the stories recounted is about Hjúki and Bil, two children taken up into the sky by the gods as they were coming from a well called Byrgir. This could be an origin of the Jack and Jill nursery rhyme. For Anderson, it’s a piece of the prism through which we find contemporary rites of passage.

The urge to capture and repurpose myth, while finding a way to spend time with his son, is not new for Anderson, but much of the raw visual material he’s using here is. Almost all of this work was created in the past two months, thanks to the experimental freedom afforded by the Studios Inc. program. Part of his recent palette is Iceland itself; he spent February at the Nes Artist Residency in Skagaströnd.

Geologic time is self-evident in Iceland, where the landscape has been shaped by thousands of years of volcanic activity. It has the world’s oldest known geyser and as recently as June 1967 added a new, mile-wide island to its southern coast, the result of an underwater eruption that lasted more than three and a half years. It also bears the marks of human time. When settlers arrived in the late 800s, the place was one-fourth trees; today only 1 percent of the land is forested, and erosion caused by farming and grazing over the years makes it difficult to add to those numbers.

For non-natives, though, Iceland’s vast rocky sweeps, volcanic peaks, ocean cliffs and glaciers offer inspiration. And the metaphors inherent in the landscape gave an outline to Anderson’s quest.

Three of Anderson’s single-channel videos here use only his Iceland footage. “Kristalsform” addresses transience by dramatizing the melting of ice. “Mývatn” (named for the shallow lake created by a volcanic eruption 2,300 years ago) shows a fissure spewing geothermic steam in symmetrical formations manipulated by the artist. “Spákonufell,” named for the mountain it depicts, recalls a character in Skagaströnd’s sagas, a prophet-witch who climbed the peak daily and hid her gold there using a spell. Anderson centers the mountain in the frame and splits it into a blue, snow-capped reflection of itself, shimmering under a layer of surreal water droplets.

There’s also a periscope titled “Bifröst,” a large white viewing apparatus that requires you to kneel on a silver pillow and look up into the green, zooming Northern Lights. Anderson believes that everyone should see the aurora borealis. (“It’s transformative,” he told the May 11 audience.) Even captured on video, it’s stunning.

Leaning closest to narrative is the video “Entries,” which begins with a boy (Finn, in acting mode) chipping at a tree stump. He and another boy dig with sticks in the mud. Images of Finn entering an overturned hollow tree suggest a journey. Later we see him asleep as Icelandic landscapes sweep by, and then swinging a baseball bat before the foggy fields and the sea return.

The actual baseball bat is installed, midswing, in a surreal interaction with a mirror. Called “9 Is the Key,” it acts as a “through the looking glass,” “break into the next thing” summary. And whatever Thor’s-hammer notion might be at work, baseball includes its own mythology, one that includes the ties between father and son.

Anderson says he plans to continue the project over the summer. Steep yourself in this introduction, this enchanting thoughtscape, to be ready for the next chapter.