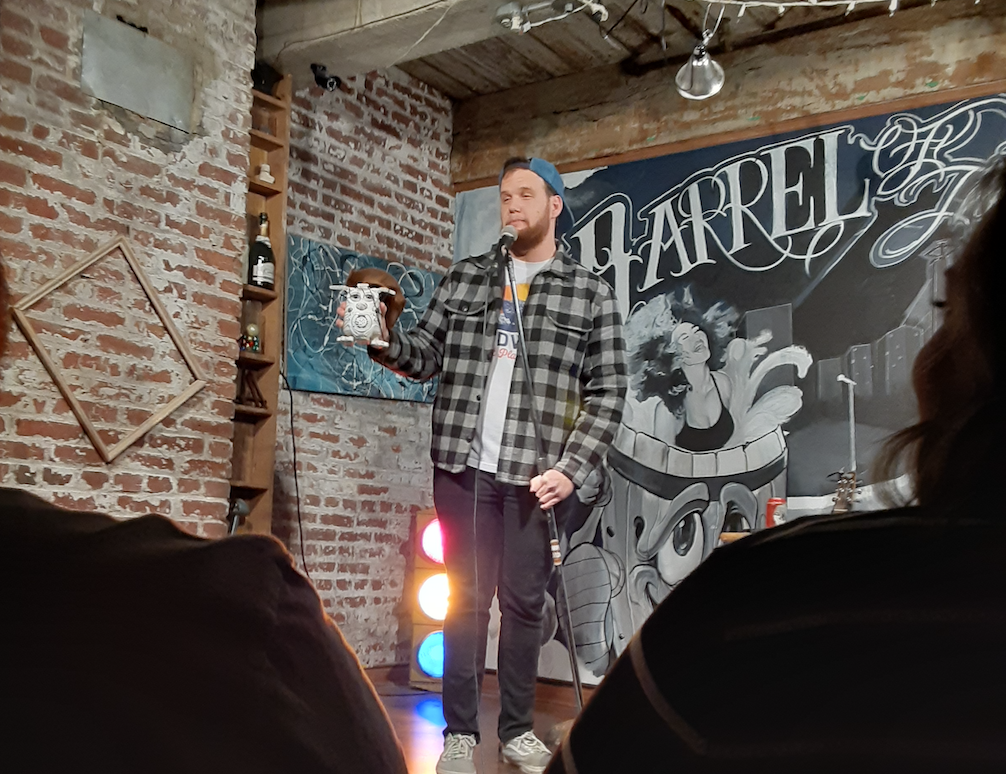 Stephen Taylor on stage at BotB holding a white Furby for some reason. // Photo by Nichole Force

We’re living in strange times. The ongoing pandemic has left more people than ever feeling isolated and alone due to remote work and public health measures. Even the most emotionally resilient among us are succumbing to stress and anxiety induced by the persistent state of fear.

Luckily for Kansas Citians, there’s a unique local escape from reality where one can instantly reconnect and renew through fun and frivolity with fellow humans. A place that feels remarkably similar to hanging out in the uber-cool loft apartment of the funniest group of friends you could possibly imagine.

That place is Barrel of the Bottoms (1427 West 9th St.), a comedy venue located in the historic Hobbs building in the West Bottoms. Founded in 2017 by local comic Stephen Taylor and Cary McRoberts, BOTB has a casual, welcoming vibe that makes all who enter feel like family.

Offering comedy showcases and open mics while providing collaborative studio spaces for all interested Kansas City performance artists, Barrel of the Bottoms has quickly gained a reputation as a growing hub for the indie arts scene.

But the best part—the secret sauce that keeps its many fans coming back for more—is the quality of the comedic talent on display. Taylor and McRoberts mastered the art of identifying and acquiring top-grade performers. This was displayed Friday, December 3, when Los Angeles-based comic Michael Longfellow served as the headliner for a show that featured local KC up-and-comers.

Longfellow, who’s appeared on Conan and was chosen as one of TBS’ “Comics To Watch,” instantly won over the audience with his self-deprecating, but slyly clever and mischievous style. His tales of deeds done on the family computer chair when he was a teen, his reasons for regretting that he got a dog, and his personal opinion on babies wearing suits to weddings garnered some of the biggest laughs of the night.

He masterfully massaged the room throughout his set, and they loved every second of it. Count on seeing a lot more of Longfellow in the future. This guy’s got the goods and knows how to deliver.

The night’s entertainment also included an uproarious set by Taylor that included a visual joke involving an oddly-edgy furless Furby and the revelation that the venue was the former apartment of BOTB co-founder Cary McRoberts. A top-tier KC comic, Taylor has an uncanny knack for reading a room and responding with ease. 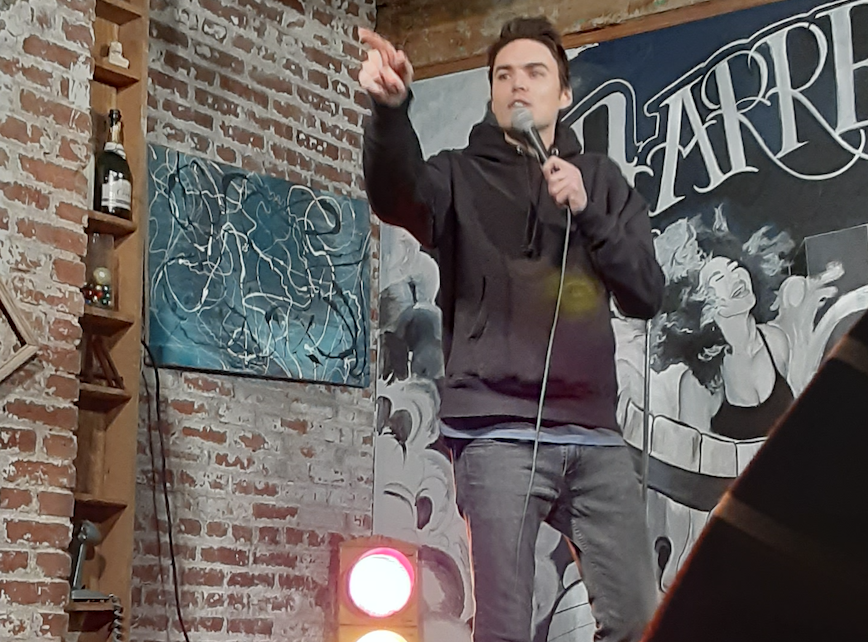 In addition to performing stand-up regularly at BOTB, and serving as the house MC and feature at the KC Improv, Taylor is co-host of the Set to Destroy podcast. In Set to Destroy, he and comedian co-host Ryan Trickey invite comics to submit videos of their worst sets for comedic review and analysis. Previous episodes can be seen on the BOTB YouTube channel.

Another highlight of the night was the performance of comic Kailee Karr, who won over the audience with her witty observations on the ways she’s changed since moving to Kansas City. She scored big laughs when she Facetimed her mom on stage to share her mother’s live reaction to Kailee’s new severely short haircut. With a wicked wit, an innocent face, and an undercurrent of rebellious risk-taker, Karr’s is someone to watch in coming years.

Tristan Newell is also a must-see power performer who had the crowd howling over his development of a “circumference” during COVID, his unfiltered thoughts on the musical “Hamilton,” and his tendency to date a particular brand of woman.

Newell revealed a natural talent for engaging the audience physically as well as verbally, as his energetic edge was as palpable as it was powerful. His jokes felt distinctly 3D: heard, seen, and amped by the raw comic energy vividly coursing through his veins. Newell’s stage presence, like someone born doing stand-up, made him a crowd-pleaser.

Show opener Dayton Bissett possessed a disarming charm that accentuated his low-key, irreverent style. His hysterical, short guitar solo to close out his set successfully kicked the crowd into comedic gear and paved the way to a receptive audience for those who followed.

From beginning to end, the Barrel of the Bottoms comedy show was an impressively high-quality comedic experience in one of the most welcoming and fun environments in the Kansas City arts scene.

A BOTB comedy show should be on the must-see list of every aficionado of all things funny. Check out upcoming shows and find additional details regarding studio spaces available for Kansas City performance artists via their Facebook page, Instagram, and website.

Barrel of the Bottoms requires proof of vaccination for entry to all shows.