Bare at the Unicorn and The Witches at the Coterie: See ’em both in all their glory. 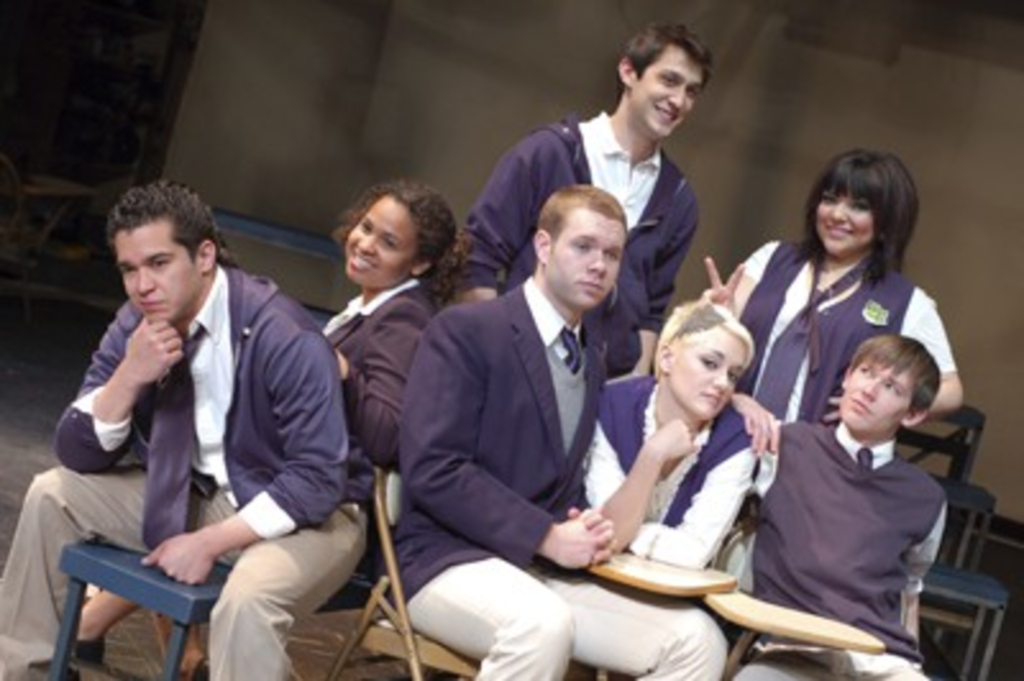 Bare, the potent new musical at the Unicorn, tells a familiar story — Catholic-school boys struggling with their sexuality — in a familiar form. What’s surprising about it isn’t the turns of its plot or the way, by the end, a tickle of feeling, inspired by the first act, becomes a cascade. It’s that a musical so doggedly conventional can capture the messiness of real life.

Yes, Bare boasts gay themes and a rock band, but in a structure that’s been in place since Li’l Abner. It opens with a group number establishing the milieu (the Catholic high school). Then come tunes sketching each character’s motivations, then some comic relief, then a from-nowhere showstopper just when we’re flagging three-quarters of the way through the first act. Just before intermission, it hits us with layered reprises restating the conflicts.

I’m not carping. What works is what works.

Having stuck to the fundamentals, book-and-music team John Hartmere and Damon Intrabartolo get with the business of life. Their finest embellishments concern the worst parts of adolescence. We cringe as a young girl, Nadia, played with biting spirit by Areli Gil, denounces herself as “Plain Jane Fat Ass.” We empathize with two teenagers moping outside a party while the kids they love hook up. Best of all — or, I guess, worst — we catch a young man trying to come out to the mother who should already know. Missy Koonce plays that mom with a tender blitheness. The way she fights off recognizing the obvious, and then fights off that fighting off, is perhaps the most touching thing in a show that draws honest tears.

Director Jeff Church (the Coterie’s artistic director) was born for these moments. Under his care, the pain that these characters try to hide from each other is always clear to us. He understands how teenagers tick between earnestness and cruelty, between languor and hyperactivity. This makes the music — well-sung, well-played, sometimes stirring theater rock — appropriate. For every riff-song, there’s a clutch of ballads.

Church’s young stars grasp their characters’ complexities. We enjoy how Nadia’s caustic outcast lashes the beautiful (and easy) Ivy with cutting one-liners, but we recognize how Ivy — a fully inhabited creation of Katie Karel — is stung by this. In most high-school stories, we’re asked to savor the comeuppance of a popular girl like Ivy. Here, as in the Coterie’s still-running Monday night The Breakfast Club, every type is a person.

That includes Brandon Sollenberger, from whom Church coaxes the miraculous. It’s not “Garbo Talks!” but it is worth proclaiming: Sollenberger rages! Here’s a singer certain in voice but (until now) reserved in onstage bearing, one usually limited to looking chipper and helpful, like he’s musical theater’s tour guide. In Bare he lies, fights and fucks for the cycle. He plays Jason, a golden boy who won’t admit his homosexuality. His Jason exhibits a cool calm, but we see what boils inside him. With Peter (K.C. Comeaux), a theater geek closer to acceptance, Jason shares fleeting passions; with Peter’s mother — the Koonce character — he shares a willful, tortured denial. These moments linger long after the songs have faded from memory.

For every ounce of hurt in Bare, Koonce (who is having quite a month) spoons out a corresponding ounce of joy in The Witches, a macabre lark based on Roald Dahl’s book. Come for a delicious Ron Megee as the Grand High Witch of all the world, dragged up like Anjelica Huston in a sore-ridden bald cap, encouraging an audience of kids and parents to chant “Down with children! Do them in!” Then enjoy the inventive shadow play, the silly chase scenes, the cracked comedy voices of the marvelous Lauretta Pope, the bursts of storybook horror: oozing fingers and kids turned into mice.

Director Koonce attacks Dahl’s story with the audaciousness of a child but not with childishness itself. She makes it more than a dark goof. At times, I tasted trace elements of the fear that shook me when I first suspected adults couldn’t always protect me. Then, after a climax that satisfies even as it refuses to be wholeheartedly happy, she presents a tender moral without any of the irony that has often been her mode. It’s a moral that could apply to Bare as well, more demonstration of the kinship between the so-called kids theater and the uncompromising Unicorn.

Yes, the Coterie is a theater for young folks, and its shows are mostly performed during the workday, but that doesn’t mean grown-ups need to be denied the fun of hearing Megee and Pope witch-cackle about the stinkiness of children. The Coterie offers 2 p.m. matinees on Saturdays and Sundays as well as a 7 p.m. show on Fridays. Bring a kid, if you must.