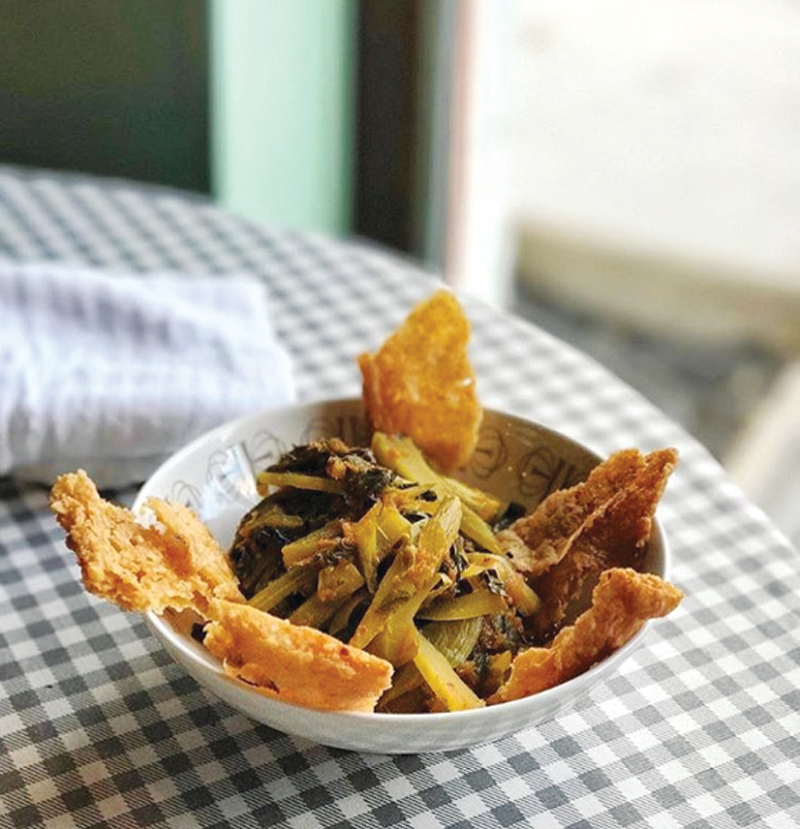 First, the menu: As of March 1, it has largely changed and expanded for spring, incorporating new and bolder flavors — a welcome update of a debut array of dishes that felt less coherent and relatively muted in its flavors. A new small-plate offering, for example, is a savory dish of humble Burmese curried greens; it doesn’t sound like much, but the greens are stewed in a thick, bold (though not spicy) red curry, served with airy and lightly salted crispy chickpea chips. Equally tempting: charcoal-grilled pork skewers with panzanella and peanut sauce, and naem, a Thai sausage that here is served with pickled cabbage.

Polaco has also added a dash of the familiar to his entrée section, including a savory shrimp pad Thai — perhaps for customers who might be wary of Polaco’s authentic (and therefore locally unfamiliar) regional Thai cuisine. There also are deeply flavorful and impressive new dishes, such as his beef rendang, an Indonesian beef curry served with sambal tempoyak, an accompanying condiment that features chile paste as well as the fruit durian. The latter enjoys a fair reputation for emitting an incredibly foul odor, but in this incarnation it’s sweetly mild, similar to roasted onions. 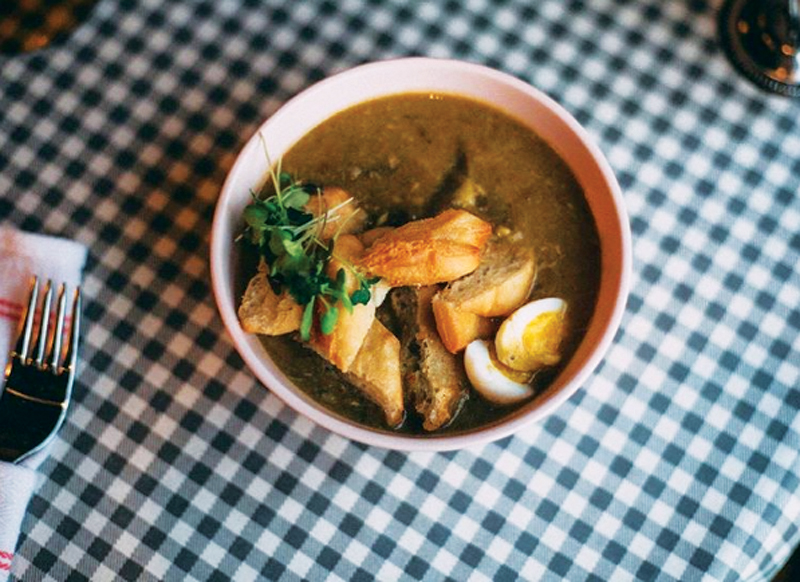 Other additions include a vegan barbecue dish of mushrooms and fingerling potatoes, as well as a Burmese fish stew. Desserts include a simple but tasty mango with sticky rice; a melon dosa (a crispy, rolled-rice wafer) with coconut cream and macadamia; and the “Chinatown Tincture,” a dish of gingko milk served with seasonal fruit and pearl sago. That one, Polaco explains, is a play on a Chinese dish that supposedly contains healing herbs; after the chef sampled the dish in Thailand, he set about re-creating it.

Bar manager Wagner, formerly of SoT and Il Lazzarone, is at work on a cocktail menu for Aep, which she expects will debut in early April. That’s great timing for this location’s rooftop patio, which overlooks 39th Street and is one of the area’s better-kept secrets. Polaco notes that the patio already had great decking and lighting. He’s adding new fencing and furniture to prepare it for duty this spring. Aep is open from 11 a.m. to 10 p.m. daily (closed Sundays).

Down in the West Bottoms, the Golden Ox (1600 Genessee) is at last undergoing its long-planned renovation, following months of permit-related delays, which owner Wes Gartner attributes to KC’s current construction boom and associated backlogs at City Hall. Gartner confirms that he and his partner, Jill Myers, are now tentatively planning a late-spring opening for their steakhouse revival.

This is not their only new project. Gartner and Myers are now in the planning stages for a café and bakery in the lobby of the Stockyards building — the same historic building in which the Ox and Stockyards Brewing Company are located, across the street from Gartner and Myers’ original venture, Voltaire. The two haven’t decided on a name yet, or announced an opening date.

Betty Rae’s Ice Cream (7140 Wornall Road) is open again, just in time for this apocalyptically warm late winter. Owner David Friesen notes that the shop has commenced again with “all the favorite flavors from last year [listed at bettyraes.com] and our sundaes, sandwiches and boozy shakes.” You can’t go wrong with the Coffee and Bailey’s: two shots of that liqueur, blended with Thou Mayest Coffee ice cream and served in a frosty glass.

Pretzel fans, look toward Overland Park: St. Louis–based Pretzel Boy’s has franchised its first area location at 9559 Nall, and it’s set to open next month. The shop does as its name suggests: makes fresh soft pretzels (and pretzel nuggets and pretzel-wrapped sausages). The location is owned by Kansas City local Dan Wikiera, and is the firstPretzel Boy’s outside St. Louis.

The real growing season won’t start for a few more weeks, but you can get going on your herb garden with a free class tonight from 6:30 to 7:30 p.m. at Clinton Parkway Nursery (4900 Clinton Parkway, Lawrence). Learn about techniques and the basics of growing and storage. Refreshments and snacks provided. RSVPs are requested; call 785-842-3081.

Recently nominated for another James Beard Award, Bluestem (900 Westport Road) is celebrating its 13th anniversary tonight with half-price bottles of champagne. We imagine other special treats will be in store as well. Cal 816-561-1101 or see bluestemkc.com to make reservations.

Shrubs — sweetened, vinegar-based syrups — are an authentically American tradition for preserving fruit and juices, dating back to colonial times. Sharp and bright, they work beautifully in cocktails or just mixed with soda water. Learn how to make your own today from 4 to 5 p.m. in a free workshop at Lifted Spirits Distillery (1734 Cherry).

Tannin Wine Bar & Kitchen (1526 Walnut) hosts a wine dinner tonight featuring Andrew Jones, owner of Field Recordings Vineyard and Winery. The dinner is a five-course affair featuring several of Field Recordings’ offerings, from a “Pet-Nat” to Sauvignon Blanc and Tempranillo. The menu is TBA. The dinner, including all wine pairings, is $75 a person, exclusive of tax and gratuity (or $63.75 for Tannin Wine Club members). Call 816-842-2660 or email barryt@tanninwinebar.com for reservations.