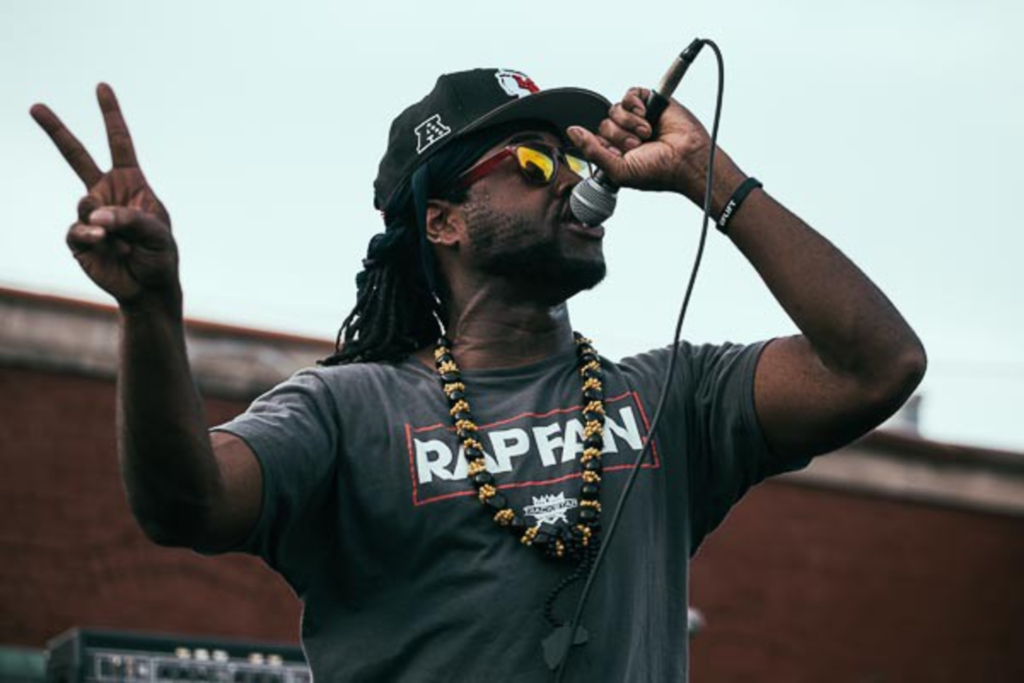 This year, we wanted to focus on capturing Record Store Day around Lawrence and Kansas City. We sent writers to Love Garden Sounds, Mills Record Company and Vinyl Renaissance. If you didn’t make it out, here’s your chance to live vicariously.

Mills Record Company owner Judy Mills described her Record Store Day parking-lot concert as “all my favorite bands playing a show I can’t see,” tethered as she was to the shop, selling stacks of wax to enthusiastic customers. She should be confident that everyone agrees with her superb taste in local acts. If there was one comment I heard over and over again Saturday afternoon, it was that everyone was incredibly appreciative of Mills’ support of local music. 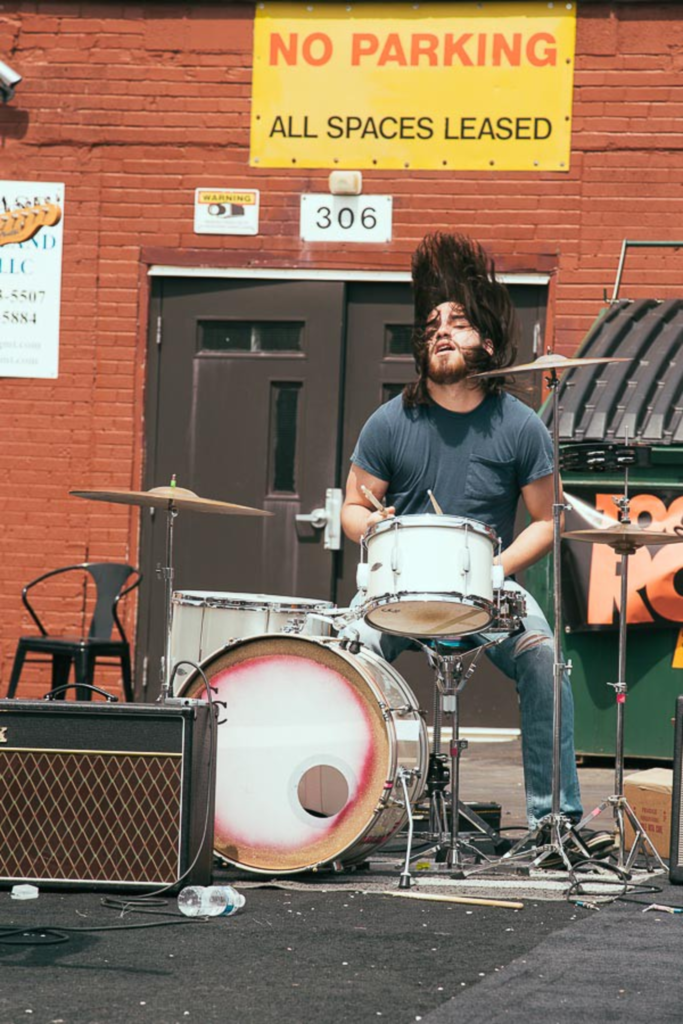 Rev Gusto is the perfect band to play on a sunny spring Saturday – poppy, jangly garage. They played both sides of their new Too Much Rock single, including the very excellent cover of Graham Parker’s “Local Girls.” Sadly, to the first band goes the tiny crowd, as many folks were still crammed into Mills’ confines browsing the bins. The handful of people in front of the PA were appreciative, though.

“For the record, this is the earliest I’ve ever played rock-and-roll music. That includes practices, shows and singing in my car,” said Red Kate’s lead singer L. Ron Drunkard. Red Kate’s rock-and-roll music kicks into gear with a rumble and just goes, man. It felt weird to see them in daylight, to be sure (to say nothing of sober). I dig how the mic gives L. Ron’s voice that badass rockabilly reverb, lending the quartet a really signature vocal sound.

Playing in the afternoon sun, black-leather clad Burial Teen might have seemed out of place, but there’s something refreshing about the idea of dirty, fuzzed-out garage in a completely unlikely place. This band’s a perfect fit for a dank basement, but contrasting everything else in the day – sunshine, happiness, shorts and sandals – just brought the music even more starkly into relief.

The Bad Ideas sounded great, but they’re a band that needs something off which to bounce their sound. Outside, in a parking lot, everything sounded rather thin. Don’t get me wrong – they were on-point, knocking out song after song, but their punk-rock lacked something in the outdoor environment. Nobody was rowdily crashing into one another, and the Bad Ideas seem to feed off intimate settings and a slightly anarchic edge.

It seemed the crowd was divided into two portions – fresh-faced record buyers and families catching some local music on a lovely afternoon, and everyone posted on the patio at Dave’s Stagecoach (where the only shade and beer to be had could be found). On the Stagecoach patio, the record buyers were less in evidence. Quite a few folks were in attendance just for the opportunity to catch their favorite local acts play for free and get a good day drunk going – not a bad plan, really.

Bummer is a group of Olathe kids just out of high school, playing what I’m tempted to describe as stoner metal, or maybe doomy hardcore. Somebody wandering past me described them as “basically Helmet” to their companion, and while that statement is kind of accurate, Bummer isn’t exactly tonally parallel to Paige Hamilton and company. They’re a lot more sludgy, and don’t really rock the whole motorik beat. Definitely a full-on declamatory vocal approach, though, with a tight, big sound. The Bummer crowd was the biggest of the day thus far, and I was duly impressed.

Chatting on the patio with a couple of people, we realized that what really influenced the Bummer kids was likely Nirvana’s Bleach, and morosely considered the fact that it was essentially the current generation’s version of Led Zeppelin. A few quiet sips of beer were required to tamp down the panicky notion that the music of one’s youth is now the new classic rock. 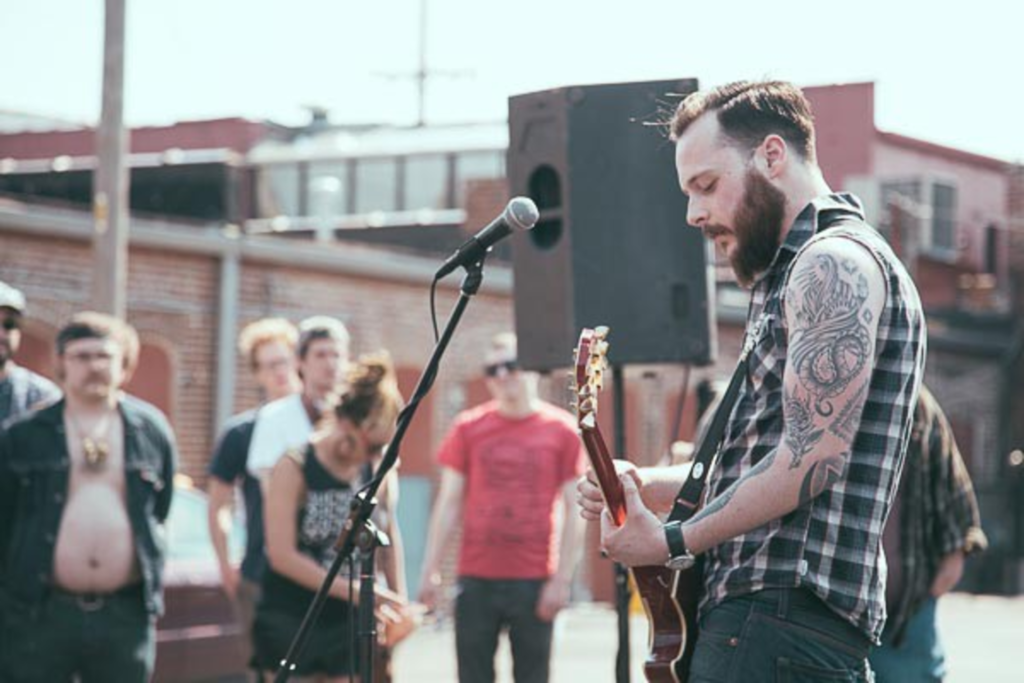 Up next was Keef Mountain, a band that is pure, unabashed stoner rock. Lots of reverb, sludgy riffs, and exactly suited to the level of day-drunk on which I was working. When you start to lose track of the number of PBR tallboys you’ve consumed, bands start to become either “Holy fuck!” or “Really?” And Keef Mountain’s Sabbath-y jams were strongly in the “Shit yeah!” camp.

Speaking of beers, it was at this point that I took a break for dinner, catching only the first song of Expo ’70, whom I’d been wanting to see for ages, but collapsing with low blood sugar wasn’t quite worth it. After scarfing an absurdly large burger, I headed back and poked around inside Mills. Even after the shop had been open for almost 11 hours, the bins were being raided by a good 20-30 people, who were still finding gems and squealing with joy and happiness.

Popping back behind the shop, I just caught the tag end of Lazy’s set. Their garage was shambolic and fun, and their ramshackle rock and roll was just what I needed to perk me up as I started to lag.

The Caves’ set was, as to be expected, laid-back and sedate, but it almost seemed as if it were over as soon as it started. The band’s sound was a bit more forthright and rocking than usual, but otherwise went by without really grabbing my attention.

The ACBs played “super-quiet, so you can come up close.” Hell, if you weren’t up by the PA, the sound of the food trucks’ generators would’ve overpowered the band’s quietly pop-rock sound. Their songs are always rather sedate and introspective, but this particular set really lent itself to paying attention and listening. Every show the band does reminds me of just how damned pretty their music is, and having to crowd in close gave the ACBs an intimate vibe I’d never experienced.

Les Izmore’s Heartfelt Anarchy was both banging and minimalist, with crazy weird beats, obscure lyrics and angular switches in time signatures gave the crowd something to which they could move their collective asses, but kept shit weird enough for all the heads in the audience. Izmore’s flow can be smooth and silky or a staccato barrage that cracks like a whip against D/Will’s beats.

After eight hours in a parking lot, I was spent and headed for the car. The crowd had seriously thinned by this point, with the majority of folks who’d been there all day deciding to pack it in and head for food and some cushioned seating. Again, though – at no point did I hear a single gripe. Everyone was super-positive and excited to see so many good bands, drink some beer, and dig through stacks of records. Based on the sheer overwhelming positivity, I think we can safely assume this will happen again next year.