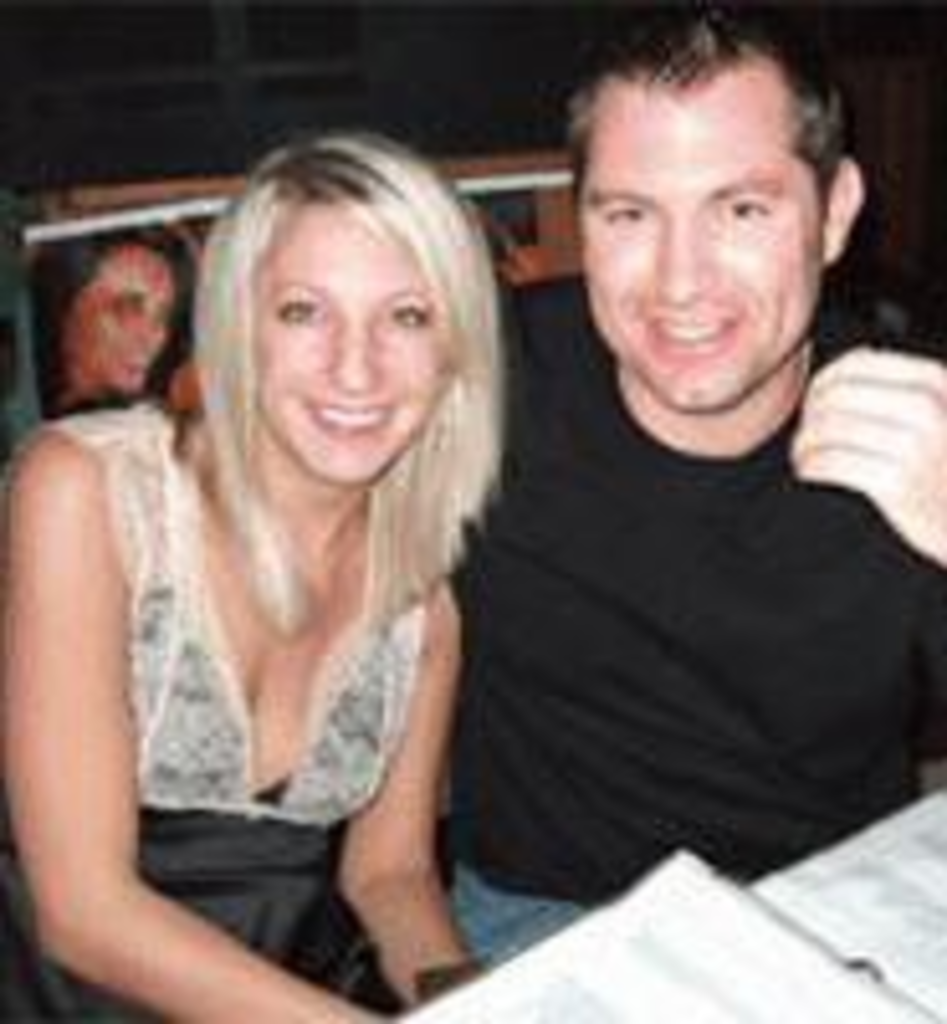 We went to the Red Balloon on a recent Friday night for the legendary karaoke, but we stayed for Mammary-Fest ’06. Research Assistant Tracey observed: “I can’t help but notice that many of the women at this bar have enormous breasts.” One example of this, on a bar stool near us, wore a boob-baring top and black pants. As a guy belted out Pearl Jam’s “Better Man,” we happened to glance over and see her do a quick crotch-tap motion, then a light cleavage stroke.

Ah, karaoke, you never let us down as a people-watching nirvana.

It had been three years since we’d been to el Balloon, that divey Shawnee roadhouse in a strip mall on 75th Street near Interstate 35. On that cold, fall day the last time we were there, we were still hung over from the previous night, which prevented us from drinking. The smokiness of the bar, the ear-splitting volume and the karaoke DJ’s jackass favoritism toward the regulars made for a less-than-stellar night. That experience also impressed upon us an important karaoke maxim: The night’s fun is directly proportional to the amount of alcohol consumed.

We kept this in mind when we went back with RA Tracey. We loaded up on $3.25 vodka cranberries (made with the house vodka) and $3 Miller Lite bottles. The special was $1 tooter shots, which turned out to be preprocessed fruit-flavored concoctions served in test tubes. We declined the shots. We avoid drinks that come in lab equipment, include the word toot or rhyme with pooter.

Drink matters settled, we claimed a table and started quaffing. The wood-paneled, medium-sized place was still the same, smokiness and decibel-level-wise. Behind the bar was a hot-dog roller, on which a couple of preternaturally red wieners turned away, as well as a wooden plaque with looping cursive letters burned into it that read “Red Balloon kicks ass.” Next to the bar was a small, raised stage with a metal rail, illuminated by weak fluorescent lights. Right in front of the stage was what we imagined was a VIP table, flanked by metal folding chairs. A fairly lit group clutching giant glass mugs occupied that prime spot, beerily cheering on the performances, which consisted mainly of KCFX 101.1’s playlist and metal — sung earnestly and without irony.

We were quickly entranced. After our multiple mammary observations, we spotted a Steve Perry doppelgänger, only with a mustache. We desperately hoped that he was going to sing “Oh Sherrie.” Seeing him wailing the great a cappella You should have been gone intro would have made our night. But either we left before his performance, or he, too, was there only as a spectator.

Our attention was soon diverted to a tall guy in a button-down shirt who came over to meet Tracey. Yammy said he wanted to meet her after spotting her Kansas City Roller Warriors track jacket when we first walked in. (Note to self: It’s badass to have a roller derby research assistant.) Yammy started playing pool and came over between shots to chat her up. We thought it was pretty ballsy for a guy at a loud karaoke bar to approach two women who were obviously deep in conversation and giving off “keep away” signals. We asked him why he cut across the bar to come meet us.

“Why not?” Yammy said, screwing up his face quizzically. “You look like attractive people who’d talk.” Oh, flattery will get you everywhere. We let him off the hook, and this 36-year-old Balloon regular told us that he was there every Friday, and the atmosphere changes each time. Sometimes, a couple of older guys sing, and they’re so drunk that you can’t understand them. “Everyone loves them. It’s a privilege to hear them up there,” he said before going up to perform Black Sabbath’s “War Pigs.” While he was singing, his buddy — a man in a “Vote for Pedro” shirt — sat on the stage stairs and provided some backup vocals.

Yammy’s persistent pursuit of Tracey soon got to be too much, though — especially his compliments about her “great ass.” So we fled our table on the excuse that we had to go interview people. Our next targets were two women who we thought were making out. They were practically sitting on each other’s laps at a big table in the back, and both were pre-Halloweening it in costumes. Fran, a pretty 25-year-old, was dressed as an Army recruiter; her equally hot buddy, 28-year-old Autumn, was her recruit. Both are friends from Cleveland Chiropractic College, and they went with the Army theme because Autumn’s husband, Rhett, is in the armed forces. They all live nearby, yet this was only their third visit. Their absence was caused by an incident that occurred just a couple of months ago. According to the ladies, some regulars were pissed that they were there, and one commented, “If someone is fucking her, I’m leaving.” In the sober light of day, we’re not exactly sure if we wrote that down correctly, but the main gist of their story was that they felt unloved. However, Autumn didn’t let that get her down. “Honey, we beat people here by 15 years,” she said, dismissively.

Make that almost everyone. Exceptions included 25-year-old Stacy and her fiancé, 32-year-old Craig, who were at the table next to us. They, too, had asked Tracey about her jacket earlier in the night, so we doubled back to talk to them further. We’re suckers for how-we-met stories, and they had a good one. They told us that Craig approached Stacy at the Red Balloon with the pickup line “Hey, can I buy you a drink, or do you just want money?”

As we walked out, something bizarre happened. A guy ran past us to his car, laughing, while a shorter woman hollered out the door, “Motherfucker! That hurt! Marcus, I think you broke my nose! And spilled my drink!”

Get these people some roller derby gear!

The Big Rip Brewing Co. is hosting a Snake Bar pop-up throughout March