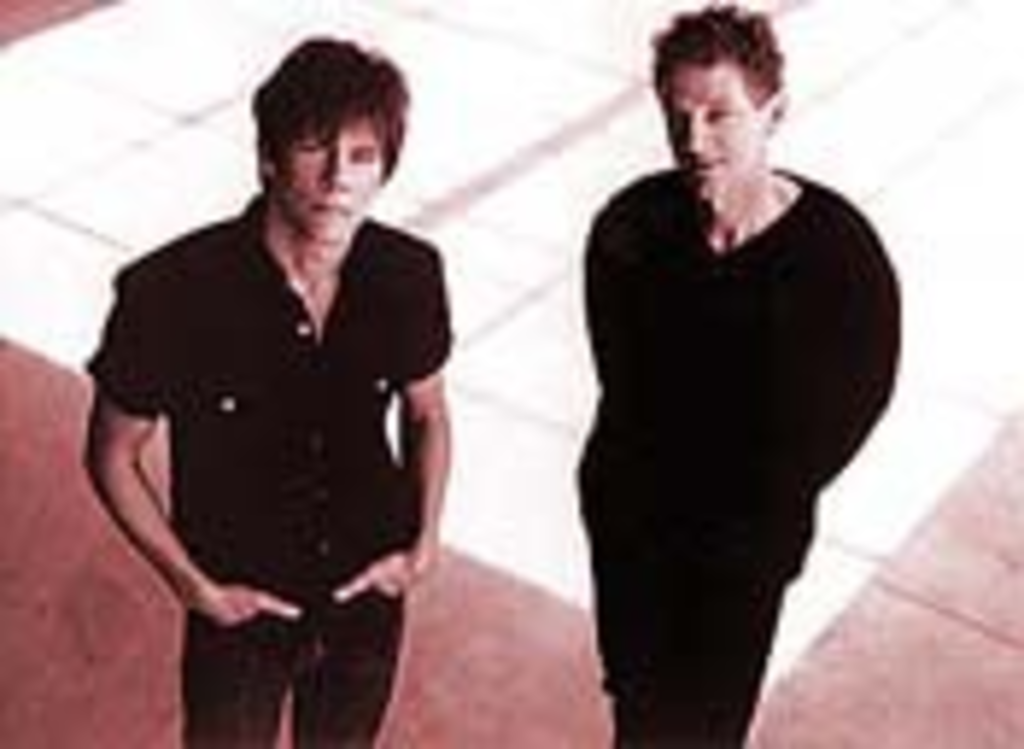 Even those who possess only a casual grasp on pop culture are familiar with the Six Degrees of Kevin Bacon game. The notion is that the star has appeared in so many films that any actor/actress can be linked to him through a common movie in under six steps. Usually no more than three or four steps are necessary.

But if Kevin Bacon and his older brother Michael Bacon have it their way, a new game may be on the horizon which connects the pair to musical artists. Carlos Santana can be done in four steps. Prince in two. Jon Bon Jovi in one. Call it Six Degrees of The Bacon Brothers.

“Most people in their heart of hearts believe that playing music is hard,” Kevin says, from a cell phone while walking around Manhattan. “I don’t think there’s too many people out there who look up at Bruce Springsteen and go, ‘Hey, anybody could do that. To write songs, and get up and sing and play guitar, that looks pretty easy.’ But most people believe that acting is a breeze — that any asshole with a pretty face can be an actor.

“When you put those two concepts together, there’s a very easy acceptance factor to a singer going in and doing a movie,” he explains. “No one said, ‘Dwight Yoakam is out of his mind,’ or Harry Connick Jr., or Phil Collins, or Jewel. But when you see an actor pick up a guitar and sing a song, it’s kind of like, ‘Oh, there’s no way this guy is going to be able to do that.'”

While that may be the perception with actors-turned-musicians, it in no way applies to brother Michael, who has carved out an impressive career on his own. An Emmy-winning composer for his work on 1993’s The Kennedy’s, Michael has always been immersed in the recording industry. Although for him, it’s more preferable when it’s a family thing.

“I don’t ever remember a time when I didn’t want to play music with my brother,” says Michael, joining the three-way conversation from his New York City home. “Maybe that is just the nature of siblings. I played in a band with one of my sisters. I guess there’s a feeling of connection, there’s a support system that still exists. Now we’re standing in front of 15,000 people, and to look over and see someone you know so intimately, and to share the excitement and the achievement of that, and also the down things like the frustrations, is very comforting.”

Kevin says, “It was a real honor that my older brother would say, ‘Hey, why don’t you pick up that drum and bang along with me?’ You know what it’s like with an older brother, you really look up to them. Just to be included in that is kind of cool.”

With years of noodling around together in garages and basements, the two managed to step up the collaboration for real while well into their adulthood. In 1997, The Bacon Brothers released their debut record Forosoco. The album’s title, which is shorthand for folk, rock, soul, and country, gave a sensible description for the act’s fusing of styles.

It was a little bit of a wise-ass sort of thing,” Michael says of the term “forosoco” (which PitchWeekly‘s editorial computer spell check keeps trying to change into “pharisaic”). “Because when you start a band, the first thing people ask is what kind of music it is. And you don’t want to be categorized, because you’re ‘so original’ and all that stuff. So we made up this kind of goofy term. Sometimes we’ll sit down and think about who really fits in the category. It does describe The Eagles, for instance, because they’re very soulful and have a country slant. But they’re not country, and they’re not soul, and they can rock out. It describes The Band also, who we actually opened for at Carnegie Hall.”

Though the soul part of the abbreviation may be a little dwarfed by the other three styles on The Bacon Brothers’ current offering, Getting There, the album provides a diverse sampling of the band’s abilities. Both brothers share acoustic guitar duties — Michael handles the trickier stuff, as well as the cello — and they alternate lead vocals and harmonies.

“It goes all over the map in terms of the style of music,” says the 50-year-old Michael. “The songs are loosely based on personal experience. I don’t think they’re too much heart-on-the-sleeves-type things. I believe in writing personal songs, but at the same time, songs have to have a universal quality or else people don’t really relate to them. Like if my wife doesn’t put the cap back on the toothpaste, I don’t need to write a song about it.”

With Kevin’s Hollywood connections (he can probably reach anyone in less than six phone calls) it must be tempting for him to invite all manner of celebrities to perform on the duo’s albums or sit in with the band live. “I wouldn’t do it anyway,” Kevin says. “We have sort of a running joke that there always seems to be celebrities on the guest lists of our shows who never show up. My brother will attest to the fact that it’s certainly my work, and I run into a lot of different people, but it’s not my circle, really. I don’t live in Hollywood, and I don’t really spend a lot of time with celebrities.”

“It always seems like a good idea,” Michael says of exploiting the celebrity guest potential. “Then you run into the problem of what if they come in and they’re lousy. We had Jon Bon Jovi play on the first record, and he was fabulous. But what if he weren’t? It’s just kind of a weird position to be put in.”

With his rich voice and confident lyrics, Kevin has made a comfortable transition from big-screen star (he’s made 34 feature films) to big-venue draw (he’s currently on a 28-city tour that concludes in KC). Though he “can’t imagine ever totally switching” to a career in music, Kevin has a rare insight into contrasting the mediums.

“In terms of playing music versus making movies, there’s a lot of differences,” the 41-year-old actor says. “Being on a movie set is a very kind of comfortable place to be. It’s sort of like being in my living room. I’ve done it my whole life. I know the drill. Playing music out live has a certain element of danger and excitement. Adrenaline — anything can happen. You rarely leave a set after 14 hours of shooting and say, ‘Wow, I’m really pumped.’ You’re mostly kind of wiped out. But there’s definitely a rush to playing music.”

“The biggest difference (between making music and movies) is when we play a show, we pretty much write all the music,” Michael explains. “We hire the band. They work for us. We totally control the situation. That’s a nice feeling, where all we have to do in that hour and a half is figure out how to play the best that we can and entertain the audience and ourselves. There’s very few things in life where anybody gets a chance to have that kind of control.”

Though Kevin is the one perceived as having the movie industry connections, it is actually Michael who has a film up for an award at this year’s Oscars. Michael wrote the musical score for King Gimp which is nominated for Best Documentary Short. Two previous films he worked on (The Johnstown Flood and A Time For Justice) have won Academy Awards. Though Michael himself has never been nominated for Original Score, he is in a likely position to someday be a contender. And how aggravating would that be for Kevin if Michael nailed an Oscar nomination before he did?

“I can answer that,” Michael jumps in. “He would be very excited and supportive, and he would love it.”

Kevin says, “It’s a cross I would have to bear.”

The Bacon Brothers Sunday, March 5at The Beaumont Club