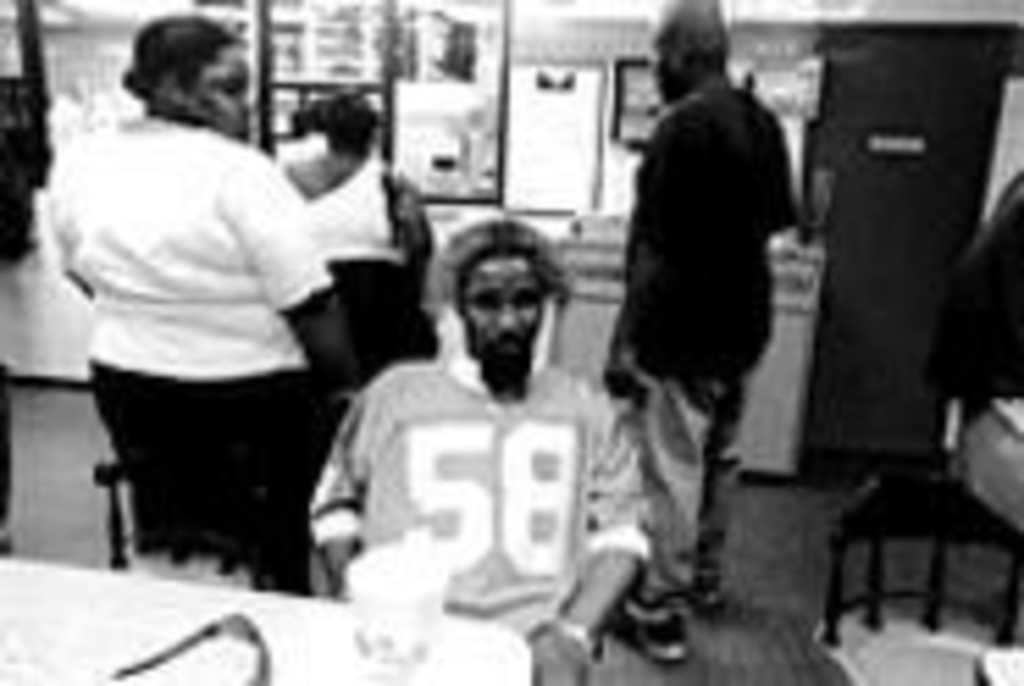 Tech N9ne is hungry, in more ways than one. In a figurative sense, he’s starving for national attention after years as a celebrated regional hip-hop hero. He’s hoping his major-label debut AngHellic (in stores on Tuesday, August 28), which he’s been out all night promoting, will allow him to eat at the big boys’ table, next to the household names from the coasts. But in a literal sense, the Kansas City native born Aaron Dontez Yates just needs a snack. The Ford Expedition Tech’s rolling in, the lead vehicle in a caravan of SUVs and trucks (including one emblazoned with a massive depiction of AngHellic‘s album cover), halts, and when its gold-Dayton-decorated wheels stop spinning, the crew has arrived at Go Chicken Go, a “ghetto-style” fried chicken eatery on 51st and Troost. “I love Go Chicken Go,” Tech shouts over his own music, which is still booming out of the stopped vehicle. “They used to give me free chicken when I didn’t have any money to eat back in the day.”

Those days are gone, and the other diners in the packed joint are aware they’re in the presence of future rap royalty. As soon as Tech walks in, the commotion begins: Kids run up to him and ask for his autograph, old acquaintances wish him well and women slip him their telephone numbers. Tech handles the attention like a seasoned pro, but while he’s used to being a celebrity in these parts, he’s found it difficult to establish himself outside of Kansas City, despite having recorded with 2Pac, Eminem, RZA and KRS-One and having contributed to the Gang Related and Thicker Than Water soundtracks.

“I’ve been cursed,” says Tech, winner of the Klammy in the rap category every year since the award ceremony’s inception. “I’ve always had dope stuff, but no one could ever hear it because I didn’t have the instruments to get my shit to the masses.”

One such instrument is his new street team. Every night, its members pass out promotional materials such as CDs, posters, T-shirts and caps to the prospective hip-hop heads it encounters outside clubs, malls and retail music stores. The crew has already hit twelve other cities, including Atlanta, St. Louis, Houston and Indianapolis.

Tech eats what he can between the constant interruptions, never getting annoyed with his persistent fans. This is the life, he explains, that he’s wanted since middle school.

“I wrote my first rhyme in the seventh grade,” he recalls. “I used to beat-box for William “Txx-Will” Oates (now a member of the 57th Street Rogue Dog Villains). Everyone at school said I couldn’t rhyme, that all I could do was spit [beat box]. So I wrote a rhyme to prove them wrong.”

Tech created a rat-a-tat-tat, tongue-twisting style of flow that has earned frequent comparisons to Bone Thugs-N-Harmony. “I’ve been rappin’ rapid for years,” he says, defending his delivery. “Bone wasn’t even close to being out when I started doing my thing. Nobody rapped like that when I started doing it.”

Even if Bone had been doing its thing when Tech got started, he probably wouldn’t have heard it — rap music was banned in his household. But he fell in love with the genre as a five-year-old when his uncle introduced him to Blowfly’s “Rap Dirty.” His affection for hip-hop turned to obsession when a roller rink DJ turned him on to Afrika Bambaataa’s “Planet Rock” in 1982. “It sounded like scary movie music with that haunting-ass sound,” he says. “That song drove me crazy and stayed in my head forever.” (Tech pays tribute to the pioneering rap number by including his own version, “PR 2K1,” on AngHellic.)

Growing up in the Wayne Minor housing projects on Ninth and Michigan, Tech was exposed to many other musical styles as well. “I can remember hearing Rush, The Police and Elton John,” Tech recalls, listing his uncles’ favorite rock titles. “I also watched a lot of MTV when it first came on and all they played was rock, so I couldn’t help but be influenced by it.”

Tech’s exposure to rock is apparent in his music, which is laced with guitars, but it’s most evident in his stage persona. In concert, Tech flings out his tongue like Gene Simmons of Kiss, clutches the mic with the same angry tension Kurt Cobain used when holding his axe and bounces around with the same manic enthusiasm displayed by Flea of the Red Hot Chili Peppers. Few rappers display much charisma on stage, but it’s Tech’s biggest asset — he’s a natural performer.

His stage show became legendary long ago, when his 1992 appearance at a step show nearly incited a riot after more than 3,000 people rushed the stage. Observers predicted instant stardom, but instead Tech had to endure nine years of what he describes as hellish conditions.

Early in his career, Tech surrounded himself with people who possessed very little real music business experience. At the time, he also had little definite direction. This combination soon proved disastrous.

In 1993 he signed his first contract with Perspective Records, a label run by Janet Jackson’s hitmakers Jimmy Jam and Terry Lewis. Though they had an impeccable R&B resume, Jam and Lewis had no hip-hop track record, and they struggled in their maiden voyage. Tech’s debut disc on Perspective was never released. “That album is buried deep in a vault somewhere,” Tech says without remorse. “I hope it never resurfaces because it’s terrible. It was dated when we recorded it back in ’93.”

Once the Perspective deal collapsed, Tech fell into an emotional tailspin. When he emerged after a brief period of seclusion, a new persona was born. “My shit got dark and I released my frustration through a new hardcore rap group we formed called NNUTT HOWZE,” Tech says. “I started painting my face and got sick with my music.”

The NNUTT HOWZE project fizzled, but Tech struck a solo deal in 1997 with Qwest Records, a subsidiary of Warner Bros. He recorded with producer QD3, who had worked with 2Pac. QD3, whose father is Quincy Jones, produced fourteen tracks, including “Twisted,” the last song Zapp’s late frontman Roger Troutman ever recorded. The song now appears on AngHellic; the album on which it was originally featured, Be Warned, never saw the light of day. (Tech recently purchased the master tape, but he has no current plans for the unreleased album.)

To keep himself afloat financially in the late ’90s, Tech released two independent albums, The Calm Before the Storm and The Worst. Using the sales proceeds from these discs, he finished AngHellic and formed Strange Music with current manger Travis O’Guinn. The two shopped the finished disc to a gang of labels including DreamWorks, Interscope and MCA. “They all said yes, but we said no,” says Tech. “We weren’t satisfied with the deals they put on the table.”

Tech decided to roll with JCOR Records, a mid-level label with Interscope backing, so he could receive more attention. “Why be a small fish in a big pond when you can be the big fish in a small pond?” O’Guinn says. “We were in a good position to negotiate the deal we wanted because we had a finished album.”

Still, having a disc in the can for so long can be frustrating to a prolific performer such as Tech, who has amassed more than 300 songs. He’s already started writing for his next project, Absolute Power, and to stay sharp, he’s recording with his lifelong homeboys the 57th Street Rogue Dog Villains on their upcoming album Roguish Ways. He most recently teamed with the group on its massive underground hit “Let’s Get Fucked Up” from the independent release It’s On Now.

“A lot of people don’t think I can do that hard street shit,” Tech claims. “That’s one of the main reasons I recorded with the Rogue Dogs. Personally, I’m more into the futuristic Battlestar Galactica shit. A lot of people think I’m weird and demonic, but it’s all about the music and what it makes me do.”

Tech’s running late for his studio meeting with the Dogs, partially because of his glowing reception at Go Chicken Go. He strolls into the studio carrying a yellow legal pad with verses scribbled all over the pages, grabs a Bud Light and heads straight for the recording booth. As he teams with Rogue Dog Michael “Bakarii” Whitebear on the chorus for a song called “We Came to Party Part 2,” a different side of Tech emerges. Feeling the club-ready beat laid by local producer Kevin “Kev” Ford, Tech flows: Hit the party and make it bounce for you/Turn up the speaker/Get to drinkin’/Roll a pound with you/Turn it up goddammit this shit is slammin’/Let me see you dance.

There’s nothing this upbeat on the relentlessly morbid AngHellic, but Tech claims that disc is more true to himself than anything else he has recorded. Explaining his versatility, Tech claims, “I can do it all. I have three different personalities — a good side, a bad side and a confused side — and each one has a lot to say. So hopefully that means I’ll be around for a while.”

As evidenced by the “hopefully” in his above quote, Tech isn’t so cocky that he doesn’t have his doubts. Still, after all he’s experienced, he’s not afraid. “I’m nervous, but I’ve experienced a lot of rejection so I have no reason to fear it,” says Tech. “I’ve offered the world my soul on AngHellic. People might say, ‘That nigga is fucked up,’ or ‘I really dig what he’s talking about.’ The bottom line is, I just want people to hear me and feel me.”