Getting a handle on Blade and Timber, the area’s first ax-throwing club 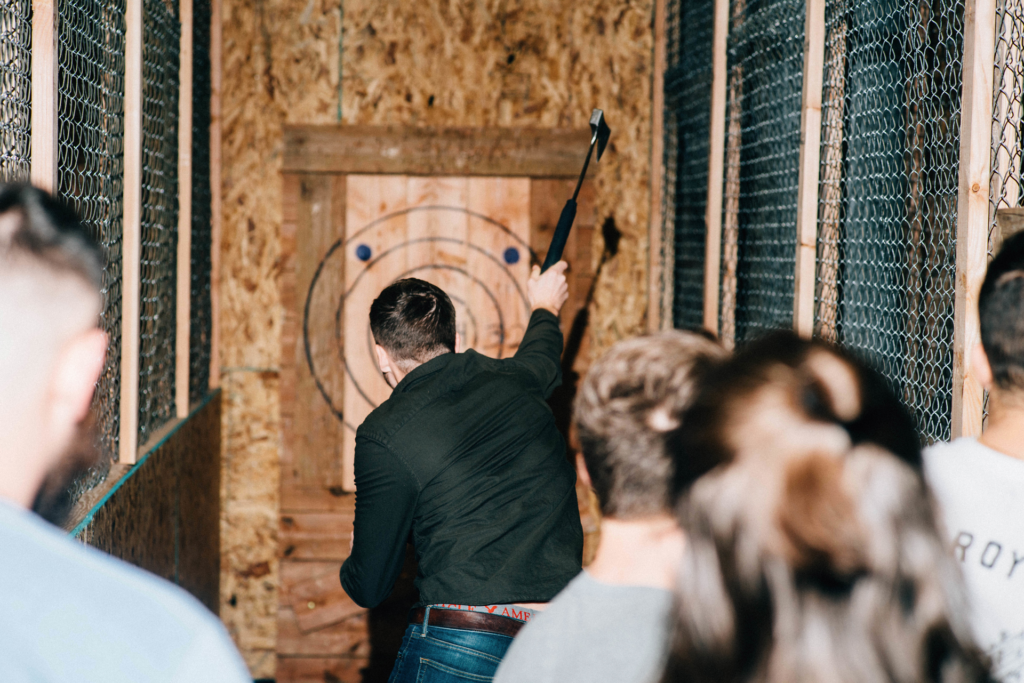 You don’t have to be a Game of Thrones obsessive or a red-state Democrat to grasp an elemental truth: There’s no mood elevator more immediate than picking up an ax with both hands, raising it above your head, taking aim and hurling it with all your might. This is what I discover on the dreary autumn day I drop by Blade and Timber (1101 Mulberry, bladeandtimber.com), Kansas City’s first and only urban ax-throwing club.

I’m greeted at the door — which has shiny, metal axes as handles — by Ryan Henrich, who co-owns the business with Matt Baysinger. Young and almost comically entrepreneurial, Henrich and Baysinger are excellent at spotting entertainment trends that are both novel and enduring. Their excellent escape room, Breakout KC, stands as evidence of their ingenuity.

Bearded and stocky, Henrich presents as someone born to wield an ax. So he looks right at home in the converted West Bottoms warehouse where he and Baysinger have set up shop. Inside the space are six lanes available by reservation, and two that are open to the public. Since the club opened in November, Henrich says, the response has been convincing: More than 1,800 people have so far tested their barbarian skills, and most weekend nights have been completely booked. He says some people have arrived a bit nervous about trying it — a three-and-a-half-pound ax making for, as he puts it, a “decently heavy projectile” — but most soon find their inner Conan.

“My mom is 57 and 5-foot-nothing, and on her first throw, she stuck a bull’s-eye,” he tells me, holding a shiny, silver ax etched with the Blade and Timber logo. “She loved it so much that she kind of hogged the lane for a while.” 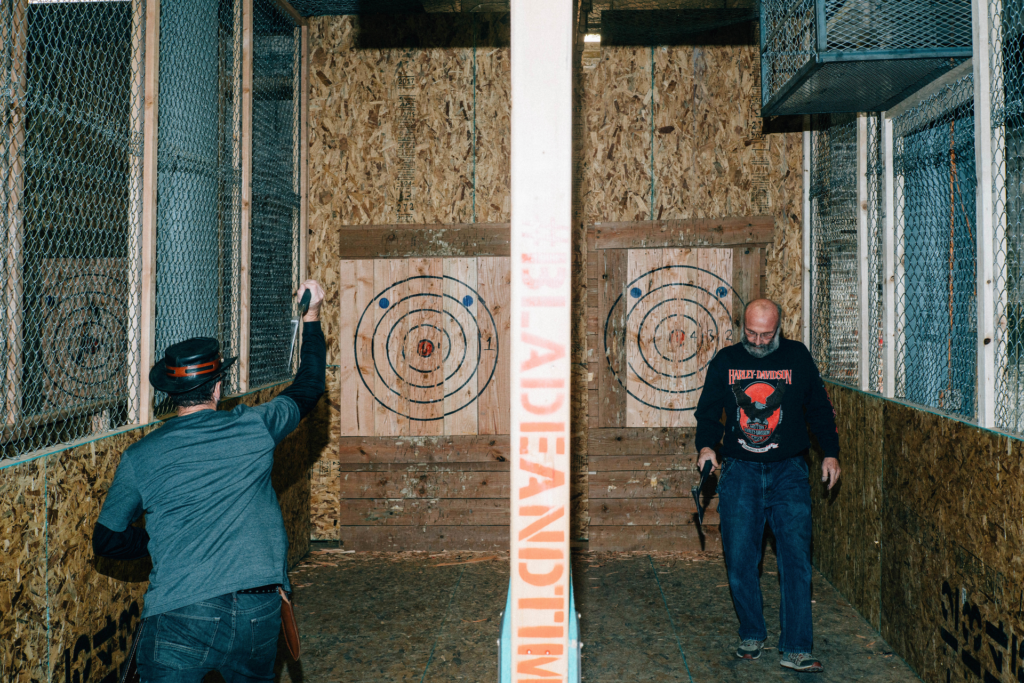 Henrich says that anyone who is tall enough to throw an ax 12 feet can hit the target — including their youngest guest so far, who was only 7 years old. Still, for anyone who doubts her abilities, working with a coach is included with first-time admission. Aside from having a really cool job title, the ax experts guide almost every first-timer to stick a throw within a couple of minutes, Henrich tells me.

“Imagine it slicing through the air,” he instructs me, and I imagine the silver blade he’s holding spinning across the room in slow motion, as though under water. Then he asks me if I’m ready to throw.

I try not to seem overeager, but I’m sure he can tell I’ve been dying to get my hands on an ax since I got here. Still, I summon as much concentration as I can, not wanting to seem haphazard at first throw. I let Henrich show me how to position my hands on the handle, how to take aim. I watch him release his ax, and see it spin smoothly in a single rotation before thudding decisively into the wooden target. (They have to replace targets at least every six hours, he tells me, depending on how spirited the competition in each lane becomes.)

Now it’s my turn. I line my fingers up the way I’ve been taught, and I lift the ax over my head. Yup, this warrior stance is enormously empowering. But even better is the momentum as I bring my arms forward and direct the ax toward the target.

It hits handle first and bounces onto the floor. 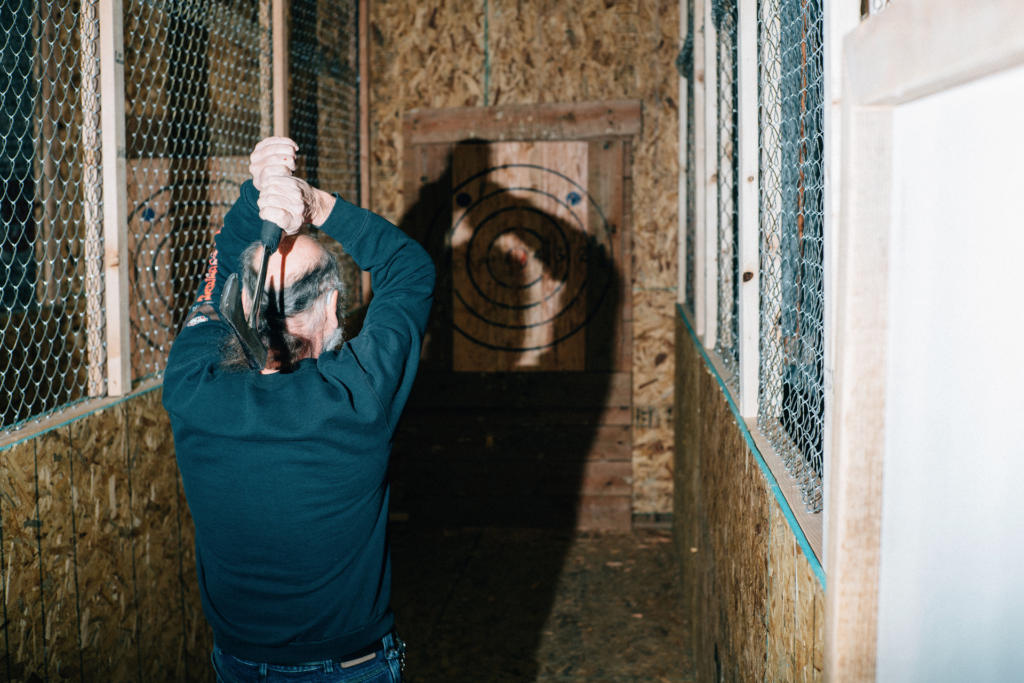 Henrich offers a few pointers: Turn my shoulders this way, step back just a little farther. I ready for the next shot, still myself, get into position … and again watch the ax tumble to the floor.

Step back even farther, Henrich says. I do. Then I aim a third time, and the metal flies, and I nearly nail a bull’s-eye. I stare at it for a second, not quite believing. Then I feel the delight, feel the stress of the morning and my perpetually heavy self-doubt splitting apart like the wood I’ve just cut from 15 feet away. I retrieve the ax, return to my place and begin nailing throw after throw. Now I get why someone might want to rent one of these lanes for three hours. Henrich says that sounds like a long time only until you get started.

“You’re a natural,” he says, as we throw side-by-side in neighboring lanes. 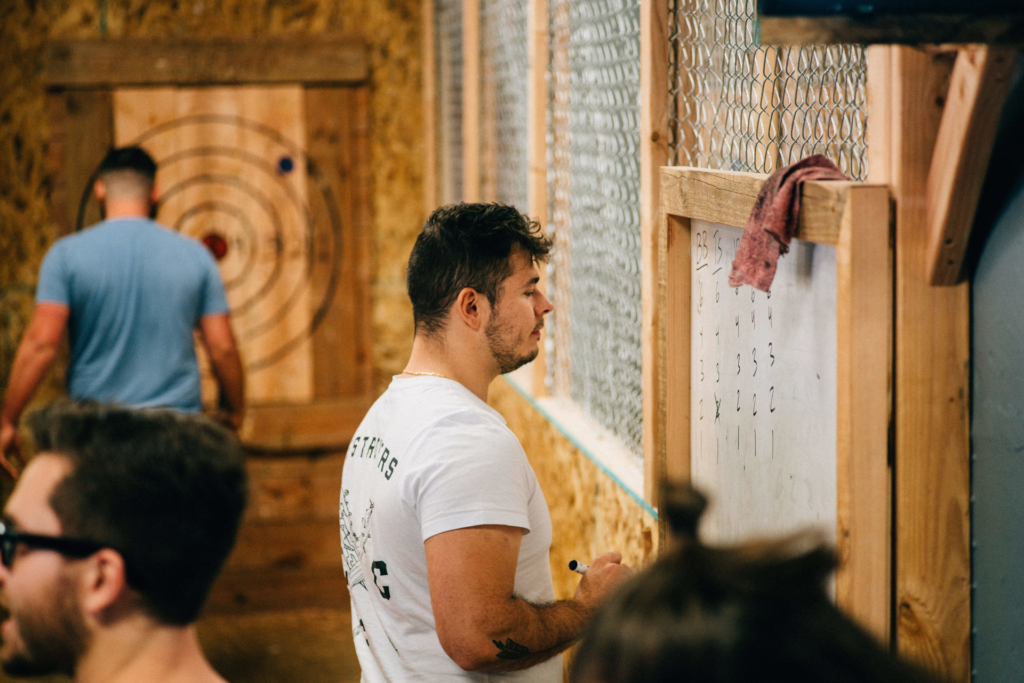 When I ask Henrich what inspired him and Baysinger to open Blade and Timber, he says they wanted to create a place where people could gather — but not a bar or a restaurant. He loves to walk through the space on a busy night and see people talking and laughing, their phones still in their pockets. Food and beer will be available soon. Ultimately he envisions the club providing “high-impact shared experiences with friends and family.”

Yes, Blade and Timber obviously allows just that, and the social appeal is obvious. But here by myself, I feel like a badass — which is at least as satisfying.