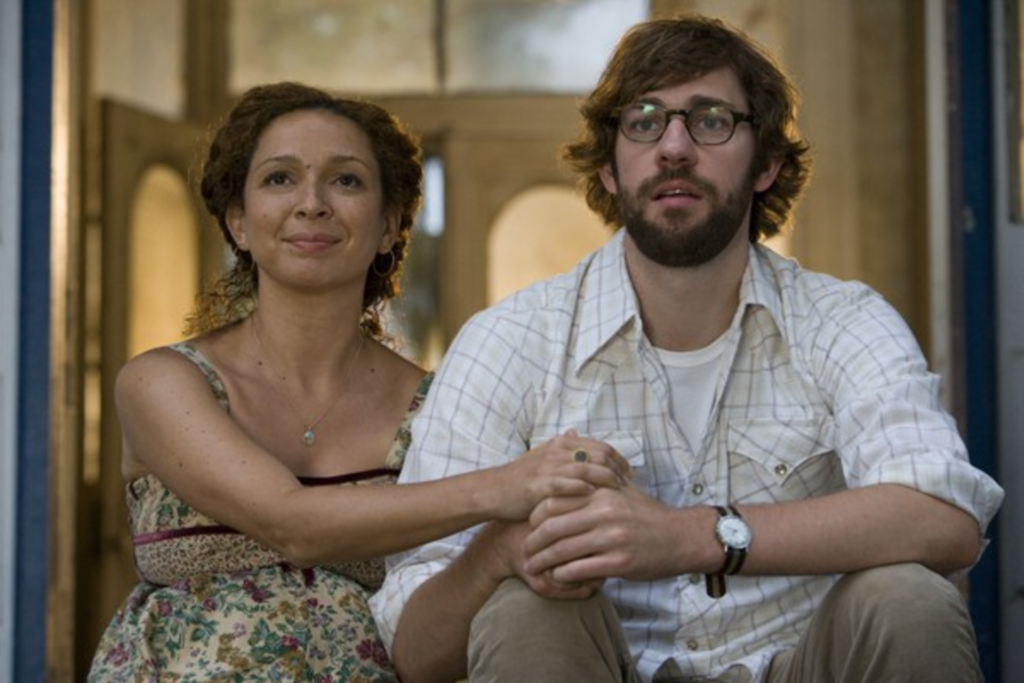 Midway through A Heartbreaking Work of Staggering Genius, author Dave Eggers makes the following observation about his generation of self-obsessed, media-savvy technobrats: “These are people for whom the idea of anonymity is existentially irrational, indefensible,” Eggers writes. “And thus, there is a lot of talking about it all — surely the cultural output of this time will reflect that — there’ll be a lot of talking, whole movies full of talking, talking about talking, ruminating about talking about wondering, about our place, our wants and obligations — the blathering of the belle epoque, you know.” Not surprisingly, in Eggers’ first original screenplay, Away We Go, the characters never shut up.

As a writer, Eggers has an awful lot to say about not very much. In AHWOSG, the talk sometimes ran on for pages at a time in logorrheic monologues.

In Away We Go (co-written by Eggers’ novelist wife, Vendela Vida), the characters similarly hem and haw — about not knowing what they really want to do with their lives and whether, already in their early 30s, that makes them “fuckups.” They wonder if they’ll still love each other when they’re old and fat and ugly. Eventually, they romp around the country visiting friends and relatives who are ostensibly more settled down than they are, vicariously trying their lives on for size.

The black hole that is Eggers’ navel takes the form here of bearded and bedraggled Burt (John Krasinski), a 33-year-old insurance futures salesman. Burt disguises his voice when talking on the phone to clients, to sound how he thinks a grown-up should. Burt’s medical-illustrator girlfriend, Verona (Maya Rudolph), is six months’ pregnant with their first child but doesn’t want to get married. As Away We Go opens, Burt and Verona have put down tenuous roots in Colorado to be close to his parents (Jeff Daniels and Catherine O’Hara). Then the folks announce that they’re moving to Europe, and our young parents-to-be take to the highway, searching for a more meaningful existence.

Thus, away they go to Phoenix for a rendezvous with Verona’s blowsy former colleague (Allison Janney) and her brood of sullen, inarticulate offspring; to Madison, for a reunion with Burt’s childhood friend (an amusing Maggie Gyllenhaal), now an earth mother who disavows strollers and proselytizes the family bed; and to Montreal, where a couple of college classmates (Chris Messina and Melanie Lynskey) have fostered a rainbow coalition of adopted children.

At one point, Messina’s character holds forth with a speech about love and stability, using sugar cubes and maple syrup as visual aids. This may be the movie’s most purely Eggersian moment — overwritten and profoundly banal.

These brief interviews with these parents are perhaps intended by Eggers and Vida as a comic panorama of contemporary child rearing. Mostly, they form a gallery of grotesque family portraits that we can sneer at, knowing that no matter what sort of parents Burt and Verona — and, by implication, the audience — turn out to be, they/we can’t help but be less fucked-up than these freaks.

Away We Go was directed by Sam Mendes during a post-production furlough from Revolutionary Road. The films form a curious diptych — two portraits, separated by a half-century, of young couples trying to find their places in the world. But whereas the Wheelers of Revolutionary Road had grand designs for themselves, the road-trippers of Away We Go harbor no discernible ambitions whatsoever, which renders them fatally uninteresting. For all the ground they cover geographically, dramatically their velocity remains zero.

Mendes, too, seems to have trouble getting onboard with this underachieving set. Yet that very disconnect somehow seems apropos. After all, this is Dave Eggers’ world, and the rest of us are just living in it.