Avenue of the Arts reclaims its Central status 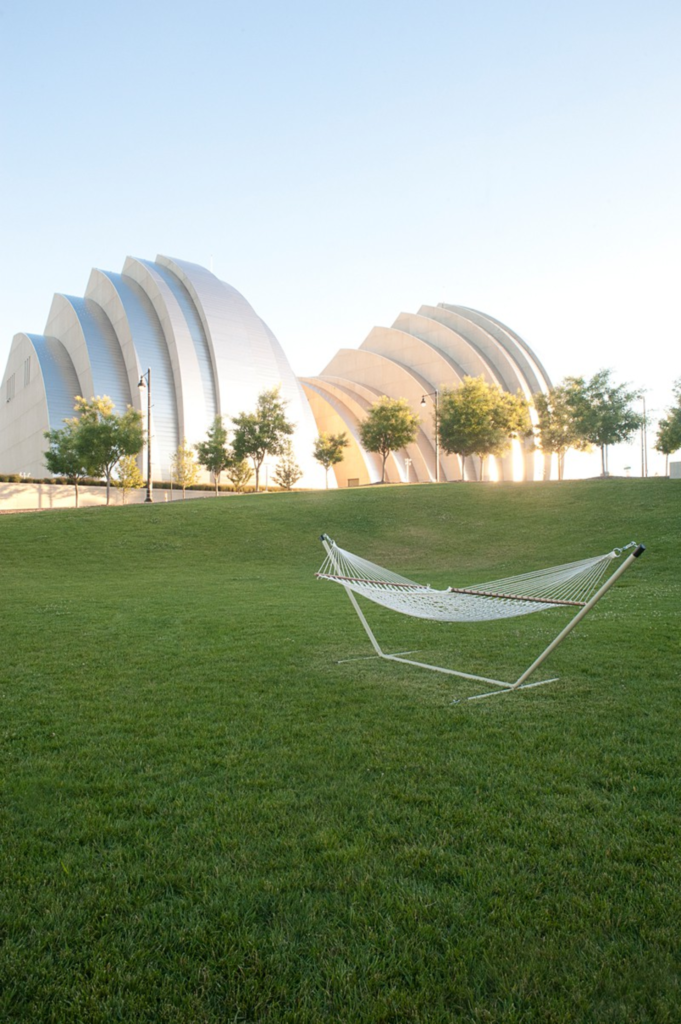 Anyone who’d gotten used to being charmed anew each year by the temporary sculptural installations, curated by the Municipal Art Commission, found nothing new to see in 2010 and 2011. While the Kauffman Center for the Performing Arts was taking shape to the south, and conventions and performances pressed on inside Bartle Hall and the Lyric, the view on the street was plain.

After celebrating its 10th anniversary, in 2009 (with a set of artwork that included a couple of encore works and, for the first time, live performances), the Avenue of the Arts program fell on the same hard times afflicting the rest of the nation. Artists for the next year’s lineup were selected and contacted, then asked to wait. Despite the publicly expressed optimism of Municipal Art Commission director Porter Arneill, many wondered whether the Avenue of the Arts would return at all.

The wait is finally over.

Located as far from coastal waters as any U.S. metro can be, and forever associated with westward expansion and stockyards and railroads, Kansas City can still claim an enviable dedication to the arts. One reason: its “One Percent for Art” policy, which sets aside for public art one penny of every dollar spent on civic-funded construction. Among the other easy-to-take-for-granted public-art partnerships that our city enjoys are Art Through Architecture (Charlotte Street Foundation and AIA-KC), Art in the Loop (a project of the Downtown Council), and the Avenue of the Arts Foundation.

The foundation started in 2000 as Jim Calcara’s response to Hallmark Chairman Donald Hall’s challenge to the business community to find innovative ways to celebrate Kansas City’s sesquicentennial. As principal of the architecture firm CDFM2 (now 360), Calcara recruited Tom McDonnell of DST Systems and the Municipal Art Commission’s director at the time, Blair Sands. The name “Avenue of the Arts” came from an earlier idea from Mark Edelman, the Theater League president, who wanted to promote Central Avenue as a cultural thoroughfare.

Today, 360 and DST make up the core of the Avenue of the Arts Foundation, and 2012’s sponsors include the Economic Development Corporation of Kansas City and, for the first time, the state-funded Missouri Arts Council (whose involvement opened the door to two artists from St. Louis).

The seven artists in this summer’s lineup, whose works span Central from 10th to 16th streets until September 30, were selected, as usual, by a panel of arts professionals and business and community representatives. Part of the goal of the program is to give artists new experience with designing and managing public-art projects. Many of the 60-some Avenue alumni — notably James Woodfill, Jorge García Almodóvar and Matthew Dehaemers — have gone on to use the experience to create larger, permanent public art here and elsewhere.

Because it’s “public art” — that is, art in public spaces, partly funded by public money — it is bound to draw well-worn gripes from the tax-weary. These grumbles in turn invite counterclaims from those of us who like to see intriguing non sequiturs amid mundane sidewalks, visual surprises standing out against traffic-light electric boxes. But at the opening event June 15 — mostly populated by artists, arts-organization employees, their friends and a few City Council members — any critical impulses were drowned out by the sounds of people hailing pedicabs to tour the art and by the happy chatter of spectators enjoying a bright, hot Friday evening. To the south, the Kauffman Center crowned the view as the sun began to set.

This year’s works aren’t as interactive as some in the past — think Dylan Mortimer’s “Prayer Booths” or Brian Zimmerman’s literally face-to-face chat enclosures, “In Parenthesis.” But the collection fits comfortably within the visual scope of the decade-long program while offering viewers some fascinating thematic parallels. Each of the 2012 works in some way touches on the natural world. 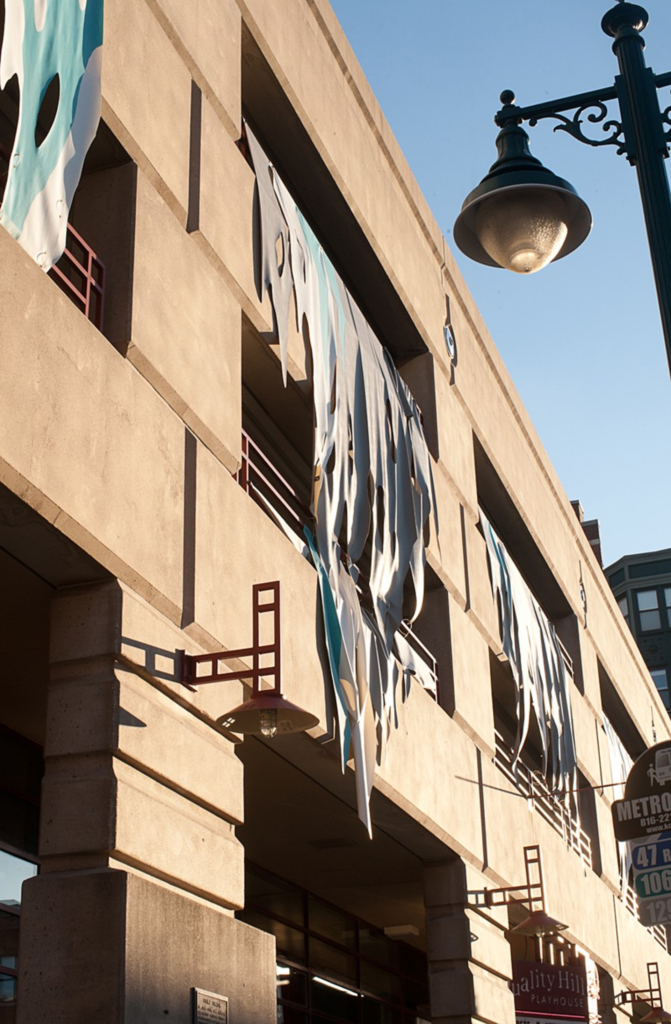 Christa Dalien’s “Ice Storm” hits a memory familiar to Midwesterners: the beauty of the sudden glasslike coating on every plant part, paved surface and building façade that also brings broken branches, downed power lines and car accidents. Her installation, at the northwest corner of Central and 10th Street, takes up one of the more difficult spots for artists involved in the program. At first glance, the white, gray and blue vinyl sheets that hang jaggedly from the roof, anchored with visible zip ties, appear cheap and ugly. But Dalien has wisely used a number of these pieces to evoke the whimsy of ice in summer. As with real ice, the panels perform when their translucency is most apparent, so they’re best when the evening light starts slanting through them. Unlike ice, they ripple a bit and allow the sun to add to their variation. 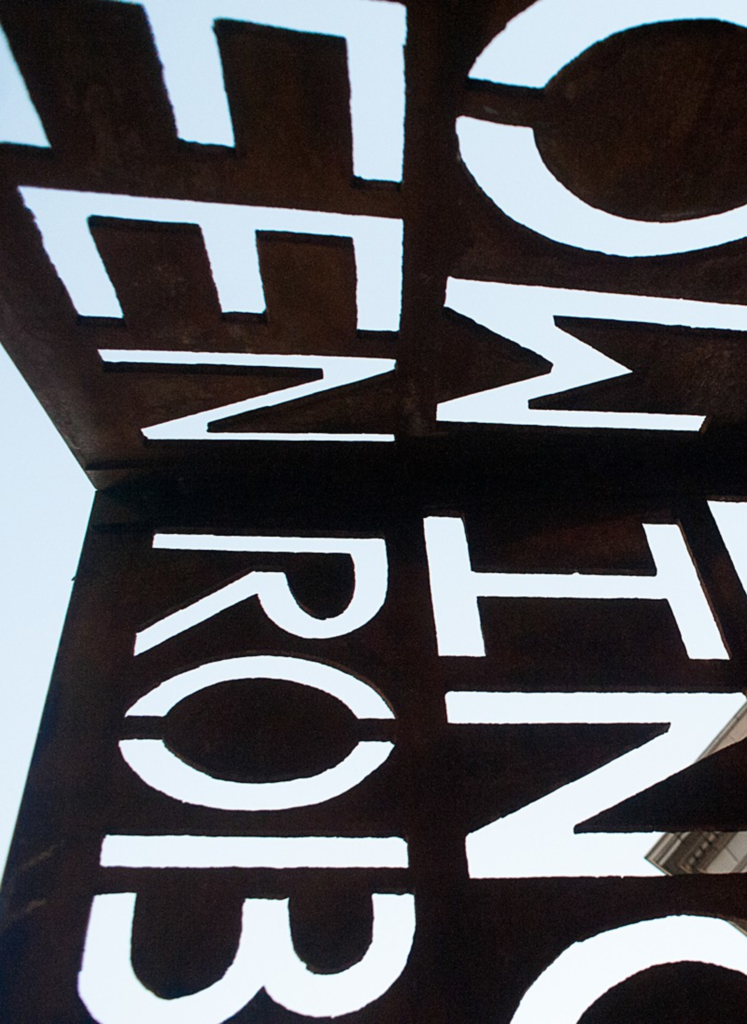 A heavy rusted triangle sits like an anchor on the little corner of lawn at 11th Street, where the Lyric Opera building rests without a tenant. “By Land, By Sea, By Air” is Robert Goetz’s tribute not to Winston Churchill’s 1940 call to arms, as the title suggests, but to the imaginative proclamations of the artist’s 2-year-old daughter. It takes some effort to make out the cutout block letters, but along the sides are three of little Goetz’s utterances: “I am a big yellow bear queen,” “I’m swimming like a robot whale,” “I am flying to you.” The angularity and weight of the sculpture, with pieces that the artist says could be used to make prints, make this seem like a curious medium for conveying the spontaneous expressions of a child. Then you realize that, in her statements, the girl is expressing feelings of power: bearlike strength, a whale’s command of the sea, the capacity for flight. And don’t we all still wish we could fly? 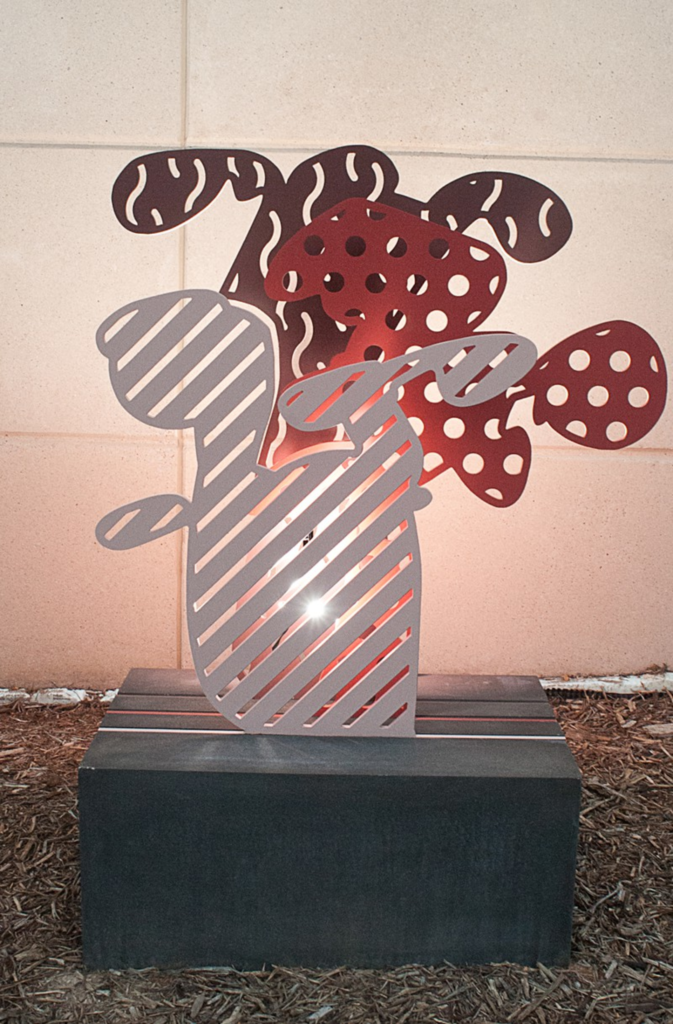 Sue Friesz is well-known for her bubbled, two-dimensional representations of flowers. It’s good to see her moving this aesthetic into a three-dimensional interpretation that finds its place outdoors. Her style shines through — the leaves of “Planta Triformis” are flat and layered in space like paint brought to life — and there is something very satisfying in the way each metal frond is slotted firmly into its concrete base. Her choice of pinks is equally pleasing, and the conversation this piece seems to be having with one of Jun Kaneko’s “Water Plaza” ceramics across the way is another reason to linger here. 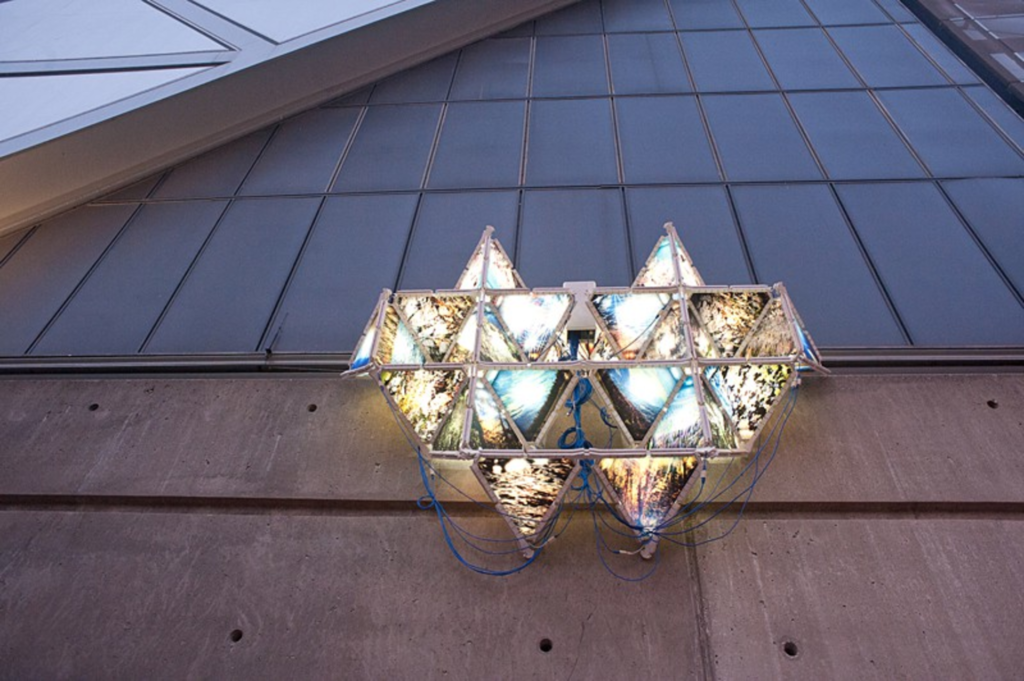 Stewart Losee’s “Non-Traditional Landscape” also uses triangles, and the tetrahedrons together look much like a giant wasp’s nest, daubed high onto the side of Bartle Hall just south of 12th Street. Losee uses a home-built CNC (computer numerical control) router to make these forms, and he has filled the spaces between with postcard-type photo clips that are illuminated at night. In daylight, you can’t miss the clump of exposed blue cables, and the mountains, rivers and forest scenes tend to resemble the kitschy, plastic, back-lit wall decorations popular in 1970s taverns. Looking at the pictures close up to see their details requires you to crane your neck, and even that affords only a protracted view. The easier approach is to stand across the street and let the images blend into abstract color. Viewed that way, the work comes back into scale, dwarfed by its human-made surroundings as a flying insect’s home is proportionate to the world around it. 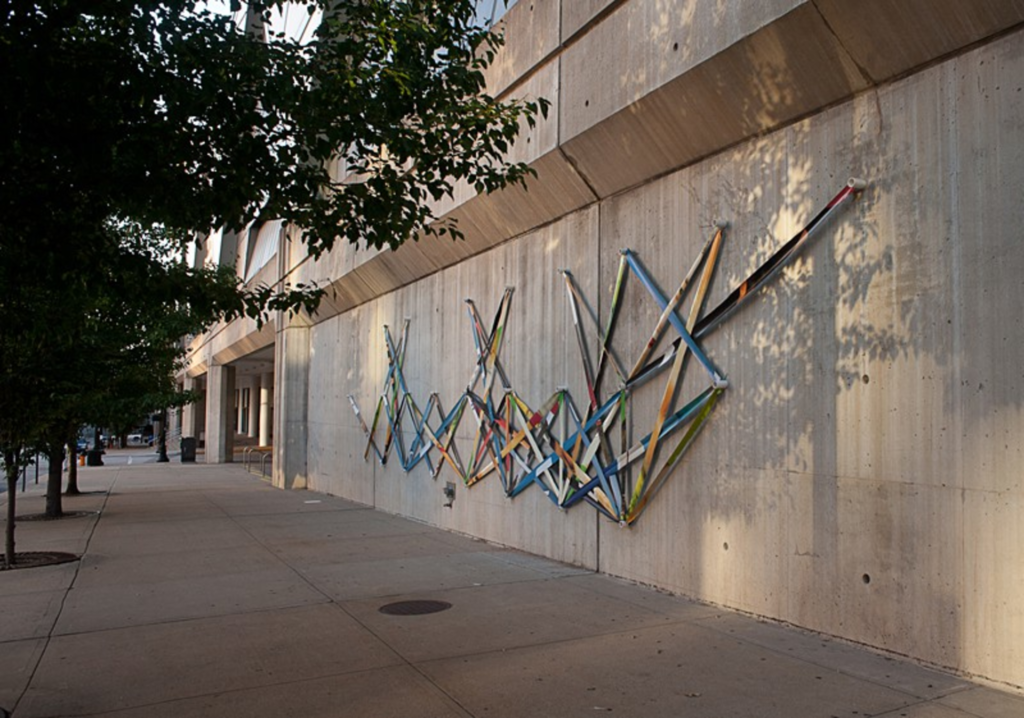 Remember those pin-and-string “paintings” from the 1970s? There’s an echo of them in “Strategies for Dispersion,” in which Gina Alvarez takes on the length of Bartle’s eastern concrete expanse with strips of repurposed billboards arranged in triangles strung between PVC-pipe points. A brochure for this year’s installations explains that her work acts as a form of transportation, from the billboards’ original messages to new moments in thought. That’s a tall order, but it’s nice to have some color running down the otherwise bland wall. Because of parked cars and trees, the best way to experience this work is to walk alongside it. 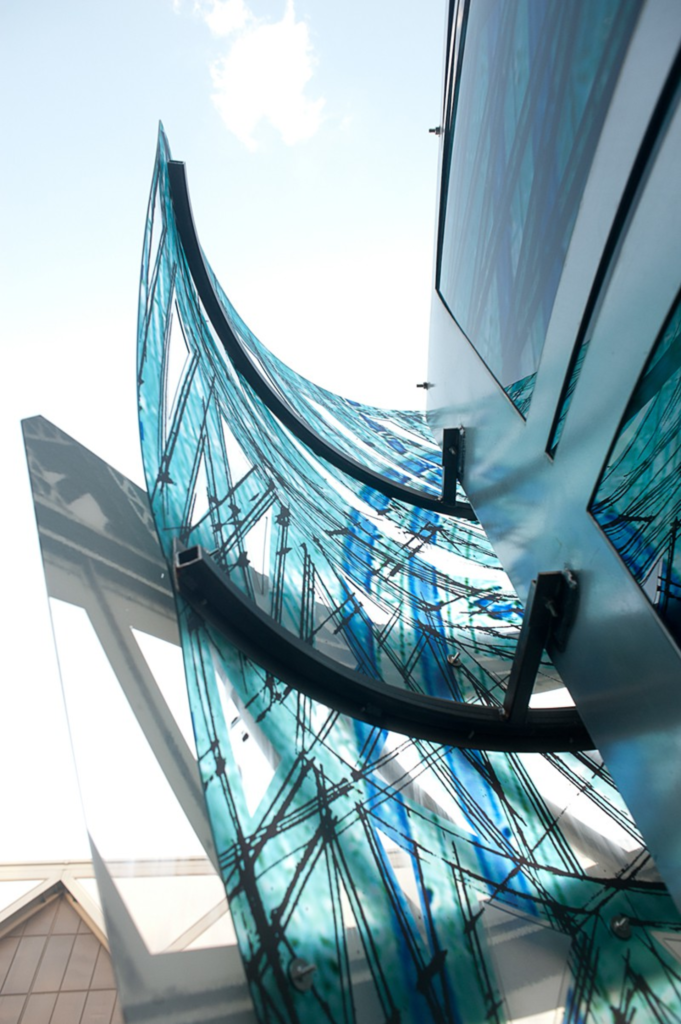 “Blueprint,” by Marilyn Mahoney, is one of the strongest and most engaging works in this year’s set. It’s a transformation of her drawings: angular crisscrosses based on skyline structures like bridge supports, blown up and printed on polycarbonate panels firmly fixed with a subtle, integrated metal framework on a wall of Barney Allis Plaza. Another panel is curved around the front — though some will see in it a mask, the artist explains that she has made a blueprint of a tornado. With that insight, the viewer can find the wind patterns and even stand behind the piece and see through them. A belt of train tracks, taken from a photograph, runs across the curve. Tracks are perhaps something that violent Midwest weather can’t shake, and, of course, people who have witnessed a tornado firsthand all say it sounds like an oncoming freight train. 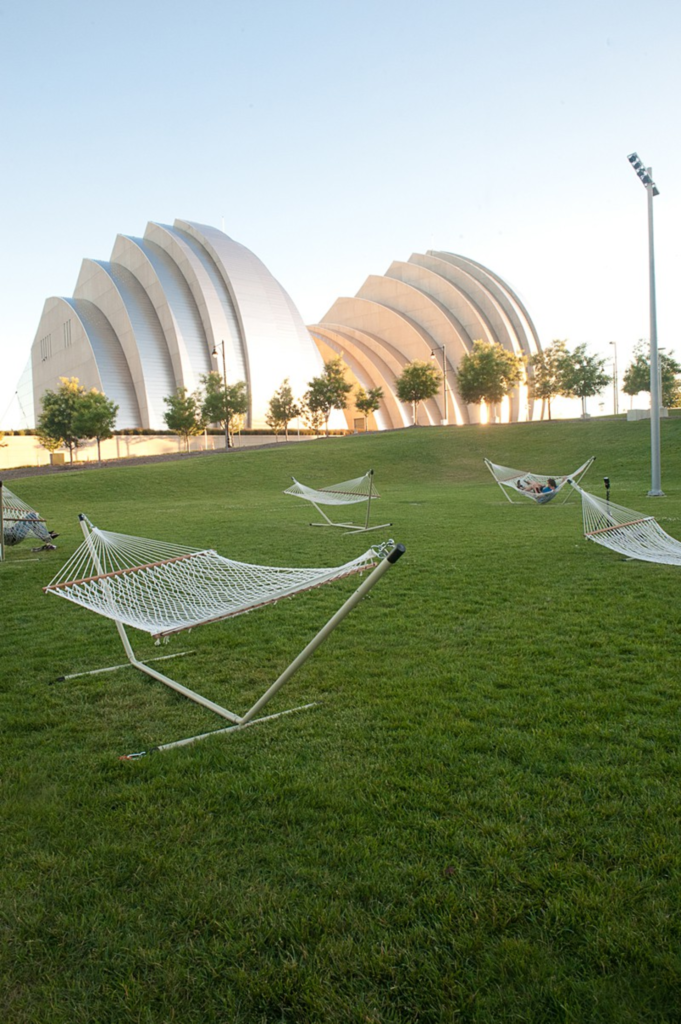 It’s challenging to stay put too long, though, once you’ve caught sight of the incongruous but inviting hammocks on the big lawn south of the Bartle Hall Ballroom. A dozen double-sized hammocks aren’t going to look like art to some people, but among this year’s Avenue pieces, Jarrett Mellenbruch’s “Float” is the only installation that asks to be touched — asks, in fact, for full-body contact. The hammocks are spaced far enough apart that even when all of the others are occupied, you’ll feel alone enough to be comfortable gazing up at the clouds or out at the city’s notable architecture. If art is about experience, then “Float” nails it in the contemplation and community categories.