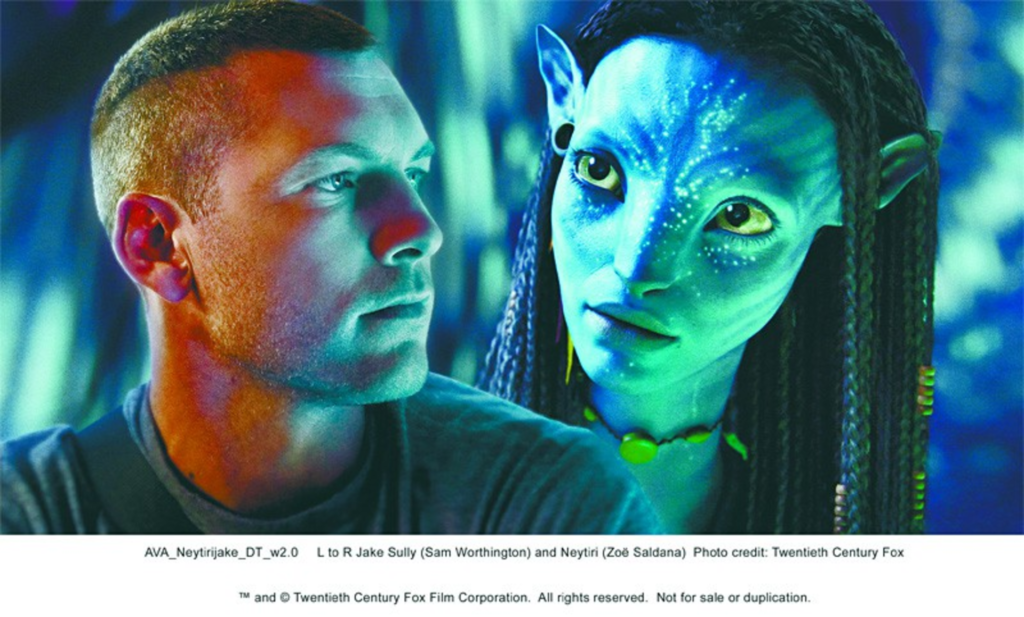 The money is on the screen in Avatar, James Cameron’s mega-3-D, mondo-CGI, more-than-a-quarter-billion-dollar baby. The bling is almost blinding. For the first 45 minutes, I’m thinking Metropolis! and wondering how to amend ballots already cast in polls of the year’s best movies. Then the 3-D wears off, and the long second act kicks in.

Avatar is a technological wonder, 15 years percolating in Cameron’s imagination and inarguably the greatest 3-D cavalry western ever made. The movie opens brilliantly with an assembly line of weightless mercenaries disembarking at planet Pandora’s earthling (that is, American) base — a fantastic military hustle, with the paraplegic volunteer Jake (Australian actor Sam Worthington) wheeling through a sea of Jeeps, trucks and robots. Every shot is a fascinating study, thanks to the plethora of depth-complicated transparent monitors, Kindle-like devices and rearview mirrors that Cameron has positioned throughout the frame.

The Sky People (as the native Pandorans, or Na’vis, call them) are on a mission to mine this lushly verdant planet to save their own despoiled world. As preparation, the Sky People are attempting to infiltrate the Na’vis by linking human consciousness to Pandoran avatars. Thus, an all-American jarhead like Jake finds himself inside a 12-foot-tall, blue-striped, yellow-eyed, flat-nosed humanoid with an elegant tail and cute little goat ears. And, alas, he can walk!

Beside himself with joy, Jake bursts out of the hospital and, before too long, is alone in a mad jungle surrounded by six-armed neon tetra lemurs, flying purple people eaters, hammerheaded triceratops, and nasty leather demon dogs. Jake is saved by the jungle girl Neytiri (Zoe Saldana), known in pidgin English as Pocahontas, and brought back to the Na’vi village to meet her father, the king (full-blooded Cherokee Wes Studi, here playing a good Indian). The Na’vis think that investigating Jake will allow them to understand the Sky People. (Little do they know . . . heh, heh, heh.)

The Sky People are divided into hawks and doves, with Jake as a sort of double double agent, simultaneously reporting back to the most militant Marine meanie (Stephen Lang) as well as the tough but tender biologist (Sigourney Weaver, in full Ripley mode). The former wants him to find out “what the blue monkeys want.” The latter knows that the Na’vi are ultra-green — a New Age matriarchal eco-friendly culture spiritually connected to Every Living Thing. (This capacity is better imagined than demonstrated.)

When, waking up back in the lab, Jake realizes that “out there is the true world and in here is the dream,” you know that it’s time for him to go native, complete with tender blue-monkey sex. The muscular, coming-atcha visuals trump the movie’s camp dialogue and corny conception, but only up to a point. Jake’s initiation rites notwithstanding, Avatar itself doesn’t itself reawaken until the final battle.

Long before the third act, however, the ideologically sensitive will realize that 20th Century Fox has taken a half-billion-dollar risk (counting PR) that perhaps only Rupert Murdoch’s studio could afford to take. The rampaging Sky People are heavily associated with the Bush administration. They chortle over the failure of diplomacy, wage what is referred to as “some sort of shock-and-awe campaign” against the Na’vis, and goad each other with Cheney-like one-liners: “We will blast a crater in their racial memory so deep, they won’t come within a thousand clicks of here ever again!” Worse, the viewer is encouraged to cheer when uniformed American soldiers are blown out of the sky and to root for a bunch of naked, tree-hugging aborigines led by a renegade white man on a humongous orange polka-dot bat.

Let no one call so spectacular an instance of political correctness run amok “entertaining.” I look forward to the Limbaugh-Hannity take on this grimly engaging development—which will perhaps be roguishly interpreted by Sarah Palin as the last stand of indigenous peoples (like Todd!) and women warriors against Washington bureaucrats. At least Avatar won’t win James Cameron a Nobel Peace Prize — but, then again, it just might.