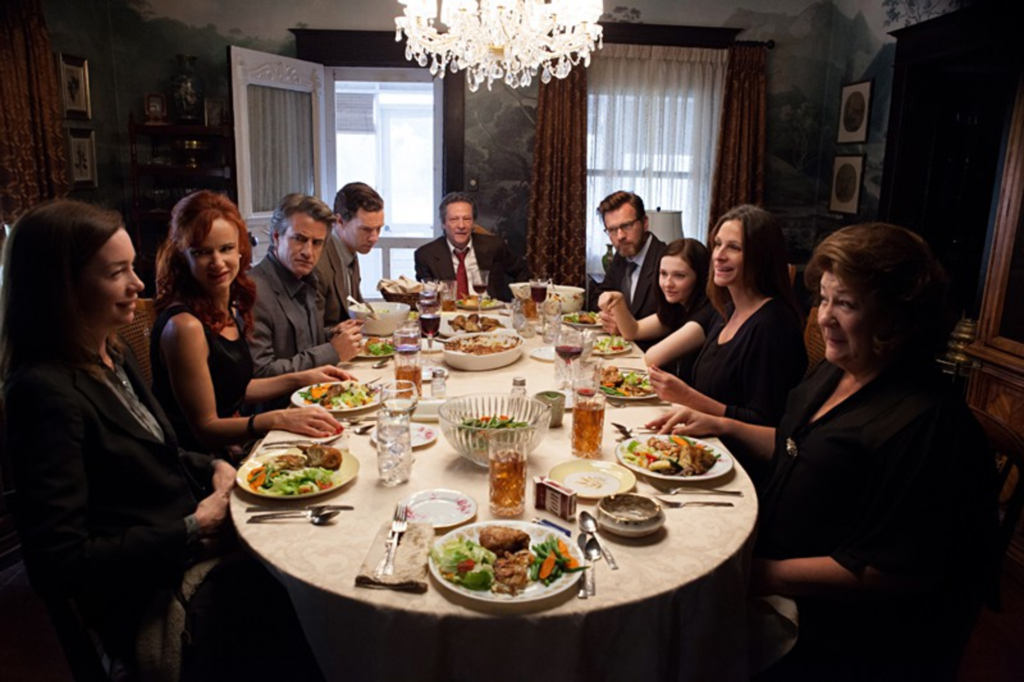 “Why don’t you go fuck a fuckin’ sow’s ass!” And so Meryl Streep’s matriarch introduces herself in August: Osage County. Drugged out, suffering from mouth cancer and oozing insolence, Streep’s Violet Weston fires this redneck salvo at her long-suffering husband (Sam Shepard).

The older and less self-conscious she gets, the more fun Streep appears to have with her performances. And if ever a part called for restraint-free vehemence, it’s Violet, a bitter, miserable mama grizzly who sets everyone around her in a homicidal mood whenever she opens her mouth. But an earnest sympathy still seeps out of Streep, and that’s part of what makes this adaptation of Tracy Letts’ Tony Award- and Pulitzer Prize-winning play such a misguided slog. Directed with unnecessary sincerity by John Wells, August arrives on film housebroken — a scandalous Southern Gothic neutered and defanged for Oscar-bait purposes.

Julia Roberts, Juliette Lewis and Julianne Nicholson play Violet’s daughters, who convene at the family homestead after their daddy is reported missing. The sisters have problems of their own. Roberts’ character has an embittered daughter (Abigail Breslin) and a husband (Ewan McGregor) on his way out. As you’d expect, the movie consists largely of Streep and Roberts trying to out-screech each other. The supporting cast, which also includes Chris Cooper and Margo Martindale as elder relatives, fortunately stays more even-keeled.

The sentimental Wells truncates the source material (Letts gets screenplay credit), and his movie unfolds with a straight, solemn face, even when the events should inspire giggling at their trashy wrongness — chief among them the secret romance between Nicholson’s spinster daughter and her first cousin (a dunderheaded Benedict Cumberbatch). But the relationship is played out seriously and adorably.

You wonder how William Friedkin, who has already adapted Letts’ Bug and Killer Joe for the big screen, would’ve handled August. Friedkin seems to understand that films based on the playwright’s work must be as grungy, insular, claustrophobic, hysterical and just plain fucked-up as they are onstage. The Harvey Weinstein-approved film version of August: Osage County is just the opposite — it’s too damn respectable.