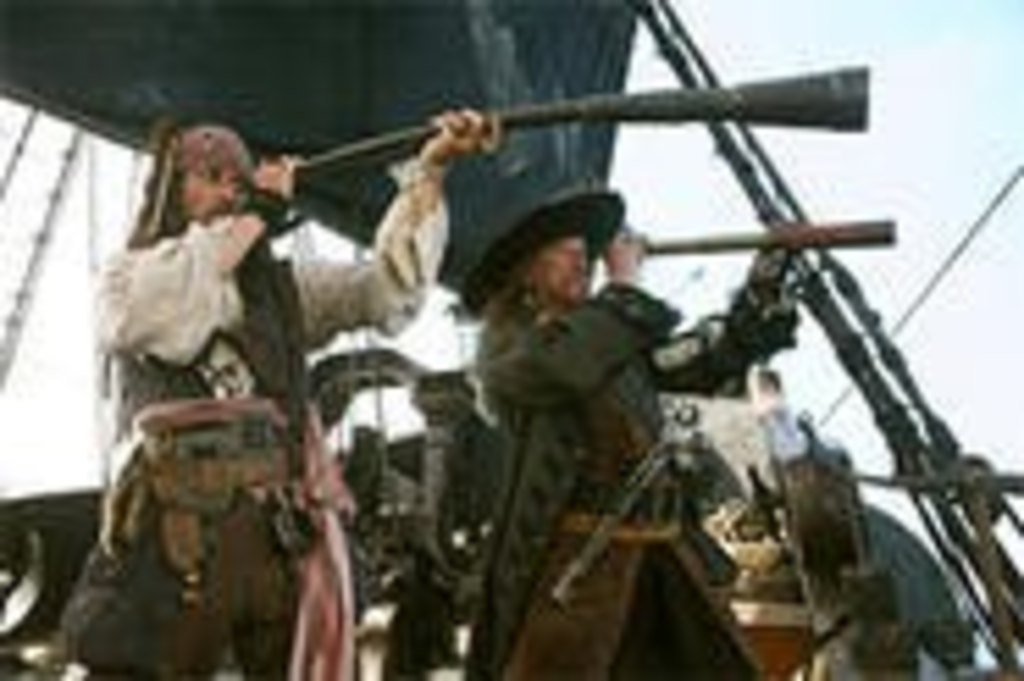 And so Disney’s immense, booty-busting, pro-piracy epic comes to a conclusion. I doubt very much that Pirates of the Caribbean: At World’s End is the last we’ll see of Captain Jack Sparrow and, you know, all those other people. How could it be? Treasure remains to be squeezed from moviegoers, great swaths of whom are evidently captivated by this imbecilic giant squid. Far be it from me to spoil the conclusion of the picture, which may hint at adventures to come. Not that I could even if I tried: Long before the third, fourth or fifth climax in this endless summer obligation, I sank into my seat in a passive, inattentive stupor, fully submitting to the fact that I hadn’t the slightest idea what the hell was going on.

POTC:AWE is a lukewarm maelstrom of secret agendas, double-crossings, tricky alliances, back stabbings, familial complications, romantic entanglements, political conspiracies, warring factions, hidden gods, cheeky monkeys and excessive eyeliner. Some of that stuff is linked to events from the previous installments. Some is freshly pulled out of the collective ass of director Gore Verbinski and writers Ted Elliott and Terry Rossio. Most of it is incomprehensible.

The story begins with the rescue of Jack Sparrow (Johnny Depp) from the Locker of Davy Jones (Bill Nighy), doomed captain of the Flying Dutchman, master of the crusty Fish Pirates, owner of the most repellently vigorous facial hair in modern movies. The Locker — death — is a kind of 16th-century, white-on-white Matrix in which Sparrow, intuiting himself as the most entertaining figure in existence, hallucinates the antics of several dozen Sparrow doppelgängers while stranded beside the Black Pearl ship in an abstract expanse of desert.

Boring Will Turner (Orlando Bloom), plucky Elizabeth Swann (Keira Knightley) and blustery Captain Barbossa (Geoffrey Rush) effect his rescue through a keen understanding of the peculiar metaphysics ruling the Pirates universe: randomly generated nonsense. Thus, by plunging their vessel over a watery precipice, they are landed on a tropical beach, upon which legions of industrious crabs, neatly hatched from smooth, white stones, are hustling the Black Pearl overland to meet the rescue party. Via another application of the Whatever Principle, our heroes will exit the Locker and embark in the direction of additional inexplicabilities.

Ah, but I have forgotten Captain Sao Feng! Luxuriating in the hysterical chinoiserie of his exotic Singapore lair, this outrageous Oriental (played by Chow Yun-Fat) has been wedged into the Pirates panoply in order to exude colorful slant-eyed menace, enable the destiny of a white woman, then die. Impaled by one of the many large wood splinters incessantly flung about the narrative, Sao Feng bestows a totem of Super Piratehood to Miss Swann. Off she goes to join a reunion of the Super Pirates and fend off the snooty imperialists of the Dutch East India Company.

But seriously, who cares? POTC:AWE isn’t a movie so much as a delivery system for two kinds of special effects: those created by computers and those generated by Johnny Depp. The former peaked with the attack of the Kraken in Dead Man’s Chest. I do rather miss that hefty, peevish sea monster. The transmogrification of voodoo priestess Tia Dalma (Naomie Harris) first into a 50-foot woman, then into 50,000 digital crabs and finally into a vast, oceanic drain is not, alas, as cool as it sounds.

When Depp freaked his funk in The Curse of the Black Pearl, it seemed a sneak attack, the deployment of frisky, flamboyant, softly subversive shenanigans across the cold, impersonal grain of corporate entertainment. Dead Man’s Chest put him in the spotlight, and he withered; mascara blooms of such mincing rarity depend on nooks and shadows to flourish. At World’s End is even more aggressive in flaunting and defanging his spectacle, resorting more than once to the multiplication conceit. “Give ’em what they want” has never been so literal, to such diminishing returns.

The movie’s punishing length could easily and harmlessly have been abbreviated by removing witless Will Turner, whose sub-Shakespearean psychodrama with his cursed, crustaceous father (Stellan Skarsgard) is representative of the film’s mind-numbing, indulgent exposition. Of all movies, this is the last you’d expect to talk and talk and talk and talk, but on it goes, everybody yapping about what they just did, what they’re about to do, what they should be doing, what it will mean if they do X instead of Y. Dude, just fucking do it.