At the Spencer, surprises from new Asian artists 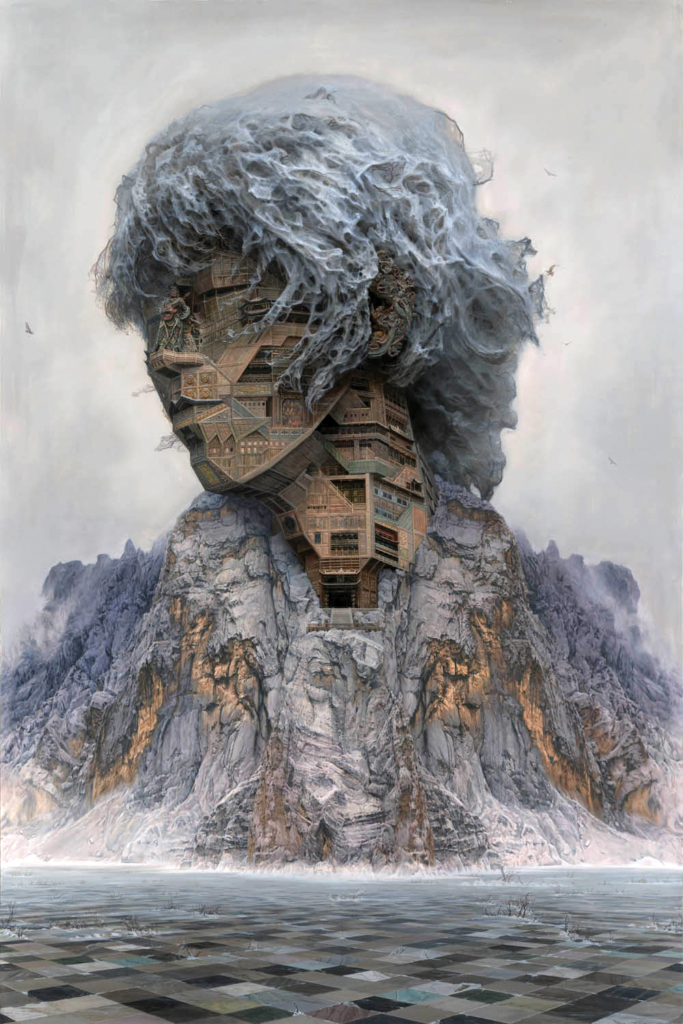 In the West, the phrase Asian art typically evokes delicate rice-paper prints, robed women in minimal interiors, and sublime waves of Japanese landscapes: museum pieces. It’s no surprise that imaginative contemporary works are being made in the East. But what’s on view in Temporal Turn, at the University of Kansas’ recently renovated Spencer Museum of Art, nevertheless startles. The exhibition gathers arresting art that addresses the unstoppable march of time and the spiritual link between humanity and nature.

The show, divided into five categories, spreads out across the two-story gallery. The names of these rubrics — Pulse, The Edge of Infinity, Mythopoeia, Human/Posthuman/Inhuman, Anthropocene — risk shading the viewer’s impressions of the art gathered therein. But the verbal indulgence doesn’t have to inhibit your intuition, and the visuals consistently stimulate.

New meaning is given to the expression “rock god” in Du Kun’s “Jiayuan Mountain,” part of his portrait series of Chinese music stars imagined as colossal temples settled in mountain landscapes. Each in this run is breathtaking in its rich detail and luscious color palettes. Here, the musician’s features, built from elements of Buddhist and Confucian architecture, conflate traditional and modern modes of identity; shoulder muscles are articulated by jagged vertical mountains dusted by a snowy fog, and the hair is rendered like a bank of sculpted clouds. A bird on the left edge, near the eyes, gives the viewer a sense of scale. The closer you are to the piece, the more details reveal themselves. The bridge of the nose, for instance, is an emperor in formal garb strumming an instrument. Du Kun’s obsession with musicians has reached worship status, but his homage is rooted in traditional Chinese culture and deep history.

I wish there were a way to experience Konoike Tomoko’s “Donning Animal Skins and Braided Grass” in a different setting. The six-legged wolf is mirror-tiled, like a walking disco ball, and is the most attractive piece on the first floor. But its position in the gallery, beside a window, limits the full glittering effect on a sunny afternoon.

The sculpture coincides with an 11-minute black-and-white animation of wolf and a liminal creature called a mimio — think sentient emoticon — on a quest through the woods. The narrative emerges from a kind of dream logic, with bits of mythological ephemera strung across a loop that seems to have no beginning and no end. Wolves are extinct in Konoike’s native Japan, where at one time indigenous Ainu people believed themselves born of a goddess and a creature that resembled a wolf. “Donning Animal Skins” alters and elevates the animal in a way that demands consideration of the myth and the reality as a single history: Reverent lore couldn’t save the Hokkaido wolf from extermination.

As you make your way through the first floor, maniacal clicking periodically breaks your focus and lures you into the darkness of a side room. It comes from an old adding machine, stuck banging out the same command on a strip of thermal paper, which has become tangled and ineffective from the unyielding abuse. The installation “Kansas Bokaisen Project,” by Park Jaeyoung, is set up like a cluttered research lab, with an animal being pumped with air in a plastic bubble. The creature is a Japanese urban legend, called a bokaisen; under the steamy incubator in the middle of the lab, it resembles a possum. Paging through the notebooks on the table provides more information about an expedition to a land where the new animal was discovered, native to the fictitious world that unfolds as you paw through the interactive materials on the desk. A simulacrum of taut empirical research mingles with the scribbles of a mad scientist.

For images you didn’t ask to see and will probably try to forget, move upstairs and sit in the curtained-off room in which Lu Yang’s “Uterus Man” runs. In this surreal animation — set to loud, jarring EDM — the reproductive process mutates into a militarized nightmare. You will see weaponry and biology merged. You will see a baby roaring on the end of an umbilical-cord leash and a go-kart made of human bones, its elongated spine whipping around the back like the tail of a scorpion.

The central character of the animation is a gender-ambiguous futuristic superhero wearing a suit that makes the human body transparent. Uterus Man procreates, graphically, and uses the child as a tool for destruction. Sexuality and gender are explored through an assault of violent images (Lu’s collaborator on the project is a Japanese artist who had his genitals removed and served as a meal to paying guests. Really), and even when physical violence is absent from the screen, the intensity of the music and animation leaves you no less unsettled. “Uterus Man” hammers home the Human/Posthuman/Inhuman subcategory name, hammers it right into your skull. Lu Yang’s work challenges sexual and cultural conventions with an exhaustive rigor that borders on the murderous.

That said, Yang’s anti-narrative storytelling implores you to consider time as a tangled line. And if there is a single theme in Temporal Turn, this is it. The film succeeds in intensifying the entire show by being its least contemplative, its least beautiful. This is art with the power to free artists who follow its wildly unpaved path.

Still, there’s more to see in Temporal Turn. Walking through it, you understand that artists in Seoul, New Delhi, Tokyo and Beijing are producing imaginative work at a pace that mirrors the rapidity of the region’s overall growth. It’s an absorbing collection, one that even seems to be in conversation with the permanent collection — just as the artists on view consider the timeline that connects their new with the unforgettable old.

Through March 12 at the Spencer Museum of Art, Lawrence