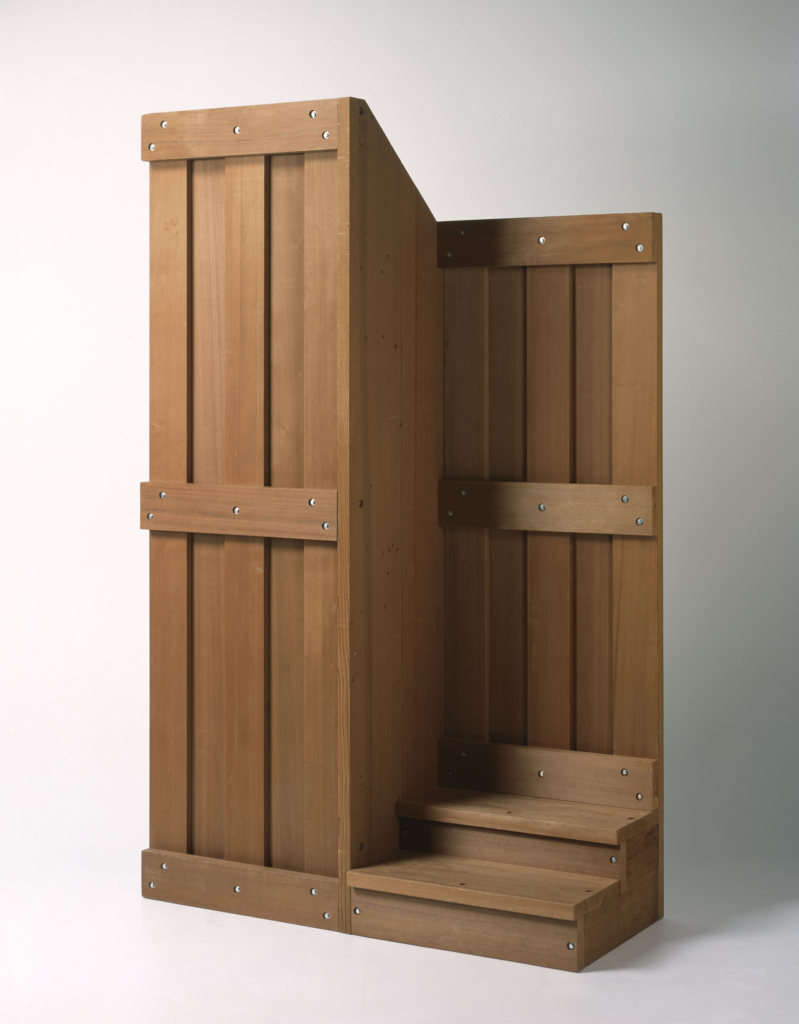 Siah Armajani‘s politically effective exhibition at the Nelson confirms that enthusiasm for Jeffersonian democracy isn’t always homegrown. One of this nation’s most important public-art figures, Armajani was born in Iran in 1939 but is now a naturalized U.S. citizen. In commissioned work all over the country, he typically suggests the ideals of a society that encourages open dialogue among its citizenry.

Armajani is perhaps best known for his gorgeous Irene Hixon Whitney Bridge, a pedestrian walkway that crosses over a freeway in Minneapolis to link the Walker Art Center and Sculpture Garden with downtown. Armajani’s sculptures emerge out of a love for the language of architecture — houses, gazebos, doors and windows become sites of convergence that underline his devotion to democratic ideals.

“Backdoor — Frontdoor,” for example, is a redwood structure whose access and egress — or lack thereof, because there are no handles or knobs and nothing moves — introduces broader ideas about who has access to certain rights and who doesn’t. Two doors that don’t open (one with two steps leading up to it) invite questions about what may be contained behind the doors, about how we access information and one another. Are we on the inside or the outside? As in all of his works, Armajani creates a broadly conceptual yet easy dialogue with viewers. Doors are straightforward. They let us in and out (or not) and, as symbolic gestures, they allow us to expand that conversation.

This exhibition from the Nelson’s permanent collection — photos, tiny hand-built maquettes and a couple of large-scale sculptures — gives viewers an excellent opportunity to place Armajani’s work in context. His signature icons emerge as dominant conceits in socially relevant work.

Often described as neighborly, his work allows the interplay of humans by walking across a bridge or by gathering within a structure or a site (such as the plaza in New York City’s Battery Park). From the Atlanta Olympics Torch to a lighthouse and bridge on Staten Island, Armajani’s works are connective tissue linking us physically and metaphorically.

The six maquettes that make up “Dictionary for Building Models” show us the artist at work. Rough, quick and intimate, the tiny wood and cardboard sculptures are like spontaneous conversations and ideas. The wall tag notes that Armajani has made more than 1,000 maquettes, exposing the fecundity of his processing mind.

“Bridge Book” is an artist’s book of seven woodcuts depicting bridges. As mani­festations of his love for connection between peoples and ideals, bridges are humble yet powerful symbols. The uncomplicated woodcuts show the dynamic gesture in a few elegant lines.

Another example of the clean aesthetic that characterizes his work is the large-scale sculpture “Elements #16,” made of beautiful green stained wood and patterned aluminum. Devoid of flourishes or unnecessary parts, Armajani’s sculptures elegantly convey people and ideas. The small-scale sculpture “Limit Bridge III” borrows from the American vernacular of wooden bridges. Almost Shaker-like in its simplicity, it becomes a perfect combination of utilitarianism and conceptualism. While Armajani’s sculptures always lead us across an expanse of space or idea, they always leave room for coming back again.