At the Living Room, Apathymeets a bitter end 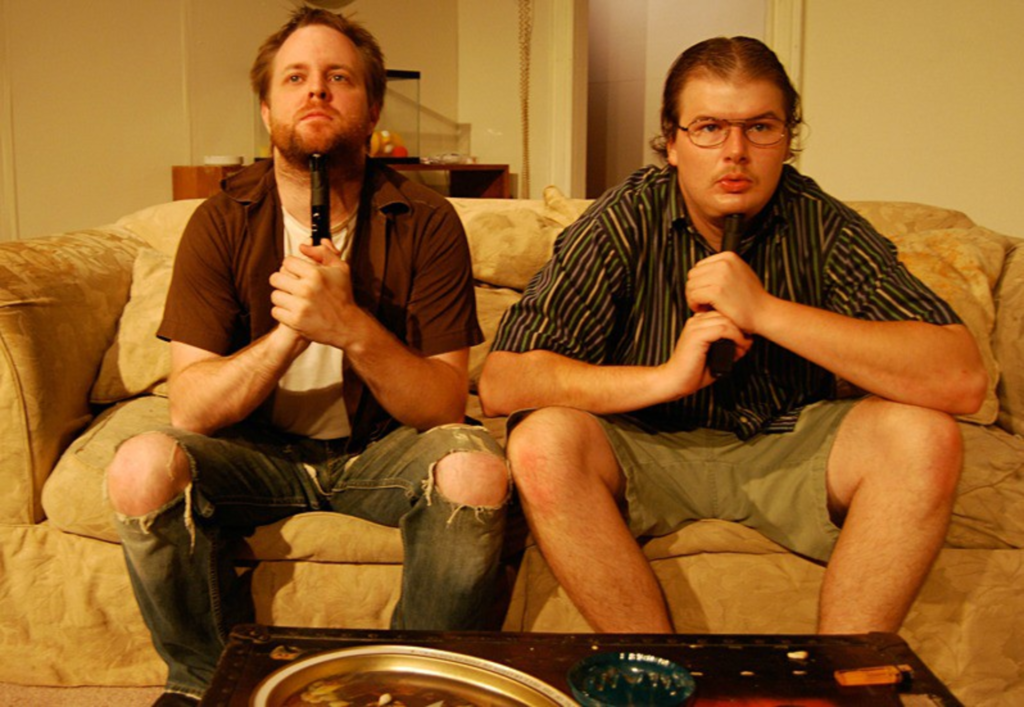 Chekhov famously decreed that a gun shown in Act 1 must be discharged before the final curtain. His point being that there can be no empty threats or unfulfilled promises in drama. What Act 1 sets up, the final act must fulfill.

Perhaps a corollary can be added for suicide notes prominently displayed. The guns in Bryan Moses’ new play, At the End of Apathy, are brandished, pointed and, indeed, eventually fired, but the contents of the note — which is, one gathers, more manifesto than farewell — remain a mystery.

Apathy begins with a funny but excruciatingly drawn-out gimmick. For the first three minutes, just two tiny points of light, moving slowly and continuously up and down, are visible — two cigarettes being smoked in the dark. I’m not known for my patience, and as those cigarettes kept rising and falling, my skepticism rose. An opening like that had better make it up to the audience with big punches of action, incident and surprise. Apathy delivers, starting with its very next high-impact visual.

Danny and Tom are best friends and fellow misfits, now at the end of their ropes. They aren’t merely down on their luck. It seems safe to say their luck has never been good. And yet around these listless losers, Moses has written and directed a play with great pacing, wit and energy. Partly this is due to the fantastic chemistry between the leads: Sean Hogge as Danny and Bob Linebarger as Tom. Hogge is great as the angry, agitated young man damaged by a broken relationship with his father. Linebarger, a relative newcomer to the Kansas City theater scene, makes confused sidekick Tom both funny and affecting.

At its best (and there are long stretches during which this play is at its best), Apathy recalls Pulp Fiction, with the rhythm between Danny and Tom achieving something of the absurd comic heights of the riffs batted around by Jules and Vincent (Samuel L. Jackson and John Travolta, respectively), similarly interspersed with flashes of horrific violence. There’s a bit about greasy balls versus a big ball of cyclical shit — “ironical,” the slow-witted Tom calls the latter, meaning a ball made of iron. Not that Danny is so bright himself. At one point, the two accuse each other of “condensation.” Together they experience frustrating difficulty in deciding upon acceptable final words. And they quibble over who should get to be the “counter” — that is, the one who gets to count down to the big moment. The question becomes whether they can manage to kill themselves without first annoying each other to death. Also: How are they supposed to concentrate on anything when they’re starving?

Yes, this is a bromantic comedy about suicide. We’re not really given a reason for the death wish. We simply see two hopeless guys living meaningless lives. Should their deaths be any less meaningless? Presumably anything more is in that note in the manila envelope stuck to the closet door with a dart.

What makes it work so well, besides the actors’ physically winning performances, are Moses’ light directorial hand; Tim Ahlenius and Shawnna Journagan’s accurate set and props; and, most of all, the script itself, which is packed novel-dense with brilliant and sometimes hilarious lines. (One of the more memorable: “Stop invalidating my powerful moments!”)

But. And there is a big but.

Moses has set his play on the evening of September 10, 2001. Where angels, novelists and other playwrights have feared to tread, Moses has trod — and spat on the filthy carpet, too. Given the timing, the joke is ultimately on Danny and Tom. But if we care about them, which Moses ensures that we will, the joke’s on us, too. Are we sympathizing with these two fuckups or are we appalled and superior? Their cluelessness about the events of the next morning, events far more catastrophic than anything they’re scheming, would seem to indicate the latter, but the portentous title, the anguished Smashing Pumpkins soundtrack, and the care with which the main characters are developed signal differently.

Moses and the Living Room have made white male disaffection their subject, to the exclusion of almost any other topic — or character. Those on the periphery — Kelly Main’s sweet, proselytizing Baptist (a broadly drawn straw man), George Forbes’ decent pizza deliveryman — suffer collateral damage, victims of the play’s inarticulate obsessions. Although the outcome in both cases is unintentional, the images are ugly and disturbing.

Is this play wrestling with ideas or just sucker-punching them? Is its conspicuous setting grossly over-reaching, self-important and sickeningly exploitative of 9/11 or almost relevant enough to be justified? Apathy raises these questions and more. One thing is for sure: Moses has major talent and balls — greasy, ironical and otherwise. It should be fascinating to see what he does next.