At the Kemper, Hew Locke interrogates the complex legacies of British imperialism 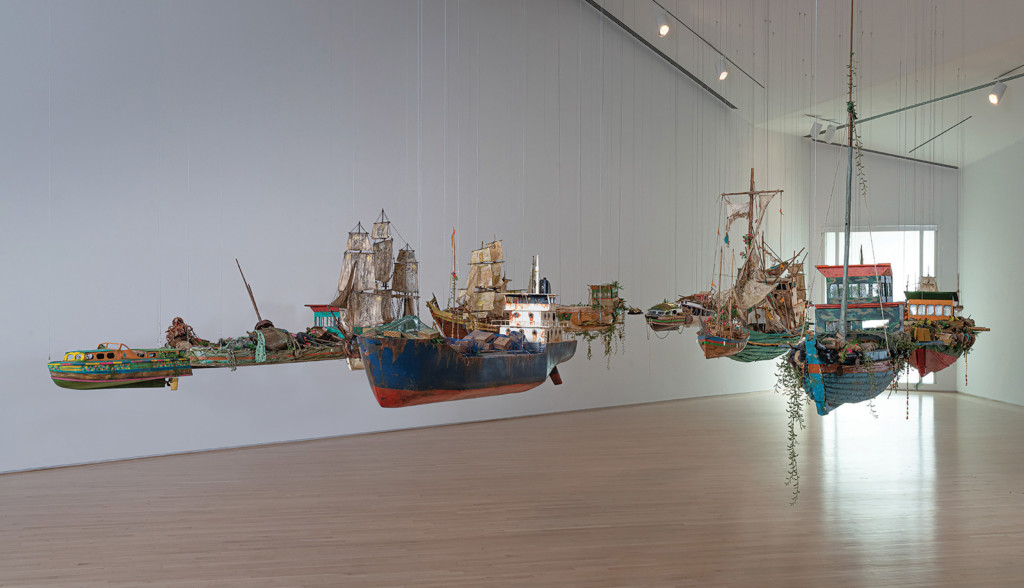 We Americans are often guilty of seeing ourselves as the center of the story. Here’s the Thing, a comprehensive exhibit of the British artist Hew Locke’s work showing now through January at the Kemper Museum of Contemporary Art, offers a chance to reflect on global tensions and the movement of power from another perspective.

Or, rather, it offers that chance provided you are already knowledgeable about the history of British imperialism and the culture of the former British colony Guyana, which provide the backdrop of Locke’s work. If, like me (and I suspect many a Kansas Citian), you walk into Here’s the Thing less than fully confident in your ability to locate Guyana on a map, you may very well leave this show unsatisfied.

Locke, who is black, was born to Guyanese parents who raised him in that South American country. Images of British royalty and ships course through his work in sculpture, works on paper, and installation. But who were these queens? What’s the story behind these ocean voyages? Alas, the curators have designed this exhibit in a way that offers little in the way of context or guidance. Notably absent are wall didactics—those helpful little placards that contain the artwork’s title, medium, and, often, a commentary on (or interpretation of) the piece. Here, you’re handed a laminated guide with the titles. For commentary, you’ll need to download an app to your smartphone. On my first visit, I didn’t even learn about the app until I was exiting the exhibit.

This may sound like quibbling. But, particularly in this show, that extra information is essential to appreciating the art. The exhibition includes a 21-minute video called The Tourists, which slowly pans through a ship’s interiors, revealing mannequins dressed in masks. Sans context, it’s a dreamy trip through a mesmerizing otherworld: a baker slides bread into the oven while wearing a golden lace mask, four sailors build a replica boat adorned with pearls and flowers. Cool to look at. But what does it mean?

Here are some things that would’ve been helpful to know before viewing that video:

The ship in question is the HMS Belfast, currently afloat on the Thames River as a permanent component of the Imperial War Museum in London. It’s also the last ship that remains from the landing at Normandy on D-Day. Hew Locke was invited by the Imperial War Museum to do an exhibit on the HMS Belfast. It features mannequins demonstrating the life and work of the sailors, which Locke re-envisioned. On the ship’s final voyage, the sailors made a stop in Trinidad in 1962. Locke drew inspiration from that historical fact, dressing the mannequins in masks and props as though they were preparing for Carnival in Trinidad.

It turns out that, rather than just a mysterious ship full of strange characters, The Tourists is an ironic take on military men participating in cultural tourism rather than doing the work of subjugating those they’ve colonized. But good luck piecing that together with what the Kemper gives you. 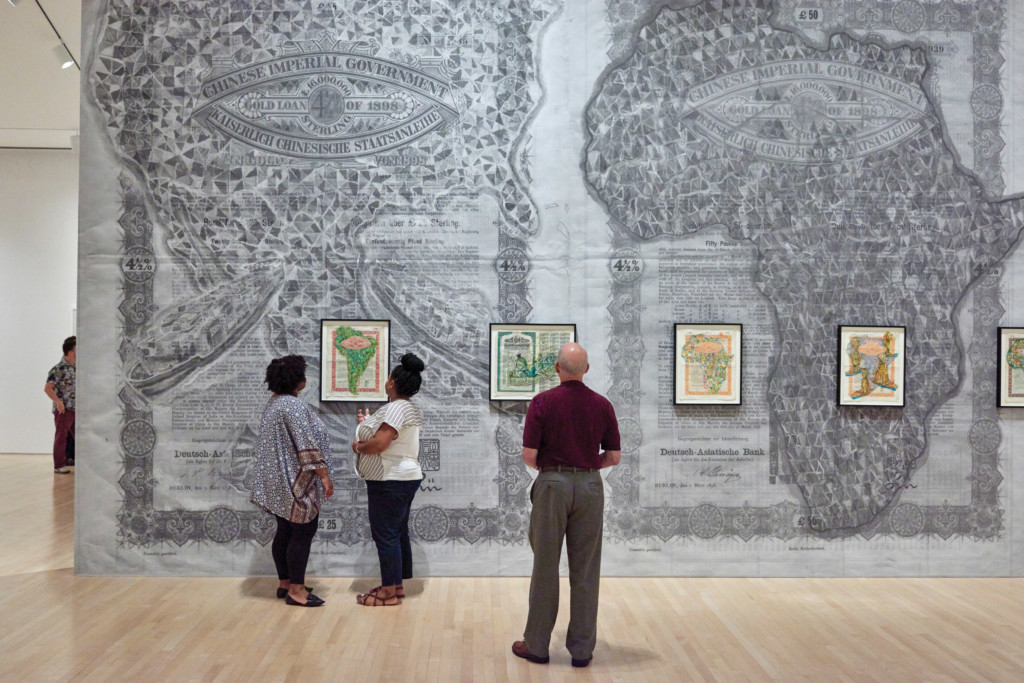 Ships are a prominent theme in Locke’s work. The Armada, a collection of several dozen immensely detailed boats, ships, and rafts, dominates the exhibition. The scale is impressive, if at times overwhelming. Think of all the boats on the world’s waterways, right this minute: warships and dinghies, pleasure cruises and survival rafts. Now imagine Locke brought them all together and reimagined them in this miniature fleet as aligned and floating in the same direction. It’s difficult to digest it all—all those objects, styles, and symbols at play.

Locke’s other dominant theme—British monarchs—feels as much like reverence as critique. Untitled (Orange Queen) is the familiar shape of Queen Elizabeth’s face, created from an exuberant collection of plastic trinkets, a nod to present-day global commerce. If it’s meant to condemn, plastic drawn from the great swaths of trash in the ocean, dripping with oil, might have been better suited to the task. Instead, these brightly colored objects (which include lots of butterflies) are beautiful in their own way. The light coming through the translucent plastic and the twisted, crownlike spires emanating from the queen’s head suggest the radiance of a deity rather than the representation of something more pernicious.

In his Souvenir series, Locke has adorned busts of famous British royalty with gold metal masks and crowns, chains, military medals, and more—a gaudy, over-the-top regalia. These busts were made as souvenirs for purchase at the Crystal Palace in London (hence the title). “Souvenir” also literally means “to remember” in French, and here Locke seems to be calling for remembrance of the burdens created by these monarchs. Queen Victoria, her son Albert Edward (later King Edward VII), and Princess Alexandra of Denmark (his wife and later Queen Consort) ruled over the British Empire at a time of relentless and wide-reaching war, slavery, genocide, famine, and more. Alongside gold metal and pearl decorations, the bust of Princess Alexandra features cowrie shells, notoriously used as currency in the slave trade.

On his website, Locke describes the figures in this series. “They are weighed down by the literal burden of history,” he writes, “and this goes back to my idea of how a nation creates itself, what stories it sells to itself and how this relates to ideas of Britain and its history that are weighing down the minds of people today.”

While the British monarch’s individual power has been curbed over the last century, British royalty remain the embodiment of the country. As used by Locke, they represent not just the atrocities they are oversaw as individuals, but also stand in for the entirety of the empire and its legacy.

Drawing an effective connective thread between the imagery of monarchs and the impact on those they colonized, Hinterland is based on a photograph of a statue of Queen Victoria in Georgetown, Guayana, displaced to the Botanical Gardens after the country’s independence in 1966. The photograph of the statue has been painted over with ephemeral figures, ghosts and skeletons playing instruments, animating a march of the dead around her. The Queen looms large, but she’s decaying. The dead surround her, persistent in their triumphant haunting.