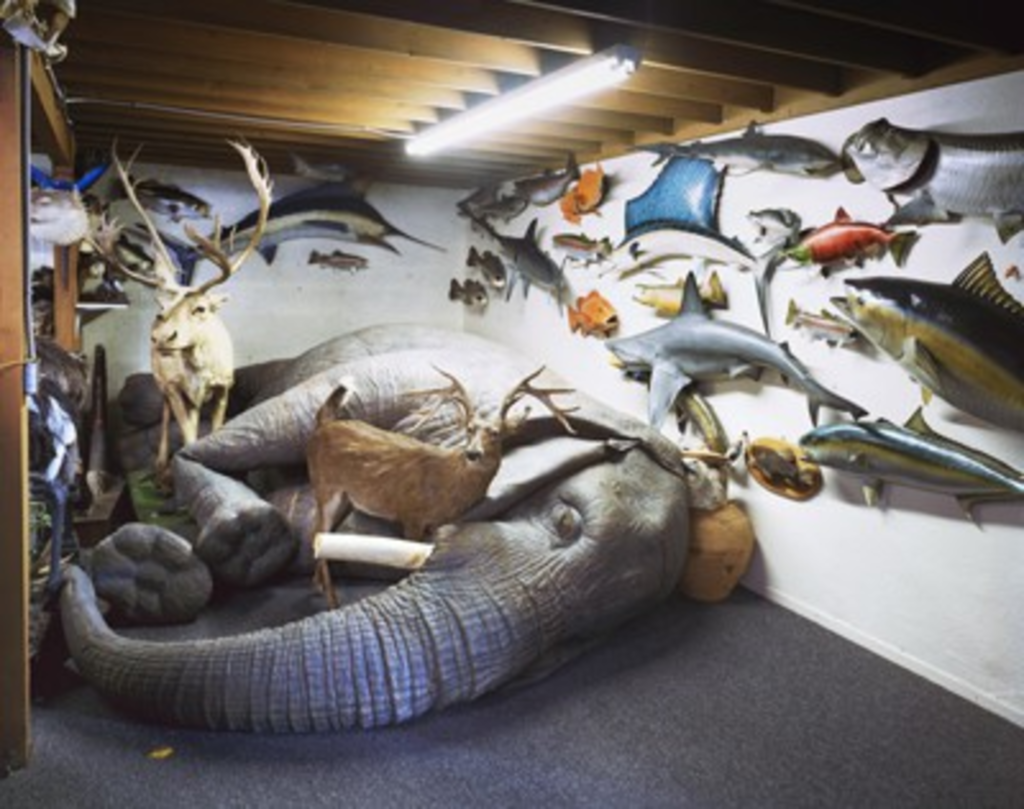 “Amanda and Rata,” for example, is a photograph of a mother and an infant in a leafy enclave. “Nancy’s Margaritas” is a snapshot of Lepore’s older cousin — a two-fisted margarita toter — standing around in her bathing suit. These portraits seem incongruent with other works that attempt to show humans tending to nature or animals.

“Untitled (Burbank),” a stark storeroom shot of fish and deer and an elephant prop, bears uncanny resemblance to the well-known photography of Richard Ross’ renowned Museology series of preserved animals in natural history museums and taxidermy shops. But it’s unclear how “Untitled (Burbank)” fits Lepore’s theme. Sure, the animals have been “restored,” technically speaking, but to what end?

There’s also a jarring, over-lit quality to many of these images. In several, the light appears white-hot, as if the photos were overexposed. In “Untitled (Brooklyn),” a young woman who cares for falcons stands in a diminutive living room in her socks and underwear as she reaches for the falcon that flies off its poo-covered perch. None of these elements are particularly interesting, and her shadow on the back wall is distracting to the composition. Like many of the photos, it simply looks like a random, if quirky, portrait.

Then there’s “Billy and Cal.” These two older men — a couple — are posed in a church pew, intimately embracing. While it might be a tender moment between two humans, it’s contrived: They’re gay; they’re in a church. We get it. But why is this photographic moment more restorative than any other image of a couple? This photo could be in an exhibition about church interiors or gay couples or men who wear fur. As in many of the images here, there’s nothing that really conveys “restoration” except for the artist saying it does.

And yet, the young woman who cares for wolves in a sparse field near a freeway overpass elicits empathy because she’s in a photo that tells a full story. Lepore shows her kneeling among three wolves that appear to relate to her like well-tended dogs. The photographer backs out of the scene, opening it to naturally integrate the grouping of human and animals. A matte-gray sky is well-balanced by a gnarled tree branch that claims half of the background. Here the composition underlines Lepore’s intent to suggest that humans and nature are interacting to the benefit of both.

It’s a rare restorative moment in an exhibition that otherwise shows an artist spreading himself and his subjects too thin, diluting his own thesis with incongruent images.