At the Improv Thunderdome, competition guarantees you’ll laugh your ass off 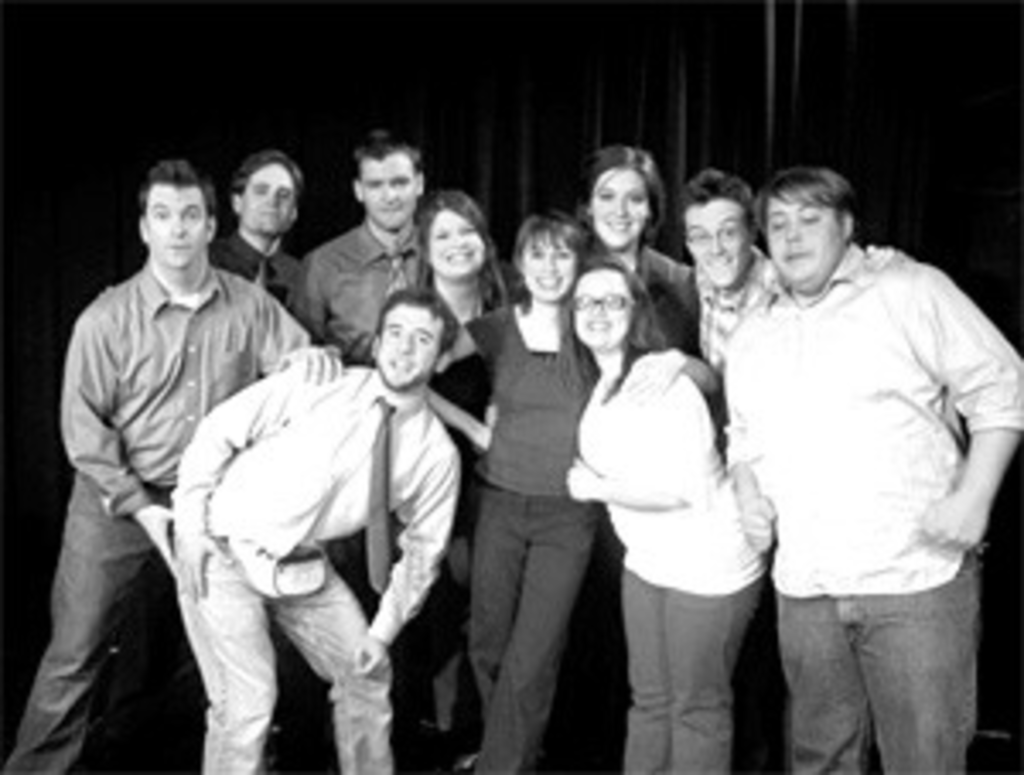 I don’t care who you are, where you’re from, what you’re into, how much you sulk or how hardcore you front. Last month, at the final qualifying round of Jared Brustad and Ed Dorris’ Improv Thunderdome, you would have laughed. Hard. Often. Maybe embarrassingly, spitting out your drink, needing a Kleenex once in a while.

When Trish Berrong, of one-off improv troupe Spite, pixied her face up with satisfaction while she mimed taking a retaliatory dump inside a friend’s purse, Dick Cheney would have laughed.

Those two miserable Muppets, the ones who get off heckling a show they hate? When TBA’s Josh Steinmetz belted, in a love song to the man his character had fallen for, I wanna bottom out in your canal, even those fuckers would have lost their shit.

By the time UMKC’s Makeshift Militia stormed the tiny stage, throwing gang signs and boasting that they weren’t “nothing to fuck with!” the truth was clear. Thunderdome is a watershed moment not just in Kansas City improv but in Kansas City comedy, the moment when, at long last, daring, inventive performers + smart, open-minded audiences = a shot of True Love Always.

In short, March’s competition was the best comedy show to hit in ages. In it, three teams of local improvisers faced off in half-hour sets of their own design. The audience voted a winner, that winner advanced to the finals, and the little comedy scene that too few people pay attention to suddenly felt too big for its basement. More on that another time. For now, I have the sad news of announcing that the follow-up show, Saturday’s championship, has been sold out since last month. For those lucky enough to make it, those mired in the coulda-woulda-shouldas and any Improv Thunderdome fantasy leaguers out there, here’s a breakdown of the competing finalists. (Some good news for the unticketed: Brustad is promising a second season, probably kicking off in June.)

Loaded Dice (Charley Belle, Rob Grabowski, Patrick Lindhorst, Clay Morgan): The most experienced troupe in the finals, Loaded Dice also scored the cleanest, clearest victory in the preliminaries. In round one, the group’s set — a family dinner gone horribly wrong — won the tournament’s wildest, most sustained laughter, despite being saddled with the worst audience suggestions. Celebrating the crowd-chosen holiday “Go Commando Day,” the family squabbled, reminisced, debated how to pronounce halcyon and, by the end, had worked the iffy idea of not wearing underwear into a bizarre, heartfelt celebration of our new world freedoms. It all built to a memorable flashback of family ancestors striding proud and pantsless onto Ellis Island, a scene almost as stirring as it was hysterical. The cast, adept at suggesting whole lives with just a few quick, spontaneous lines, gave us not just a grand comic scene but also a full family history, with characters so sharply drawn that they inspired the rarest kind of laughter: participatory. We often laughed in anticipation of what each would say next and were consistently rewarded with lines both surprising yet inevitable — a rarity in an art form whose performers are too often hung up on the random. Will They Win? If they’re on, they should.

Scriptease (Rene Boudreaux, Drew Davidson, Clayton Ingram): With its competition bound up in conceptual rigmarole, this young, likable, offhand troupe coasted to the finals on the weakest draw of the tournament, demonstrating that, before a paying audience, accessibility trumps the finicky avant garde. (That’s not to say that I didn’t prefer the brainy, Godot-inspired set from Babel Fish, but on that score I was as alone as humankind in the howling void.) Scriptease improvises a Hollywood disaster film, one in which the global threat is inspired by an audience suggestion. Hitting all the familiar beats of the final reels of an Armageddon, this trio’s set is like a shambling Mad parody of the genre, with rousing speeches, heroic sacrifices, wild plans that just might work, and stings of music telling us what to feel. Tightly structured scenes reign in the troupe’s natural discursiveness, but in February it still managed some deft dada. Eulogizing one of the fallen, Boudreaux touched a hand to his chest and announced, “He was strong in here, where it counts. He was weak on the bridge, where he fell.” Unfortunately, its emphasis on pop-culture satire overlaps with that of Makeshift Militia, which executes similar material with greater crispness and force. Will They Win? Probably not. They will make you laugh, though.

Maksehift Militia (Magie Hogan, James Nelson, Grant Prewitt, Ryan Meharry): All trained and tested in UMKC’s estimable theater program, these are theater folk, not comedy folk. But unlike both, they come on like rock stars. They’re stylish, commanding and dynamic, taking the stage with badass chants and Electric 6 blasting. Whatever they lack in improv-as-a-lifetime-discipline experience, they make up with presentational power. That they’ve won such a fervent following should serve as a lesson to their improv brethren: Act like you’re in a band, not on a softball team, and you might not have to cancel so many shows. They’re restlessly funny, too, specializing in absurd playlets that reel through pop, sci-fi, philosophy, the entire history of comedy and whatever stuck from their undergrad reading lists. (Their March set’s climax included a “deus ex Machina gun.”) Yeah, they’re sometimes willing to sacrifice coherence for a joke, but they usually make sure the joke is worth it. In round three, egged on by a fan-packed house that would have voted for them no matter what, they tore through ideas like the flux capacitor tears through decades. Facing down a robot invasion, one character crunched some numbers and announced, with all due horror, “Then these must reach robot sexual maturity at the age of four minutes.” Someone else shouted, “Show me that!” The Militia scrambled and then, somehow, hilariously, disgustingly, did. Will They Win? If they don’t split the vote with Scriptease, they just might.