At the Greenlease, Seth Johnson shares a little me time 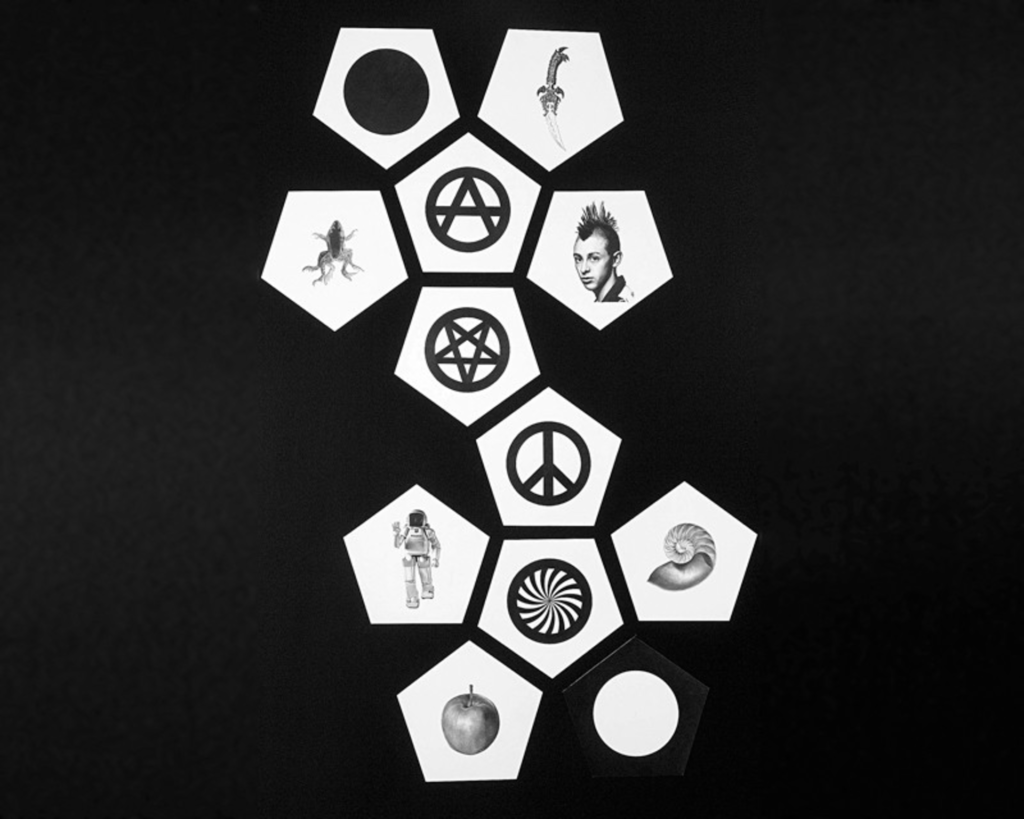 There’s no missing Seth Johnson’s artist statement. For Centuries of Self, his fascinating solo exhibition at Rockhurst University’s Greenlease Gallery, he has put it up as a looming block of text, six white-on-black paragraphs on an 8-foot-by-8-foot panel. It’s a barricade (Johnson calls it, aptly, “monolithic”) against casual viewing of the show, demanding a pause before you look at the works.

It’s so big that some people are bound to walk around it anyway, intimidated by its scale or unwilling to digest its rhetoric or figuring that it can be picked up later, on a piece of paper, and taken home (it can’t). But skip it and you’ll miss a lot.

What you’re hit with when you walk around the statement is what looks like a representation of a studio, including a desk set with drawing materials and useful items (a jar of granola, a work in progress on a board, stacks of perusable sketchbooks at the bottom of a cart that also holds records and a record player). The movable wall behind it, as well as the one that someone sitting in the desk’s chair would face, comprise a visual cacophony of found images culled from history, science, science fiction, Egyptology, vampire culture, film, cult sexuality, and more. Snakes, skulls, Disney princesses, the Stay Puft Marshmallow Man, a flexing Arnold Schwarzenegger, a He-Man action figure and dozens of other American totems from the 1980s and ’90s throw their competing colors and their packed-up layers of meaning in jumbled unison.

Are you ready to go back to the statement and find out what this is all about?

Difficult to reduce to a few key points, Johnson’s writing is, for starters, an invitation. He means for gallerygoers to pick around the items here, to touch what’s on that sawhorse desk, to set the little record player’s needle onto a hardcore 45 and listen, to stop and read one of the 90-odd books on a cinder-block-and-board shelf along the back wall of the gallery. But he’s also writing instructions, telling us how we might let go of standard art-viewing habits. Instead, he asks us to erase our subjectivity and abandon any rote contemplation of his intentions.

There is no true individual, goes Johnson’s statement, only a collection of systems, interactions and histories along a continuum. “We can choose to believe that ‘meaning’ is sitting and waiting patiently to be uncovered by our curious minds,” he writes. “In so behaving, however, we only skim the surface of our experience.”

So I noticed, my first time through, a book of poetry by Buckminster Fuller, a Swamp Thing graphic novel, a covetable 1969 reproduction of a 1902 Sears Roebuck catalog, and a beautiful coffee-table book depicting Samurai armor. You’ll linger over other objects, things I missed. The installation leads you into an idea temple, one that provides countless opportunities for discussion.

Of course, Johnson is the common thread binding this ephemera, and he says he can talk at length about every separate image on display here. He has been collecting them — from magazines, books, online — for years.

Walking through the gallery with me, he points to an instantly recognizable rendering of an almond-eyed, gray-faced alien — the one from the cover of the book Communion. Johnson’s gaze intensifies. “That, when that first came out, that affected me deeply. It scared me.” He goes on staring and falls silent.

When the gallery is quiet, Johnson’s show takes on an eerie tone. The books on that long shelf are presided over by plastic Halloween masks, painted by Johnson with creepy expressions. They’re monsters you can’t quite place but seem very familiar. Look long enough at the titles of the mismatched volumes — among them, A Brief History of Everything, Ritual America, Giordano Bruno and the Hermetic Tradition, Infinite Jest, The Carnivals of Life and Death, The Evolution of Useful Things, Order Out of Chaos — and a certain logic in their sequencing seems to emerge. (In any event, it’s amusing to imagine having time enough to read all of them, maybe right here.)

Johnson’s fascination with symbology (and, to some extent, with conspiracy) turns up again in the show’s most striking individual piece: a narrow banner draped down a blank part of the “studio wall” and onto the floor. Reading it requires a bit of maneuvering, but doing so reveals something else to be explored. In a graphic essay using clean lines and suggesting a blueprint, Johnson presents a lesson on sigils — symbols associated with magic and the occult — particularly their use in corporate logos. Consider CBS’s creepy eye, Time Warner’s spiral eye, the figures on bathroom-door signs.

But during the course of preparing for Centuries of Self, Johnson, who is about to turn 34, found that making drawings, sculptures and paintings wasn’t working. So he changed tack: “I ended up developing this [show] out of thinking about what was important to me and what I thought would be useful to me and to other people.” He adds, “I don’t care if what I make is art or not art.”

Among his drawings on display here are white shapes, graphite images of things that carry symbolic baggage (including an apple, the anarchy sign and the peace sign). The arrangement is also on a card you can pick up from a stack on the corner of the desk, a do-it-yourself oracle kit that you can take home with you. The back of the card explains that you can cut and reassemble the pattern into a 12-sided die that might help you divine an answer to some question or problem.

As in the sort of role-playing game that requires such dice, Centuries of Self provokes interaction among perspectives. Johnson has created a game space here, a physical manifestation of the artistic mind. And he’s challenging the presumption that art is (as he puts it in an e-mail to me) “a game of trying to forget one’s self in order to enter the mind of the ‘genius artist.’ “