At the Dolphin, Mike Sinclair sees a City Beautiful. 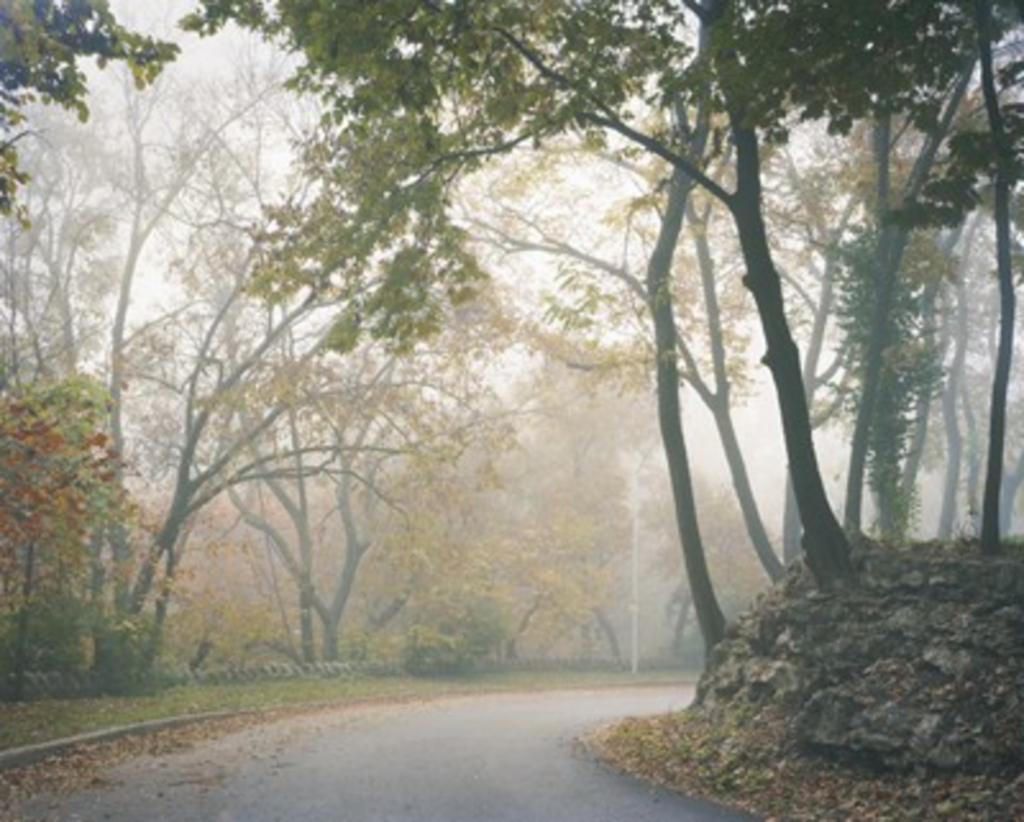 Sinclair borrows his title from American social history. The City Beautiful movement — out of which modern urban planning emerged — engaged architects and municipal leaders in the beautification of industrial America at the turn of the 20th century. They were responding to a nation that had expanded too rapidly, haphazardly and unattractively.

Sinclair is well-known for his photographs of Midwesterners congregating at fairs and other public places, but the best of these images are unpeopled and rely on the land to speak for itself. When people do appear, much of the time they are almost lost in their verdant surroundings. In “Footbridge With Mother and Children, Loose Park Lake,” the three figures are almost invisible, swallowed by lush green vines, bushes and trees, and further pillowed by water. An inverted triangle of gray sky points to this diminutive knot of people. They do not define the land but instead are permitted a small place in it.

Shooting year-round, Sinclair reinforces the comfort that these places offer even in their seasonal abandonment. In “Shelter House, Blue Valley Park,” the intense blue of a retro-style shelter slices open the dense cold of a wintry day. The image is secular and yet seems weirdly sacred, as if Sinclair had found a private, monastic retreat.

Sinclair focuses acutely on symmetry and geometric precision. In “Roanoke Park,” Sinclair depicts a curve in a road that is echoed on one side by a rock wall and on the other side by a layering of leaves, a concrete curb, a stretch of green grass and a low stone wall, pulling us toward the fog-shrouded background. The result is peaceful, calming. In “Rained Out Wedding, Rose Garden, Loose Park,” neat rows of white rental chairs accentuate the rose garden’s formality in a straight shot down the photograph’s center.

In fact, though Sinclair’s sense of balance is evident in all his landscape photos, it crystallizes in the semi-architectural shots. Sinclair examines “Bandstand Pavilion, Swope Park” from inside the structure, facing a corner. The warm, creamy gray of structural order — columns, ceiling, benches, floor — perfectly balances the greenery beyond.

Sinclair’s compositions achieve an almost obsessive equilibrium, but that’s a virtue here. The land in these images emerges as reassuring and stable. The City Beautiful movement helped foster urban order through beauty. At its heart was a simple ideology: Reform the environment, and you reform the people. A century later, in another time of increased middle-class fear and urban squalor, our public spaces — from Central Park to the National Mall to Loose Park — ultimately function to encourage an idealized but undeniable democratic pleasure: civic unity.