At the Dolphin, David Ford tells America to Relax 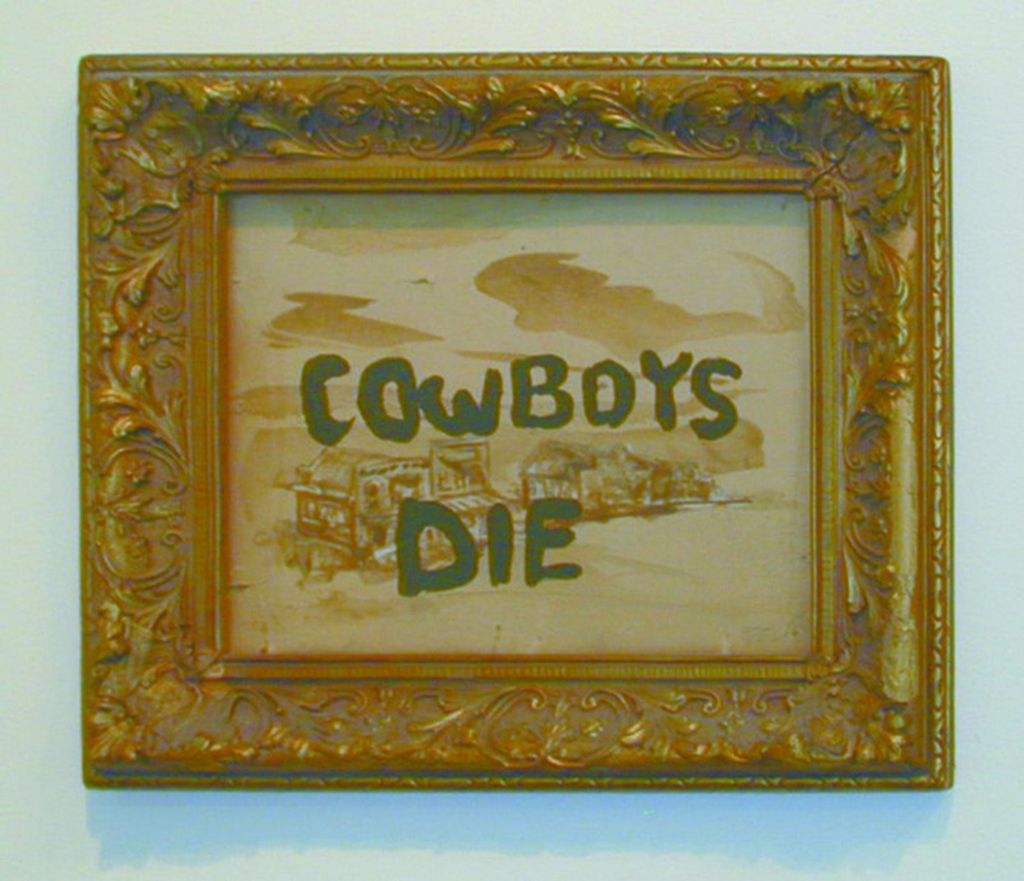 In Relax, an exhibit at the Dolphin gallery in the West Bottoms, globe-hopping, doo-ragged David Ford grapples with consumerism, power, religion and pretty rainbows. Nearly one year into the presidency of Barack Obama, who took as his twin campaign themes an inevitability (“change”) and a scarce commodity (“hope”), Ford appraises the altered American landscape and finds a hot mess of both, and he mixes them up with characteristic ambiguities.

Ford’s acrylic-on-paper works are among the most playful and satisfying in the exhibit. “Relax” is a small painting of a regency-style coach drawn by white horses. Using one of his compositional tropes, Ford paints the title above in dripping, watery letters. “Cowboys Die,” subtitled “The Swagger of Entitlement,” is a pretty obvious knock at the last presidential administration. It depicts the jumbled wooden geometrics of a crumbling frontier town isolated within a broad expanse. In this and the other small works especially, Ford uses negative space brilliantly. He constructs the image with quick, translucent strokes over a vintage sheet of high-acid paper; the phrase “cowboys die” is superimposed over the buildings.

In response, the adjacent wall features an acrylic-on-paper diptych titled “Shine, Shine,” one of several pieces inspired by South African artistic responses to Obama’s election. A limousine stretches across the horizontal breadth of the piece’s two panels, the phrase “shine shine” painted in white cursive across the vehicle’s side panels. Two white stars at opposite sides of the piece give it a symmetrical anchor and echo the small white star on the car’s hood. Ford’s appropriation of the imagery and the phrase is earned; in his wide travels, he has spent time in South Africa. And unlike the neoconservatives who wreaked such geopolitical havoc over the past decade, Ford actually gives a shit what people of other cultures have to say.

Nearby, in a mixed-media sculpture called “Somewhere at Sea,” a painted wooden rainbow spews from the caved-in cockpit of a wrecked plane (in this case, a radio-controlled twin-engine model). He repeats that image — down to the plane’s serial number — throughout the show. It might seem too easy to apply a political analysis to Ford’s ambiguous work. But the piece sits on a dais right next to opposing pieces about George W. Bush and Barack Obama. You can be excused if, in response to a bright symbol of chromatic hope springing from twisted wreckage, your mind jumps to certain conclusions.

In contrast with the simplicity of his small acrylic-on-paper paintings, Ford’s large canvases are complex and decidedly unrelaxed; while the smaller works are conversational and even playful, the large paintings project, if not shout, assertively from the diaphragm. The painting “Charlie Don’t Surf” takes as its title a Robert Duvall line from Apocalypse Now, depicting the same wrecked plane from Ford’s mixed-media assemblage, now airborne, still obstinately emitting its glorious rainbow of hope or whatever. Echoing themes from his 2008 election-night show I Love This Country at the Mercy Seat Gallery, sections of an American flag bleed through the troubled sky that serves as backdrop, and Ford has draped the canvas stretcher with segments of white-plastic chain, another motif throughout Relax.

“Or Fendi Whatever” places familiar fashion logos — Gucci stands out — against a quick, gestural mountainscape guarded by teeth-baring dogs. A row of palm trees recedes to the horizon, suggesting elitist Rodeo Drive consumerism. Ford returns to this theme of privilege and social segregation throughout the exhibit, notably in a sculptural assemblage called “V.I.P.” At the bottom of “Or Fendi Whatever,” Ford has painted the phrase “You Will Die” and then superimposed “We Will Die.” Membership has its privileges, but death has a strict and democratic open-door policy.

Ford suggests that religion does, too. In the first of a pair of large canvases, titled “Tom Cruise,” he places Christian, Islamic, Scientologist, Hindu and Native American iconography on equal footing. Ford takes as a metaphor the so-called “many worlds” interpretation of quantum mechanics, in which all possible outcomes of decisions occur in separate universes, suggesting that disparate religious practices are all objectively correct in different worlds. In “Yes,” perhaps the loveliest of the large canvases in the exhibit, an Islamic prayer rug dominates the painting’s lower half, against a natural landscape rendered in a flushed palette of roseate pinks. The painting’s title appears in the sky in Ford’s characteristic handmade lettering, an affirmation of Islam but also of all the religions that Ford references in “Tom Cruise.”

This cultural openness is innate in Ford’s work, along with a rejection of insularity and a disowning of his country’s idiot retreat into nationalistic bigotry. Another of the exhibit’s repeated themes is the construction and demolition of walls. “Inside Out,” a mixed-media sculpture, depicts a crumbling bunker. Inside, a bronze flagpole-topper eagle has been exposed to the outside world, where, amid cottony clouds of — dust? smoke? — a foreign family waits to greet it. Welcome back to your world, America.