At the cocktail time machine Swordfish Tom’s, Jill Cockson’s focus is on focus 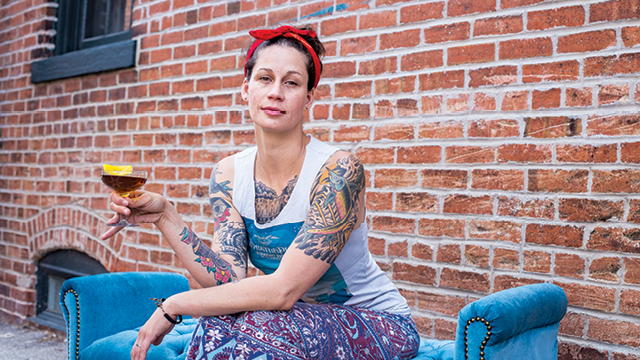 From the drink ingredients to the bygone hospitality flourishes to the industrial-vintage décor, James Beard Award nominee Jill Cockson knew every last detail she wanted to pour into Swordfish Tom’s — and it shows.

Her 30-seat, spirits-only bar, which opens this week in the Crossroads and instantly summons the golden age of cocktails (historians put that roughly between 1860 and Prohibition), functions as a deeply seductive time machine. The martinis and Manhattans and daiquiris taste the way you imagine they did at their long-ago inception, made as they are with what Cockson calls “real” ingredients: premium, fresh juices and herbs, tailored tonics and aromatics. No blue drinks. (Also: no beer and no wine.)

“I believe the future is in smaller, focused spaces,” Cockson says.

When you arrive at 210 West 19th Terrace (in the same building that houses the Sprint Accelerator office), you walk downstairs and into a waiting room. A red light and a green light stand sentry by the door to the bar itself. You can guess what each means. (Cockson, who isn’t taking reservations, estimates that a red light will keep you waiting 10 or 15 minutes.) Enter and a concierge greets you with an overview of how it works: cash only, service just at the bar. You are to silence your cell phone and take no photos; conversation is meant to remain quiet. You imagine a trap door opening under you if you ask for a shot.

Cockson tells me that this isn’t about pretentiousness or intimidation. Nor has she tried to build a better speakeasy. Swordfish Tom’s is simply its own kind of establishment, influenced heavily by her time as managing partner and bartender at Lincoln, Nebraska’s the Other Room (the bar program for which earned her that Beard nomination). She recalls that customers there once told her that, because they had a special-needs child, that were able to go out only a few times a year; that stuck with her, reinforcing her desire to build a sanctuary from the rudeness and clamor that typically accompany high-volume drinking.

“You just never know why people are going out,” she says. “It’s not always for fun. Maybe it’s a friend they never get to see. Maybe they are trying to keep a relationship together and they just need to connect. Maybe there’s a terminal illness. Whatever it is, our job is to provide an atmosphere where they can build memories and share stories.”

Cockson recounts another experience that has shaped her vision for Swordfish Tom’s, a recent trip to visit a friend dying of cancer. “It was kind of the elephant in the room: This might be the last time that I see you,” she says. “So when I was choosing where we were going to go out that night, I wanted to be positive it would be somewhere that we would have a good experience. I didn’t want my last memory of my friend to be some jackass grabbing her ass and wrecking her night.” She found the right place then, and she means to give the same thing to her guests now.

Cockson even does ice her own way. She purchased two Clinebell ice makers, capable of producing 300 pounds apiece of crystal-clear, sculpture-grade ice every two to three days. With the ice from one, she and her staff will cut 2-inch cubes of ice for her bar. With the other, she plans to sell specialty ice to caterers, event planners and maybe even other bars (another definition, perhaps, of hospitality). Most of her focus will remain on the hospitality and drinks at Swordfish Tom’s.

But all of these touches support the drinks, which reveal their own passionate dedication. Topping the menu are four cocktails that center on Colonel Jesse’s Small-Batch Tonics (a line she developed and has been selling for several years). The Loch Ness Tonic, for instance, consists of Hendrick’s gin, St. Germain Elderflower liqueur, Cockson’s cucumber-ginger tonic syrup and club soda. There also are 12 cocktails that will change seasonally, two barrel-aged cocktails and an extensive list she calls “the Manhattan Project.” To her, that classic drink has virtually endless merit. 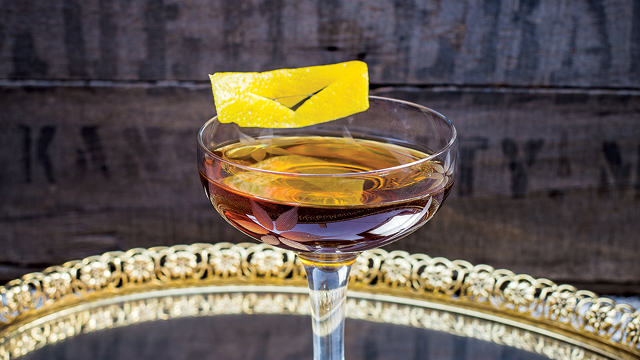 Among her Manhattans are the (Glen)Mo’ Money, with Glenmorangie Quinta Ruban, a house-made port tonic and Angostura bitters, garnished with a branded orange twist; a smoky Mexican version with Del Maguey Vida Mezcal, PX Sherry, Ancho Reyes Ancho Chile Liqueur and spiced chocolate bitters, served with a dehydrated orange wheel; and the War of the Roses Manhattan, made with Four Roses bourbon, Imbue Petal & Thorn Vermouth and Koval Rose Liqueur, garnished with a lemon twist. There are a dozen more.

“I love the template of the Manhattan because you’re always going to have a balanced cocktail so long as you follow the recipe,” she says. “It’s a 2-1-2: 2 ounces of your base spirit, 1 ounce of your sweet or modifier — a vermouth or a cordial of some kind — and then 2 dashes of bitters. As long as you stick with that template, it works.”