At the 403 Club, Dan Myers builds a beast of a bloody mary

The sun is bright and heavy on the early Sunday afternoon when I visit the 403 Club in Kansas City, Kansas. But from inside this storied establishment, I can barely make out any evidence of the world beyond, just a few slivers of light straining through the blinds. The eight pinball machines lining the back wall blink coquettishly, waiting for someone’s hands to grip them. The small bar’s 10 stools are nearly all claimed, with bartender Dan Myers taking care of business during his one weekly shift at this final-outpost dive. (His regular gigs are at Westport’s Port Fonda and Ça Va.)

I squeeze in at the edge of the bar and observe Myers. He’s wearing a distressed jersey promoting the Police’s 1982 tour. The sleeve tattoos on his forearms snake to his hands, and nearly every finger is blessed this Sunday with a chunky silver ring.

Myers knows why I’m here. As he pours me a beer, we discuss our mutual interest: bloody marys. Myers can claim a long love affair with the hangover classic. I, on the other hand, have always written it off as a salad in a glass. He’s confident that he can change my mind.

“Are you hungry?” he asks as he pulls out a Minsky’s to-go menu from behind the register. He hardly hears my response over Bob Marley’s bleat over the jukebox. Soon, a delivery guy will drop off a little Styrofoam mountain, from which Myers will strip-mine a buffet of deep-fried treats.

When that’s done, he finally picks up his cocktail shaker.

His recipe doesn’t appear to be anything out of the ordinary: rail vodka; a bloody-mary mix, ordered by the box; Tabasco sauce; Worcestershire sauce (which Myers calls “gentleman’s sauce,” for ease of pronunciation). But he has obviously learned a few secrets in his three and a half years’ worth of Sundays at the 403.

“Our mix isn’t amazing,” Myers admits, holding up a bottle of the standard Mrs. T’s. “But I doctor it up, and I don’t use a lot of it — less than most people, probably. Equal parts mix and vodka.”

In this case, though, he has put the mix with tequila. And now he’s pulling ingredients from all corners of his small space, digging through sauces and a row of spices, adding a dash of Sriracha, a pour of Stone Brewing’s Spröcketbier (a Kölsch-style black rye). He shakes all this over ice, then strains it into a pint glass dusted with a mix of celery salt and pepper. There’s ice, and then come the garnishes: pickled okra, a fried mushroom, an onion ring, a toasted ravioli, a cucumber slice, a giant Minsky’s meatball, a chicken wing. This is a monster of a drink.

“She’s a little top-heavy,” Myers says. At this point, the entire bar is rapt, watching the bartender’s Frankenstein experiment. And he’s not done. He unearths a mason jar filled with what appear to be eyeballs.

“I found this jar of these tiny pickled quail eggs at a truck stop in Texas last week,” Myers says, carefully arranging one milky piece. “I was like, ‘Oh, my God, look at these quail eggs! I have to have that.’” 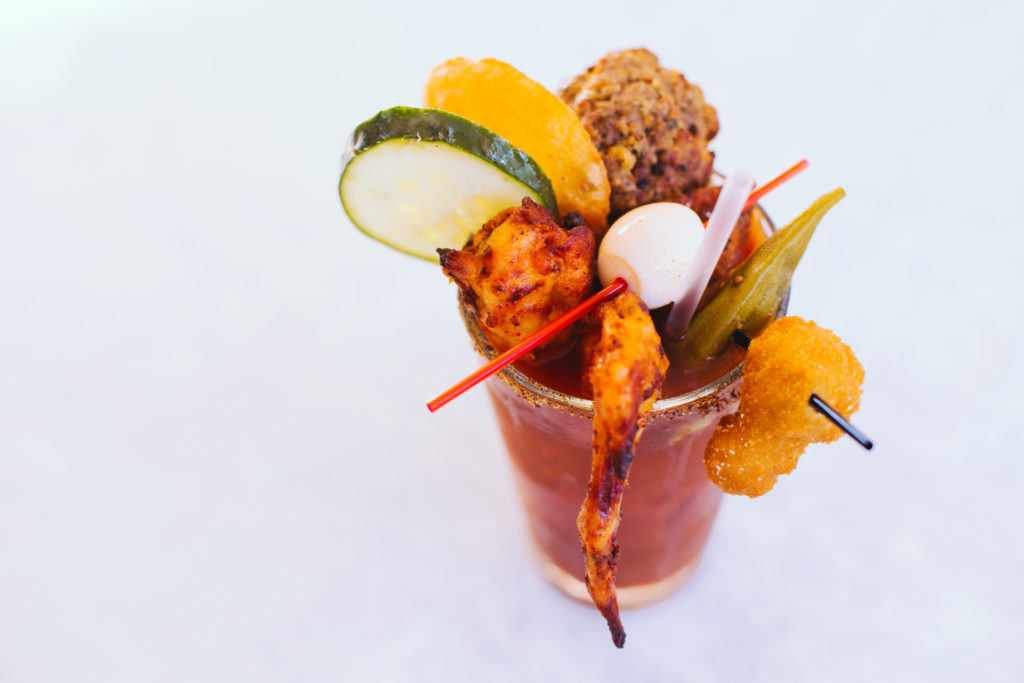 Before I can even take a sip, the other patrons are clamoring for their own little monsters. I feel bad for Myers, who must now re-create this drink en masse. He seems not to mind.

“Everybody wants to do the best bloody-mary bar, but sometimes when you present somebody with too many options, they fail,” Myers tells me later, when things have calmed down. “Like, ‘Oh, I like all this stuff, why doesn’t it work together?’ I mean, this is different, because all this shit is rad — like, where do you go where there’s a bloody-mary buffet that has meatballs and hot wings on it? But sometimes I think it’s just cool if you trust your bartender.”

The trust has paid off. I have sampled my share of bloody marys, each time wishing I could join those among my friends who swear by it as a hangover cure. At long last, it looks like I may have found the one for me. Is it just because Myers has assembled this gauntlet of garnishes? (I do wish all bloody marys could be this thorough.) No. When I finally taste Myers’ concoction on its own, I am sure.

The pepper and spice notes hit immediately on the nose and at the back of the throat, where they pleasantly remain. Typically, I find the standard tomato mix to be too acidic, but the Spröcketbier tempers that, adding just a hint of effervescence. The tequila has a brawny presence; Myers’ decision to use Cazadores Reposado, rather than a blanco, lends a whopping agave note. I approve. His “Bloody Maria,” as he dubs the tequila version — or “Bloody Murphy” with the traditional vodka — is a stunner.

“Initially, I think the term ‘dive bar’ has a negative connotation,” Myers tells me. “But to me, what do I do when I get off work or when I’m not working? I go to bars like this. I get a shot and a beer. Or, if there was something like this, it’s absolutely what I’d get.”

Myers: “Salt the rim of the pint glass with a blend — equal parts salt, pepper, Old Bay and celery salt. In a shaker, pour your ingredients. Shake, strain and garnish as you wish. Highly recommended with spicy chicken wing and a meatball.”