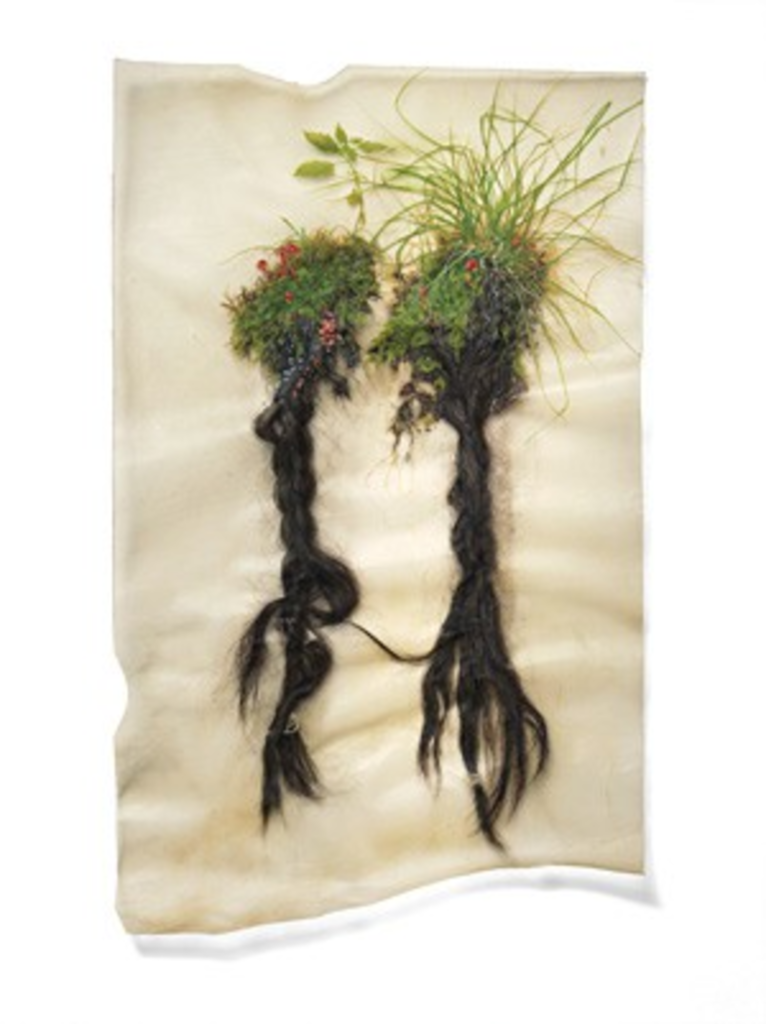 Death, dying, hair, bones — that’s a lot for a two-person exhibition to pack in. But Kansas artist Mary Kay and California artist Rebecca Morales deal with the subjects in ways that are sublime, repellent, chaotic and mostly beautiful.

Death, entropy and parasitic invasions are often represented by grotesque, visually disturbing images designed to galvanize. Some of the work here is indeed creeps-inducing, but more broadly, the exhibit also juxtaposes a naturalist with a fantastical illusionist.

Kay’s paintings on paper and canvas suggest the accumulation in a naturalist’s collection: bones, flower buds, shells, a jawbone with teeth. In “Scat,” a small oil painting on canvas, a clinical lineup of bones floats freely in a built-up, neutral-colored background. The surface of the canvas is rough and dirty-looking, like the dirt from which these bones could have been pulled. It’s one of the lovelier pieces in her collection of works here.

Other paintings, such as “Maw,” in which a large set of teeth seems to swallow up flowers and bones in a chaotic abstract whirl, feel overwhelming and confusing, perhaps purposely so.

Kay’s paintings range from precise and quiet vignettes to pieces that are exuberantly colored and riotously abstract. For this two-person show, the curator might have considered displaying one consistent style in accord with Morales’ presentation. As it is, Kay’s work is underserved by its inevitable comparison with that of Morales, whose paintings on vellum are eerie and uncanny disquisitions on the nature of possession and dispossession.

Morales mainly focuses on saprophytes — plants that don’t require soil but instead feed on dead or decaying organic matter.

That in itself is intriguing, but combining these plant images with hair and knitted images — the plants seem to be feeding on them — allows Morales to dig into broad conceptual terrain. Morales paints in an extreme realist style on translucent vellum that is wavy, rumpled and unevenly cut, lending more naturalism to the paintings. The plants look as if they are actually living on the vellum.

In “Tamara’s Cues,” two braids of hair seem to support (or dangle from) two separate plant clumps. Sprouting vivid green plants and tiny red mushrooms, the messy braids and plants look fantastically real and unreal. The titular “cues” seem not to imply clues but rather “queues” — braids — so we are left to wonder who Tamara is and what has happened to her braids here. How is it that they’ve been co-opted by these parasitic plants?

Morales’ best work seems to glow with intense realism. Mounted on off-white mats, the paintings are simultaneously jewel-like and scientific. Her more recent paintings, however, are mounted on black mats, which completely change the impact. This work seems less real, more fantastical. For example, the hot pink of “Cestodes” heightens rather than lessens the disgusting nature of a tapeworm.

Other Morales works incorporate hair imagery and small knitted objects that are similarly intertwined with the plants. The body, or its representation, is willing or unwilling host to these parasites.