Asim Pasha, making his first public comments in legal filings since his ouster from Sporting Innovations, pinned the blame for his firing on former business partner Robb Heineman on Monday.

Pasha issued a response to Sporting Innovations’ lawsuit filed in June against him, his son and others for allegedly conspiring to form a competing company while purloining trade secrets from the Crossroads-based business.

Pasha says Heineman, CEO of Sporting Kansas City and a venture capitalist by background, never formalized a partnership agreement with the Sporting Innovations firm and became jealous of Pasha’s growing profile in the tech industry.

Pasha’s counterclaim against Sporting Innovations says he put the company on the corporate map, remains the inventor of a crucial patent that awaits approval and wasn’t constrained by an enforceable noncompete agreement.

Monday’s filing reads less like an ordinary legal document and more like a movie script with plenty of rhetorical barbs directed at Heineman and others at Sporting Innovations.

Kirk May, an attorney representing Sporting Innovations, told The Pitch on Tuesday that he hadn’t had an opportunity to review Pasha’s counterclaim.

What follows is a summary of Pasha’s account of what happened at Sporting Innovations.

Cerner executives, who bought the then-Kansas City Wizards in 2006 and rebranded them in 2011 as Sporting Kansas City to coincide with the opening of a new stadium in Kansas City, Kansas, picked one of its employees, Pasha, to develop various technological bells and whistles at Sporting Park.

Pasha’s ideas for Sporting Park, namely a wireless Internet network and a mobile phone app for fans, bucked the attitudes of most professional sports owners who wanted fans’ eyes glued to the games in front of them, not the phones in their hands.

Those ideas became marketable, so Pasha and Heineman decided to form Sporting Innovations. Heineman told Pasha that the two of them would each own 20 percent of Sporting Innovations, while OnGoal LLC, the business entity of Cerner’s that owns Sporting KC, would own the remaining 60 percent of the company. Various documents reflect this arrangement, including an application for Missouri incentives to put Sporting Innovations in the old Hannah Rubber building at Truman Road and Baltimore Avenue.

Despite those records, internal Sporting Innovations documents that would memorialize the ownership structure never made their way into Pasha’s hands. Pasha says he would ask Heineman about the status of such paperwork, which Heineman insisted was on its way. What’s more is, Heineman apparently promised to sign half of his ownership interest in OnGoal over to Pasha, a move that would result in both men ultimately having a controlling stake in Sporting Innovations.

Heineman wrote this promise on a piece of notebook paper, which Pasha’s lawyers reproduced in legal filings. 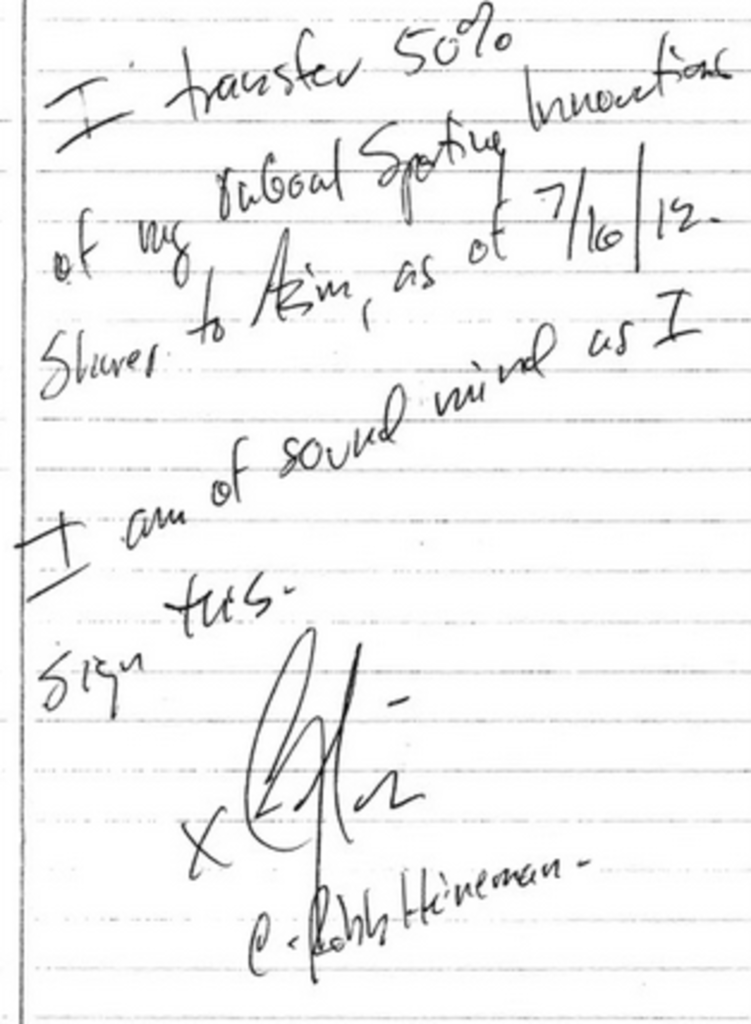 In 2013, Sporting Innovations hired Pasha’s son, Zain Pasha. The elder Pasha says he tried to keep an arm’s length from his son’s hiring at the firm to avoid conflicts of interest.

Later that year, Pasha appeared in the pages of Sports Business Journal’s list of “50 Most Influential People in Sports Business.” Pasha ranked No. 49 on the list, ahead only of Russian President Vladimir Putin.

Pasha claims that this distinction tarnished his relationship with Heineman, who would have preferred to have that accolade to himself.

“What should have been a highlight of Asim’s career to that points turned into a nightmare, for Heineman — displaying petty jealousy — was furious that Asim was on the list and that he (Heineman) was not,” Pasha’s response reads. “Heineman stopped responding to Asim’s request to be updated on the status of the membership agreement, and largely stopped dealing with Asim.

Around this same time, Sporting Innovations had trouble finding qualified information-technology employees in Kansas City, so it looked to outsource some of its work. The firm landed upon the Vernalis Group, a New York technology outfit. Another vendor, Kurt Ruf of Olathe’s Ruf Strategic Solutions, wanted to sell Sporting Innovations information from customer databases that his firm maintained. The trouble with Ruf, however, was that his server technology was out of date.

Pasha, Ruf and Vernalist Group decided to form a company called Knowledge Works, which would help Ruf upgrade his technology so that the newly formed company could make use of his databases.

Pasha says Knowledge Works never did any business or made any money after Sporting Innovations rejected its offer.

The following month, Pasha took a few weeks off to get medical attention for his hypertension and diabetes. His son took a vacation at the same time. Pasha says he had concerns about Heineman’s delay in formalizing Sporting Innovations’ membership agreement.

By the end of March, Zain Pasha resigned from the company after his father stopped getting paid. Pasha says he never received formal notice that he had been fired.

Pasha claims that Heineman is using the courts to pressure his former business partner into giving up on his stake on a pending patent that would be important for Sporting Innovations’ business.

Pasha’s version of events is a stark contrast to Sporting Innovation’s claims, which can be read in more detail here.

“[Victorine] is a glorified salesman, undoubtedly regaling potential customers with his stories about being a professional soccer player — including his half a dozen or so concussions,” Pasha’s filing reads. “Accordingly, like many salesmen, Victorine speaks only in glib generalities.”